Good morning, all you small-r republicans and patriots. It’s election day today, yessiree. How are you celebrating this iteration of our grand small-d democracy? Here’s an idea: why not ignore the pundits and the pollsters and the nerds and naysayers, and return to some classic essays from Bafflers past?

First up on our reading list is the most recent salvo, Jim Newell’s piece “The Lying Game.” Remember that guy who shouted out “You lie!” during President Obama’s healthcare reform speech to Congress, and everyone lost their goddamned minds about it? Well, what was less thoroughly reported than Rep. Joe Wilson’s unruly outburst was just how much money he managed to raise afterward.

Here’s Newell, on the power of online campaign fundraising, and the apparent inability of the political press to have an informed conversation about it:

It’s not news that stupidity can advance an American political career. This is, after all, the country that elevated both Warren Harding and Richard Nixon to its highest office. But the case of Congressman Wilson showcases something new, both within our body politic and in our brave new digital culture: the magical Internet, once touted as history’s greatest boon to democratic accountability, is now manufacturing national political brands, and the fundraising clout that goes with them, for confirmed morons.

In that same issue, no. 21 (published in 2012), Ana Marie Cox wrote a first-person reflection on the role of cable news punditry at election time. “Cable news ratings peak during an election season, and networks add as much political content as possible to capitalize on the nation’s always fleeting interest in the process. The demand for pundits increases along with that interest,” Cox writes. “I know because I’m one of them.” Read the rest of “Face Value” here; it’s sharp and it’s candid, and you’re sure to like it, whether or not you own a television.

Back in no. 17, in the halcyon days of 2006, Thomas Frank’s salvo “The Gilded Mean” explored the very baffling ideal of centrism in American politics. He starts off by explaining its origins, which can be found in the predictable thought process of a every new “politely liberal” recent college grad coming to Washington to engage in politics:

Partisanship, he or she will quickly learn, is the official taxonomical system of the capital, but it takes our golden youth just a few months to realize that this system is something of a fraud. Having issued everyone a “D” or an “R” on their first day in town, the system expects them to take part as the two political teams join in battle at every level, from intern kegger to impeachment proceeding. On radio, TV, and especially the blogs, the heroes from each side can be seen, fighting day and night in a never-ending slugfest whose brutality is matched only by its pettiness. Blogger D heaps vicious put-downs on Blogger R for failing to find humor in a celebrated comedy routine. Blogger R blasts Blogger D for failing to show equal amounts of umbrage at a variety of outrages. The system is preposterous. It discredits itself almost automatically.

Spectators at Washington’s slowly grinding defamation derby require only a short time to understand what a ghastly waste the whole thing is…. And thus is generated one of Washington’s most persistent literary forms: the young person’s passionate panegyric to centrism.

And way back in the Dark Ages of The Baffler, Rob Boatright wrote about the role of the AFL-CIO in the 1996 races, and vice versa, in his piece for issue 9, “Unions Can’t Buy Elections, but Let’s Pretend They Can.” He wrote:

Labor failed to win back Congress, and given the widespread backlash against the congressional Republican agenda, even in districts where labor played no role…it is difficult to make the case that the AFL-CIO was a pivotal actor in this year’s elections.

But evaluated in other ways, the AFL-CIO’s campaign effort brought a remarkable payoff. For one thing, it instantly snowballed into a massive free advertising campaign that unions would never have been able to afford without the cooperation of the media and their Republican foes. Dick Armey is hardly a popular figure these days, and when he says he wants to humiliate labor, it sets off warning bells for a lot of people who ordinarily don’t give much thought to the subject. What was missed in the media’s post-election coverage is that labor could not buy the 1996 elections, and labor leaders knew it. All that mattered was that Republicans needed a scapegoat, and the media have enthusiastically joined in labor’s demonization. Though it might not sound like it, this is a positive development.

Sorry, is all of this a little too wonky for you this early in the morning, when the rest of the Internet is already crowding your eyeballs with graphs and pie charts and percentages? Why not refresh your brain with “I Can’t Recall: a Walker Update,” a little ditty on Wisconsin governor Scott Walker with original art by Michael Duffy? Here Duffy describes a prank someone once played on Walker:

The truth is Walker was always a trusty lapdog to the oligarchy, transferring the wealth upwards, privatizing resources, globalizing our workforce, and hacking away at “entitlements.” Not long after his inauguration, he took a phone call from a person whom he believed was David Koch, funder of the Cro-Magnon morons and mossbacks of the hard right. The caller was actually Ian Murphy from the Buffalo Beast, doing his best impression of a right-wing asshole.

Believing he was confiding in a fellow nutcracker, Walker said he was considering introducing “troublemakers” into the groups of protesters that had assembled at the state capitol. (A criminal act.) You’d think that getting caught kissing up to Koch of Kansas would embarrass the governor of Wisconsin. Nope.

“I had all of my cabinet over to the residence for dinner. Talked about what we were gonna do, how we were gonna do it. We’d already kinda built plans up, but it was kind of the last hurrah before we dropped the bomb.”—Scott Walker, in a phone call to the fake David Koch.

Enjoy, and go get yourself a sticker. (No, not that kind of sticker. This one.) 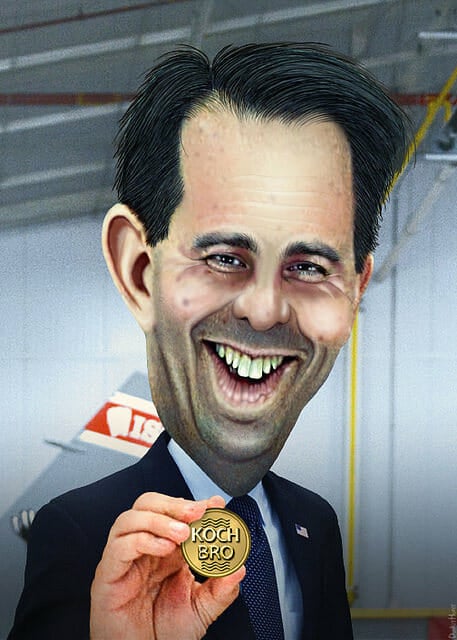 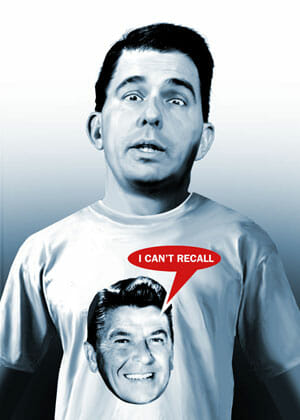 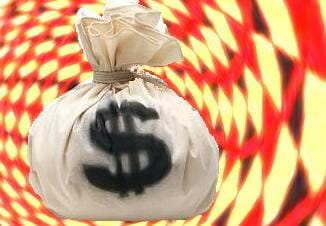