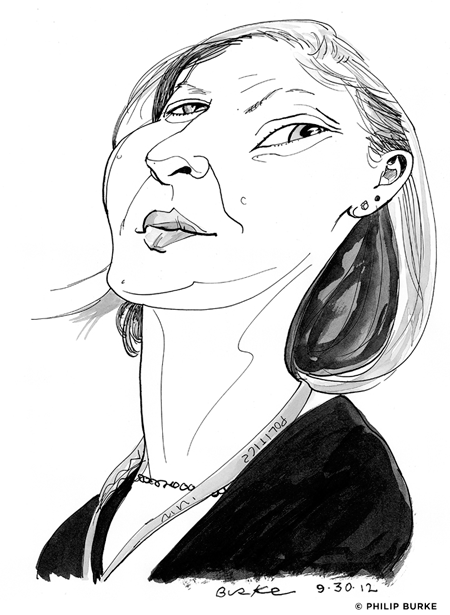 Cable news ratings peak during an election season, and networks add as much political content as possible to capitalize on the nation’s always fleeting interest in the process. The demand for pundits increases along with that interest.

I know because I’m one of them.

In the post-blogging era, the distinction between journalist and commentator, citizen and pundit, has dissolved. There are more opinions than there are people. (Science will have to come up with a new anatomical metaphor for the possession of so many.)

It’s a buyer’s market for news organizations, and I am fully aware that being an entertaining interlocutor with a face that doesn’t break the camera is a factor whenever I get work. Those are the two valuable assets I bring to the table, and when a print publication hires me—at least as I see it, looking back on the last eight years—cable news’ demand for me is part of the decision.

Going on TV makes my print employers happy. It makes me happy, too: it’s a relatively cost-free way of saying to a larger public what I write for my readers. To be completely honest, it’s fun. And the vast majority of the talking heads you see on cable news are doing it for the same reasons I am: it makes their employers happy, and it’s mildly exhilarating, like the rollercoasters you don’t have to be tall to ride. They are not doing it for the money, believe it or not. Only a fraction of the pundits appearing on any given show are paid “analysts.” Most of them are remunerated in more existential terms.

This is the process behind a cable news hit (they are called “hits,” for no good reason as far as I can tell, though I like to think of myself as a journalistic gun for hire). First, a booker calls you the day before in a panic. Bookers are always panicked. I understand that panic. If going on live TV is walking a high-wire without a net, programming live TV is stringing the wire without a net, under a deadline. The show needs you IMMEDIATELY, or, in fact, in about twenty-four hours, but they need a commitment IMMEDIATELY.

“We’re doing a segment on CAMPAIGN THING THAT JUST HAPPENED. Can you come on to talk about it?”

Once availability is established, then you move on to what you’re going to say. “Okay, HOST wants to see if THING THAT JUST HAPPENED is going to CHANGE THE NATURE OF THE RACE. What do you think?”

You can try to offer a nuanced view. A booker in a non-panicked state (maybe they’ve already booked the first person they need for the segment and therefore aren’t haunted by the specter of dead air) may be responsive to a nuanced view. Whatever you say will eventually show up as an extremely condensed sound bite when the host asks you about it, but there’s some payoff to trying for complexity—it could mean that you will get an open-ended interrogatory sound bite from the host.

However, there is also a chance that the booker will tell you, “I need to talk to my producer about this.” That usually means that what you plan to say doesn’t fit into the outline they’ve established for the segment. They ask you about foreign policy, but you want to say that foreign policy doesn’t matter. They want someone to explain why the White House did XYZ, but you think they did XZY. “I need to talk to my producer” isn’t a lie, but given the utter panic of most booking situations, if there’s any chance what you have to say will fit into the segment they envision, then they will start with the car confirmation and date-making immediately.

Yes, the car. I have a love-hate relationship with the car service that comes with doing a cable news hit. Sending a limo to pick you up seems like a big expense for what amounts to five minutes of airtime, but almost everything weird about cable news makes sense if you remember the sugar-high adrenaline rush of making sure nothing goes wrong, no one is ever late, and there are no surprises. They want you to be on time, and so, a car.

The car makes me feel conspicuous, especially in the neighborhoods where I’ve lived the past few years. On the other hand, being driven around by someone can generate a sense of pleasant alienation, a numbness on par with heading to a gangland sit-down: I am different, I am not in control, I am being driven to an appointment that I may not emerge from alive. (TV IS LIFE AND DEATH, remember. Panic.)

At the TV studio, you get makeup. Early on, I thought of objecting under the pretense of false modesty. But next time you watch cable news, think about how distracting it would be if everyone on the screen was airbrushed and sparkly except for that one person with the bad skin and greasy hair. I suppose it’s also the case that to give some people makeup and not others could affect how viewers felt about what they were saying. I mean, maybe.

(Ancillary weirdness about the spray-on makeup most network makeup artists use: it is almost impossible to clean off without a Silkwood shower. This leads to the very Washington spectacle of two badly dressed men sitting down for drinks wearing eyeliner.)

So resisting that tiny compressed-air foundation gun is futile, and after a while you get used to it. Also, the women (yup, usually women) who do your hair and makeup are probably the nicest people you’ll meet in the course of going on cable news, and they’re the ones most likely to listen if you talk to them.

The primary goal of those running a cable news network is to create interesting programming, though that is often in conflict with the primary goal of those booking the segment, which is to avoid surprises. Worst-case scenario is probably when two guests reach an unexpected agreement. Usually, it’s a balancing act: planned disagreement. When I first started being a regular guest on cable, engendering conflict was the rule. Bookers would make sure that my opinion on an issue was opposed to that of the other guest. Sometimes opinions don’t have a clear opposite, of course, in which case, sketching out a stance in shades of gray—the war in Iraq is a catastrophe and we shouldn’t necessarily pull out, sex education for children is a great idea and parents should have a say in it—is a great way to keep the show humming along and to keep your dinner plans intact.

But my opinions aren’t that complicated most of the time. So I’d give the booker my take (often based on having asked people who knew more than me), and usually the booker would tell me the name of the other guest (again, no surprises), and what his (come on, it’s a he) opinion was. I’d then tell the booker my witty rejoinders, which allowed the host to play knowledgeable intermediary. “Guest A, you have a problem with the kinds of solutions posed by Guest B. In fact, you’ve said [THING I SAID]. Is that right?”

But that was years ago. Sometime in the last four years—I think it may have been during the 2008 election—the cable networks I appear on stopped trying to book guests on “both sides” of an issue (because, come on, every issue has exactly two sides, amiright?). Instead, segments now tend to take one side of an issue as the starting point; the role of guests is to work with the host to either build up or tear down that point of view.

To the extent there’s balance . . . well, only one of the networks pretends to be interested in “balance,” and it seems to have decided that balance means putting a big, fat finger on the scale. The other networks aim for the spectacle of polite outrage at what’s happening outside the studio walls: eye rolling as analysis. Though, to be honest, there’s a lot about political campaigns to roll your eyes at.

Outrage is, actually, an improvement—at least no one has to be an on-air punching bag. Selfishly, it’s meant that I’m freed up to improvise within the confined space allotted to me. Bookers still want me to spell out my opinions and arguments in advance, but since I’m not supposed to be directly addressing the ideas of whomever I’m on with, I can occasionally work in a fact that reflects the sometimes fuzzy contours of what I really believe. The downside of this approach is that it’s still not so much a conversation as a series of mini-monologues.

Occasionally, I wonder if this is what viewers enjoy. Twitter often lets me know if I did well, or at least hit a nerve (is there a difference?). But the people who watch cable news and immediately tweet about it are freaks (like me). What constitutes good infotainment for the rest of the nation? I’m worried that the answer is Dancing with the Stars.

Am I insane to think that there’s even a tiny bit of educational value in the discussions we have on cable news? Because despite all I’ve said, I do believe that. I suppose I have to. If I think about it rationally, there’s probably a lot more to be learned about the state of the American economy in a half hour of Pawn Stars than in any block of dayside news, though it’s also true that you can’t fact-check Pawn Stars while it’s happening, and sometimes you get to say something worthwhile right in the middle of a news event. I often describe my role in the pageantry of election season as “color commentary,” the equivalent of what a SportsCenter anchor does, though probably with less impact.