A few minutes after Neil Gorsuch was nominated to the Supreme Court, former Obama Acting Solicitor General Neal Katyal had an opinion piece in the New York Times. In it, Katyal argues that Democrats should confirm Gorsuch, who is “an extraordinary judge and man.” He also asserts that, despite the GOP-led Senate’s manifest unfairness in denying Obama his Supreme Court pick, Merrick Garland, Katyal has seen Gorsuch up close, and he knows that Gorsuch will bring “a sense of fairness and decency to the job, and a temperament that suits the nation’s highest court.” And since his nomination, Gorsuch himself has talked endlessly about the solemn civic responsibility that any judge assumes when he or she puts on the robe, and what that symbolic gesture means.

But whether Gorsuch is a decent man, and whether Obama “deserved” a Supreme Court pick is beside the point. The fate of our rights as citizens, workers, patients, and businesspeople is the core question. And what this highly choreographed, deferential song and dance revealed is that an insular clique operates our machinery of governance, one that stretches across both parties, and that on the critical issue of unaccountable concentrations of power, legal elites in both the Democrat and Republican parties stand with big finance.

Since long before Citizens United or Bush v. Gore, the Supreme Court has been a disaster for democracy. The influence of Robert Bork and the Chicago School of libertarians has been undermining the rights of Americans in the economic and political arena since the late 1970s. In 1978, the court effectively struck down state usury limits with the Marquette decision, leading to the modern credit card industry and a massive spike in personal bankruptcies. To understand how fundamentally counter-democratic the impact of this decision was, consider that a usury limit was actually one of the first laws that many states passed when they formed themselves as states. In one fell swoop, the high court overturned the democratic underpinnings of the American political economy.

In 1977, the court began striking down the ability of the government to enforce antitrust rules on any but the narrowest of grounds. It hasn’t stopped since, and the high court’s allergy to antitrust is not a legal doctrine that’s an exclusive conservative franchise. The Trinko decision in 2004, which government lawyers have routinely cited as the precedent enabling them to shun the prosecution of any monopolization cases over the past fifteen years, was a unanimous ruling. The result of the court’s rulings on the concentration of economic power since the late 1970s is a corporate cartelization of financial power unrivaled since the robber baron era.

It’s vital to recognize that, when it comes to the legal ratification of political-economic power, it often doesn’t matter whether a justice was nominated by the Democrats or the Republicans. Both Ruth Bader Ginsburg and Stephen Breyer are acolytes of extreme conservative jurist Bork on antitrust, and joined Scalia’s majority opinion in Trinko.

Elite justices on the court have often had a fondness for concentrated power and a tendency to stand against democracy.

Breyer also wrote the opinion on a key 7-1 decision on the use of discounts to concentrate power. Despite the Beltway lamentations you hear over how bitter Supreme Court confirmations have become, the confirmations of Breyer and Ginsburg were quick and painless because they were supported by big business. More recently, the court helped rule in favor of destroying Puerto Rico’s economy for the benefit of the territory’s hedge-fund creditors, in a 5-2 majority ruling joined by Breyer and Kagan. Alito recused himself, which meant that the final ruling was the handiwork of a Democratic high-court majority. But as they say, possession is 90 percent of the law—and so the pro-hedge fund majority eclipsed the nominal liberal majority in this case.

From Jefferson’s day into the middle of the twentieth century, Democrats understood that elite justices on the court have often had a fondness for concentrated power and a tendency to stand against democracy.

And one doesn’t have to look too widely in the annals of modern liberalism to find pointed critiques of the high court’s fealty to the money power. Robert Jackson, the solicitor general under Franklin D. Roosevelt and later a justice who heard Brown v. Board of Education, complained about the American Bar Association and the lack of legitimacy of the court should it prove unyielding to the needs of a democratic society. Jackson even argued against law schools, saying they produce too many unethical lawyers seeking business, rather than lawyers with ethical safeguards protecting their communities.

Ferdinand Pecora, who was a judge after he was the scourge of Wall Street, mocked the idea that wearing a robe gave someone special wisdom and singled out for special ridicule the Supreme Court justices who had lauded the virtues of Wall Street before the 1929 crash. Thurgood Marshall resented the Harvard elites from whom he was excluded, and recognized that a legal elite could be as destructive as any other out-of-touch apologist for racial or political privilege. And during the New Deal era, Congress was willing to investigate problems in the judiciary when the courts thwarted democratic attempts to redress widespread economic collapse.

Since the Bork confirmation hearings in 1987, many top legal professionals—from both parties—have preferred not to talk honestly to the American public about the nature and scope of legal power. Bork was actually willing to have a debate over his ideas, and the Senate blocked him because the Senate majority did not agree with his anti-democratic understanding of the Constitution. After Bork’s nomination was voted down, the legal profession settled on the norm that nominees shouldn’t tell the Senate what they thought about anything. So while everyone knew that John Roberts was lying when he said he’d just call balls and strikes, that a judge was an umpire, that he’d respect precedent. Citizens United was his big reveal. In that disastrous ruling, he pulled off his Scooby Doo villain mask to reveal that under his slimy corporate lawyer exterior he was a slimy corporate lawyer.

The good news here is that the public is getting wise to this game, and so are Senate Democrats. When Gorsuch testified before the Senate Judiciary Committee, he tried to emulate the same studiously noncommital persona that Roberts adopted for his confirmation hearings. He wouldn’t answer questions, and said “gee golly Senator” at every opportunity, not realizing that it’s actually the year 2017 and that no one even said things like “gee golly” in the 1950s. He was, in other words, a bad actor. And even though many reporters were fooled, and wrote that Gorsuch had emerged “unscathed” from his hearings, Senate Democrats weren’t. Aside from Colorado Democrat Michael Bennet, who was on the payroll of the same secretive billionaire—Phil Anschutz—who also owns Gorsuch, and a few very red state Dems, there will be a filibuster. If McConnell chooses to put Gorsuch on the court anyway, and the Republicans agree, good.

It’s time for citizens to demand that Congress stop kow-towing to the legal establishment club and use their own power to reshape the Supreme Court to serve American democracy. Nothing in the Constitution prevents our making the Supreme Court a panel of a hundred judges, so that offending one wouldn’t be a big deal. Nothing prevents forcing the sitting judges to ride circuit all over the country, so that a Samuel Alito or Clarence Thomas couldn’t just sit in D.C. and radiate power outward to parts of the country they never see. Nothing prevents Congress from putting televisions in the court, so that Americans can watch the people who are making crucial decisions that affect—and curtail—their rights. Nothing prevents Congress from investigating the judicial junkets that the justices now soak up, such as the luxury hunting trip funded by wealthy interests that Scalia was savoring when he died. Nothing prevents the executive branch from indicting Clarence Thomas for taking a half a million dollars in bribes undisclosed through his wife’s relationship with right-wing think tanks (yes, he did this, and yes, the Obama administration did nothing about it). Nothing prevents Congress from simply limiting the jurisdiction of the court, and exempting key laws from judicial review should the court thwart the obvious needs of a democratic society.

None of this should be done lightly. Congress needs to make a case, a very public one, that the court is standing against the needs of our democracy, before embarking on the reformist options embedded in the Constitution. But fundamentally, Congress needs to recognize that the Supreme Court is a political institution and is shaped by politics. If Senate Majority Leader Mitch McConnell is willing to subvert norms to seize power on the court, the strategy can’t be to wait forty years until Gorsuch is gone. It must be to reclaim the court for American democracy. And that means understanding that the court is actually susceptible to public opinion. The justices are at the end of the day simply politicians, and the Constitution is a very flexible document. If the public starts to demand that the Supreme Court serves democracy instead of concentrated financial power, it will do so. The question is whether Democrats will lead the American people in that direction.

Matt Stoller is a fellow at the Open Markets Program at New America. 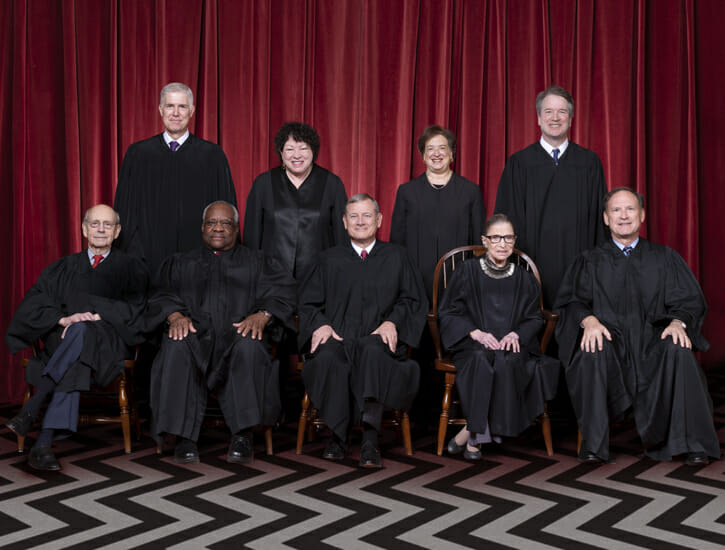