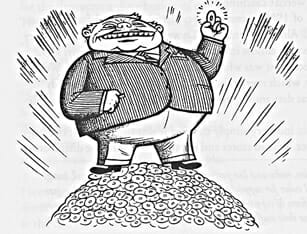 What’s a music industry to do when its new crop of rebels just aren’t convincing enough to obsolete the old?

Such was the situation in the early eighties, when sales of vinyl, cassettes, turntables and cassette players were “flat.” Granted, music sales weren’t falling, but for the manufacturers of our culture that wasn’t quite good enough. They needed a new angle. A new way to sell music and the stuff you play it on. Luckily, someone at the Phillips Corporation (owner of PolyGram Music and Island Records and one of the world’s top defense contractors) had the bright idea of introducing not merely a new style, but an entire new format complete with a new machine to play it on. This was a strategy that had been tried before, with the introduction of the 45, the LP, the cassette tape, and the 8-track; it didn’t always work, but when it did the payoff was enormous. A change in format promised an answer, for example, to that long-vexing industry question: how can you sell that aging baby boomer a copy of “Deja Vu” by Crosby, Stills, Nash, and Young when they already have one?

Thus was born the compact disc in all its shiny, digital, plastic, and aluminum glory. Its maximum playing time, about seventy-five minutes, was chosen because the president of the Phillips company wanted something that could play his favorite piece of music, Beethoven’s 9th Symphony, all the way through without stopping.

At first compact discs weren’t too successful. For one thing, their price was far too high, due to the facts that they were mostly being made in Japan and that they had a high defect rate, with approximately one out of every three discs being tossed out before even leaving the CD factory. Early on, these problems led to an industry-wide decision to continue paying recording artists a royalty rate based on the $8.98 or $9.98 list price of vinyl (or achieved the same end result by using contractual tricks like “packaging deductions”) instead of the higher sale price of compact discs. And nobody was buying those new CD players either, because they were just too darned expensive. CDs just weren’t catching on.

But then, in the spring of 1989, something wonderful happened for the music industry. Everything changed! Almost overnight, CDs were everywhere! Suddenly they were a huge success and it became almost impossible to get anything on vinyl at all.

This must have been because it was what the consumer wanted … right? We live in a market-driven economy, which every schoolkid knows is synonymous with “democracy,” and the market was demanding more of those excellent, highest-possible-fi compact discs … right?

Hardly. In fact the music industry simply decided it was time to back the flagging CD revolution with force. Record stores and the seven major music distributors had long agreed on a flexible return policy—i.e., stores could “buy” something from a distributor, and if it didn’t sell, they could return it. This allowed stores to take more chances on new releases or on things they were not familiar with, because if it didn’t sell, they could always send it back. But in the spring of 1989 all seven major label distributors announced simultaneously that they would no longer accept returns on vinyl and they also began deleting much of the vinyl versions of their back catalog. These actions literally forced record stores to stop carrying vinyl. Record retailers could not afford the financial risk of carrying anything that was on vinyl because if it didn’t sell they would be stuck with it. Very quickly record stores had to convert to CDs. Now the consumer no longer had a choice because the choice had been made for us: high priced compact discs were being shoved down our throats, whether we liked it or not.

As CDs took over, as the majors all acquired their own domestic CD pressing plants, and as the defect rate dropped to almost zero, the cost of manufacturing compact discs dropped dramatically as well. One would have expected the price of CDs also to drop and for the profits now to be split evenly and fairly with the musicians who were making all the music.

This, of course, never happened, and herein lies the genius of the CD revolution: costs are now both higher for consumers and lower for record labels. CD prices have continued to rise to a now unbelievable $16.98 list price (soon to be $17.98!) while manufacturing costs have now dropped to less than it costs to manufacture a $9.98 vinyl release. A CD, with its plastic jewel box, printed booklet and tray card now costs a major label about eighty cents each to make (or less) and a small independent label between $1.50 and $2.50. CDs should now cost the consumer less than their original prices over a decade ago, not more. But apparently consumers got so used to the idea of paying the higher price (and the labels got used to the idea of their higher profit margin) that nobody ever complained. And the musicians? Why, they’re still paid royalties to this day that are based on the list price of vinyl. That extra four or five or six bucks goes right into the pockets of the record labels. It is not shared with musicians. And of course, we all had to go out and buy CD players if we wanted to hear any of the music on this “popular” new format. In the following year, 1990, when our economy was in a recession, the music industry had its biggest profits, ever!

And why have you never heard about any of this and why was no antitrust action ever taken against major labels and distributors? Simple: most of the reporting on the inner workings of the record business appears in the music press and the music press is almost totally dependent on the advertising dollars and good will of the business that they’re writing about. Since not even the most hardened journalist wants to “rock the boat” or anger the folks who bankroll their publishing ventures, this story went, and will remain, unreported.

So what’s next? How can they get you to buy another copy of your favorite Pearl Jam release when you already have it on CD? Don’t worry, they’ll come up with an answer for you soon.