To no one’s surprise, Spotify, in recent years, has taken to hiring social media influencers to shill its broken music model. Across its various geographical markets, the fifty-billion dollar streaming company has employed marketing agencies to work up different schemes. Some of this influencer advertising can be found tagged #SpotifyPartner on Instagram. Another example would be a campaign titled “A Playlist for Every Mood or Moment,” developed in a partnership with Viacom’s marketing arm, wherein the media giants enlisted the English actress Sophie Turner to promote Spotify through her Instagram stories.

Spotify has also paid micro-influencers through an Australian agency called Tribe (which claims to “help brands connect with micro-influencers at scale, speed, and a fraction of the cost”). For one campaign, titled “The Future is Spotify,” they asked micro-influencers to post content evangelizing the app as superior to old physical formats like CDs and cassettes. For campaigns like these, the client might send reference photos for the kind of post they want micro-influencers to create; micro-influencers set their prices and submit suggested posts, then the brand approves the ones they want to pay for. A reference image that accompanied this particular campaign depicted an iPhone with Spotify pulled up next to a stack of CDs and three unspooling cassette tapes labeled MEGA MIX, MIX TAPE, and OLD SKOOL 90S. Tribe claims this campaign generated 22,921 likes and comments, with an average cost-per-engagement of $0.14. With twenty-four posts total, some rough math estimates that it might have cost around $130 per post.

What if, instead, Spotify just got people to do this stuff for free? That is the basic premise behind the Spotify Wrapped campaign: it’s free social media advertising for Spotify. The campaign began with annual personalized playlists; then, in 2017, Wrapped asked listeners to “be brave enough to share [their] listening history,” allegedly leading to five million social media shares. Now, every December, the company sends users automatically generated, Spotify-branded graphics summarizing their listening habits, like top-played songs and artists. They also send these graphics to musicians in the form of scorecards indicating their yearly numbers: how many streams and listeners they amassed, what countries they came from, and more. And every year, like clockwork, they fill social media feeds for days, giving Spotify its biggest social media marketing push of the year. Wrapped also typically incorporates a yearly billboard campaign, where user data is used as material for ads plastered on city streets and subways around the world.

It is worth remembering what you’re advertising when you are doing advertising for Spotify.

The two different types of Wrapped scorecards serve as one way of understanding how Spotify sells itself to investors. The company has repeatedly spoken of itself as a “two-sided marketplace.” On the one hand, Spotify sells its product to listeners, who it hopes will become paying subscribers. On the other, Spotify sells itself to musicians and labels, who it sees as a different type of customer. It hopes musicians will continually provide the devalued work that fuels the platform, yes, but increasingly, Spotify is also banking on the unlikely reality that they might become paying customers of promotional products, too. In any case, Wrapped is Spotify’s way of obtaining free advertising from all sides of its business model. Last year, Spotify’s head of consumer and producer marketing, June Sauvaget, told Forbes that Wrapped, “creates this FOMO effect that happens and that inherently entices new users to consider Spotify.”

It makes perfect sense that a company whose product is fully built on exploited labor would scheme new ways to squeeze more uncompensated value out of its varied user base. To that end, it is worth remembering what you’re advertising when you are doing advertising for Spotify. And that is: a publicly traded corporation with a fifty-three billion dollar valuation that’s only responsibility is to its stakeholders, who are largely investment management firms and major labels (who reportedly make millions per day from streaming). According to a report on Spotify’s institutional ownership, as of June 2020, its major shareholders include the company’s founders Martin Lorentzon and Daniel Ek, as well as the multinational tech conglomerate Tencent Holdings Ltd., venture capital firm TCMI, Inc., and investment management firms Baillie Gifford & Co., T. Rowe Price Associates, Inc., Morgan Stanley Investment Management, Inc., Morgan Stanley Asia Ltd., and Tiger Global Management LLC. That’s just a look at the top ten. Sony and Universal are also partial owners.

Whether online advertising even works is a worthy question being asked more and more in various contexts this year. But setting these concerns aside, there are additional issues raised by the annual tradition of convincing musicians and music fans to compare stats publicly as if there is something meaningful to be gleaned by the process.

The Wrapped campaign is a yearly reminder that the streaming model is one that relies on play counts as its core value metric. But in music communities, whether a song is played on repeat for days is not reflective of an artist or a record’s value. The Wrapped campaign suggests that a work’s value increases as it scales, something that is plainly false when it comes to art. As one full-time advocate for musicians, who wished to remain anonymous, succinctly put it in the past: “Spotify wants us to share these metrics because it low-key encourages us all to think that these metrics are valuable or meaningful. These numbers say nothing about sustainability or accomplishment. Play count as proxy for value is toxic.” These problems will persist within any system that views music merely as a commodity to be squeezed for profit instead of as a public good.

Earlier this year, during a conversation I had with Holly Herndon and Mat Dryhurst for their Interdependence podcast, Herndon also spoke to this point, rejecting a per-play valuation of music, pointing out that the number of times you replay a record does not necessarily correlate to the impact it has:

For me, the most important music which has shaped me as a person and as a musician myself is not necessarily music that I listen to on repeat. It’s music that contains an idea that I really just needed access to, like a book or a really good movie. I needed access to that idea to open up a new perspective on the world . . . I think this will always be a fundamental flaw in the per-play model. And [the  model] works to further marginalize music which has a different value metric at its core. For example, Penderecki’s Threnody to the Victims of Hiroshima is not easy listening. It is not something that I am going to put on repeat. Whereas something like Pure Moods, 90s chill music, is something I can have on in the background. Both are valuable, just in different ways. Easy to listen to music has historically been easier to monetize because it reaches more people, which is also fine, but that was balanced by people being able to spend twenty, thirty dollars on an LP or CD, to access music which didn’t belong in the background. To access the idea, or to experience a complex emotion that doesn’t need to be experienced all day.

If we accept the idea that the number of streams a song or an artist is able to amass is a valid way of determining what is important, we are significantly limiting the scope of sounds, voices, and emotional responses that are deemed valuable within music and culture. Do we want a publicly traded tech company, whose only responsibility is to make returns to major labels and banks and investment firms, setting the terms of how value is decided across all corners of music? And do we want these financial forces wrapped up in another task of this yearly campaign: labeling and bolstering Spotify-created so-called micro-genres?

In one of its own promotional videos, Spotify splashed a quote from an Atlantic piece celebrating #Wrapped, which called it, with disturbing sincerity, “a masterful coup of free advertising and consumer trust when our faith in tech companies is historically low.” This video was shared on the website of an advertising award that nominated Spotify for this campaign—they have received a number of advertising awards for Wrapped.

What if we decided to reject this “masterful coup of free advertising” and instead chose to collectively admire all of the different ways, besides the shallow value of play counts, that music has contributed to our lives and to society this year? 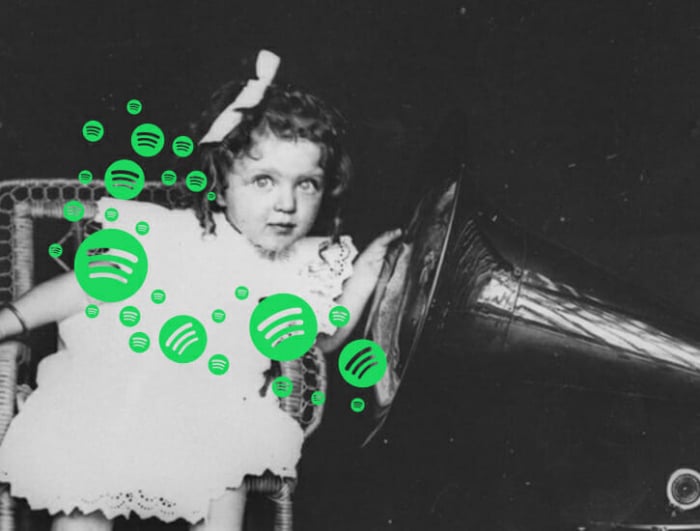