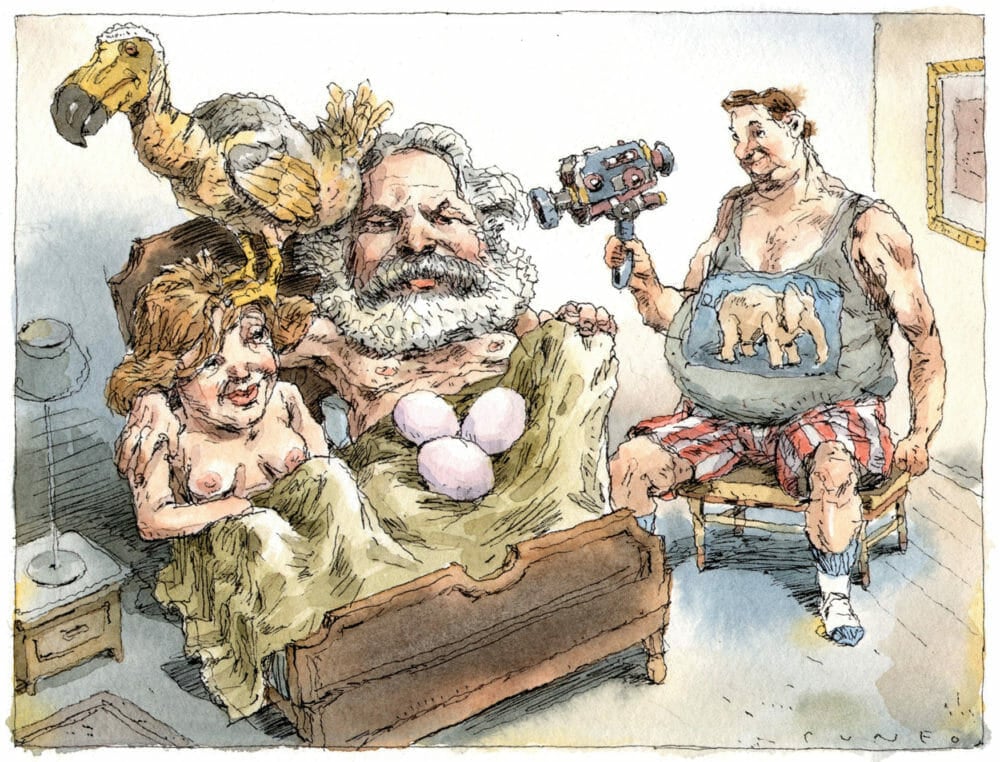 A few months ago, the media class became fixated on a vulgar little portmanteau. Talking heads of every political orientation served up their piping hot takes on what Dave Weigel at the Washington Post christened “the conservative insult of the month”: cuckservative.

At Salon, Joan Walsh professed her shock and disgust at the coinage, thanking The Daily Caller’s “mild-mannered, clean-cut conservative writer” Matt Lewis for bringing its ugly genealogy to her attention. Lewis claimed the first half of the word comes from the “cuckold” genre of pornography, wherein a black man has sex with a white woman while the performer playing her white husband watches ashamed, titillated, or both. In this context, the slur implies a “race traitor.” Over at The New Republic, Jeet Heer corroborated this usage and expounded on the term’s disturbing undercurrents of psychosexual racism under the too-clever-by-half headline “Conservatives Are Holding a Conversation About Race.”

Not long after the first wave of cuckservative commentary washed over the servers of the left-leaning Internet, the sheer spectacle of liberal agita over the expression attracted the attention of more respectable outlets of debate. The Columbia Journalism Review dove into an intensive etymology of the term. (Did you know that The Oxford English Dictionary informs us that “cuckold” likely came from “cuckoo,” a bird that lays her eggs in another bird’s nest?) Even the venerable Gray Lady, though reluctant to broach the topic of pornography, felt obligated to translate cuckservative to her readership, unfortunately covering it under “Politics” and not, as I had hoped, in the Style section.

As cuckservative went more or less mainstream, most conservative pundits scrambled to distance themselves from it, which makes sense, since it wasn’t doing much to enhance their standing in a presidential election cycle (and since conservatives, as we know, are traditionally averse to both pornography and obscenity). Erick Erickson at RedState denounced the word, calling it “a slur against Christian voters coined by white supremacists”—a condemnation echoed by Matt Lewis, the aforementioned “mild-mannered, clean-cut” sociologist of porn. It’s a fantastic feat of mental gymnastics to twist the cuckservative affair into fodder for a Christian persecution complex, but it’s hardly an unprecedented move for white commentators on the right. After all, many talking heads initially treated the recent massacre of black church parishioners in Charleston, South Carolina, by white supremacist Dylann Roof as a secular assault on a Christian house of worship.

Even Rush Limbaugh, who is credited with shepherding the word into mass usage on the right with his July show “Trump Was Supposed to Be Gone by Now,” didn’t actually say the word “cuckservative” in his rambling, self-congratulatory appraisal of The Donald’s tenacity:

This is only Wednesday. Trump was supposed to be history by now. And it was your host, El Rushbo, who said, “Whoa. Put the brakes on it, here. Wait just a second. We don’t know this yet, ’cause Trump’s not playing by the rules.” If Trump were your average, ordinary, cuckolded Republican, he would have apologized by now, and he would have begged for forgiveness, and he would have gone away. And the establishment would have claimed another scalp, claiming that they had protected the sanctity of campaigns.

As far as I know, the only high-profile conservative who went to the mat for cuckservative was right-wing novelty act and gay Catholic Breitbart scribe Milo Yiannopoulos. He presumes that since he has “literally taken black dicks in the ass,” his careful analysis of the theoretical racial dynamics at play afford him a sort of Standpoint Theory expertise—the kind of intellectual authority granted only by personal experience. (He also declared earlier this year that “Gay Culture Is Dead.” Evidently he failed to consider that maybe he just isn’t being invited to the good parties.) Yiannopoulos further argued that cuckold and cuckservative are not racist terms because they were popularized not on Stormfront or in some KKK chatroom, but in that bastion of postracial enlightenment, 4chan, which, as it turned out, played no small role in Roof’s radicalization.

These lackluster defenses and strident rebukes of cuckservative from the right line up rather awkwardly with the eager forensic studies of its deep psychology on the (notional) left. It appears that right-wing allegiance to the term is not quite so robust as liberal commentators would have it. And concurrent usages across the political spectrum show that cuckservative may be a case of “multiple independent discovery,” the phenomenon of two or more distinct parties developing innovations nearly simultaneously.

For example, Benjamin Franklin is credited with inventing the lightning rod. But at around the same time, in the Kingdom of Bohemia, Czech scientist and theologian Prokop Diviš created a machina meteorologica of arguably superior design—albeit in a comically ambitious attempt to control the weather. Diviš appears to have built his lightning rod without any knowledge of Franklin’s research. (Diviš’s findings were not well received, however: the scientific community didn’t think much of his shoddy attempts at preventing storms, while the local farmers were so confident in his abilities that they blamed him for a drought and razed the whole structure.)

So too with cuckservative. If you reach back into the shallow annals of cuckservative history, you find that the first tweet to use the word did so as an ironic slur against the right. It came from Twitter user @glopdemon, a.k.a. “horned up rando,” whose bio reads, “yup, its me, the guy that invented cuckservative all those years ago. pay me.” A search confirms his pioneering efforts from April 1, 2010. The tweet, like so many others, was hurled into the void and largely ignored (as of this writing, it has only four retweets and sixteen favorites):

A liberal is just a conservative that hasn’t been cucked yet. Looking for paleo-con man missile to do this. #cuckservative #tcot #tcuck

At first glance, that nasty little bit of derision may seem like your standard outburst of right-wing psychosexual petulance, but a quick scroll down @glopdemon’s feed reveals left political leanings and a pronounced affinity for mocking conservatives. When I contacted @glopdemon, he confirmed that the neo-Nazis had come up with cuckservative independently—though long after his own satirical adoption of the portmanteau. I also learned that @glopdemon came to Twitter through the forums of Something Awful, now recognized as the progenitor of so-called “Weird Twitter,” a Twitter-based comedy style often characterized by the sort of absurdist humor that plays well in the compressed 140-character format. It’s a signature of the Weird Twitter movement to mercilessly troll right-wingers. Alas, poor @glopdemon reports that he’s received only accolades from the reactionaries he sought to mock:

I made my tweet as kind of a throwaway joke and forgot about it until a month or two ago when some conservative guys started favoriting it and I knew something was up.
Anyway, these guys came up with it independently, but it’s so stupid that I figured if I have to deal with weirdos favoriting a tweet from five years ago, I might as well have fun with it so I started making a bit of a ruckus about having created it and wanting credit.

Yes, @glopdemon’s satirical use of cuckservative predated the earnest use by roughly five years, simply because extreme right-wing hysteria will always eventually eclipse any attempt to parody it. Call it “Glopdemon’s Law.”

There’s a lot of precedent for this sort of epistemological confusion in political and cultural debate. My own favorite specimen dates from the 1970s. When Norman Lear, one of the creators of All in the Family, introduced America to the comically backward Archie Bunker, the first episode was preceded by the following disclaimer:

The program you are about to see is “All in the Family.” It seeks to throw a humorous spotlight on our frailties, prejudices and concerns. By making them a source of laughter, we hope to show—in a mature fashion—just how absurd they are.

Viewers, of course, interpreted the show for their own ends. Some got the joke and laughed at Bunker’s offensive politics. Many glorified the protagonist’s behavior as testimony to the resilience and endurance of traditional values. Still others were incensed by the show’s light-hearted depiction of the leading man’s bigotry, arguing that laughing at something so prevalent and politically dangerous downplays the legitimate threat it represents.

Never mind that All in the Family sought to defang the threat of right-wing intolerance by exposing it to mass ridicule. For the prissy scolds keeping satire at an anxious arm’s length, the real outrage was that people were laughing at what they should have been denouncing. The modern-day equivalents of these earnest Bunker-detractors now write think pieces about things like cuckservative because it’s the brazen coarseness of bigotry that bothers them and not the bigotry itself.

The amount of liberal and conservative ink that’s been spilled over cuckservative has been a performative demonstration of genteel manners. I can’t imagine that the writers clutching their pearls over the slur are genuinely surprised by the sentiments of the extreme far right. Rather, it seems that the whole idea of the word is so gross and outrageous that it offends their prim sensibilities in the most affirming and self-congratulatory way—by confirming their libidinal fantasy of ideological opposition. In fact, part of the reason the word exploded far and wide on social media is that left-leaning Twitter and Facebook users thought it was so hilariously repugnant.

Likewise, it’s no coincidence that the loudest intra-movement admonishments of the cuckservative slur came from the sort of right-wingers who boast large enough followings that they must cater to prim sensibilities. Meanwhile, back in the real world, umbrage appears to be losing its political currency among our less patrician reactionaries. As prophesied by El Rushbo, Trump continues to win the hearts and minds of those who might not openly deploy such nasty little pejoratives as cuckservative but who can be reliably swayed to share the sentiments that such terms convey. Even the liberals covering Trump’s campaign seem to suggest that his true offense has less to do with his repulsive ideas than with his repulsive conduct.

The net effect of this summer’s cuckservative panic was to lure liberals once more into their pet allegiance to etiquette and away from the more risky and demanding conduct of politics. The anonymous basement trolls crying cuckservative are gross, but they don’t have the political power or public legitimacy of the “mild-mannered, clean-cut” rightists. (And if Twitter metrics are anything to go by, the word has essentially been retired anyway.) It’s the bien pensant conservatives who continue to whitewash the insidious nature of the conservative movement, even as they convey an air of civilized legitimacy to the easily shocked Joan Walshes of the world.