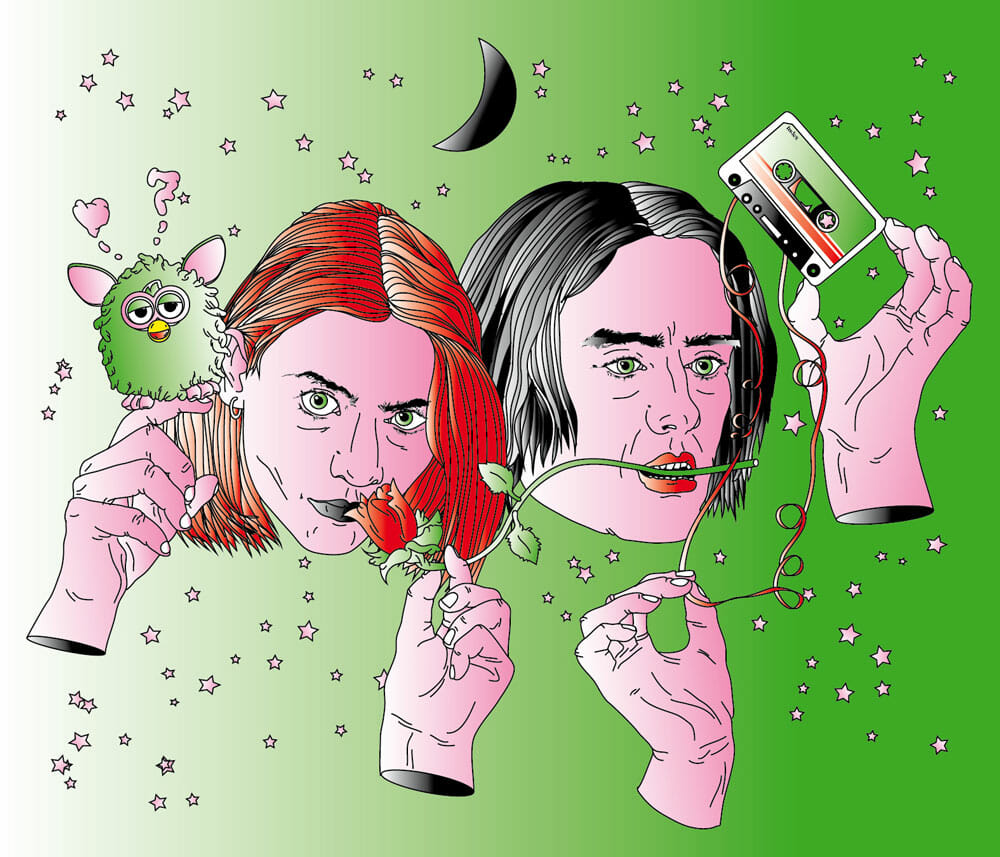 Veterans of high-school Latin classes may remember learning that when he was nineteen years old, Caesar Augustus raised an army and seized control of the Roman Empire. Augustus’s domain stretched from present-day Portugal to Syria; eventually it would come to reach from the North Sea to the Nile. He ruled almost the entire Mediterranean coastline. He may have been the most powerful teen in world history. It’s not hard to imagine more than a few Latin teachers delivering this factoid about Augustus’s age with an arched eyebrow putting a tacit, tempus fugit question to their teen charges: What are you, dear pupils, doing with your time?

The teens are fixed numbers, eleven to nineteen. Yet you don’t have to be a structural anthropologist or developmental psychologist to know that the ways in which different populations experience this liminal stretch of the human life cycle vary wildly across historical eras and cultural milieus—and often within them as well. Among other things, the story of Augustus drives home one critical demographic point: life expectancy was much shorter before the Common Era, which in turn meant that certain rites of passage arrived much sooner than is the case for maturing souls today.

That’s all true enough—yet it’s also true that in 2018, one in five girls on Earth was married by age eighteen. And even within the culturally infantilizing United States, certain teens among its own citizenry—Michael Brown and Abdulrahman Al-Aulaqi to name just two—are deemed treacherous enough to warrant killing by the state. They may not have wielded Augustus’s power, but they apparently provoked official keepers of the peace to treat them as mortal threats, subject to summary execution. In 2014, police officer Darren Wilson shot Brown on the street in Ferguson, Missouri, triggering a wave of local and national Black Lives Matter protests. Earlier, in 2011, President Barack Obama ordered a drone attack that killed sixteen-year-old Al-Aulaqi in Yemen to a much more subdued response. In 2017, Al-Aulaqi’s eight-year-old half-sister was killed in a raid ordered by President Trump.

Ballad of Big Nothing

At the furthest possible social remove from these children are those American teens whose feelings need to be examined, whose tastes drive trends while they themselves remain politically innocuous. Citizens who can power the market while making few demands of society are the natural darlings of capitalism. Angela Chase, the central character of the mid-nineties television series My So-Called Life, played by then-fourteen-year-old Claire Danes, stood as a sublime expression of American teendom. A glyph-like projection of the culture industry, Angela was an ideal figure to make an anxiously self-questioning Gen-X consumer demographic appear familiar and harmless in the great marketing agoras of primetime dramedy. White, average, straight, suburban, sheltered, cool but strategically placed on the right side of transgressive, Angela was the moody nineties version of the girl next door.

My So-Called Life ran from 1994–1995 and centered on mundane tribulations of the comfortably middle-class Angela: obsessing over an aloof boy, swatting away her pesky kid sister, trying out new friends and social groups. The show’s other characters—her parents, sister, and schoolmates—orbited around her fixed, brooding gravitational center, revolving in and out of the spectator’s view. My So-Called Life pictured a slice of middle-class, Clinton-era America. Was it indeed a simpler time? It’s quaint to look again at teendom before social media and behold the weirdly implacable suburban faith that it maintained in its own continuity. The Chase parents are professional but not elite; Angela’s high school is okay, and there’s a sense that things will more or less kick along as they are.

As a character, Angela was noteworthy chiefly for her ordinariness. She possessed no outstanding talent or intellectual brilliance. She appeared not even to have any serious interests: not literature, athletics, art. She listens to music but doesn’t seem terribly engaged. When her father gives her tickets to a Grateful Dead concert, she doesn’t have an opinion about the band one way or another. She follows a local band only because a boy she likes plays in it. She pushes back against her school principal for trying to censor a literary magazine, but doesn’t engage seriously with any broader politics. Her only passion project of note involved, unsurprisingly, her own thwarted teen passion for a cool-dude mate; she compulsively parses every head tilt and gnomic utterance of her crush-object Jordan Catalano (Jared Leto).

Angela’s average-ness did not make her unlikeable; it was, in fact, the character’s greatest asset. It was what made her so relatable. Thousands of suburban teen girls—consumers in early bloom—could recognize within the undemanding contours of her character their own friendship dramas, exasperations with parents and siblings, and, of course, boy obsessions. If Angela had been passionate about, say, roller derby or opera singing, the critical sameness she represented to her audience could not have been established. She would have had a life, not a so-called one.

Angela was also blessed with a dearth of Real Problems, a condition made all too plain by her tactless remark in English class that Anne Frank was lucky—because she was hiding from Nazis in proximity to a boy she liked. When her teacher pulls her aside afterward, the only response Angela can muster is disdainful pity for her teacher’s white-bread sandwich. In addition to Jordan, Angela’s two new friends—saucy, volatile Rayanne Graff (A. J. Langer, now a.k.a. the Countess of Devon) and queer, sensitive Rickie Vasquez (Wilson Cruz)—had troubled home lives, which mainly served to offset the relative stability of Angela’s, and the soft landings waiting for her should she stumble out of line. These characters can’t see the smooth path through college into bourgeois maturity that Angela seems to take for granted.

While they expect their daughter to attend college, Angela’s parents, Patty (Bess Armstrong) and Graham (Tom Irwin), do not send her to SAT tutors or ferry her to extracurricular activities. Patty is mildly dismayed when Angela quits her post at the high-school yearbook, but gets over it pretty quickly. Their singularly light touch in marshalling Angela toward life experiences that would play well on a college essay application makes for another extremely quaint contrast with the organization of youthful experience in today’s precarity-haunted political economy. The elder Chases seem to trust that being ordinary is enough. The screaming fights between mother and daughter over ambition, class anxiety, and university tuition will come some twenty years in the future, in Greta Gerwig’s 2017 movie Lady Bird.

The market loves self-involvement, particularly in women, whom it remorselessly and patriarchically seeks to shape into recreational shoppers. Even in TV-world, Angela can’t grow up to be Sex and the City’s Carrie Bradshaw—the characters’ timelines are misaligned by more than a decade. But the shows share striking formal similarities; they feature voice-over monologues by their utterly average central female characters that dwell mostly on the very small worlds of their interior lives and immediate social circles. Fans of both shows devoted Talmudic-scale analysis to the banalities of the lead characters’ lives and thoughts. Both Angela and Carrie became figures of deep identification. The rest of the world—as many viewers had the luxury of thinking—seemed very, very far away.

In the pilot episode of My So-Called Life, Angela spends an evening in the parking lot of a cheesy dance club, waiting for someone named Tino—who, Rayanne vouches, can get them past the ID-checkers at the door. Waiting for Tino, Angela, Rayanne, and Rickie pass the time laughing and gossiping. Hours later, the girls try on each other’s shoes to entertain themselves. Tino never shows. Monday, at school, Rayanne boasts about their amazing night out as the chords of the show’s theme swell. “I’m telling you, we had a time. Didn’t we? Didn’t we have a time?” Angela smiles in return, “We did. We had a time.” The scene closes on Angela’s beaming face, the music cresting. It’s a brilliant dénouement—the teen years are mostly about waiting, and elevating the mundane to high drama.

Yet as rendered on My So-Called Life, the Sartrean ordeal of waiting for life to happen in the nineties seemed an especially listless undertaking. On Halloween, Rickie walks past Jordan, who is smoking under some bleachers—another classic teen haunt. Jordan complains that every year, he and his friends come to the same spot, and kill time in typical teen-miscreant fashion, turning over trash cans. They return time and again, Jordan says, because this year, “maybe something cool will happen.” Here again, we behold the cultural sweet spot that marketing wizards and political leaders alike were diligently seeking to exploit in a whole decade’s worth of adolescent self-mythologizing, from the tedious Ethan Hawke monologues in Reality Bites (1994) to Douglas Coupland’s 1991 ur-text, Generation X: a potentially powerful, youthful populace unable to think of anything to do but wait.

In another episode, Angela sits in social studies class, watching footage of President Kennedy giving his famous “Ask Not . . . ” speech. In a voice-over monologue, she says, “Grownups like to tell you where they were when Kennedy was shot, which they all know to the exact second. Which makes me almost jealous . . . like I should have something important enough to know where I was when it happened.” (It can hardly be expected that nine-year-old Angela from the Pittsburgh suburbs would remember—or comprehend—the Berlin Wall coming down or the Soviet Union collapsing, but, as they said in the nineties, whatever). If anything, My So-Called Life’s version of teendom seeks out a coherent cultural identity after the end of history, when all that seemed left to do was wait around for it to start again. (For a curious adult companion narrative, ostensibly devoted to the tough decisions and sober responsibilities of politics qua politics, see the similarly self-dramatizing, culture-war-obsessed plotlines of Aaron Sorkin’s great televisual nineties love letter to neoliberal power, The West Wing; history was on hold everywhere back then—even in the rapid-fire dialogue of the maximally powerful technocrats then charged with making history.) Storm clouds were certainly gathering in 1994–1995, but the Columbine massacre, which brought school shootings to the fore of national consciousness, had yet to happen. Other big historical rubicons lay ahead: 9/11, the burst of the housing bubble, Occupy Wall Street, the Arab Spring, and Black Lives Matter.

Augustus, for his part, did not lurk about, waiting for something cool to happen. Neither do many kids these days, exemplified perhaps most saliently by Alexandria Ocasio-Cortez, who, barely a decade beyond her own teen years, is causing a great deal of distress among her elder neoliberal colleagues in Congress for her ambitious agenda-setting and her refusal to bow to the many weird, seniority-based mandates of House decorum. One of her colleagues went so far as (anonymously) urging her ouster, because “You’ve got numerous council people and state legislators who’ve been waiting twenty years for that seat.” In other words, they’ve been waiting since Angela Chase’s senior year.