At the end of 2014, we announced that we would break from our institutional overlords and cast The Baffler’s fortunes into the wilds of independent publishing. So there, zeitgeist!

Let 2015 mark the year we opened a publishing office in New York, as planned, to work in parallel with the editorial HQ in Harvard Square. We also produced a dozen public events and conjured the largest three issues in The Baffler’s history, pagewise—on the rule of fashion (Venus in Furs), the dialectic of violence and empathy (Battle Hymns), and the life-shaping power of families (The Family That Preys Together). That’s 624 ad-free, unadulterated pages in print and online—plus another 160 web-only essays.

There’s much more on the way. In 2016, we’ll publish The Baffler on its first-ever quarterly schedule. And over the coming months, we will roll out new web-only columns by Natasha Vargas-Cooper, Chris Lehmann, Amber A’Lee Frost, and Corey Pein. Come back and see for yourself.

Meanwhile, here’s a year-end sampler of the essays, stories, art, and poems that buoyed us through our exciting year. Enjoy.

Satirized for Your Consumption
By Ben Schwartz
Issue no. 27

“We’re used to comedians speaking truth to power, to cruelly topical comedy sketches and a steady diet of merciless political cartoons. But . . . comedy was stolen from the professional jokesters by their traditional targets and became, unexpectedly, the new language of power, policy, and politics.”

Dickheads
By David Graeber
Issue no. 27

“Couldn’t we say that a tie is really a symbolic displacement of the penis, only an intellectualized penis, dangling not from one’s crotch but from one’s head, chosen from among an almost infinite variety of other ties by an act of mental will?” It’s no wonder the BBC called it—Graeber’s essay, that is, not the necktie—“not quite safe for work.”

“If Yahoo was going to become a true digital news brand, it would have to go on a major innovation binge—it’d have to start ‘breaking shit,’ in other words. One senior news executive exulted that Yahoo News was in the most enviable position that any media company could be—it was a startup, he’d intone, that already had the largest readership on the web.”

“If [The New Republic] had been only a journal of politics, there would be very little reason to regret its recent frontal lobotomy at the hands of its new owner. Like liberalism itself, the magazine had already definitively surrendered to technocratic managerialism long before Chris Hughes and company came along in 2012.”

More Titillated Than Thou
By Ann Neumann
Issue no. 28

“Didactic morality may dictate the plot contrivances of the bonnet book, which serves as a sort of pluperfect variation on the evangelical themes of devotional purity, sacrifice, and individual salvation. . . . Being pure and long-suffering may stand you in good stead as a bonnet-book heroine—but it does nothing for you as a writer-cum-marketer of Amish-themed fiction.”

A Study in Total Depravity
By Siva Vaidhyanathan
Issue no. 28

“The twenty-first-century university is a super freak—the kind you don’t take home to mother.”

Better Management Through Belles Lettres
By Merve Emre
Issue no. 29

“It’s easy to see, then, why business schools continue to insist on fiction as the perfect tool for teaching empathy in the corporate world. . . . The ‘moral leader’ is the perfect counterpoint to the figure of the finance drone or socially bumbling tech CEO, who responds so predictably to financial incentives that he retains no sense of individual personhood, no sense of right or wrong.”

No Such Cuck
By Amber A’Lee Frost
Issue no. 29

“The amount of liberal and conservative ink that’s been spilled over cuckservative has been a performative demonstration of genteel manners. I can’t imagine that the writers clutching their pearls over the slur are genuinely surprised by the sentiments of the extreme far right.”

Memoirs of a Revolutionary’s Daughter
By Neda Semnani
Issue no. 29

“When they landed on Iranian soil, my mother said that the leftists fell to their knees and kissed the tarmac, while the Islamists hailed both Allah and Khomeini. Ten months after my parents landed in Tehran, I was born—a child of the revolution.” 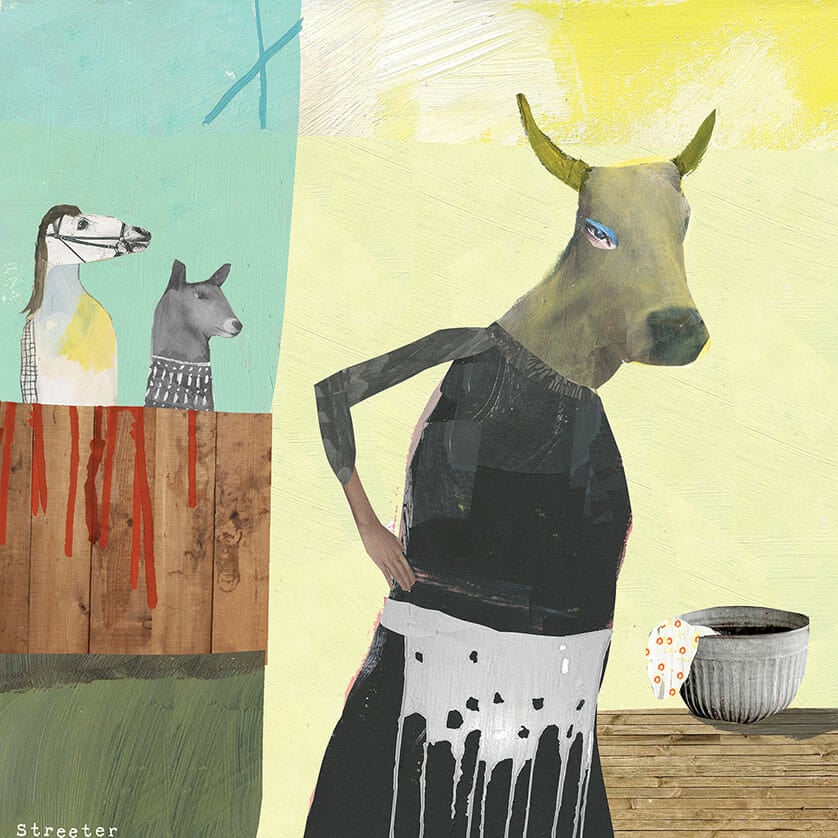 “Mother Anne opened the door and looked in. Sister Theresa was half-lying on her bed, the Holy Eucharist in one hand, and egg paste in the other.”

From Aurora
By Kim Stanley Robinson
Issue no. 28

“Their only home was breaking down. They were not fully aware of this fact, possibly because they themselves were growing sick, as one aspect of their home’s breakdown.”

“The blue pyramid looked up at Horn with three bright blue eyes. It shifted a tiny blue tendril, touching Horn’s fingers with it. Horn shivered.”

From All the Houses
By Karen Olsson
Issue no. 29

“He is mysterious to the people around him. He speaks in abstractions, makes general pronouncements in a flat voice that stops, backs up, starts again, and does everything it can to avoid any slithering, biting emotion. His jaw clenches. But every so often, a vent opens and he releases a quantum of steam.”

Melinda Beck, for Lucy Ellmann’s “Side Boob and Insensibility”
Issue no. 28

Henrik Drescher, for George Scialabba’s “The Dialectic of Love and Authority”
Issue no. 29 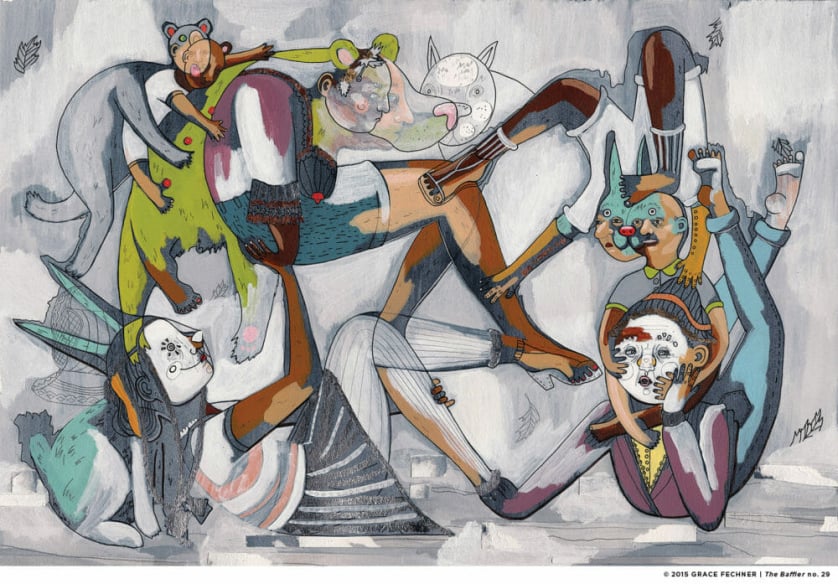 How Long Now Since the Mailman’s Gone Missing?
By Danielle Blau
Issue no. 27

“It’s a sad yellow feeling / like walking into someone else’s childhood.”

“Following some paperwork you shipped west / and I flew home economy. / An interval like summer / passed before a van found my house / and tilted you off the dolly.”

“How used we have become / to strangled cries! / To souls shrinking in the long chill.”

No Knowing
By Jennifer Nelson
Issue no. 29

The American Academy on Mars
By Carter Ratcliff
Issue no. 29

“Numbers can’t know anything. / Unlike our scientists, who build all sorts of certainties upon them. / Just like artists, to hear them tell it.” 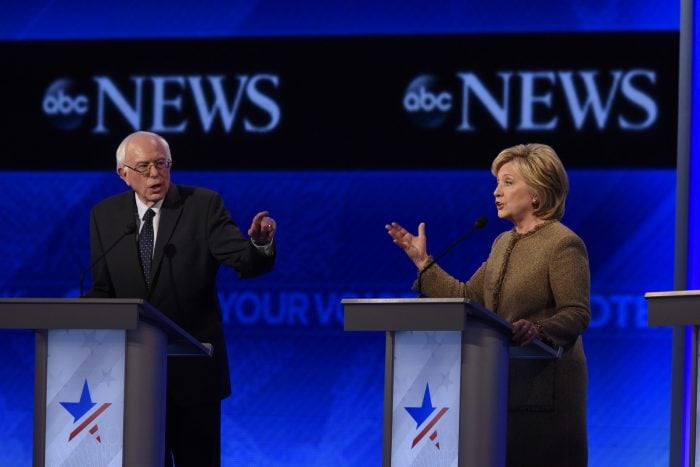 The Baffler Joins the MIT Press
The Baffler
Word Factory 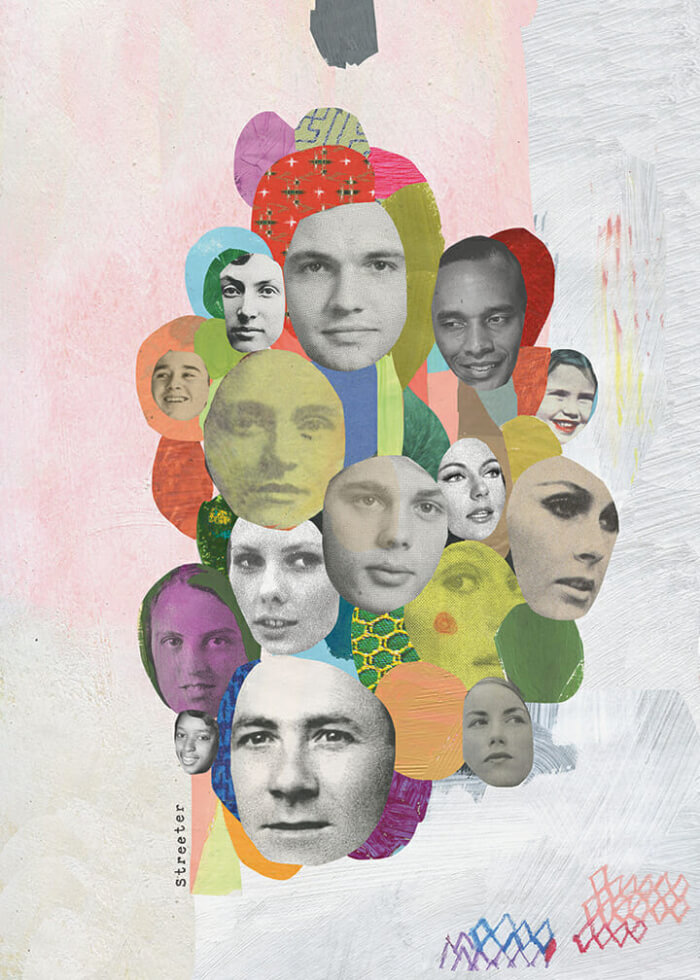