“Who am I?” Steven Spielberg asks in Spielberg, a new HBO documentary about Steven Spielberg. He pitches this question as the great theme of Lawrence of Arabia, the movie that made him want to abandon the art of filmmaking because of its overwhelming experiential power. But then he watched it again, a week or two later, and recommitted himself to directing. Why? No one knows. In Spielberg, no one knows anything about Steven Spielberg, and when one perspective threatens to harden into a judgment, it is undercut by a counterclaim from another talking head.

Martin Scorsese invokes John Cassavetes to describe Spielberg as “fearless” not long after Spielberg himself confesses to being full of fear on the set of Jaws. Superproducer Kathleen Kennedy promises that Spielberg does not “overintellectualize things” before critic J. Hoberman compares him to a “public intellectual.” Ben Kingsley assures us that on the set of Schindler’s List, Spielberg transformed his cast into “actor-warriors” who “heroically” avoided sentimentality; yet in describing Empire of the Sun, playwright Tom Stoppard suggests (non-pejoratively) that Spielberg is, in the end, a sentimentalist. Harrison Ford promises that Spielberg, unlike other film artists, directs his films for the audience, while Bob Balaban asserts that Spielberg makes “big, personal films.” This is not in itself a contradiction—a director can see himself as an audience member; yet earlier in the documentary Roger Ernst claims that Spielberg is the one director who understands that the true audience of Hollywood cinema is its film executives.

Conflicting mythologies aside, the question of Spielberg matters because he is one of Hollywood’s more persistent and lucrative technologies, a kind of self-correcting artificial intelligence who balances immersive dreamworlds with non-cynical, if grossly sentimental, appeals to critical favor. Hence Spielberg’s annus mirabilis in 1993, the year of Jurassic Park and Schindler’s List.

Which is to say that there is no longer any obvious material difference between Spielberg, or Spielbergism, and Hollywood itself. Nor is there an easy way to separate Spielberg from, say, Silicon Valley; known for shrewdly merging new technologies with high design and a broad appeal to culture, he is a semiotic kissing-cousin to Steve Jobs. It’s no surprise to learn that Apple, as part of its billion-dollar investment in original content, has just signed Spielberg to reproduce his Amazing Stories series from 1980s television. And, anyway, it’s doubly unsurprising if you consider that Netflix’s Stranger Things is a nonliteral remake of The Goonies.

There is no longer any obvious material difference between Spielberg, or Spielbergism, and Hollywood itself.

Who is Spielberg? Hollywood’s vanishing mediator, Spielberg is hard to know, but it’s not hard to know why. Susan Lacy, the director of the HBO documentary, has been candid about the lack of crisis in the director’s personal history, which began in a benign suburb of Phoenix. His dad was an important computer scientist, and his mom was a concert pianist. The climacteric of his entire life, Spielberg says, was their divorce, which he long blamed on his father’s lack of vigor; his frustration once boiled over when he repeatedly shouted “crybaby!” at his dad, who wept silently at dinner. (The scene was later recreated in Close Encounters of the Third Kind). In what would amount to the greatest irony he’d ever know—which may explain the near-total lack of irony in his films—it turned out that his mother was in love with his father’s best friend, which led her to ask for divorce.

Rather than be honest about the humdrum inscrutability of Spielberg, Lacy follows Spielberg’s own example and mythologizes childhood—Spielberg’s childhood. The idea is that Spielberg, a lonely child from a somewhat broken family, withdrew into a fantasy realm of ameliorating make-believe which inspired his later filmmaking. (It is never considered that Spielberg could simply afford a camera at an early age, or that family connections may have helped him get an early start in Hollywood.) Spielberg then reproduced this sense of childhood wonderment in the many young protagonists and aliens and adventures of his franchises. This narrative seems true to me, at least in one respect: the Spielberg model of childhood is very much with us today, and it demands that children prefer robust “worlds” and escapist fantasies and formulaic genres to art that finds weirdness in our own shared world. Even now the vacuous franchises that were offered to Gen-X children by New Hollywood are being forced on their own children, who are now babysat with the idea that full-bodied worlds can substitute for the missing love from a mother or a father.

Almost no one would argue that Spielberg’s films are good, and yet he continues to make them with impunity.

Twenty-first century Hollywood, too, acts as a child of divorce—its imagination thrives in the dead zone of separation between a dwindling filmgoing public and any idea this public might have of a collective project (or meaningful social life). And it acts as a child of divorce because it is, like many of us, the progeny of Spielbergism. The opportunistic self-referencing found in the current Marvel superhero “universe” films descends from comic books, yes, but it’s also an evolution of the ultra-successful experiment in cross-referencing hatched by Spielberg and George Lucas, who made entertainments together, like Raiders of the Lost Ark, and alluded to each other’s work in their films. “The walls of the children’s bedrooms in Poltergeist,” noted critic Andrew Britton in the 1980s, “are festooned with Star Wars memorabilia.”

This penchant for escapist self-referencing mocks all of us in the trailer for Spielberg’s forthcoming Ready Player One. The film, a spectacle of digital animation that should remind us, if we cared to remember, that Spielberg gentrified cinema with Jurassic Park’s radically animated dinosaurs, appears to be a work of intense contemporary realism, though it’s supposedly set in 2045. The trailer’s voiceover begins:

I live here in Columbus, Ohio. In 2045, it’s still ranked the fastest growing city on Earth, but it sure doesn’t seem like it when you live in the Stacks. They call our generation “the missing millions.” Missing not because we went anywhere; there’s nowhere left to go. Nowhere except the Oasis. It’s the only place where it feels like I mean anything. A world where the limits of reality are your own imagination.

This voiceover could not better describe Spielbergism—and life under the sway of total entertainment—if it meant to. “The Stacks,” a trashscape of stacked mobile homes and broken-down vehicles, very much describes the rural Midwestern landscape in 2017. And it’s clear that we’ve already lost not one but two generations to “the Oasis,” a “world” defined by “imagination.” The Oasis is just any given Spielberg film, a fact driven home by what follows: a procession of characters and images from a Spielbergian dreamscape, from Back to the Future’s DeLorean to the giant from Brad Bird’s The Iron Giant. Spielberg is a net of crisscrossing references to Spielberg and his collaborators.[*]

Almost no one would argue that Spielberg’s films are good, and yet he continues to make them with impunity. This is the fault of film critics like David Edelstein and A.O. Scott, who defend Spielberg in Spielberg by shortchanging his detractors: What’s the point of criticizing Spielberg? What’s so bad about being a director of quality entertainments? This defense comes from Spielberg himself. When asked to respond to one unnamed critic’s assertion that his films shouldn’t be confused with art, Spielberg gets about as mad as a rich man can. “Sometimes,” he says, “I think that statements like that are pretentious in themselves because it says that art is serious and that art can’t move you; art can’t be on a bicycle and fly across the moon—that that can’t be art.” It’s mesmerizing to behold: Spielberg’s self-defense becomes self-reference. Why can’t art be E.T.? Why can’t E.T. be art?

Contemporary Hollywood films, like all of Spielberg’s films, get worse with repeated viewings. Yet almost any person you talk to will attempt to justify the intake of Hollywood garbage by way of the Spielbergian defense: What’s so wrong with consuming expensively made trash? This suggests that there is indeed something drug-like about twenty-first century entertainment, and it’s frustrating to admit that the comparison between Hollywood and “our national addiction to foreign oil” is a worthwhile one. (If it’s not Hollywood, it’s “binging” on streaming TV.) And this druggishness explains in part why filmmakers like Spielberg and Christopher Nolan (another child of divorce who reconvenes broken families in his films) rely heavily on the idea of “the cinematic experience”; if their films can drown you in wonderment—loud sounds, 70mm images, fully realized worlds—the first time, you’ll revisit them over and again, even though they are bad, in a bid to reclaim the original high. The high inevitably diminishes, and the dependency grows.

Still, Hollywood pumps out the snacks, giving us all diabetes of the mind; it recreates the same franchises and experiences ad nauseam, even as it turns out that this interminable child’s quest to replace the love of Mommy-Daddy has consequences in the world outside the world. Spielberg’s cinema has made us all into children of divorce.

[*] Correction: This sentence has been edited to reflect that Brad Bird was the director of The Iron Giant, not Spielberg, as originally implied. Spielberg has said he considered including the giant in his upcoming Ready Player One. Spielberg and Bird collaborated years ago on Amazing Stories but not on The Iron Giant. 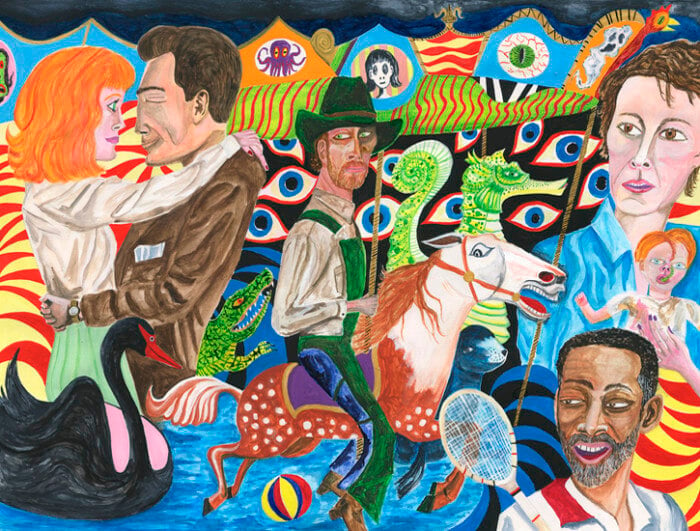