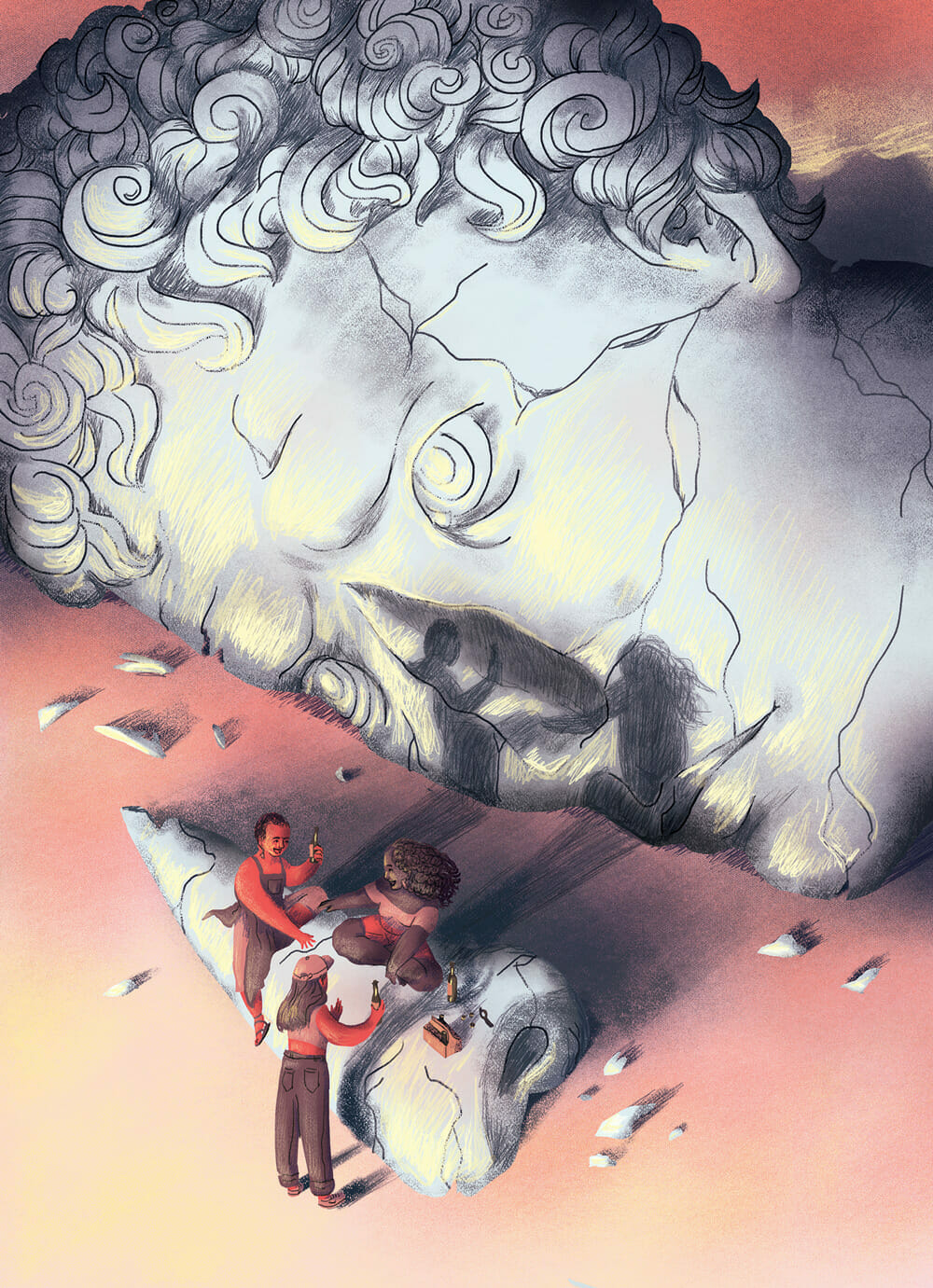 Sometimes it takes a slovenly alt-right “strategist” to put things in proper historical perspective. In a recent chat with a journalist, Steve Bannon called the #MeToo movement an “anti-patriarchy movement” that is “going to undo ten thousand years of recorded history.” That much is true. But the implication that patriarchy is somehow the same as civilization gets more implausible with every me-too revelation.

We have been encouraged to think of patriarchy as a solemn undertaking, a millennia-old system designed to keep women down and young men from getting out of line. Its favorite notions, over the centuries, have been Honor, Tradition, Power, and Glory. Its material manifestations range from pyramids to skyscrapers, from the simple lines of ancient Greek temples to the neoclassical architectural majesty of nineteenth-century European capitals. It accessorizes its most hallowed rituals with columns of uniformed soldiers and stirring martial music.

The Naked and the Daft

But how silly patriarchy is looking at this moment, as one rich and powerful man after another falls victim to the #MeToo movement. We’ve learned that the fatuous centrist Charlie Rose, whose wardrobe includes Versace slacks, liked to swan around among his female office staff in the nude, as did the deep-closeted casino billionaire Steve Wynn. Matt Lauer, whose job was to lend gravitas to the Today show, kept a bag full of sex toys in his office, so he’d have something to play with should he manage to lure a young woman in. The president of the most powerful nation in the world, it has been alleged, employed prostitutes to pee on a Moscow hotel bed and enjoyed being spanked with a copy of Forbes magazine featuring his likeness on the cover.

How silly patriarchy is looking at this moment, as one rich and powerful man after another falls victim to the #MeToo movement.

Feminists have, of course, seen through the clouds of glory trailing patriarchy to expose its intrinsic cruelty and violence. But one thing we have seldom questioned is its seriousness. Consider the feminist dictum that rape is not about sex, but power. The rapist isn’t having fun; he’s simply enforcing the age-old power of men. That is, he’s doing a kind of work—a service to the other elite men who are his peers. Sex, and hence the possibility of pleasure, at least for men, seldom enters into the feminist discourse on male violence, which has treated rape and sexual assault as an enactment of male domination, and perhaps a necessary warning to women—a kind of public service announcement.

But the mounting accusations of sexual harassment by powerful men suggest that feminism has been taking patriarchy a bit too seriously. Maybe it’s not about the endless reproduction of power relationships; maybe it’s about guys just having fun. Out of sight of nannies and governesses and wives, they are stealing treats. One of the accusers of Hillary Clinton’s lecherous former “faith consultant” says he looked at her “like she was a snack”—not a person or even a pretty girl but a handy between-meals treat. Certainly Harvey Weinstein treated women this way, hiring a pimp disguised as a colleague to line up women in the foreign cities he visited so that the great mogul would never have to go without sustenance. The sheer entitlement on display here puts one in mind of Newt Gingrich’s statement that he feels like “a happy four-year-old who gets up every morning hoping to find a cookie.”

The Treats of Power

In theory, we might be able to extend a grudging smidgen of sympathy to the downtrodden working-class man who comes home to beat or rape his wife. How else is he going to experience power? But many of the men starring in today’s sexual-harassment scandals already wield plenty of power, through their positions or their money and can hardly claim to be deprived of pleasure and flattery in their daily lives. This is the class that stays in five-star hotels, flies in private jets, and expects their every whim to be gratified by a staff of eager underlings.

Today’s woman should laugh out loud at every instance of male pomposity she encounters, especially the powerful man who likes to wag his penis at women in private.

Fun has never been considered a major force in history, but perhaps it—and “the pursuit of pleasure” in general—should be. Gaze up again at the great architectural relics of empire you can find in London or Madrid. Where did the wealth come from to build these marvels? From war of course—wars of conquest. And what is war? Well, it’s hell, or so it is said. But it’s also the supreme male adventure, especially for those males who get to ride, not tramp, to the battlefields.

For the last ten thousand years, from the Roman conquests through the Viking raids to the Crusades that followed them and on to the global wars of the twentieth century, war has been an opportunity for taking both treasure and pleasure—rape and pillage. It offers plenty of glory and honor too, if only posthumously, but it hardly amounts to “civilization.”

So, what is a twenty-first century woman to think as she picks her way through the rubble of patriarchy? First, she should laugh out loud at every instance of male and class-based pomposity she encounters, remember that the president—or the esteemed artist or academic—likes to wag his penis at women in private. She should recall that the Wizard of Oz is an evil clown but still a clown. Then she might consider a suitable punishment for our dethroned patriarchs. Maybe they should be confined to one big locked room stocked with high-tech sex toys and left to fuck themselves sick.

With that accomplished, women—and male dissidents from patriarchy should be included here—might want to turn their attention to what a world shaped by the female pursuit of pleasure might look like. Would it be gentle and rainbow colored? Or would it pulse with its own kinds of ecstasy and transgression?