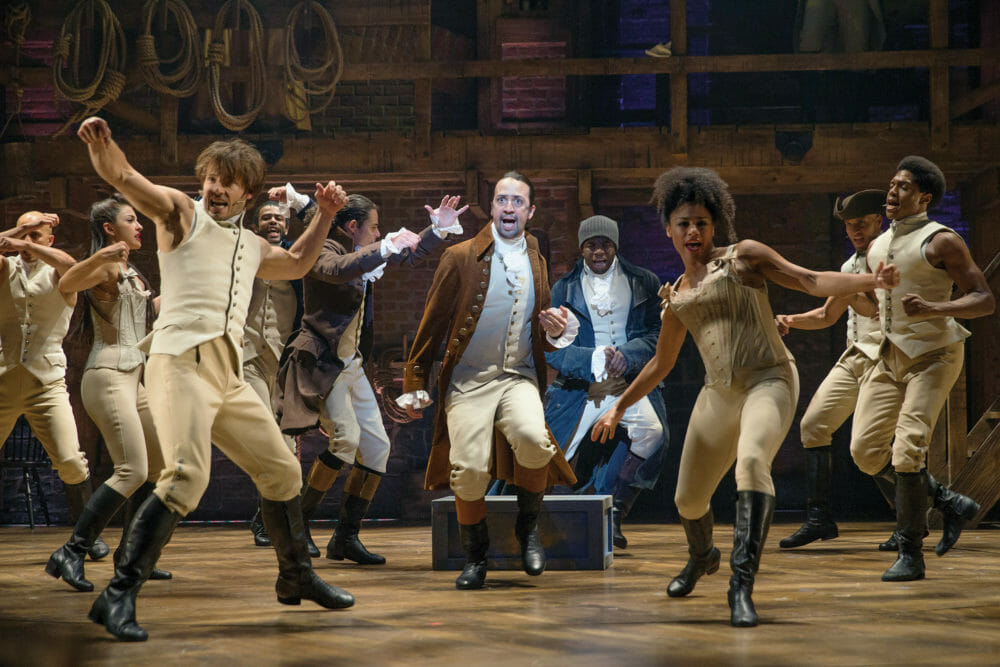 Lin-Manuel Miranda, center, and the cast of "Hamilton" at the Richard Rodgers Theater. /
S
a
l
v
o
s

Two years before he was shot in the chest, and two centuries before he became an unlikely pop icon, Alexander Hamilton wondered how religion might be used to win elections. Suggesting that politics could not rely “merely on the reason of men,” the nation’s first Treasury secretary proposed the creation of a “Christian Constitutional Society” designed to appeal to an emotion-driven electorate by uniting a defense of Christianity and the U.S. Constitution. The passions incited by faith, Hamilton believed, could be harnessed to “combat our political foes.”

This plan may have been a sincere product of late-blooming piety on the part of the embattled Founding Father, or it may have been a cynical ploy. Either way, one thing is certain: such sharp-eyed deployments of spiritual sympathies would not play as well on Broadway as rap-battle policy debates. So it’s no surprise that the religiosity of the “ten-dollar founding father” in Hamilton: An American Musical is mostly limited to personal appeals in times of duress: a somber search for solace through prayer after the death of his son, along with some NSFW intercessory pleading when femme fatale Maria Reynolds leads him to her bed. “Lord,” Hamilton croons in vain, “show me how to say no to this.”

There’s just one other cameo for religious sentiment in Lin-Manuel Miranda’s Pulitzer-, Grammy-, and Tony-winning blockbuster. It comes as Hamilton is helping George Washington write his famed farewell address. A quotation from the Book of Micah presages the peace and hard-earned repose awaiting the retiring president, but that’s where the piety stops. Hamilton’s real-life suggestion that Washington make a case that “national morality” requires “a generally received and divinely authoritative Religion” ends up on the cutting-room floor, just like the Christian Constitutional Society, and for probably the same reason: it plays poorly with the kids. “Religion and morality are essential props,” Hamilton wrote in his draft of Washington’s Farewell Address. “In vain does he claim the praise of patriotism, who labors to subvert or undermine these great pillars of human happiness.” Even with a killer breakbeat, this invocation of the awesome power of biblically sanctioned social control could never be cool.

Even with a killer breakbeat, biblically sanctioned social control could never be cool.

Much has been said about how casting minorities as icons of Independence makes Hamilton “the story of America then, told by America now,” but its relationship to belief is the more subtle act of cultural reimagining. Miranda’s ingenious retelling of Revolutionary-era U.S. history studiously ignores common eighteenth-century notions of the role religion should play in society, replacing them with the fully privatized faith of today.

Yet despite the play’s stalwart separation of church and founding statesmen, there remains something about Hamilton that strikes a religious nerve: namely, the way that its various canny subversions of the popular imagery of the Founding era ultimately reaffirm the American creation myth. The musical’s off-the-charts popularity stems from more than Miranda’s catchy hooks and inventive lyrics. As Hamilton continues to swell into a bona-fide reflection of the zeitgeist, one underlying factor seems most responsible for its rise: Miranda’s fable of the republic’s founding offers a way to take part in the cult of sacred history without the usual birthright credentials and ritual obeisances. This is no mere hip-hopera; it’s an altar call for would-be patriots previously too burdened by ambivalence to fully embrace the American faith.

The favored avatars of this faith may change with the times, but its creed does not. The birth of the nation remains our One True God. The Revolution, the Constitution, and the Founding Fathers serve as something of a trinity establishing the culture’s unquittable cosmology and incontestable truth. Seen this way, Hamilton is less a new vision of the past than a translation of the sacred stories of American civil religion into the vernacular—in this case, the lingua franca of contemporary pop culture, a mashup of hiphop, R&B, rock, and show tune samples. And like any vernacular rendering of a text considered holy and immutable, it is at once radical on the surface and retrograde underneath—the best example in years of how a dominant worldview adapts to survive social change.

Like any vernacular rendering of a text considered holy and immutable, Hamilton is at once radical on the surface and retrograde underneath.

In its marketing materials, as well as in the title of the bestselling book about the show, Hamilton is frequently called a revolution. A more apt trope would be a Reformation. After all, the sixteenth-century religious upheaval that arguably gave birth to the American experiment sprang forth from a vernacular shift in popular worship. And this shift, too, was legitimized through a vision of wider access to the foundational stories of a civilization.

Exactly five hundred years before Hamilton rewired the nation’s mythology for the disaffected, the Dutch theologian and humanist Desiderius Erasmus imagined a world in which access to sacred books was not limited to the learned few.“Would that they were translated into each and every language so that they might be read and understood not only by Scots and Irishmen, but also by Turks and Saracens,” Erasmus wrote in 1516. “Would that the farmer might sing snatches of scripture at his plough, that the weaver might hum phrases of scripture to the tune of his shuttle, that the traveler might lighten with stories from scripture the weariness of his journey.”

Building on Erasmus’s vision a few years later, Martin Luther undertook his translation of the New Testament into German, first published in 1522, knowing that replacing one language with another was not enough. He believed that the meaning of the text had become dangerously detached from the lives of common believers, and saw the task of the translator as a gently didactic one: i.e., to encourage Christians to see themselves and hear echoes of their voices in the pages of holy writ.

Defending his process of translation, Luther insisted that creating this sense of recognition was essential even when it departed from the text’s literal meaning. “We must ask the mother in the home, the children on the street, the common person in the market about this,” he wrote. “We must be guided by their tongue, the manner of their speech, and do our translating accordingly. Then they will understand it and recognize that we are speaking German to them.”

Hamilton is an altar call for would-be patriots previously too burdened by ambivalence to fully embrace the American faith.

In the same fashion, persuading audience members that they recognize stories and people from which they have become alienated is Hamilton’s not-so-secret sauce. Its creator sounds a lot like Luther when he recounts the charged moment of recognition that set him on the path to chronicling Alexander Hamilton’s life in the light of contemporary immigrant experience. Here’s Miranda, explaining to The Atlantic his decision to undertake a Reformation-style recasting of the Hamilton story as he read Ron Chernow’s 2004 biography: “When he gets to New York, I was like, ‘I know this guy.’ I’ve met so many versions of this guy, and it’s the guy who comes to this country and is like, ‘I am going to work six jobs if you’re only working one. I’m gonna make a life for myself here.’”

And the show extends this same basic translation method to every Founder it depicts. In the original Broadway cast, Leslie Odom Jr.’s Aaron Burr was a smooth Mos Def. Christopher Jackson’s George Washington was John Legend crossed with Dr. Dre. When Daveed Diggs made his second-act entrance as Thomas Jefferson in rockstar purple, he was meant to evoke Prince. The point of all these associations is not just to amp up the production’s entertainment value. As Diggs has described his earliest introduction to the show—his conversion narrative, if you prefer—he was jolted into recognition by the same mystic powers that imbued Luther’s Bible translation: language and characterization creating a set of associations allowing the text to resonate with his experience of daily life.

The first time I did a workshop of it, Chris Jackson was playing George Washington, and it changed everything the first time I heard him sing as George Washington. Because he was so clearly George Washington. So all of a sudden, this guy that I know really well, we’ve been freestyling together for years, and, I know his family, I know his kids, I know his wife—this is George Washington! A regular person who looks like people who I know, who has many successes and many failures and is not a perfect human being but is a great, great man. All of a sudden I have a real connection to this Founding Father who’s been the dude on the money for so long. If something similar to that is happening for people who come see the show, the effect really is profound, because that gives me a type of ownership over the history of this country that I didn’t have before.

But ownership of history can be tricky. Inevitably, Luther’s vernacular protest against ecclesial authority succeeded long enough to undermine itself, coming over time to replicate many of the very things it rejected. Luther’s anti-papal vision of a “priesthood of all believers” wound up ratifying the still-more exclusive doctrine of predestination, and his disdain for literalism when it came to translating the Bible gave way to the rote fetishization of scripture itself. Erasmus’s dream of farmers and weavers singing snatches of scripture at their ploughs and shuttles never made the benefits of faith equally accessible to all.

And so, too, with the new civic faith enshrined in Hamilton: we may have found a few new songs to sing about the gods of our troubled history, but when it comes to the stories we count on to tell us who we are, we remain caught in an endless refrain.