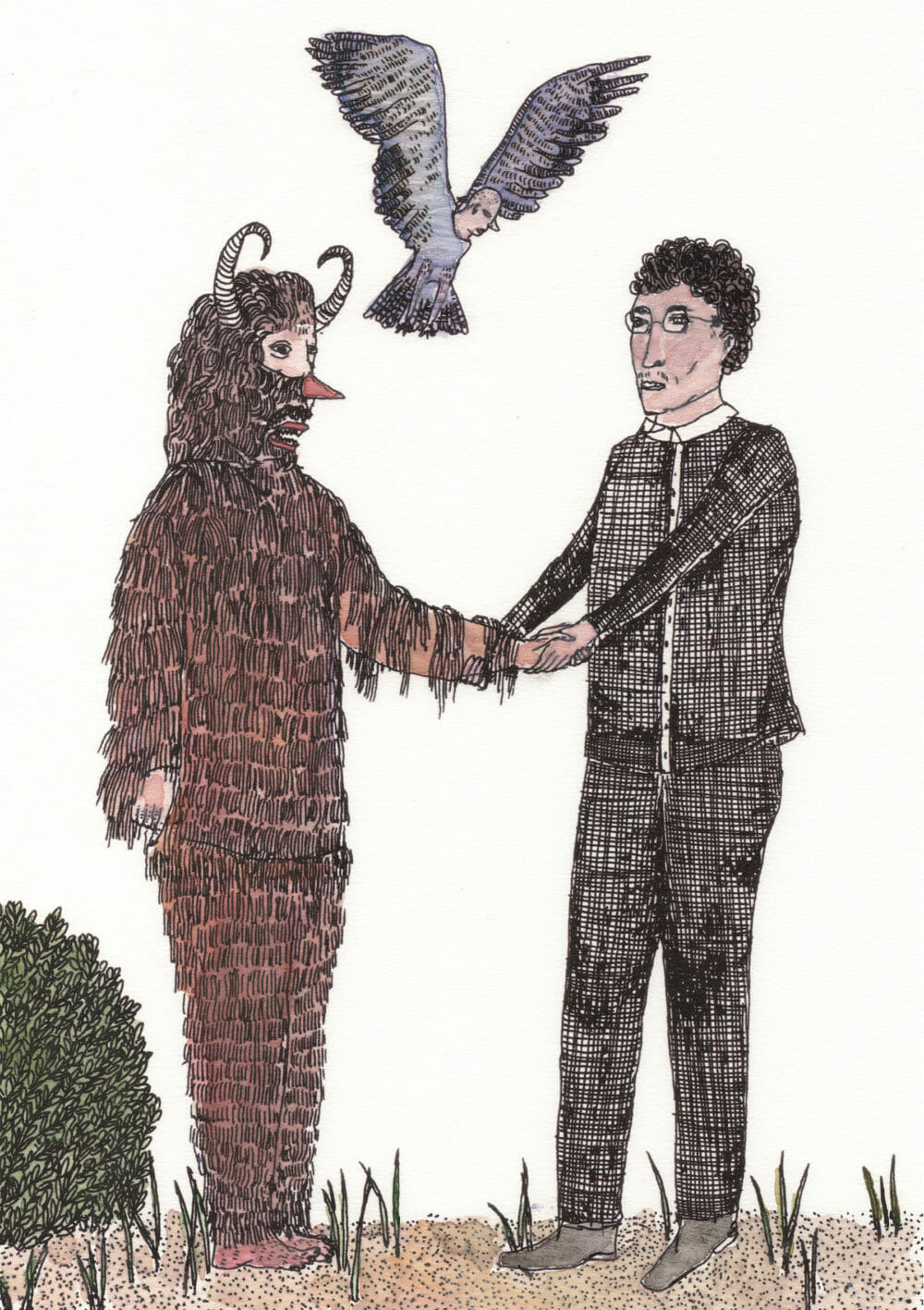 Modernism, Jackson Lears asserts, enthroned human consciousness and “drained the vitality from the rest of creation.” The elements of the natural world—rocks, trees, rivers, and nonhuman animals—came to be seen as inert, passive mechanisms, acting only in response to outside forces. Humans, on the other hand, possessed agency and were capable of acting on their own. This is, however, a difficult proposition to prove or disprove. How can one measure the amount of perceived vitality in the universe and how it has changed over the centuries?

Throwing caution aside, let’s give it a try. One measure of the “vitality” of creation might be the number of gods or spirits thought to exist at a given time. These are slippery, shape-changing entities who do not lend themselves to an accurate census, so we need to be content with the sloppy arithmetic suggested by anthropologists and historians of religion. In the conventional view, the “primitive”—and perhaps original—human picture was of a natural world crowded with spirit-type beings: animals that spoke and understood human languages, mountains and rivers that encapsulated autonomous beings and required human respect, etc. The nineteenth-century anthropologist Edward Tylor termed this view of an inspirited world “animism,” and to this day, indigenous belief systems that seem particularly disorganized and incoherent compared to the great “world religions” like Islam and Christianity are also labeled—or perhaps we should say libeled—as animism.

It is the numbers, though, that concern us here. Animists have a potentially infinite number of spirit-beings to keep them company, amuse them, and sometimes threaten them. In practice, animists single out only certain elements of the natural world as spirits, the ones they feel a particular connection to—or, as an animist might say, the ones that call attention to themselves in some way. The Nayaka people of Southern India include rocks among the inspirited beings in their world but, as a local person informed an ethnographer, “not all rocks.” Nor do all elephants make the cut to spirit-level status. Still, when you include objects, bodies of water, and animals, there is no limit on the number of entities charismatic enough to qualify as spirits.

I know that any talk of “stages” of civilization or religion sets off alarms about possible biases toward Western ideas of “progress.” Still, let’s continue on our reckless attempt to count the number of deities and spirits worldwide, and move on to the stage usually designated as the one “after” animism: polytheism. How the multitudinous spirits of animism congealed into distinct deities is not known, but the earliest polytheistic religion is thought to be Hinduism, arising in about 2500 BCE and still bearing traces of animism in the form of animal deities like Ganesh and Hanuman, as well as in rural shrines centered on rocks. The religions of the ancient Mediterranean world, the Middle East, and the southern part of the Western Hemisphere were all polytheistic, made possible by stratified societies capable of erecting temples and supporting a nonproductive priestly caste.

Aesthetically, the clean lines of monotheism are more congenial to Protestantism than the baroque mess that is polytheism.

So to return to our count: If animism could maintain a spirit population of hundreds or more, polytheism—of the capital-intensive, temple-based variety—generally accommodated only about a dozen major deities, although these were accompanied by dozens of lesser deities, demigods, and figures whose divine origin was contested, like Dionysus. The next “stage,” which dates from roughly 2000 BCE to 700 CE, reduced the number of inspirited agents in the universe, outside of humans, to one.

The rise of monotheism has been almost universally hailed by modern scholars as a great moral and intellectual step forward. Aesthetically, the clean lines of monotheism are more congenial to Protestantism than the baroque mess that is polytheism. The system is also ethically tidy, at least in structural terms: all morally vexing questions are answered by positing that the one remaining deity is the perfection of goodness. In myth, the transition to monotheism sometimes occurred as a usurpation of divine power by a particular polytheistic deity within a larger pantheon: Yahweh, for example, had to drive out the earlier Canaanite gods like Asherah and Baal. Politically, the transition could occur suddenly by kingly decree, as in the cases of the pharaoh Akhenaton, the Hebrew king Saul, and the emperor Constantine. The single God’s exclusive claim to represent perfect goodness (or in the case of Yahweh, fierce tribal loyalty) proved, in turn, crucial in legitimating the power of the king, who could claim to rule by divine right.

But from an animist or polytheistic point of view, the transition to monotheism was a long process of deicide, a relentless culling of gods and spirits until no one was left except an abstraction so distant that it required “belief.” Not everyone went along with the imposition of monotheism. The Egyptians reverted to polytheism as soon as Akhenaten died, while the Hebrew kings fought ruthlessly to suppress their subjects’ constant backsliding to the old Canaanite religion. Within the monotheistic religions, too, there was a steady drift back toward polytheism. The Christian God divided himself into the Trinity; saints proliferated within Christianity and Islam; the remnants of animism flourish alongside Buddhism (which, strictly speaking, shouldn’t be considered a form of theism at all).

From the early modern era onward, “reform” movements rushed in to curb these deviations. In Europe the Reformation cracked down on the veneration of saints, downplayed the Trinity, and stripped churches of decoration, incense, and other special effects. Within Islam, Wahhabism suppressed Sufism, along with music and artistic depictions of living creatures. The face of religion became blank and featureless, as if to discourage the mere imagining of nonhuman agencies in the world.

It was the austere, reformed version of monotheism that set the stage for the rise of modern science, which took as its mission the elimination of the last vestiges of agency from the natural world. Lightning is an electrical charge, not an expression of divine displeasure. The amoeba does not move because it “wants” to, but because it is driven by chemical gradients in its environment. Science did not set out to destroy the monotheistic deity, but it did push him into a corner and ultimately rendered him irrelevant. When an iconic 1966 Time magazine cover echoed Nietzsche by asking, “Is God Dead?” the word was out: we humans are alone in a dead universe, the last conscious beings left.

There was one and only one candidate left for the status of conscious, active agent: ourselves (or more precisely, the European notion of “the self” as an inner core to each person—which notion was being constructed at about the same time that science was condemning God to the dustbin of history). Lionel Trilling wrote that “in the late 16th and early 17th centuries, something like a mutation in human nature took place,” which he took to be the requirement for what Frances Yates called “the emergence of modern European and American man.” As self-awareness took hold, the bourgeoisie bought mirrors, commissioned self-portraits, wrote autobiographies, and increasingly honored the mission of trying to “find” oneself among the buzz of thought engendered by a crowded social world. Today we take it for granted that inside the self we present to others, there lies another, truer self, and that it is fruitful territory for exploration, ideally with guidance from a psychotherapist.

Already the language of self-regard has begun to take on a religious quality. We are instructed to “believe” in ourselves, “esteem” ourselves, be true to ourselves, and above all, “love” ourselves. It is even possible, at least in Japan, for a woman to marry herself, vowing, for example, “to be my Beloved always and in all ways.” Of course, here one enters an endless hall of mirrors: How can the self be known to the self, and who is doing the knowing? Other people can be annoying, as Sartre suggested, but true hell is perpetual imprisonment in the self. The rise of self-awareness in roughly the seventeenth century has been associated with the outbreak of an epidemic of melancholy (depression) in Europe at about the same time, as well as with the emergence of schizophrenia as a recognizable condition.

It is too late to revive the deities and spirits that enlivened the world of our ancestors, and efforts to do so are invariably fatuous. But we can at least resolve to give some space to the nonhuman agents that have managed to survive—animals, for example, and yes, trees. We need to shrink our habitat and re-wild large swaths of the world. And we need also to make room in our minds for the uncanny when it occurs—the flash of sunlight that temporarily transfixes us and lifts us “out of ourselves.” The possibility must be left open that it is a wink from an entity or spirit that we know full well, from both science and monotheism, could not exist.