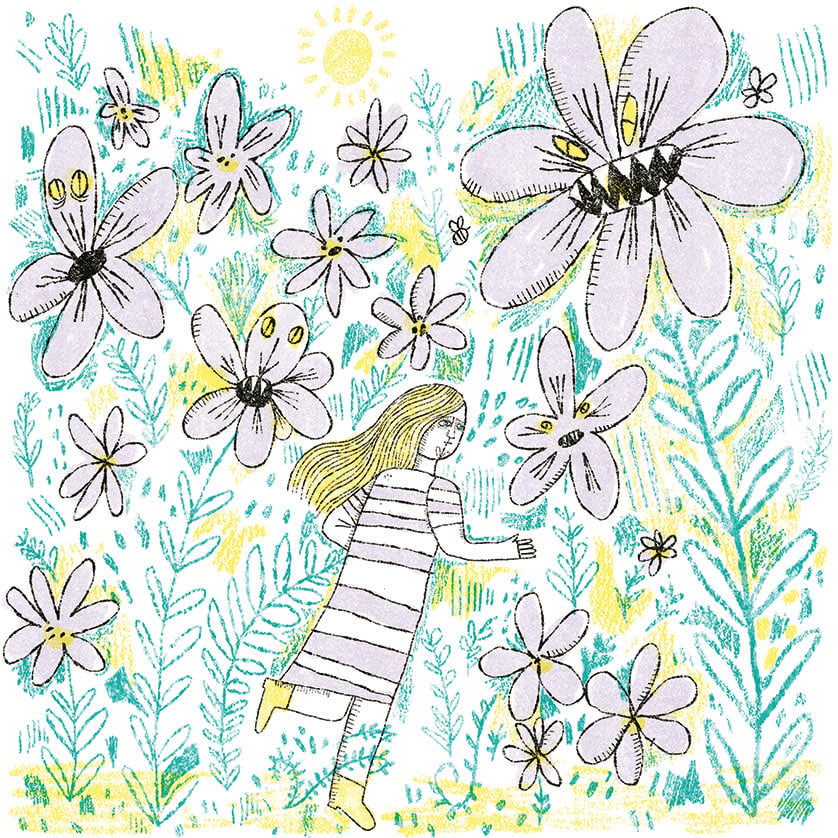 Trigger warning: People who feel it’s their right to never lift a finger may experience pain or discomfort.

My first white-collar job was “coordinator” at my college’s chapter of the Public Interest Research Group—yes, PIRG, mother ship of pie-eyed campus activists. It turned out to be manual labor after all. Nearly all the anticapitalist staff, board members, and volunteers had one or another malady, allergy, or disability that prevented them from fixing the ceiling, running the computer cables, moving the boxes, vacuuming, or cleaning anything. I remember one board member explaining to me how she couldn’t touch the ceiling tiles because she was allergic to fiberglass—it made her itch. Fiberglass makes everyone itch. But with that magic word, “allergy,” she was off the hook.

We endlessly criticized corporate agriculture at the PIRG, but I couldn’t talk about my gardening contracts with my coworkers because images of crawling around in sheep manure, worms, and caterpillars triggered their phobias. So did my stories about plumbing and any carpentry that involved a saw. When I mentioned that I had to drink from garden hoses, a colleague squealed, “Ew! That’s so gross!” She had a “hose phobia.” Allergies exempted this cadre of activists from physical labor. Phobias meant they would never have to hear about it.

As I scrambled up the rungs of the meritocracy, with my supererogatory privilege of four able limbs and all, I noticed ever-newer stylings in the lingo that heavily credentialed people devise to shirk routine labor. It wasn’t only allergies and phobias; it was ADD, ADHD, and PTSD, all of them rampant at my graduate school. There must have been at least six empathy-inducing acronyms for writing is hard, so I refresh my Facebook page all day instead. Meanwhile, every time I walked up the stairs to my new office and passed by the ZAPPY ELECTRIC sticker on the breaker box, I remembered a former lover of mine—an electrician who had rewired the building a few years back—coughing bitterly and complaining about the walls and floors being full of asbestos, which he’d been expected to inhale on a daily basis for eight months.

Installed there as a graduate student, I heard other students in the building complain, whenever workers came in to polish floors, fix radiators, or do electrical work, about the minor amount of dust that they themselves had to inhale—and how the lobby smelled of industrial cleaners. I interrupted one such conversation to say, “This building is full of asbestos; did you know? Just imagine how the guy drilling in the ceiling feels!” Every student in the lobby perked up. “They have us working in a building full of asbestos?!” Ew!

Only those who can imagine escaping their pain bother to complain about it.

And now, with ten years of graduate school under my belt, it’s become my job to guess how to grade papers that come with special slips marked “dyslexia”; those slips mean, basically, that I’m not supposed to judge the writing on the basis of syntax, grammar, or coherence. Of course, the dyslexic papers are always diverse—some have syntactic mix-ups that are clearly symptomatic of the disorder, some do not, some appear simply to be bad papers written by someone who did not read the book, and some are as good as the best papers in the non-dyslexic category. The non-dyslexic category involves a similar spread—a certain proportion have the syntactic mishaps that are the classic signature of dyslexia, most do not, some are terribly bad, and some are great.

What divides students with the special slip from everyone else is not always or only dyslexia. Some students work the system—i.e., have parents who bestow on them a sense of entitlement and access to expensive special health services that it doesn’t even occur to ordinary people to ask for. Disability then turns into class power misrecognized. The rebranding of social and cultural capital via a class-encoded discourse of health allows the privileged student to get ahead with even less merit than before. After all, it is only when pain is the exception rather than the rule that it is noticed; only those who can imagine escaping their pain bother to complain about it, and only those who know the system can have the strength to manipulate it.

Don’t Tell Us Where It Smarts

At the politically correct PIRG, I was said to have “able-bodied privilege” because I did not flinch at the sight of itchy fiberglass. The correlate of such privilege is, of course, “ableism,” a moral disorder akin to racism and sexism that is now a target of efforts to weed out triggering language and expand the definition of trauma on campus. “Triggers are not only relevant to sexual misconduct but also to anything that might cause trauma,” says Oberlin College in guidelines issued to its community. “Be aware of racism, classism, sexism, heterosexism, cissexism, ableism and other issues of privilege and oppression. Realize that all forms of violence are traumatic.”

A doctor’s note that documents a “health issue,” preferably one with a trendy acronym, will save your typically heavily credentialed member of the North American elite from the fatal imputation of harboring a “personal failing.” Like a World Cup striker feigning injuries for competitive advantage, the upper-class disability grifter shamelessly exploits the ideals of fair play for personal gain. This is how all the great games are played at the top. Access to a doctor and willingness to ask for a diagnosis secures for the feint-minded upper-class student the right to stop working (or thinking) when it hurts too much. The sap student who takes the field at face value, meanwhile, will just say fuck it, and drop out.

Such are the privileges of the protected few, hidden even to themselves. My rich colleague at the PIRG thought she had an allergy to fiberglass only because she didn’t know anybody who works with it. The benevolent souls in the office who sneezed during the vacuuming simply didn’t understand that vacuuming makes most of us sneeze. Even if they had understood, it would have been immaterial to them, since they feel entitled to a life without unnecessary sneezing.

To what are the able-bodied entitled? The privilege of lifting heavy objects and inhaling toxic dust? In point of fact, Windex makes everyone dizzy and nauseous, and the PIRG’s rotting ceiling tiles made my lungs burn and my entire body itch. But all this is normal for the able-bodied worker. For years, when I drilled over my head, my shoulder seared with pain, and I would drop my drill from the ladder yelling, “Fuckin’ shoulder!” And then pick it up again. And keep drilling. Bad knees and shoulders were never an excuse to not work; instead of using words like “pain,” we were stuck with euphemisms like “knees are acting up again” and “shoulder’s not cooperating today.”

If the concept of “disability” is to benefit the poor as well as the prosperous, then the word “class” must make a comeback.

Does the gardener complain to her employer that raking leaves blisters her hand? Does the house painter point out that the job ranks in the top five professions for incidence of alcoholism? The job is so goddamned boring, not to mention dehydrating (the drying agent in the paint gets into your system), that drinking or smoking something with a kick all day is the only way to avoid hanging yourself from a scaffold. Who has encountered a special acronym for the tendonitis that afflicts janitors who empty the cardboard coffee cups out of grad students’ trash cans every day? If the janitors do get time off to see a doctor, they are likely to be told they have a bad case of “tennis elbow.”

You see, the assumption behind efforts to eradicate “ableism” seems to be that only some people—people with recognized disabilities, and not, for example, workers routinely in harm’s way—deserve protection from dust, paint, and lifting boxes. Only some people don’t like seeing themselves bleed. Only some people are damaged by inhaling trisodium phosphate. And only some people should get to have their papers graded easy.

If ability is now cast as an unfair advantage, then what is the qualification for academic and professional employment beyond a background of wealth and privilege? When rewarding students on the basis of “ability” is reconceived as a form of oppression, then the only mechanism that prevents the academy from being purely an instrument of class reproduction is made taboo.

I saw a health professional for my bad shoulder for the first time this year, twelve years and four months from the moment I first dropped my drill in agony. I filled out the osteopath’s questionnaire, ticking “no” for every single question—no, I hadn’t had any skiing accidents, for example. The osteopath looked over the intake and wondered, “Where did you get the injury, then?”

I explained that I was a manual laborer for ten years and asked why there were no questions eliciting such information. “Are you sure you haven’t been in a car accident?” he replied. “No,” I said, “gardening and painting will do this to anyone.” He seemed astounded. “Most people with a body this damaged would come in much sooner!” As a matter of fact, most people with such damage never come in at all.

It would be a mistake to throw away the concept of “disabled” (or “differently abled”), and with it decades of struggle on the part of disability rights activists—especially now, when differently abled people of all sorts are increasingly marginalized by the dismantling of welfare states. But if the concept of “disability” is to benefit the poor as well as the prosperous, then the word “class” must make a comeback. After all, the license to stop working “when it hurts” and to attribute shortcomings and mistakes to “health issues” (as opposed to “personal failures”) has constituted class privilege for a very long time. Meanwhile, the majority of the world’s people continue to suffer the unhealthful consequences of building, cleaning, scraping, assembling chipboards, painting, and raking leaves, while the university-minted elites sit around pushing paper, organizing anti-oppression workshops, and refreshing their Facebook pages as they complain about the pathological conditions of their own lives. So long as window-cleaners, maids, plumbers, janitors, food-servers, and others on the lower rungs of the occupational hierarchy are expected to perform the tasks required in their jobs, they will be in pain, and so long as they are paid as little as they are, there’s no escaping it.

Once upon a time, the fragile sensibilities of the rich were lampooned, as in Hans Christian Andersen’s famous fairy tale “The Princess and the Pea”—no one except the royal, tremblingly attuned to discomfort, can feel the pea under twenty mattresses. Today, these shrinking violets present themselves as a vanguard in the struggle against oppression. They get away with it—there aren’t enough manual laborers in their midst to give them a swift kick in the behind.