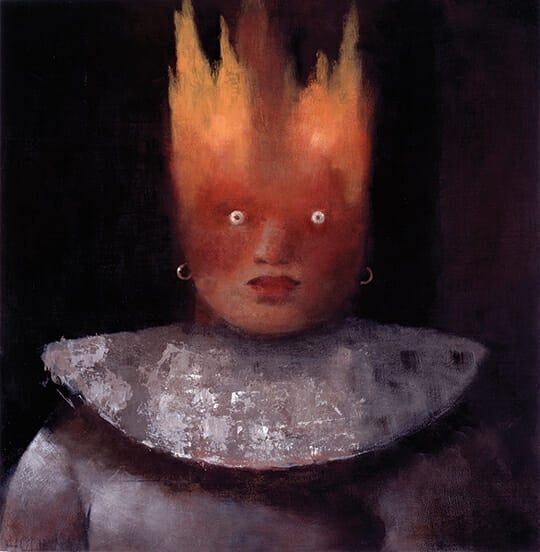 At some point in my predawn walk—not at the top of a hill or the exact moment of sunrise, but in its own good time—the world flamed into life. How else to describe it? There were no visions, no prophetic voices or visits by totemic animals, just this blazing everywhere. Something poured into me and I poured out into it. This was not the passive beatific merger with “the All,” as promised by the Eastern mystics. It was a furious encounter with a living substance that was coming at me through all things at once, and one reason for the terrible wordlessness of the experience is that you cannot observe fire really closely without becoming part of it. Whether you start as a twig or a gorgeous tapestry, you will be recruited into the flame and made indistinguishable from the rest of the blaze.

I stopped at some point in front of a secondhand store, transfixed by the blinding glow of the most mundane objects, teacups and toasters. I could not contain it, this onrush. Nothing could contain it. Everywhere, “inside” and out, the only condition was overflow. “Ecstasy” would be the word for this, but only if you are willing to acknowledge that ecstasy does not occupy the same spectrum as happiness or euphoria, that it participates in the anguish of loss and can resemble an outbreak of violence. At no time did I lose physical control of myself. I may have leaned against a building at some point, but I never fell down. Whatever else was going on—whatever cyclones raged in my brain—the neuromuscular system remained functional throughout.

Then the mundane was back to its old business of turning out copies of itself—one moment pretty much like the one before it—but anyone could see that the effort was hopeless, that the clunky old reality machine would never work the same way again. I knew that the heavens had opened and poured into me, and I into them, but there was no way to describe it, even to myself. As for trying to tell anyone else, should anyone ask where I had disappeared to at dawn—what would I have said? That I had been savaged by a flock of invisible angels—lifted up in a glorious flutter of iridescent feathers, then mauled, emptied of all intent and purpose, and pretty much left for dead?

—from Living with a Wild God (2014), describing a mysterious encounter in Lone Pine, California, in May 1959.