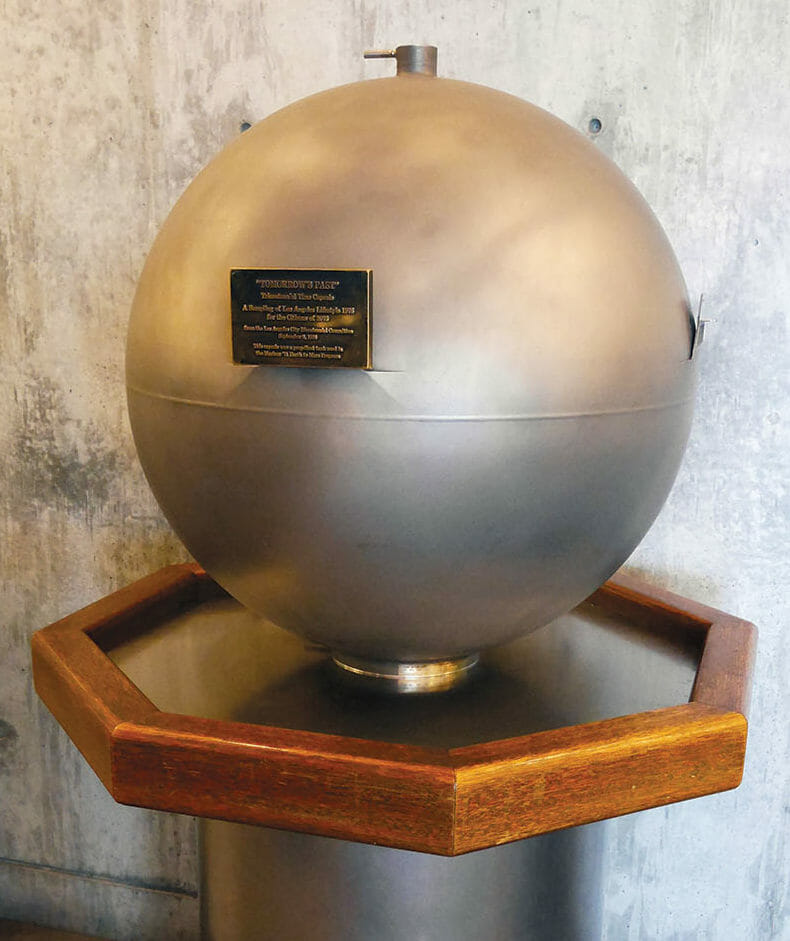 Southern California has always been a place confused about time. The people there escaped the dead hand of the past in municipalities that they conjured, ex nihilo, out of orange groves, and where they built—as Nathanael West mocked in The Day of the Locust—houses resembling “Mediterranean villas, Egyptian and Japanese temples, Swiss chalets, Tudor cottages.” Southern Californians designed rockets by day, then at night burrowed in basement rec rooms, plotting the repeal of the twentieth century. They also backed the ascension of Ronald Reagan, who was the consummate embodiment of their contradictions.

A new film by Daniel Tucker, Future Perfect: Time Capsules in Reagan Country, seeks to capture this warped confusion of temporalities. It takes off from the moment at the 1976 Republican convention when the losing candidate, Reagan, allegedly with total spontaneity, stole the show with a brief speech whose central image was a time capsule to be opened in one hundred years, on the nation’s “tricentennial,” for which he said he had been tasked with writing a letter to be enclosed therein. I spoke to Tucker by phone in April.

Rick Perlstein: The thought that occurred to me while watching the film is that sometimes discussing the future can be a way of evading the present and the past. Did you think about that as you were pulling together these meditations on future-ness?

RP: And a funny part of the film: when people are called on—or businesses are called on—to contribute to this tricentennial time capsule, their paucity of imagination turns out to be almost comical.

DT: Yes, absolutely. You know, the thing that is hilarious and incredible about time capsules is they are obviously a completely unregulated and informal practice. So they have all the formality and ceremony of a burial event, but as far as what actually constitutes a time capsule, it’s a completely open-ended practice. The pivotal discovery of researching this film was writing a formal letter to the Griffith Park observatory [in Los Angeles] asking, “I know you have a tricentennial time capsule. Do you know if by chance Ronald Reagan wrote a letter for it?” And it just so happened that in 1976, the executive director actually had kept the contents list of the time capsule. It is a rare thing to keep the contents list outside of a time capsule. And he says, “Sure enough, there’s a letter from Ronald Reagan in here. And there’s a bunch of other stuff in here!” So we end up going down this incredible laundry list. You know: TV dinners, and six packs of beer, and shoes from Cher, and denim jeans, and the like. And, as you say, the most base-level promotional materials from organizations.

RP: Do you know that the whole idea of the tricentennial was a promotional idea of the right-wing oil conglomerate ARCO?

DT: I had discovered that while working on this video! That ARCO had done a time capsule and solicited all these visions for the future. Coming across some of these children’s drawings of spaceships on Mars and those kind of things—in some ways they’re not that far from Reagan’s own projections into the future.

RP: “Where we’re going we don’t need roads”—you show Reagan quoting that from Back to the Future in one of his speeches.

DT: Exactly. His channeling of that kind of image is so interesting to me because so often, when you’re having an ideological debate about libertarianism or free-market fundamentalism, the first sticking point is, “Well, don’t you drive on roads? Libertarianism isn’t viable!” And sure enough, the president of the United States says we won’t even need ’em.

The practice of burying time capsules, while it’s adorned with all sorts of ceremonial significance, is literally as informal as burying a box in the ground.

RP: Tell me about the baby casket.

DT: One of the things that interested me early on in the research was an article I found in the Los Angeles Times. It had run in 1997, and it was about this Reagan enthusiast who was working on a time capsule for the Ronald Reagan Federal Building in Orange County. And the article made a reference to him not really being able to afford a time capsule. He found them to be very expensive—the kind of pre-packaged ones. So he had enlisted a local funeral home director to donate a casket. But not just any casket—a child’s casket. That would serve as the time capsule to be placed underneath the Ronald Reagan Federal Building! While I was working on the project, I was based out of an art center called the Grand Central Art Center in Santa Ana, less than four blocks away from the federal building. So I knew that while working on this project I would, at the very least, go and poke around and see if I could find the location of the time capsule or find this guy. Sure enough, I ended up tracking down the guy, after the people at the federal building told me there was no such time capsule buried on their property. I tracked him down, this local public historian named Tim Rush, and Tim revealed to me over the course of our conversation that the time capsule never actually got buried; that in fact it kind of fell by the wayside, and he lost all the contents in the process. And then over the course of working on the film, he thinks that he’s found them. Then we go to document him revealing the contents of the time capsule—

RP: Which is like the opening of a time capsule!

DT: Exactly. And then sure enough, by the end of the six weeks between when he discovered them and when we made the visit, he could not find the box of time capsule contents yet again.

RP: You interview the guy who was pretty much one of Reagan’s campaign managers in 1976, who’s not a minor figure! Peter Hannaford, who died last year. I’m pretty well convinced that a central part of this now-founding myth of the Reagan legend, that he gave this spontaneous speech about the time capsule, is BS—that it was all negotiated in advance, and the idea that he was reluctant to do this was dubious at best. So you may have been lied to by Mr. Hannaford.

DT: I pressed him from a few different angles, and he laid out the official line. One of the interesting things about finding my way through this project: several years before, I had interviewed you and [historian of conservatism] Greg Schneider for another video that I’m working on about Karl Hess. I asked you both individually, “Do you know anything about this letter that Reagan references in ’76?” And interestingly, both of you, I think, said something like, “No, never came across it, and I wouldn’t be surprised if it never existed, he made stuff up like that all the time.” And so when I was starting out on this project, I was fully prepared to think that the time capsule was a complete invention. And then, when I start poking around, I find at least somewhat verifiable evidence that there was in fact a letter for a tricentennial time capsule in Los Angeles! But whether it existed, it doesn’t matter, because the brilliant part of it was to conjure up a rhetorical vision of the future—a very open-ended image, granted. And ultimately, that’s the real outcome. Because nobody who is living, and certainly nobody who was living in 1976, was ever going to see that letter, whether it existed or not.

RP: One of the ironic tropes of your film is that people keep on having a hard time honoring the past’s contract with the future: either they can’t find the buried time capsules, or they break ’em open anyway, or they never buried it in the first place!

DT: [Laughs] It’s a great point. The practice of burying time capsules, while it’s adorned with all sorts of ceremonial significance, is something that is literally as informal as burying a box in the ground. And there is nothing to keep someone from being antsy and going and digging it up. On the other hand, the other phenomenon I became quite interested in is how many time capsules have been lost forever. Lost to people’s memory. In fact, in the course of the project, I came across one city, Corona, California, that claimed to have misplaced seventeen time capsules dating back to the 1930s. At one point they made an effort to dig up the time capsules in the 1980s, and they said, “Well, we just tore up a bunch of concrete and could never find anything.”