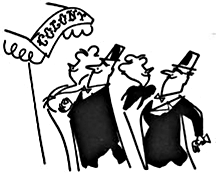 At Ed Debevic’s we’re proud to say that we were one of the first restaurants to incorporate our special brand of entertainment into the dining experience. Since we opened our first restaurant in Phoenix, Arizona in 1984, many other restaurants have come along to offer things like the opportunity to see (but not to touch) various artifacts used in Hollywood motion pictures, the chance to dine in an artificial rain forest, and some will offer a glimpse at a guitar once used by a legend of rock music.

As you read this manual, you will find ideas that you can use to build your own, special character from the ground up.

Although these are all interesting, we offer something that they do not. Ed Debevic’s is Live entertainment. Our customers have come to know us by such names as “the place where the servers dance on the counter” or “the place with the funny waitresses.” It is the incorporation of these elements that has made Ed’s successful and will ensure our success into the twenty-first century. Being chosen as a cast member at Ed Debevic’s means that we believe that you have the ability to be an important part of our continued success.

[T]he wait staff at Ed’s is a breed apart. Clad in vintage clothing and costumes, they look and act the part of greasers, nerds, housewives, and mechanics, just to mention a few.

As you read this manual, you will find ideas that you can use to build your own, special character from the ground up. If you find that you need some help, don’t hesitate to talk to your General Manager or to me, the Entertainment Director. After all, that’s what we’re here for….

As a cast member it is essential that you remember the reason you’re here. In a performance space like ours, the audience is all around you. They aren’t just at the tables in your section but in the tables throughout the restaurant as well as those who are waiting to be seated. We want every one of our guests leaving feeling as though they have “experienced” Ed Debevic’s. That is your job. Share the experience.

When interacting with guests at Ed Debevic’s, your challenge is to make sure that your character becomes part of the punch line of an elaborate, ongoing joke. A greaser, for example, is known for being a tough guy and not so much for his cerebral prowess. What if your character was a greaser who realized that he wasn’t very smart and because of this continually misused big, impressive words in an attempt to cover it up. Another example would be a tired, housewife character who accessorizes her housecoat and dons elaborate makeup in an attempt to appear more glamorous.

The Greaser (Rebel): The greaser personality is one of overcompensation. He overcompensates for his lack of book smarts and social skills with an overdeveloped attitude and physique. For the greaser, the most important thing is being “cool.” The way he walks and talks reflect this emphasis. His movements are slow and contemplative and his walk looks more like a glide. A short fuse is the trademark of the classic greaser but you’ll never hear him raise his voice.

Clad in black leather and jeans, the greaser is always ready for battle. That’s how he takes his life … one fight at time. The only problem is that he rarely knows what he’s fighting for. His wallet has a chain that hooks to his belt loop and he always has a fresh pack of Lucky Strike smokes rolled in the sleeve of his black t-shirt.

Although he is tough, he does have a sensitive side. Perhaps this is part of the reason he maintains such a “thick skin.” On occasion, this “softer side” shows through especially around children or animals. It is the unconditional acceptance that only they can offer that he appreciates.

The important thing to remember about our greaser is that he has a past. He probably spent his formative years seeking the acceptance and approval of others. Failing to do so, he has decided to keep people at a distance and maintain a “I’m O.K. no matter what you think” way of thinking. No matter what, his hair is always perfect. Piled high in a pompadore [sic] and secured with gobs of butch wax or hair tonic giving him the infamous reputation of “greaser,” a name born from the oily appearance of his hair.

Our greaser goes by the name of Spike, but some guys he runs with are named Jake, Snake, Vinny, Rocco, Blade, and Bulldog.

Born to be a Waitress (The Career Girl): Balancing six burgers on her left arm and four baskets of fries on her right, this gal glides down the aisle without losing a pickle. She’s quick, she’s bright, and she loves to talk. Just one lunch in her section and you’ll feel as though you’ve known her for years. She’ll make you feel right at home when she says “Get your elbows off the table” or “People all over the world don’t have enough to eat and you can’t clean your plate.”

Crisp and fresh in her starched uniform, you can tell by the way she looks that she takes her job seriously. She keeps a fancy hanky pinned in place with her name tag and her apron is always secured in back with a double bow. She is truly the model waitress. In addition to a flawless appearance, she can take an order, snap her gum, and wipe down a table, all at the same time.

Our career girl has a particular take on life, not to mention a sense of humor, that only many years of waiting on people can give a person. Talk about your customer complaints, well, she’s heard them all from cold food to cold service. She has worked in more diners, in more states, than she cares to remember but she still wouldn’t trade her job for a chance to meet Elvis.

She may seem a bit “hard-nosed” at times but that nose is always to the grindstone and her mind’s on business because, as she puts it: “I got a stack of bills at home that aren’t about to pay themselves. Until they do, you’ll find me right here, six days a week doin’ what I do best.”

In addition to her uniform and fancy hanky, our career girl wears a waitress’s tiara and comfortable (very clean) shoes. She accessorizes her ensemble with items that reflect her personality (pins, buttons, etc.).

Our career girl goes by the name of Mabel, but she has worked with girls that go by names like Gladys, Edna, Midge, Madge, Ruby, and Marge.

The Tired Housewife: It’s 5:30 A.M. when the alarm shatters the silence. “I’m awake,” she mumbles as she nudges her snoring husband, shuts off the alarm and stumbles to the kitchen, where she puts on a pot of dangerously strong coffee.

As she sips her first cup of the day, she runs down the list of errands that she must get done before she goes to work. Do the laundry, pay bills, go to the bank, drive the kids to school, and make sure that her husband isn’t late for work again this week. When does it all end?

Our poor, tired housewife follows the same routine every day.

Well, her husband gets to work on time and kids are all at school. Now it’s time for her to get to the diner because she has to be able to cover the check she just wrote for the water bill. Needless to say, there’s no time for makeup, and she’ll have to wait until she gets to work to take her curlers out of her hair so a scarf will have to do for now. As she gets into the car, she realizes that she’s still wearing her housecoat. There’s no time to change now, so it’s off to work, curlers, housecoat and all.

On her way to the diner, traffic is much worse than usual, and she ends up getting there a few minutes late. There’s no time now to take those curlers out so she decides to hit the floor and start waitin’ tables. When her day ends here, she’ll head on home and start cooking dinner for her husband and five kids.

Our poor, tired housewife follows the same routine every day. Just imagine how she must feel. Despite her near exhaustion, she finds a smile for everyone and a pleasant “hello.”

Our tired housewife goes by the name of Eunice, but other women on her block are named Helen, Beatrice, Fanny, Alice, and Norma.

The Beauty School Dropout: It’s not hard to spot this beauty queen. She’s the one who applies everything she ever learned at beauty school, to herself, every day (not to mention every cosmetic she ever bought). As far as the hair goes, the bigger the better. Just rat it and spray it. Her eyelashes are long, thick, black, and fake. The only boundaries her eye shadow knows are her eyebrows. Speaking of eye shadow, don’t stop with one color, or matching colors for that matter. Just mix and match.

Despite her ridiculous appearance (never say that to her face) she considers herself the authority when it comes to cosmetic self-improvement. She has a hundred ideas for hairdos and just as many for makeup and nails. She’ll never hesitate to lay them on ya. But whatever you do, don’t take her up on her beauty advice. Before you can blink, she’ll pull out the tools of the trade. They’re never far away. She’ll start clipping and curling, spraying and dying and when the hair spray settles, you’ll look just like her. How fabulous!

This girl is always ready to go to work. She wears her pants skin tight with a pink lab coat (who knows, one day it may be a science) and white socks with Keds. She usually accessorizes her lab coat with a first name initial pin, or her entire first name spelled out in rhinestones. Her makeup is thick.

Our beauty school dropout goes by the name of Babs, but some of the girls in her coloring class are named Dolly, Frenchie, DeeDee, Flo, Pinky, and Maybelline.

I was fifteen. My father and I stood
at the basement threshold, shouting
at each other, maybe the only time.

A Song for a Raised Voice and a Screwdriver

Having climbed into my lap, the accordion
composes
its heavy breathing.      Who
. . .

Vanna of Orvieto
(Italy, d. 1306)
Her heart burned so intensely that she took off all her clothes to pray and still. . .

Art for The Necromancer’s Driver.

Art for Who Owns Vaccines?.

IP-hoarding will prolong the pandemic

Art for The Social Beast.

On the anti-totalitarianism of Simone Weil.