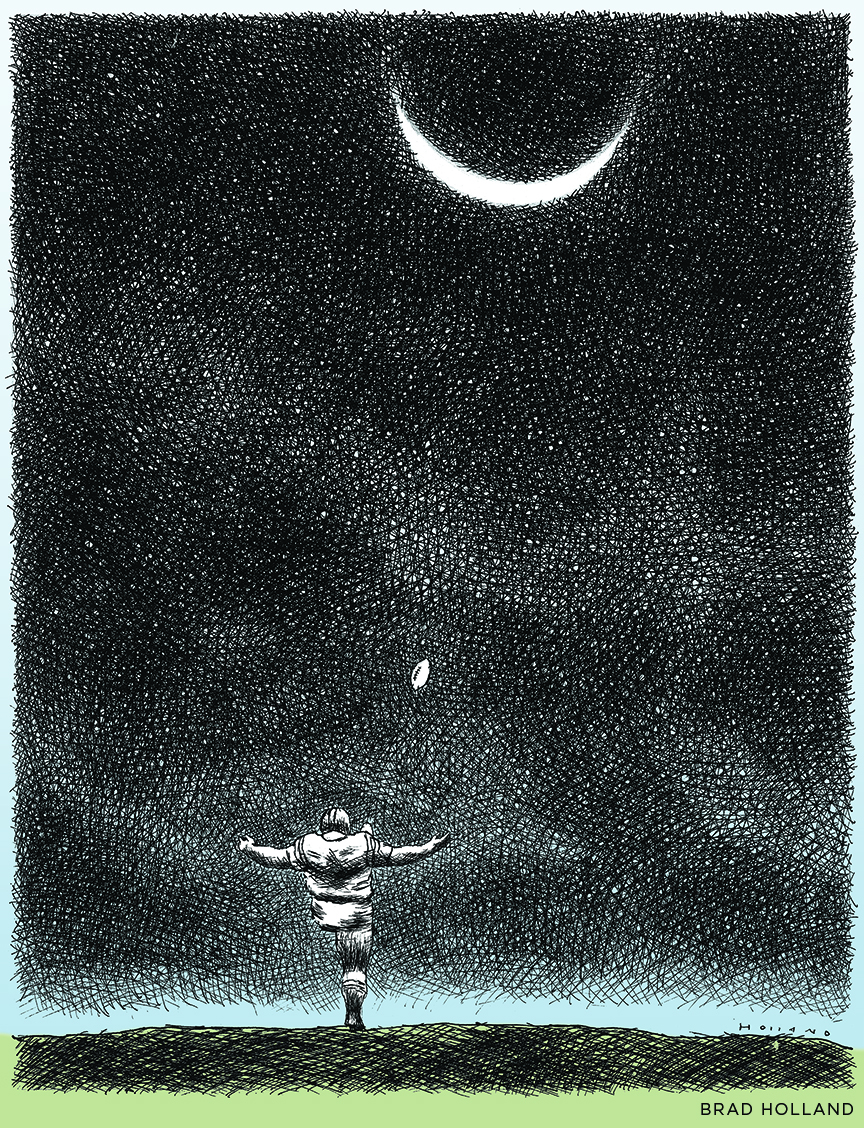 It’s sadly easy to forget all the good Christian work football does. Leaving aside the divine manifestation of a career-ending hit (how else to interpret a pregame prayer that ends in a gametime fractured spine?), there are numerous other examples of the marriage of Jesus and football. And in this season of head-snapping success for the NFL, I think it behooves us to mention just a few. (What’s more, given the skyrocketing rates of divorce, celebrating our strongest marriages is an act of public service, if only to keep hope alive.)

But let’s first deal with the thorny issue of the NFL being a nonprofit, which seems a tad bearing-false-witness-ish. Many, frankly, find it hard to believe. Initially, I was among them, but once I learned commissioner Roger Goodell makes thirty million a year, I found it much more plausible that the NFL isn’t clearing a profit. Besides, if football were lucrative, it simply wouldn’t stand to reason that stadiums almost everywhere are built using taxpayer dollars.

But make no mistake: of all professional sports, it’s pretty clear which one is on the Lord’s side. The NBA, after all, declares an annual war on Christmas with that December 25 game. Major League Baseball is no better, scheduling games on the Fourth of July, which is just a civic war on Christmas. The NHL, for its part, has so many Russians playing in its league that it long ago lost any right to call itself Christian.

There’s plenty of cosmic fate in a football game worth bantering about, such as the perennial theological conundrum of players on both sides of the football praising the Lord for a good play. Obviously, the Lord can’t be favoring both sides of a conflict, but for marketing purposes, it certainly benefits the Lord to have both sides praising Him; it’s sort of like the Nike swoosh on opposing uniforms. Then, too, we never can know who the Lord favors, so it really is in our best interest to assume that the Lord loves both sides equally, un-Christian-like in a football way as that may sound.

It was Fisher DeBerry, former football coach at the U.S. Air Force Academy, who famously hung a Fellowship of Christian Athletes banner in the team locker room that said, “I am a Christian first and last . . . . I am a member of Team Jesus Christ.” If the banner offended Jewish, Muslim, or atheist athletes, well, those athletes needed to ask themselves what they were doing in that locker room in the first place. After all, it wasn’t some state school locker room; it was the locker room of the U.S. Air Force Academy, and the bond between our savior and our military shouldn’t come as a galloping shock to anyone any longer. Furthermore, the banner spoke the unvarnished truth. You see, not only was Fisher DeBerry a slave to Jesus, but he was also a servant of the truth. After Coach DeBerry hung that banner, his team lost to TCU, most of whose starters on defense were black. DeBerry candidly admitted, “Afro-American kids can run very, very well.”

Back to the NFL: Yes, the noble league apparently knew its game was destroying the brains of its players and kept it a secret, but hey, when was the last time any of you told the painful, unvarnished truth to your children? And aren’t men who play a game for a living children of a sort?

And I don’t say this pejoratively. After all, Jesus said that we must all be as children to enter the kingdom of heaven. What’s more, no matter how battered, broken, or concussed a football player is after a game, don’t you always see him joining others in the center of the field for a prayer? So, sure, football has done some bad things. Who among us hasn’t? But none of us should be casting any stones, although drilling an opponent in the sternum or kidney with our helmet won’t draw a flag.