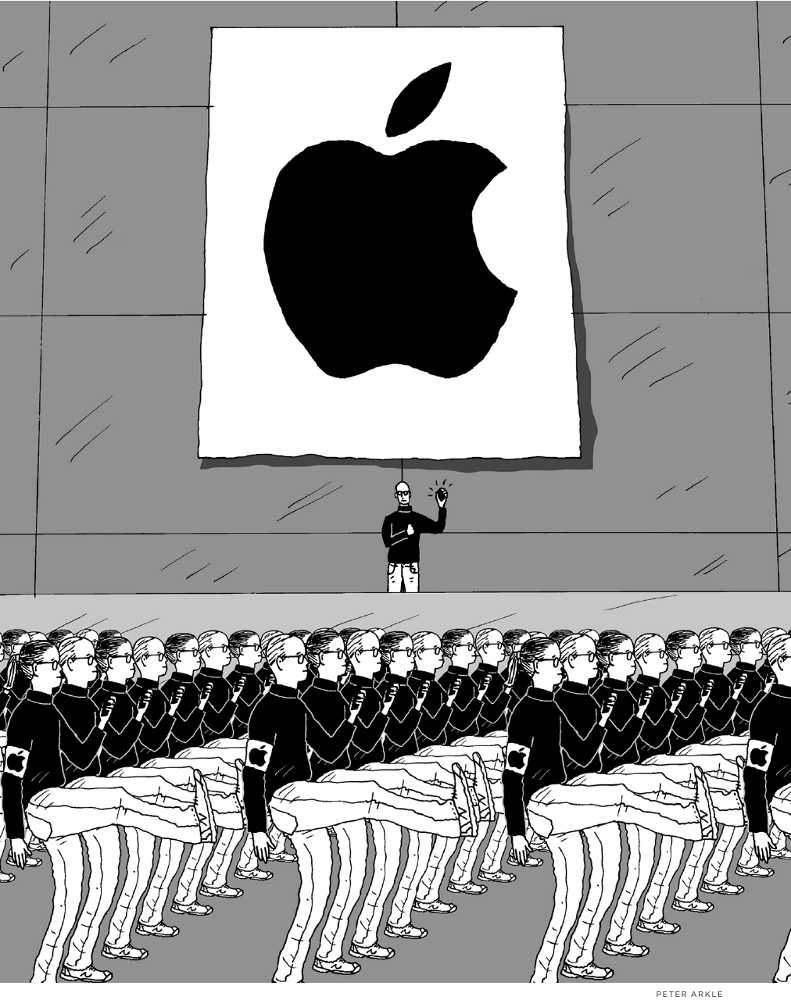 Once upon a time the iPhone was to digital photography what Steve Wozniak was to the samba: it could perform, but it wasn’t pretty. But then Synthetic, LLC, a tiny design consultancy turned app maker, released Hipstamatic. Recognizing that the iPhone could never go pixel-to-pixel with a $3,000 Canon dSLR (or even a $300 Cyber-shot), Synthetic’s co-founders Lucas Buick and Ryan Dorshorst virtualized the device into a piece of junky, mass-market plastic from the seventies. The Hipstamatic interface mimicked the look of a Kodak Instamatic and allowed users to choose from an assortment of simulated lenses, film formats, and flashbulbs, all with the intent of producing artfully haphazard images. A Hipstamatic snapshot looked blurry, discolored, scratched, oversaturated, dark around the edges, faded, splotched, speckled—or, ideally, all of these. “Someone said that Hipstamatic took a shitty photo and made it shittier,” Buick told a group of journalists at Synthetic’s San Francisco headquarters in December 2011. “That was my favorite review.”

Synthetic, along with embracing the limitations of the iPhone’s camera functionality, imposed limitations of its own in its effort to recreate the experience of using an analog camera. Instead of using the iPhone’s entire screen to display whatever scene a user intended to capture, the Hipstamatic showed that scene only through a small, simulated viewfinder, made users wait for a moment, as if the photos it took were developing, and offered no “undo” function or edit photos after the fact. Once you committed to a lens, a film format, a flashbulb, you got what you got, just like the analog world.

Hipstamatic suggested a retrogressive appeal. It evoked a simpler-is-better past, an age where cheap, mass-produced plastic cameras were built to last.

Apple added Hipstamatic to its App Store on December 9, 2010—and it was an instant hit. “I stayed up for the next thirty-six hours straight to watch the sales,” Buick says. He and Dorshorst invested a grand total of $300 in developing Hipstamatic, some of which went toward Apple’s iOS Developer Program kit—and a bit more devoted to a fake blog detailing Hipstamatic’s ostensible genesis as a real-world plastic camera produced in limited quantities in the early eighties. (The creation myth furthered the latter-day hipster quest for authenticity through tragedy; in the introductory blog, readers learned the device had been hatched by two brothers from Wisconsin who were killed by a drunk driver before fully realizing their entrepreneurial vision.)

But with the appeal of the app pitched at showing rather than telling, Hipstamatic didn’t need much of a marketing push. On its first day, Buick says, it was the bestselling app in Japan. A few weeks later, Apple featured it as a “new and noteworthy” product. Justin Timberlake and Tom Hanks reportedly shared Hipstamatic photos online, while the New York Times featured Hipstamatic photos of soldiers in Afghanistan on its front page. Apple reaffirmed its love for the product by declaring it its 2010 App of the Year.

Rarely, if ever, had the Japanese, Steve Jobs, young Hollywood, old Hollywood, and America’s paper of record ever shown such a tastefully curated consensus. The rest of the world took note. In 2010, Synthetic sold more than one million copies of its basic $1.99 app, plus lenses, film formats, and flashbulbs bundled as “Hipstapaks” and sold for 99 cents each.

In July 2010, the two founders, who’d met at the University of Wisconsin–Stevens Point while pursuing degrees in graphic design, moved to San Francisco. In December, they purchased a two-story building built in 1908. Fittingly enough for a company that has given new life to some of the design touches associated with the most famous corpses of analog photography, its new headquarters had passed much of the twentieth century as the warehouse for a coffin manufacturer.

In its current incarnation, the building has concrete floors and brick walls. Weathered wooden beams run across the ceiling. The first floor is essentially set up as an art gallery, except that all the carefully hung artworks decorating the walls are framed advertisements for Synthetic’s newest app, something it calls Hipstamatic D-Series. At a recent launch event, Lucas Buick offered a recap of Synthetic’s history to date before unveiling the new product, but he didn’t seem all that driven to turn art, or more broadly, human expression, into commerce—at least not by contemporary Web standards, which hold that every tweet and status update is fair game for consumer profiling and targeted advertising.

No, Synthetic’s business strategy seems pretty vintage, as quaint as a washed-out Polaroid snapshot of toddlers selling lemonade from behind a card table on their front lawn. It makes software and it charges a small fee for it—how 1987! Synthetic has twelve employees, and as one slide in Buick’s presentation stresses, the company has never sought out nor received any funding from venture capitalists. It sustains itself the old-fashioned, nostalgic way, by generating more revenues than expenses. It’s artisanal software, hand made by art-school hipsters who appear to like the paychecks and perks that come with platinum app sales just fine—but they aren’t hellbent on turning their millions into billions.

And that’s one reason the freshly debuted Hipstamatic D-Series may be a little more interesting than it initially seemed. In his launch talk, Buick calls the app “the world’s first social camera.” To position it, he describes the ways disposable cameras are used at wedding receptions. Cameras are placed on tables, guests take turns shooting photos on them, and at the end of the night, the cameras are collected for the bride and groom, who then have a record of their big day, shot from multiple perspectives. “What if there was a way to shoot together like that digitally?” he asks.

D-Series facilitates this. A single user downloads the app, which Synthetic will be offering for free at Apple’s App Store. After that user acquires the app, he invites others to “share” his virtual camera with him. If his friends accept the invitation, they’re able to access the camera on their own phones and take photos with it as well. While you can invite an infinite number of people to a single camera, the film roll that comes with the camera includes only twenty-four virtual exposures. Once a group of users takes twenty-four photos, the camera no longer works—the “D” in D-Series stands for “disposable.” And only when all twenty-four photos are taken do the users get to see any of them—a complete album is sent to their phones, and each person can post them to Facebook or Twitter, delete them, whatever.

In part, the new software is an answer to Instagram, a similar app for the iPhone that debuted nearly a year after Hipstamatic but that now has a user base of more than fifteen million registered users, along with $7 million in funding from a number of Silicon Valley’s A-list venture capitalists. One reason Instagram grew so fast is because it’s free. Another is that in addition to letting you post photos to multiple platforms like Facebook and Twitter, Instagram also functions as a standalone social network on your phone. You can follow other Instagram users the same way you can follow users on Twitter, comment on their photos, search for Instagram images based on keywords, and so on.

Finally, Instagram makes no effort to simulate the photo-taking experience of analog cameras in the way that Hipstamatic does. When you take a photo using Instagram, you see the image on the iPhone’s entire screen. You apply its filters after a photo is taken, and if you don’t like the results you get, you can undo your efforts as many times as you like and try again.

In debuting its D-Series app to a shared community, Hipstamatic has edged closer to the Instagram model, but in embracing the notion of disposability, the company has struck a (modest) blow for finite expression in our info-glutted, digital age.

In addition to offering the free version of D-Series, which includes only one lens, one film format, and one flashbulb, the company offers D-Series cameras, which have different components and thus produce different effects, for 99 cents each. But remember, these are disposable cameras—shoot twenty-four photos and your camera stops working. If you want more film, you’ve got to pay another 99 cents.
In a digital realm that has turned legions of quixotic entrepreneurs who dreamed of charging once for their content into beaten, broken shells of their former selves, Synthetic aims to charge its users twice, three times, a hundred times. And in a medium where content persists indefinitely, where the past is almost as closely at hand as the present, Synthetic wants to introduce disposability as a driver of profit. It’s a clever piece of conceptual art, from a company that is at least as intrigued by the intellectual and artistic ramifications of its business decisions as it is by its earning statements.

The potential for blowback is large. Many app users think $2 should buy them unrestricted usage, bug-free updates, lifetime satisfaction. And Synthetic now wants to charge them 99 cents for a roll of film that doesn’t actually exist. And, for all its immateriality, is kind of skimpy too—only twenty-four photos!

Over the last decade or so, as digital photography vanquished analog photography, analog photography has been fetishized in the way that dying technologies invariably are. Oppressed by ease of use, an infinite capacity to make images at no cost, endless post-processing options, and all the other upsides of digital image-capture technologies, contrarian shutterbugs sought solace in analog survivors like the Holga and the Lomo LC-A, which produced images that were often marked by lens flares, vignetting, double exposures, and other unpredictable glitches. Such characteristics, their advocates insisted, added a sense of warmth and spontaneity, an organic, humanizing touch to a medium that was getting a little too infallible.

When Hipstamatic appeared, it catered to such notions, but it mocked them as well. It automated serendipity and chance imperfections. It made ubiquitous the sort of imagery that the Holga and the Lomo LC-A were able to produce only in sporadic fashion, and in doing so, it revealed that such imagery had been valued in part for its rarity instead of just its aesthetic virtues alone. When it was everywhere, it lost its charge. How could blurry, oversaturated cityscapes retain their sublime tastefulness if people who didn’t have degrees from RISD or Cranbrook were admiring them—or, worse, producing them?

By marketing hipness, Hipstamatic devalued it. And yet here now is Hipstamatic D-Series, emerging as a potential antidote. The problem with the web and its associated technologies is that they have made it so easy to share information about ourselves that doing so begins to feel like an obligation, a sentence, a Sisyphean curse: another day, another photo of lunch to post. Unless, of course, we’ve already spent $20 on virtual film this week and can’t afford to buy anymore until Monday. What Hipstamatic D-Series makes clear is that scarcity can once again be ours. We just have to be willing to pay for it.