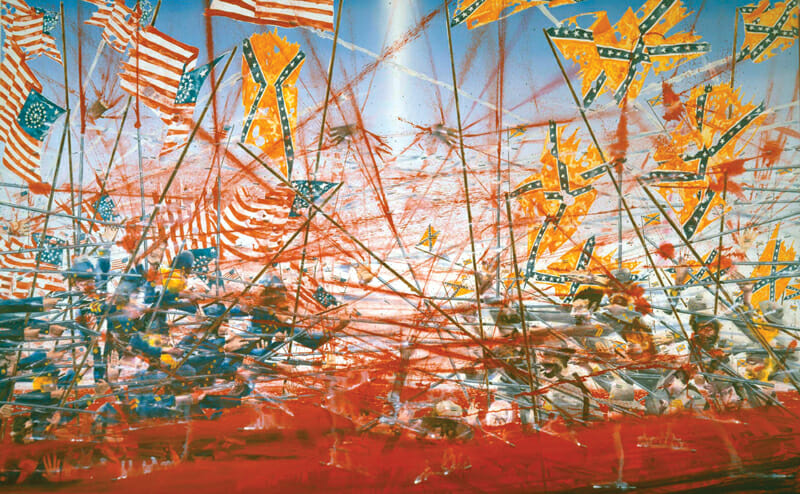 Early on a Saturday morning in May, I pulled off a highway in northern Virginia and drove into an imagineered Civil War past. Across from a stately old plantation stood some reconstructed slave quarters, and just past them I found the designated encampment. On this particular day, Sully Historic Site—“an oasis of the past,” as its website boasts—was the recon point for a group of equestrian reenactors arriving for the weekend’s big event: a commemoration of the Grand Review of the Armies on the 150th anniversary of that final, ceremonial mustering of the victorious Union forces as they prepared to demobilize and return home.

Taking place over two days in May 1865, the original Grand Review was a victory lap for Northern soldiers relieved to have emerged from the war in one piece. Generals Ulysses S. Grant and William Tecumseh Sherman led some 150,000 troops in a procession from the Capitol down Pennsylvania Avenue to the White House. President Abraham Lincoln had been dead just over a month; the black mourning banners had been taken down only a few days earlier. “It was the moral sublimity of the scene which lifted it above all other spectacles witnessed in our time,” an observer recalled.

But the Review did not include any of the 200,000 men, mostly escaped or emancipated slaves, who had served in the United States Colored Troops (USCT) during the war. Their late entry into combat helped break the war’s stalemate, but just days before the Grand Review, military officials sent away the only USCT regiment in the vicinity of Washington, D.C., to patrol the border with French-occupied Mexico.

Here was the appealing premise of the event in May: while most reenactments mimic the past as closely as possible, the Grand Review Victory Parade, as it was called, aimed to “correct a great wrong in history” by inviting USCT reenactors and descendants to march as their ancestors could not. It offered a reenactment produced by and for the representatives of those with the most plausible claim to recognition as the “winners” of the Civil War.

It speaks volumes about the rickety state of our national memory that even some participants in the Grand Review commemoration seemed to be only dimly aware that it had been convened to publicize (and, symbolically, to rectify) a tremendous historical wrong. Within minutes of our meeting at the campsite, Barry, an elderly soybean farmer who drove in from Iowa, proudly told me that he volunteers to give presentations on “the Southern side of the war” to schoolchildren across the country. He points out to their teachers that Common Core standards in national education policy represent the same kind of illegitimate imposition of federal power that caused the War Between the States. Barry firmly believes another war is coming. “How many weapons you got?” he asked me. I told him my domestic arsenal is bare. “You ain’t gonna fare well,” was his oddly jovial reply. When I mentioned offhandedly that the event’s host and organizer was the African American Civil War Memorial and Museum, Barry just stared at me blankly.

A few hours later, as I stood outside the museum, I met a young reenactor and volunteer named James, a descendant of both slaves and slave owners, who offered a different account of the war’s legacy. James told me that just two days earlier he had been walking to work—“wearing a shirt and tie, mind you”—when, immediately in front of him, one white man robbed another and took off. The victim yelled “Thief!” but instead of chasing the assailant, two cops standing nearby shoved James up against a brick wall, assuming he was the perp.

“Reenacting the Civil War, to me, is a blow to the myth of white supremacy in this country,” James said. “It gives you a different image. The USCT were black men with rifles, and they changed the world.”

At the Mall in D.C. the next morning, it became grimly apparent that his was an unpopular opinion. The event’s organizers had projected that as many as ten thousand reenactors were expected to turn out, but that count appeared to be off by at least several thousand. Even the spectators on Pennsylvania Avenue were often outnumbered by pedestrians and tourists who seemed serenely oblivious to the black men in blue marching with muskets and singing “John Brown’s Body,” a display of true moral sublimity if there is such a thing.

I can’t be sure that what looked almost like a boycott of the Grand Review Victory Parade was actually a repudiation of the event’s pro-USCT revisionism—the reenactment was staged three weeks after Baltimore was convulsed with the Freddie Gray protests—but it’s a safe bet that the sparse attendance stemmed from the reluctance of Confederate sympathizers in the reenactment community to “galvanize” and swap their gray uniforms for blue. Then again, there may be an even simpler explanation: the Grand Review marked the inauguration of peace, while your average reenactor tends to worship war.

At the end of the parade route—in Freedom Plaza, near the White House—a crowd gathered around a replica grandstand, many in period costume, including an exquisite Frederick Douglass. In an online posting months before the event, the museum had solicited “requests for period impressions to be a part of the Reviewing Stand.” But the organizers had added one caveat: “No Lincolns please.”