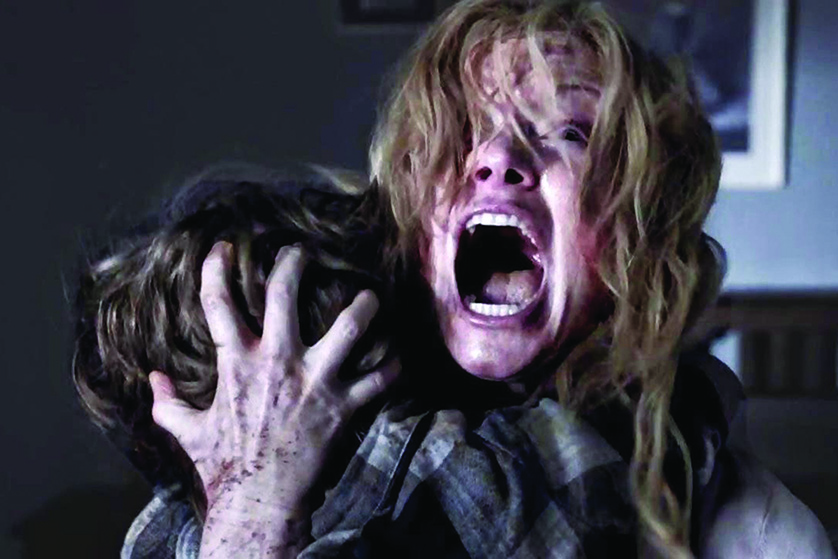 From Rosemary’s Baby to The Exorcist to Carrie, many of the finest horror genre standards fixate on the ways mothers make monsters of themselves or their progeny through neglect or abuse, through mistake or design, and in their most chilling incarnations, through mundane means. When 2014 Australian indie horror flick The Babadook hit American shores in November, most of the attendant commentary zeroed in on just such maternal themes. Bitch Magazine took it as a meditation on post-partum depression; Slate located its effectiveness in its dark treatment of common parental miseries. Both were probably right, but there’s more to the creeping menace of The Babadook than the regulation Freudian freakiness of motherhood.

The Babadook follows young widow Amelia and her troubled tot Sam as they discover a disturbing book during a nightly bedtime reading and unwittingly unleash its sinister central figure on their quiet lives. As it turns out, the key to the creature’s undoing is merely to recognize it and rebuke it—something that Amelia eventually discovers. But this revelation comes after a slow-burning, suspenseful battle of wills, prolonged by a centrally important fact about Amelia that critics have largely overlooked: she is working class.

Clues to Amelia’s class status are scattered throughout the film, but they’re most clearly manifested in conspicuous articles of fashion. Minutes into the film, Amelia sits across from the administrators of her son’s private school, who are all neatly outfitted in crisp suits and slick buns. She is sporting an unraveling ponytail and the uniform she wears to work as an orderly in a nursing home: a papery pink shift with a peter-pan collar and opaque white stockings that taper into a pair of scuffed Keds. Amelia’s clothing is conspicuously gendered—the powerful actors in this horror story don’t wear pink collars and Keds. But more than that, her attire functions as a permanent reminder of the fact of her work, a kind of stigmata of the service sector.

All the dramatic action among the film’s adult humans proceeds to flow from this core disjuncture of class. The school administrators condescend to her in icy-precise professional language, telling her, in so many words, that she has failed to correctly parent her son. And in the next scene, Amelia sits next to her sister, a smooth-haired woman in black nylons and a blazer, and barely listens as her upwardly mobile sibling natters on about installation art pieces. Miffed by this indifference to her class ascent, Amelia’s sister abruptly calls off the joint birthday party they had planned for their children. This leads to a round of pointedly class-based recriminations, all upbraiding Amelia for not “properly” celebrating her son’s birthday.

Mom-shaming is powerfully distilled in the unraveling nightmare of
The Babadook.

Hounded as she is by these disciplinary markers of privilege, Amelia takes momentary refuge in fantasies of material bliss. In a brief dreamy interlude just before her niece’s birthday party, Amelia eats ice cream in a glassy, modern shopping mall, sitting alone on a sofa positioned in front of windows full of fashion spreads and mannequins draped in haute couture. Unable to shop or buy, she contents herself with food—alone.

Back in real life, however, Amelia continues to face more quiet but powerful crucibles of class division. When the birthday party arrives, five sleekly outfitted moms congregate in Amelia’s sister’s Crate & Barrel dining room and gaze accusingly at Amelia through their chicly underdone makeup. Pearls and gems dot their lobes and throats; our Amelia positively wilts in their presence, looking dazed and bedraggled as she listens to patronizing talk of their volunteer work with “disadvantaged women” and to humblebragging about their husbands’ careers. The pinched scowls only intensify when Amelia’s son throws a tantrum and she sternly orders him out of the room.

Amelia is overwhelmed: it is, in part, her exhaustion that allows the dreadful Babadook to pass into her life. A string of visual cues reminds viewers of her inability to keep up: her clothes, her hair, the puttering station wagon she drives, the blandly functional flat-soled shoes on her feet. As the movie slides into the gothic terror at its heart, it’s just as plain that the totems of her everyday working-class life are what feed her primal, and potentially lethal, state of social isolation. They differentiate her from her peers, their pastimes, and most crucially, their enlightened parenting practices.

Here is where The Babadook is most painfully realistic. So many parenting techniques earn their cachet from the glamorous elites who evangelize for them: think The Big Bang Theory’s Mayim Bialik hawking the wonders of co-sleeping for The Today Show, or supermodel Gisele Bündchen asserting that international law should require all mothers to breastfeed for at least six months in a luscious Harper’s Bazaar spread. Mothers who can’t pay to play are not only reviled as bad parents, but also marginalized as gauche.

There’s an overlooked irony at the heart of all the mom-shaming so powerfully distilled in the unraveling nightmare of The Babadook. Amelia and her imperiled son are ultimately helped onto the right path out of their lonely ordeal not by all the well-appointed power moms hovering around them, but rather by the Australian welfare state. As the film closes, a pair of dogged social workers checks in with the traumatized pair, and the realization sets in that these have been the only characters to evince real concern for the well-being of this single working mom and her deprived child.

Beyond the claustral terrors of a classic horror-fantasy, The Babadook leaves us with a surprisingly far-reaching epilogue: the film leads us to imagine the kind of programs that could make life as a working-class parent more leisurely and secure, like child allowances, paid maternity leave, and all the sundry baby benefits that are commonplace in European social democracies. Ladies who lunch seem capable of providing only bitter censure, and good politics, with concrete material assistance, will have to be in place before the rest of us can gather the few pearls of wisdom their parenting fashions offer. This is the real horror story of The Babadook: our culture is at a loss to make the hopeful epilogue to Amelia’s story match up with the kind of social isolation that spurred on her brief descent into madness and terror.