The terrible day after the first presidential debate, weak-chinned Jason Miller, hair gelled, pocket handkerchief in place, set about being a surrogate for the Trump campaign. His strategy, which mostly involved deflecting or talking over MSNBC interviewer Chuck Todd’s questions, followed the same playbook as the one employed by his Dear Leader, Trump himself. Instead of telling viewers why Trump refused to condemn the far-right goons known as Proud Boys—while at the same time claiming his message to them had been “stand by the wayside, get out of the way”—Miller called Joe Biden a “swamp creature” and a “grifter.” He, too, failed to explicitly condemn the Proud Boys.

The exchange, segments of which were replayed around the web, reveals the strategy the president and his army of minions have devised to bully their way into another four years. To interrupt and interrupt and interrupt again is the name of their game; yelling, shouting, and glowering are added as accompaniments to heighten its acidic flavor. A livid Trump modeled it well on the debate stage; in the excruciating hour and a half, the president interrupted former Vice President Joe Biden or moderator Chris Wallace at least 128 times.

There is pathos and tragedy in what happened at this week’s debate, a real-time depiction of the wreck and ruin that is the American polity at the moment. Some Americans have buried their heads in the sand against the caustic clamor of the moment (ratings plummeted this year); the rest, exhausted, depleted, and emotionally fragile, find themselves dragged ever deeper into the muck of depravity. At the end of the debate, the first word CNN’s otherwise prim Dana Bash could think of to describe what had transpired was “shitshow.”

I cite Bash’s use of the word because it presses the question of what consuming large, gulping quantities of Trump venom is having on American women. Trump’s brutal presence in the office of president undoubtedly affirms and emboldens the behavior of every abusive white male in America and even the world. With toxic masculinity installed in the White House itself, America’s women, all  constantly subject to Trump’s unending storm of verbal rubbish, have been left bereft. It is not surprising that the election in November is expected to reveal a history-making gender-gap between men and women. A recent poll found that among women, Joe Biden leads Donald Trump by a gaping thirty-one-point margin.

It makes sense: women are quite familiar with the interrupt, interrupt, and interrupt again strategy. Indeed, they confront it every day in any setting. As a brown woman, I have experienced interruptions in boardrooms, in classrooms, in Zoom meetings, on panels, and even (seriously) at poetry readings. White men, although not only white men, appear to be born with the conviction that every opinion they have must be shared—that they, the long-christened Kings of All Discourse, can say it better, much better, than any woman alive. Watching Trump on stage resurrects every similar moment: the pushy, bossy, heated words of white men marching across the stage in a lurid tableau of boorish arrogance.

There is pathos and tragedy in what happened at this week’s debate, a real-time depiction of the wreck and ruin that is the American polity at the moment.

If you were not properly destroyed by the rabid chaos of constant interruptions, there was also the threat of neo-Nazi violence. A rapaciously livid Trump, sweaty from his efforts, refused yet again to condemn white supremacy. Even when Biden supplied a name, the Proud Boys, the best Trump could muster was the ambiguous “stand back and stand by.” It was not new, this reticence to condemn, but it was still stunning. For the record, the Proud Boys are a far-right neo-fascist group of self-described “Western chauvinists” who believe that Western civilization and people are superior to all others. They are considered by the Southern Poverty Law Center to be a hate group, with a record of racism, anti-semitism, Islamophobia, and misogyny.

The Proud Boys, for their part, felt intensely proud of what Trump said. They did not interpret his comment to mean “stand by the wayside, get out of the way,” as Jason Miller claimed. Within minutes of Trump’s remark, which was touted as “historic” by members of the group, they reported a spike in “new recruits.” Within hours, they were selling T-shirts with the new logo “Stand Back and Stand By” (although Amazon and Teespring moved quickly to remove them) and had launched a recruitment drive aimed at capitalizing on the millions of Americans they were able to reach thanks to the president.

The rest of us were left not proud at all. Brown and certainly Black people asked themselves what sort of exit plan they must construct to protect themselves in the event that such extremist groups, further inflamed by the president, took to attacking their homes. Insolent as always, Trump not only refused to condemn neo-fascist groups, he also refused to provide any assurance that his supporters would not take to the streets after the election in an orgy of debacle and destruction. Their targets, undoubtedly, would be just the sort of people white supremacists consider inferiors and outsiders. In the face of such cataclysm, there are no answers for Black and Brown people.

In the aftermath of the debate, Trump played his usual have-it-both-ways game. Having sent the message of approval to his shock troops, he then claimed on Wednesday he didn’t know who the Proud Boys were. And by Thursday, he appeared on Fox to tell Sean Hannity, “I condemn all white supremacists. I condemn the Proud Boys. I don’t know much about the Proud Boys, almost nothing. But I condemn that.” By the end of the week, of course, the news cycle had moved on, and attention shifted to how the president will hold up, now that the coronavirus has apparently caught up with him.

There is a pall of shame that hangs over the United States in this current moment. A nation whose democratic institutions were once thought stable and strong, even impenetrable against the infestation of authoritarian bilge, has proven fallible and even frail. The wreckage is everywhere, and on Tuesday evening it scattered and splintered on a stage in Cleveland. It is a fool’s wish to imagine that an election will provide a solution to this, will erase the truth that there are people who wish ruin and ruination on those who are not white. Nor will the burden of misogyny, sewn with such vigor into the language and norms of the nation, be eliminated by the election of a new leader.

On that terrible day after the debate, Trump held a rally in Minnesota, and told the crowd that Biden will “inundate your state with a historic flood of refugees.” Naturally, he fixated on Minnesota Congresswoman Ilhan Omar, falsely accusing her of harvesting ballots, prompting the crowd to chant “lock her up.” As with Trump’s debate performance, his efforts are never directed to reassure or reinvigorate. They are aimed to spread fear of false threats—while he pretends to be invincible against the very real one afflicting the country, and now him. “Go to the polls” and “watch very closely,” he told his followers. The people to be watched are American voters, particularly those who are not white, and the charge Trump has set to his followers is to enact mini-theatricals of Trumpian fury and intimidation at every polling place. The debate was a preview of this; an administration bloated and bulging with such rage will not fade quietly into the post election sunset. Trump promised as much on Tuesday when he declared, “This will not end well.” It is one promise he seems determined to keep. 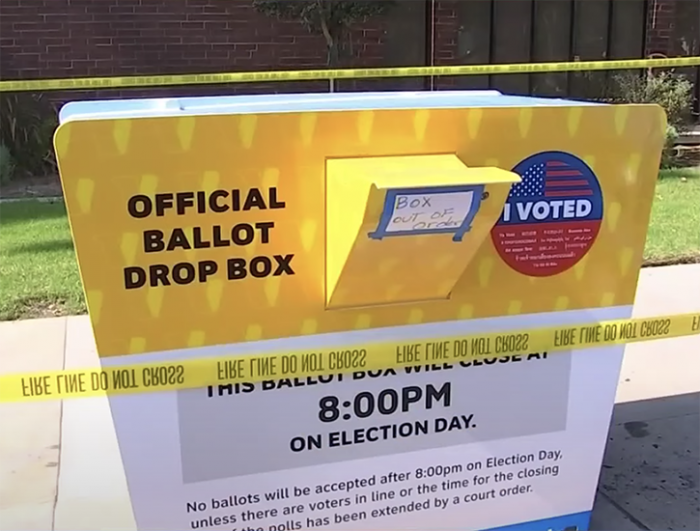 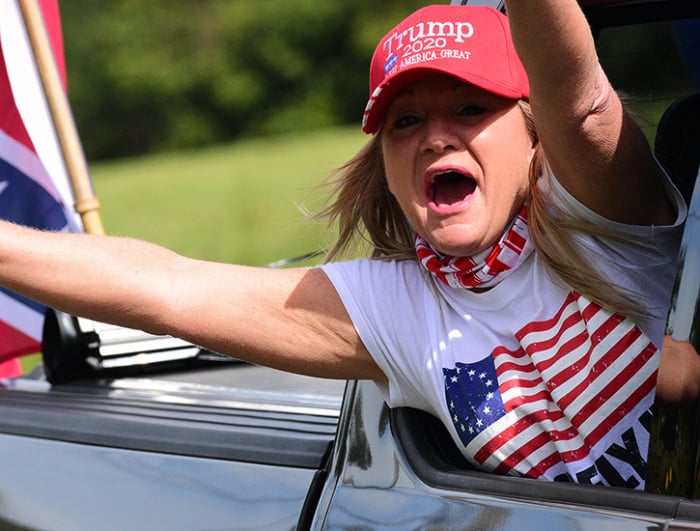