Recently, the New York Times seems to have generously expanded its remit to producing puff pieces on right-wing extremists. One of the less noted, and thus more insidious, recent examples was last month’s regurgitation of the Seasteading Institute’s talking points for its Floating Island Project, a still-nonexistent libertarian floating anti-nation, under the headline “Floating Cities, No Longer Science Fiction, Begin to Take Shape.”

Illustrating the article with a raw rendering might have served as a fairly good indicator that its subject is still very much science fiction, a potent piece of political vaporware. And indeed the Floating Island Project is nothing but a test-run sheltered, both geographically and politically, by French Polynesia, an overseas collectivity of the French Republic, which includes Tahiti. In his 2017 book Seasteading (from an imprint of Simon and Schuster, somehow), Joe Quirk, along with his co-writer Patri Friedman, describes the plan for the seastead, its residents already granted “substantial political autonomy,” to gradually detach from its host nation and achieve complete political independence by 2050.

Quirk is the President of and official “Seavangelist” at the Seasteading Institute, and when interviewed for the Times piece, he argues that the future is a terrifying place of neo-Malthusian food and water shortages, rolling climate change disasters, and various other now-apocalypses. Here, only unconstrained innovation will allow humanity to survive. This is an idea lifted from Peter Thiel, the libertarian PayPal tycoon and Trump sideman who gave over a million bucks to the Institute early on. In his 2014 start-up handbook/deranged manifesto Zero to One, Thiel wrote of the “valuable new technology” needed to reach the future “safely.” (This, in turn, seems swiped from Hayek’s emphasis on the “freedom some person may need in order to do things beneficial to society.”)

In their book, Quirk and Friedman (who is, yes, the grandson of Milton Friedman) introduce us to a series of innovators who will fix the world just as soon as they get off-shore.

Though the word “seasteading” has been around at least since Kenneth Neumeyer’s 1981 self-sufficiency tome Sailing the Farm, Thiel is its honorary figurehead now. The political idea—basically to evade taxes by setting up a nation on international waters—began to crystalize in Wayne Gramlich’s 1998 article “Seasteading: Homesteading on the High Seas.” A decade later, Gramlich’s early hope that one of San Francisco’s many “multi-millionaires will become interested” in the project was realized in Thiel, and the Seasteading Institute was formed. Gramlich’s ideological DNA was integral to the Institute’s creation, although he is no longer listed as a cofounder on the Institute’s “About” page, while Thiel is. Despite this, and the presence of several members of the Thiel Foundation on its Board of Trustees, Thiel himself is not officially involved with the organization, dismissing its short-term potential to Maureen Dowd in 2017. Two years earlier, Thiel told students at George Mason, “I’m not exactly sure that I’m going to succeed in building a libertarian utopia any time soon.” His efforts since have been redirected to burrowing into the White House and initiating auto-cannibalization.

In their book, Quirk and Friedman introduce us to a series of innovators who will fix the world just as soon as they get off-shore. One guarantees production of “a hundred thousand gallons of jet fuel per day with nothing but sea water and solar energy,” another a farm of sea vegetables totaling 180,000 square kilometers which “could provide enough protein for the entire world population.” It’s hard not to see seasteading as part of the long golden chain of American hucksterdom, which Silicon Valley currently has coiled around our collective neck.

The solutionism doesn’t stop there, just witness the book’s subtitle How Floating Nations Will Restore the Environment, Enrich the Poor, Cure the Sick, and Liberate Humanity from Politicians. Quirk tells the Times that seasteading will promote peace because “land incentivizes a violent monopoly to control it”—as if the allocation of land as capital wasn’t the issue. Quirk blithely recommends factory farming kelp, algae, and whale shark, as if somehow being off-shore will mitigate the ecological damage. We need not see to the myriad threatening issues at hand; being off-shore will accomplish this for us! This is the killer-app ethos: technological development will save us from having to change our consumer habits. As with much of Silicon Valley, it’s hard to parse how far Quirk and his compatriots have bought their own con and convinced themselves they can deliver.

Even if seasteading isn’t just a floating pyramid scheme, it has tied itself to a dangerous political aim.

Even if seasteading isn’t just a floating pyramid scheme, it has tied itself to a dangerous political aim: that of “a Cambrian explosion of governments,” each designed around their citizens hallowed right of exit. For seasteaders, entropy only exists within the nation-state, and to achieve the future, we must decouple from an obsolescing political technology. Despite their rhetoric about experimental living (the Times calls Friedman a “freethinker” and points to his college experiences with intentional communities), seasteaders don’t want a revolution, they want to recreate existing social and economic hierarchies in an environment they see as fundamentally more stable. As Corey Robin observes in the second edition of The Reactionary Mind, the essence of reactionary politics is the attempt to reinstate a challenged or vanished hierarchy. (Please see: this reaction the morning after Roy Moore’s defeat.)

The ocean has long been viewed as an escape from political tyranny. Marcus Rediker, a historian at the University of Pittsburgh, has written extensively of “floating proletarians” (i.e., Golden Age pirates) who disrupted “trade in strategic zones of capital accumulation.” They recruited from horrifically abused merchant and naval crews and treated the ocean as a commons, their appropriated vessels as collectively-owned floating factories. Their officers were “allowed no more [food] than another man,” and their captains only had full authority in times of crisis. Rediker sees piracy as a haven from ascendant global capitalism, but as a leveling of hierarchies, not a retrenchment.

The portmanteau “seasteading” itself is meant to conjure up a more appropriate historical comparison. Beginning in 1862, the Homestead Acts enabled settlers, in a sick vertex of Manifest Destiny, to claim 270 million acres of land. Gramlich’s essay directly invokes the settler-mythos, comparing his untested, DIY suggestions to the “Conestoga wagon,” a widely distributed small-scale technology which enabled a swarm of independent agents to accomplish a massive public work. For his part, Quirk writes glowingly of the “Next New World” and frames Columbus as a libertarian. By the end of his seminal essay, however, Gramlich admits that a bootstrap single-acre seastead would “not be suitable” for the high seas, suggesting instead a beta project in a large harbor—which is exactly what is happening now in French Polynesia.

Quirk and Friedman emphasize the guarantee of right of exit to a new floating proletariat, but who will enforce such a contract on the high seas?

If Neumeyer wanted to indulge in his post-hippie desire to “never come back to land” and Gramlich (at least initially) dreamed of a wagon train of the sea, the Seasteading Institute’s tactic of slow detachment of the nation state suggests it wants a high-tech, luxury utopia for millionaire-innovators, whose whims can be seen to by a captive workforce. Instead of the barren platform of the slightly infamous micronation Sealand, the Institute offers us just another shitty Special Economic Zone. Thus, the globalist, corrupt institutions which libertarians despise are utterly necessary for the creation of their successor. (One is reminded of cryptocurrency’s parasitic relationship to existing financial and banking structures.)

Quirk and Friedman emphasize the guarantee of right of exit to a new floating proletariat, but who will enforce such a contract on the high seas? Governments ensure contracts are honored, and the whole idea is to escape those. Quirk loves comparing seasteading to the cruise ship industry, where employees can, at least theoretically, “jump ship” if they are subject to bad working conditions, but this ignores the fact that disembarking often involves visas and passports which workers don’t have and that the industry is rife with abuse. Quirk likes to tell his audience of imaginary prospective seasteaders they’ll be able to “vote with your house,” but you can’t vote with your house if you don’t own one. You work, or you swim.

Brendan C. Byrne’s fiction has appeared in Terraform and Flapperhouse, and his criticism in The Atlantic, Rhizome, and Imperica. 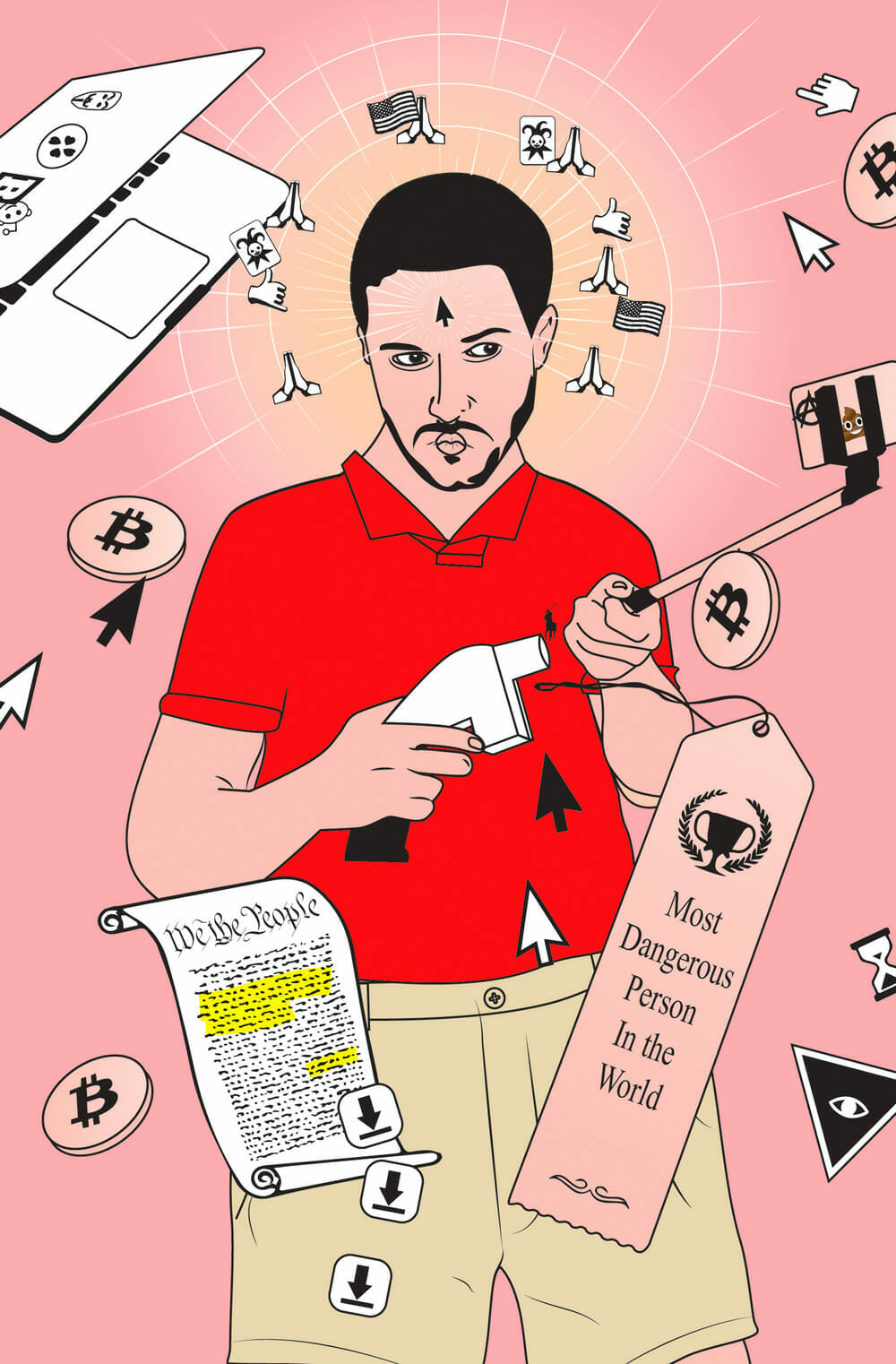 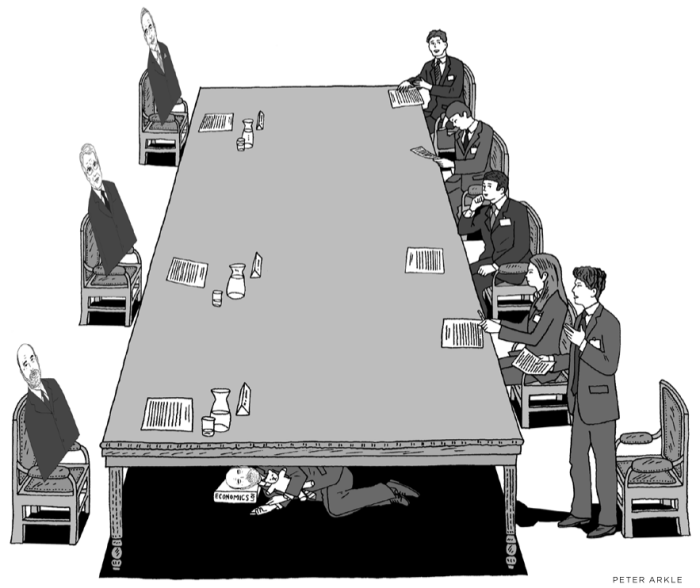 I Was a Teenage Gramlich
Jim Newell
Salvos