The mass funeral pyres continue to burn all over India. After Covid-19 case numbers rocketed upward throughout April, the surge became cataclysmic in the first week of May. Patients were dying at the gates of hospitals, their relatives desperately trying to find them beds and oxygen cylinders. On Tuesday, May 4, the country passed the grim milestone of twenty million cases. The official death count—whose numbers are, by everyone’s admission, vastly underestimated—reached 226,188 people. These were the dead who were counted as having died of Covid despite the informal instructions given to health authorities to classify the deaths as Bimari, the Hindi word for “sickness,” rather than of Covid-19.

The tenor of the central government, led by Prime Minister Narendra Modi, was recalcitrant, never once admitting that the mass election rallies and fervent religious commemorations on the banks of the Ganges played any part at all in India’s grim reality. Their focus remained on “good” news, a request that the country’s television media, which relies on licensing by the Modi government, was glad to follow. In a debate held Wednesday evening on Republic TV, a pro-Modi channel, six doctors from various parts of India were asked to discuss the positive news that cases were below the peak of four hundred thousand per day for the past two days. This, the moderator and most of the doctors insisted, was because the surge was now under control. Only one of them, a Dr. Ishwar Gilada, had the guts to openly state the obvious. He said that case numbers were down because there are no tests left to administer. He reviewed peaking caseloads around the country and suggested the numbers could go higher. “We are in very bad shape,” he said.

Americans sadly are familiar with this deadly numbers game that is the single trick of the nationalist pony. It featured as a central theme of the Trump administration’s handling of Covid, which even as late as July 2020 opposed funds for contract tracing to be included in the second Covid relief package. The president was even more strident about holding back testing. “If we stopped testing right now, we’d have very few cases, if any,” he told reporters at the White House.

The mass rallies, the eschewing of masks, and the creative statistics are not the only bits the Modi administration seems to have copied exactly from the Trump administration’s playbook. Just as Trump persisted with his lethal rallies, the Modi administration, which wants to transform India into a Hindu state, took out full-page advertisements in Indian dailies saying it was safe to participate in the Kumbh Mela, a gathering of millions that involves a dip in the Ganges. So, too, did they ask masses of people to participate in election rallies in the state of West Bengal, a state Modi’s Bharatiya Janata Party ended up losing anyway.

Ever since India plunged into the dark and hapless place it finds itself, the Modi administration has blamed state governments for the spread of Covid. Delhi, which is one of the epicenters of the surge and from where many of the ghastly images of endlessly burning funeral pyres have emerged, is controlled by the Aam Aadmi Party (Common Man Party). The chief minister, Arvind Kejriwal, a foe of Prime Minister Modi, has claimed that the central government is not even providing the city of almost seventeen million with its allotted quota of oxygen, let alone what it actually needs. The heated issue has ended up in the courts, with the Delhi High Court issuing several ultimatums to the central government along with a threat to begin contempt proceedings after May 1. By May 4, the central government still had not complied with Delhi’s requirements; but just as the High Court of Delhi was about to begin contempt proceedings, they were stayed by the Supreme Court of India, filled as it is with judges used to gushing over Prime Minister Modi. As appeasement, the Supreme Court asked the Government to file a “comprehensive plan” for the supply of seven hundred metric tons of oxygen that are Delhi’s daily due. It is just as it was in the United States, where states were left to their own devices to procure what they needed, with the aggravating reality that Indian states, unlike California and New York and Michigan, etc., do not have the monetary resources to pay suppliers up front. Delhi is still starved of oxygen.

The mass rallies, the eschewing of masks, and the creative statistics are not the only bits the Modi administration seems to have exactly copied from the Trump administration’s playbook.

Americans, however, made a key choice in November 2020. In an election that ended up not being close in the popular vote, now-President Biden scored seven million more votes overall and won the Electoral College. Trump, along with his white nationalist agenda, his efforts to delegitimize masking, his constant focus on the narrative of the pandemic rather than on the actual pandemic, was kicked out of power. Even as the American death toll neared half a million, Trump called the numbers vastly exaggerated. The new Biden administration that took power in January had armloads of plans for what has proven to be a smooth mass vaccination program, one that has outpaced most of the rest of the world. One hundred million Americans are now fully vaccinated. Trump’s voter base, particularly his faithful white middle-aged men, remain the demographic that has the lowest numbers, still choosing to adhere to Trumpist propaganda about the virus being a hoax.

Had America chosen differently, its situation could well have been a replication of what is happening in India today. Like the Modi Government, which despite boasting two large vaccine manufacturing plants run by The Serum Institute and Bharat BioTech, had not placed enough orders to vaccinate its population, Trump’s administration would have been a mess of mixed messages and incompetence. As has been widely reported, the Trump administration had no rollout plan for the vaccines, which makes sense only when one recalls that a large percentage of his followers downplayed the threat of the pandemic. A botched rollout would have cost hundreds of thousands of lives, adding to America’s highest-in-the-world death toll. Just as deaths and case numbers are being fudged by a Hindu nationalist in India to suggest an artificial flattening in total case counts, so, too, would it have been in the United States by a white nationalist and nativist Trump administration. Wherever nationalist governments may be, they always choose to control the narrative of the problem rather than to actually solve the problem itself.

The actual problem for India is huge. According to estimates, only 2.2 percent of the current population has been fully vaccinated. India needs 200 to 230 million vaccines a month to vaccinate its 1.5 billion population. Hardly any are available; the much-touted vaccination drive that would make the vaccine available to everyone over eighteen years old lies in disarray. Adar Poonawalla, the CEO of the Serum Institute, has come under fire for undersupply of vaccines and “profiteering” from Covishield, a version of the Oxford AstraZeneca vaccine. (India shipped sixty million doses abroad before the spike in cases.) In response, Poonawalla noted that the Indian government had ordered only 2.1 million doses in February, and then 120 million more in March 2021 when the numbers started to creep upward. He had not increased capacity, he said, because there simply were no orders from the Indian government. Despite scaling up, he noted, the shortage would last until at least July.

The Modi government did not have any plans to vaccinate its population and the only way out of the cycle of endless death wrought by the virus is just that: the vaccine. A million people may die in India because of this and many will not even be counted, cremated in the makeshift parking lot crematoriums that are the only option for many. Trump’s loss has not eliminated the white nationalist and nativist ideology that gives his supporters the sense of self and superiority to which they believe they are entitled. Having engulfed the Republican Party, and unwilling still to believe that Trump lost, they are addicted not to what Trump did as head of the government but rather how he affirmed their sense of white racial superiority.

The massive deaths, the shortages of beds, of oxygen, even of wood to burn the bodies, may still not be the end of Modi. In Trumpian fashion, he gives his supporters, many new entrants to the Indian middle class who dislike being outdone by either Muslims, Christians, or even lower caste Hindus, a sense of primordial Hindu superiority. Even far poorer Hindus can buy into this, as laws like the Citizenship Amendment Act suddenly render their Muslim neighbors non-citizens, leaving their assets up for grabs. Like Trump’s followers, Modi’s Hindu nationalist diehards may be too addicted to the idea of reclaiming Hindu dominance to give him up.

At the end of this, whenever it comes in India, more Modi voters will have lost relatives, fathers, husbands, and sisters than those who did not vote for Modi. Those who are unwilling to let go of their newfound sense of Hindu superiority will still vote for him. Some, however, may be instigated to look at things differently, maybe even as they are. Those Indians, rather than just vaccines, hold the keys to saving India from itself. 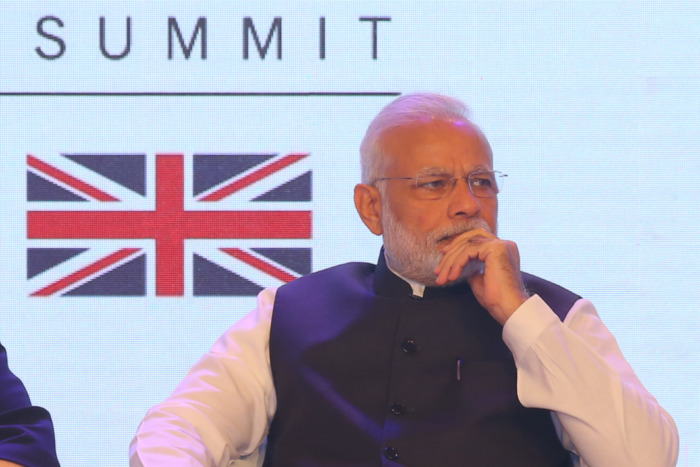