At long last, after kitesurfing with Virgin billionaire Richard Branson and Instagramming his time aboard David Geffen’s yacht in French Polynesia with Oprah Winfrey, Bruce Springsteen, and Tom Hanks, former President Barack Obama has returned from vacation rested and ready to get back to work. After months of seeing Donald Trump attempt to trash his legacy and destroy the modest progressive gains he was able to achieve, liberals were getting restless for him to say something—anything—in response.

“Why are we not hearing from him?” Sarah Kovner, an Upper West Side nonprofit consultant who raised $1 million for Obama’s campaigns, told the New York Times. “Democrats are desperate. Everything that Trump is doing really requires a response.”

But the sense of relief was short lived in the house of neoliberalism. Obama supporters succumbed to a still-smoldering round of internecine squabbling after the news broke that their champion would take a $400,000 check from Wall Street investment firm Cantor Fitzgerald to give a speech on health care this September. This is just one of many lucrative speaking gigs he plans to pursue, over and above the $65 million he and Michelle will receive for their memoirs. All in all, the Obamas can expect to haul in $200 million in the next fifteen years or so.

Vox’s Matt Yglesias led the charge among disenchanted Obama supporters, with an attention-grabbing post under the wildly exaggerated headline “Obama’s $400,000 Wall Street speaking fee will undermine everything he believes in.” Yglesias argued that during this trying period of rising right-wing populism, liberal leaders need to maintain higher standards of personal ethics. Joe Trippi, who made his career working for the former Vermont governor–turned–thoroughly compromised lobbyist Howard Dean, agreed about the optics. “Every president since I’ve been active in politics immediately got whacked for big speechifying,” he told the Times. “I can’t remember it not happening. And they never look good.”

Obama wants to show that the Democratic Party has been, and will continue to be, open for business to all comers.

Daniel Gross led the pro-Obama counterforces with the Slate-pitchiest of Slate hot takes, tut-tutting the “absurd double-standard” and the rampant “misunderstanding of the market forces animating the industries in which Obama now works.” Gross argues, somewhat persuasively, that such buckraking hasn’t hurt liberalism in the past, and concludes, a good deal less persuasively, that it shouldn’t do so now. (The piece ran with a typically Slate-ified, everyone-calm-down sub-head: “If the only thing keeping progressivism afloat is the virtue-signaling of our best leaders, we’re in trouble.” Uh, Earth to Gross: we’re in trouble.) He concludes by arguing that Obama’s accepting the fee was actually redistributive and populist: He would be taking money from the low-tax folks at Cantor Fitzgerald and pay about 40 percent of it in income tax. This speaking gig, in short, was straight out of Robin Hood’s own playbook; it would hurt the poor not to take it!

Both sides of the debate are clearly right about two things: The Obamas don’t need the money; and they don’t seem the type to fall to Clintonesque greed. But the mistake in the hubbub over the Cantor speech is to see the decision as a bug in contemporary Democratic politics, rather than a feature. It may well dismay Yglesias to be reminded of this, but insofar as Obama has made a return to politics, it is not to fight the scourge of Trump-inflected populism. Obama has no intention of violating the rules of the presidential fraternity, in which departing presidents speak no ill of their replacements. Rather, Obama wants to show that the Democratic Party has been, and will continue to be, open for business to all comers. He is, in effect, marking off his version of center-left progressivism in order to stave off, once and for all, an emboldened Sanders-led insurgency from his left.

Lest we forget, Obama’s genius lay in being able to speak credibly to both Wall Street and Main Street. Back in 2006, well before the first Obama presidential campaign, Ken Silverstein wrote the definitive story on the Obama money machine for Harper’s magazine. In 2008, Obama set records for Wall Street donations—a point that Hillary Clinton cited in defense of her own lavishly compensated stint behind a Goldman Sachs-branded podium. Obama did it and he passed super-tough financial regulations all the same—so why not Hillary too? After all, none of his regulatory reforms prevented him from going on to raise a boatload of money from Wall Street in 2012. This, in short, is business as usual as it should be: both lucrative and free of moral censure!

Obama’s winning 2008 message, you may recall, was that there was not a filthy-rich and dirt-poor America, or a corporate multinational and sole-proprietor America, or a full-time-with-benefits and freelance-contract-gig America, but the United States of America. (Anyway, I think that’s how it went.) And he was blessed with the preternatural ability to speak convincingly to both sides. As the son of a Kenyan immigrant with a Muslim middle name raised in a single-mother household and as a South Side Chicago community organizer, he could address the oppressed as a sympathizer. And as the credentialed Ivy Leaguer, former Harvard Law Review editor, and fawning admirer of the Robert Rubin and Lawrence Summers brand of deregulatory Democratic economics, he could rub elbows with elites.

In this light, we shouldn’t look at Obama’s decision to take Cantor Fitzgerald’s check as a risky venture that could alienate certain Democratic constituencies and feed into the anti-establishment populist groundswell. Instead, Obama is positively affirming his ties to Wall Street and corporate interests: Unlike the Sanders left, I am willing to work with you, and so will the Democratic Party, so long as I have sway.

Even when he was luxuriating in sunny beach climes with the global elite, Obama leveraged his considerable post-presidential clout to his former labor secretary Tom Perez put in charge of the Democratic National Committee, successfully smiting the insurgent candidacy of the Sanders-backed, and Sanders-backing, challenger, U.S. Rep. Keith Ellison. What was at stake in that contest became clear on April 18 when Perez and Sanders appeared on MSNBC’s “All In with Chris Hayes” during their “unity tour.” The new DNC chair made it abundantly clear that he wasn’t “feeling the Bern.” While the earnest host tried to goad Perez into agreeing with Sanders that the Democratic Party had to finger the ruling billionaire class and say “your greed is destroying this country,” he refused to take the bait.

Obama centrists don’t have to worry just about Sanders’s popularity. Elizabeth Warren, who is increasingly appearing as a plausible presidential candidate for 2020, has also risen as an economic populist critic of the former president. She has been perfectly willing to challenge Obama by name, saying he was wrong to claim at a commencement address at Rutgers last year that “the system isn’t as rigged as you think.” “No, President Obama, the system is as rigged as we think,” she writes in her new book This Fight Is Our Fight. “In fact, it’s worse than most Americans realize.” She even went so far as to say she was “troubled” by Obama’s willingness to take his six-figure speaking fee from Wall Street. There is indeed a fight brewing, but it’s not Obama v. Trump; it’s Obama v. Warren-Sanders.

And this is where the real difficulty lies for the Democrats. The trouble with the popular and eminently reasonable Sanders-Warren platform—reasonable for all those, Obama and Clinton included, who express dismay over our country’s rampaging levels of Gilded Age-style inequality—is that it alienates the donor class that butters the DNC’s bread. With Clinton’s downfall, and with the popularity of economic populism rising in left circles, Obama has to step in and reassert his more centrist brand of Democratic politics. And what better way to do so than by conspicuously cashing a check from those who would fund said politics?

Obama’s return to the spotlight sought a more noble purpose: He was launching his work at the Obama Foundation. This enterprise would be dedicated to, among other goals, “training and elevating a new generation of political leaders in America,” according to Obama’s post-presidency senior adviser Eric Schultz. Here, too, we do well to note just what leaders are likely to prosper under Obama’s guidance, and which ones will be denied backstage lanyards at his foundation conclaves. It takes no great leap of the imagination to surmise that Obama is keen to see his party led away from the left insurgency brewing among the Democrats’ millennial constituency.

Obama hagiographers would inform you that his campaign was noteworthy for its facility with young voters and activists, thanks to his innovative use of online mobilizing and his Kennedy-esque charisma. But lost in these sunny encomiums is the rise of anti-establishment youth activism that flowered under his presidency. One could trace the alternate saga of the Obama presidency in a three-act tragedy of millennial activist outrage: Occupy Wall Street, Black Lives Matter, and Feel the Bern.

This tension was always there during the Obama presidency for those paying attention. Consider this 2015 AP article about Obama’s determination to answer the frustrations of BLM activists by making inequality the focus of his post-presidential foundation. He announced his intentions at a speech at Lehman College in the Bronx and during an appearance on the Late Show with David Letterman. “We’re going to invest in you before you have problems with the police, before there’s the kind of crisis we see in Baltimore,” he assured aggrieved communities of color from the unlikely platform of the Ed Sullivan Theater. He also brought his inequality gospel to Manhattan’s big-money donors, as the AP noted in an unusually arch dispatch:

He tied the call to justice with an economic message for the sixty donors who paid $10,000 to see him at an expansive, art-filled Upper East Side apartment—including actor Wendell Pierce, who played a Baltimore police detective working in drug-ridden projects on The Wire. . . . Obama later held a discussion with about thirty donors contributing up to $33,400. That event was closed to the media.

In this light, Obama’s outreach to young leaders and activists isn’t much of legacy-burnishing of President Hope-and-Change. Instead, it looks distinctly like a counterinsurgency effort to mobilize more moderate forces among millennial Democrats and tame their alleged potential to spin out of control. How do we clone more market-friendly activists like Deray Mckesson and quarantine the pro-Bernie DSA youth and their bloom of red-rosed Twitter accounts? Obama hopes Silicon Valley can help figure this out. Indeed, he’s so committed to achieving this goal that he’s willing to become a venture capitalist to do so. 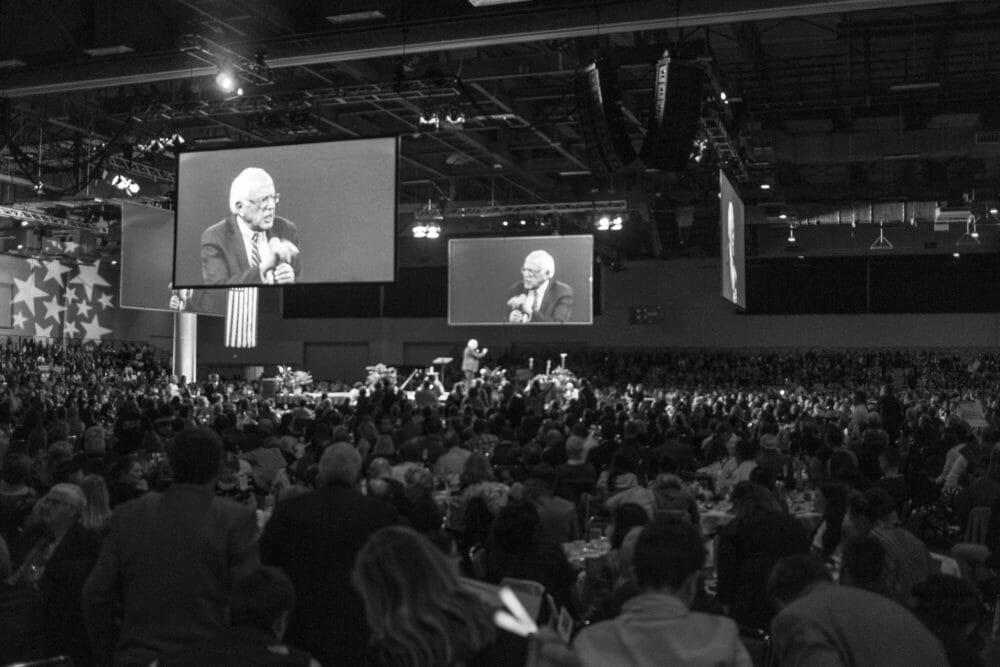 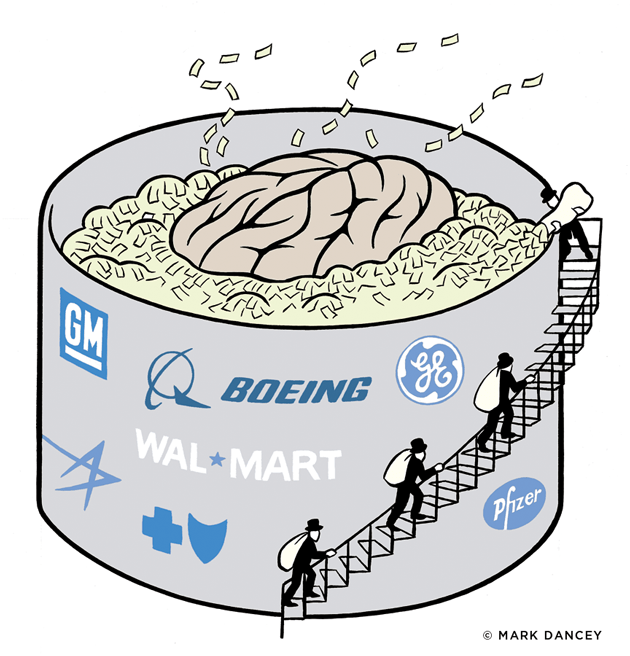 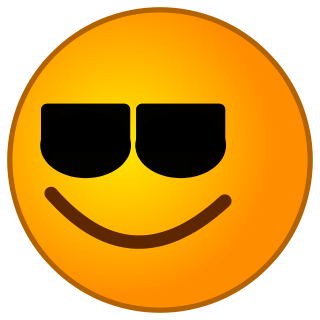