Earlier this summer, President Obama told Bloomberg Businessweek that he was eyeing Silicon Valley for his post-presidential life: he wanted to become a venture capitalist. And as the summer wound down into Labor Day weekend, his efforts to transform his lame-duck term into a unicorn—to borrow the argot of Valley venture capitalist gurus—began in earnest. On September 1, White House Chief Digital Officer Jason Goldman (formerly of Blogger, Google, and Twitter) announced South by South Lawn (SXSL), a festival of arts, ideas and action patterned after Austin’s South by Southwest (SXSW), where Obama took part in a keynote conversation this year. On October 3, “creators, innovators, and organizers” will convene on the grounds of the annual Easter Egg Roll for an evening of music, film and ideas to honor the country’s leading “change makers.” Nominees were asked to provide their Instagram accounts as badge of change-making honor. Can a Snapchat summit be far behind?

But the pieces de resistance in Obama’s late-career makeover came the day before Goldman’s news: Wired magazine announced that Obama would follow the path of other great Condé Nast guest editors such as Bono (Vanity Fair), Bill Gates (Wired), and Ashton Kutcher (Details) to oversee a special November issue on “Frontiers”—which, as every reader of historian Frederick Jackson Turner will tell you, is synonymous with American democracy. “We want to wrestle with the idea of how today’s technology can influence political leadership,” Wired editor in chief Scott Dadich said. “And who better to help us explore these ideas than President Obama?”

And where would any Wired-sponsored foray into public life be without a major co-branding initiative? The White House will co-host with engineering powerhouses Carnegie Mellon University and the University of Pittsburgh an associated White House Frontiers Conference devoted to way-new policy innovations such as “building smart inclusive communities, including through investment in open data and the Internet of things.” And in case the purpose of the effort were lost on the participants, Obama linked to his recently compiled listicle of the 100 ways he crushed it in science and innovation.

Future historians will surely remember Obama as not only the first African-American president but also the first Innovator-in-Chief.

Given the eagerness that the leader of the free world has shown to nail down his own digiterati cred, you have to credit the marketing savvy behind Wired’s stunt-editing assignment. Indeed, Dadich’s instincts are probably even more spot on than he realized. Future historians will surely remember Obama as not only the first African-American president but also the first Innovator-in-Chief, the Lincoln of our new politics of “transformational change.” And as he’s plunged fearlessly into this new tech frontier, he’s limned a new civic dispensation in which qualitative political shifts are virtual—meaning both digital, and only make-believe—and the underlying substratum is the same old domination of Big Money. Before Obama, we had influencers from Wall Street and K Street; after him, we will also have LinkedInfluencers from Sand Hill Road.

What are the bona fides of our “First Tech President,” as the White House has apostrophized its nimble, change-making CEO? Let the blog post that saw him off to spring’s SXSW explain:

Obama dilated on this digitally enabled civic dream as he spelled out the “imperative of citizenship” during a speech in Selma, Alabama, last year marking the fiftieth anniversary of Bloody Sunday, when police brutally assaulted civil rights marchers seeking to cross the Edmund Pettus Bridge. A government of “We the People,” the president explained, requires that the public be given a voice so that they can participate in their democracy and drive change. And that, naturally, is where Silicon Valley comes in:

Technology has the power to enhance this work. When it puts users first, it enables Americans to find their voice, for our government to deliver better services, and make our country more just. The chance to be part of this work—to build a more user-centered government—has inspired talented people to serve our country in new ways.

In other words, Obama is the first president to realize that the preamble of our Constitution demands a more perfect user-interface (UI) experience, which requires add-ons like civic-engagement platforms, product management, and coding-as-public-service.

Ironically, our tech president’s vision of tech-enabled citizenship has sprung largely from conditions of tech disaster. One might have thought that the first social media president, whose mastery of online engagement became the major story of the 2008 Democratic primary and presidential election, would have been an earlier adopter of Progressive Era 2.0. But, as Obama notes, there were those minor distractions during his first term, such as a cratering economy and unresolved messes in Iraq and Afghanistan. No, it took the disastrous 2013 Healthcare.gov rollout that nearly killed Obamacare, his signature achievement, in the crib for him to become the First Tech President. The government contracted out the back-end functionalities of the health-care registration website at a cost of $1.7 billion (more than 1,700 percent over the original budget of $93.7 million), only to see it suffer disastrous glitches that prevented many Americans desperate for a health care plan from signing up. Obama called his contacts in Silicon Valley to assemble an emergency SWAT team of engineers to save the day. By the president’s account, they performed brilliantly, well beyond his wildest expectations.

Ironically, our tech president’s vision of tech-enabled citizenship has sprung largely from conditions of tech disaster.

And this eleventh-hour success story inspired Obama to wonder of other ways he could leverage his tech ties. “How do we deliver services better to customers?” he asked. Why not a start up? The president launched the U.S. Digital Service, a crack team of 151 engineers and designers recruited to Washington to help upgrade web technology across the federal government, from Veterans Affairs to student loan applications to immigration.

All right then–why not an innovation fellowship program? A tech contracting and consulting arm of the federal government? Why not a SXSL, a Maker Faire, and a “Champions of Change” award for those helping to “win the future” by “out-educating, out-innovating, and out-building our competitors in the 21st century”? Indeed, why not, as the president suggested in a Fast Company interview, rethink the fundamental relationship between technology and policy: instead of making the policy shape the technology, why not seize opportunities to have the technology help shape the policy?

Why not dream big? Why not become the first ex-President to become a VC (sorry, Al Gore), who can seed a long series of start up projects creating “change we can believe in”? Why not establish a permanent hyperloop between the Beltway and the San Francisco peninsula? As innovation journalist Jon Gertner wrote about Obama’s “stealth startup”:

The point for Obama is not to sell these candidates on a career in government, but rather to enlist them in a stint of a year or two at USDS, or even a few months. For decades, accomplished lawyers and economists have worked in the capital between private-sector jobs, so why not technologists? “What I think this does,” says Megan Smith, the current U.S. chief technology officer, who spent much of her career at Google, “is really provide a third option. In addition to joining a friend’s startup or a big company, there’s now Washington.”

Thus opens the new revolving door for our new Establishment.

Meanwhile, the specter of Obama spending his post-presidency in the Valley functions as a handy sort of Rorschach test on one’s views of Obama as the president of hope and change—to say nothing of Silicon Valley’s assiduously tended image as the premier industry of hope and change. Let the cheerleaders for both make their cases. As for me, I see the ink blot as exactly the sort of uncontroversial low-hanging fruit and non-partisan technocratic fix—accompanied, of course, by soaring speeches, buzzy slogans, and captivating visuals of revolutionary foment—that characterizes his presidency.

As for technological progress, don’t get me wrong. Whether it be the steam engine, the telephone, or the Internet, new technologies open up new potentials for our democracy that can be leveraged for social betterment, at least for that short interregnum before they are seized by monopolists to boost their power and influence. And, yes, I am as pleased as anyone by ease of use online, whether it be shopping for books or figuring out how to create a college investment fund for my kindergartner to reduce her future debt burden. But as the heady optimism of the Obama presidency sets out for the western tech frontier, it’s worth asking some questions about how far his tech efforts have advanced our more perfect union:

Is putting information on an easy-to-navigate website the same as transparency?

Is creating a platform for online petitions the same as listening to the people?

Is responding to Twitter queries using the @ function the same as responsiveness?

Is seamless interface with our online government portals the same as self-government?

Is high engagement for an online hashtag campaign the same as social change?

Could King George have avoided the American Revolution by providing better UX to the colonies?

If you answered any of these questions with a yes, I recommend you order Baffler contributing editor Evgeny Morozov’s book To Save Everything, Click Here via Amazon Prime. (Oh, and use code FORWARD—speaking of frontiers—for 20 percent off.) 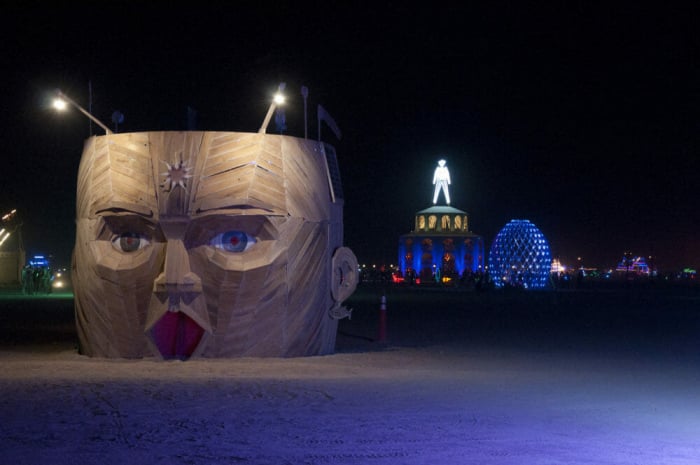 This Could Revolutionize That
Kieran Dahl
Word Factory