How does a decades-old plutocratic convergence of power look to the hometown paper of America’s public-sector ruling class? Why, like a puckish plotline in a high-living thirties comedy of manners, or as fodder for a campy sci-fi horror punchline, that’s how!

Here, for your delectation, is Washington Post Style features scribe Dan Zak, ceremoniously trotting out one labored popcult analogy after another to account for the long-running stranglehold of Goldman Sachs financial titans over the making of federal financial policy: “Why does this white-shoe investment firm always turn up, a tuxedoed stowaway, in the White House?” And again: “An alien race could invade Earth, create an economy based on quasars and dark matter, and our new six-eyed overlord would still hire someone from Goldman Sachs.”

Hardy fucking har. It’s true that, in more capable narrative hands, the notion of the American overclass as a predatory cohort of extraterrestrials has a certain grim explanatory power. It’s also true that it’s simple enough to provide a clear and direct reply to Zak’s initial coy rhetorical question: Goldman Sachs turns up in the upper economic policy reaches of White House after White House because America has ossified into a moneyed oligarchy—a process that has lately found its logical culmination in the elevation of a completely inexperienced tax-avoidant plutocrat to the seat of maximum executive power.

But what kind of insiderish Style-section revelry can be minted from such bleak reflections? No, let us adjourn with Mr. Zak to a litany of taste-markers and a vision of the magical multiplication of pelf. The very name Goldman Sachs, he writes, “feels like the bob of a yacht in Biarritz and tastes like the marbling of a Wagyu steak. It sounds like money being moved, invested, tripled, then moved again to avoid taxes, bubbles and crashes. Its headquarters on Lower Manhattan’s West Street smells like wealth, from the handsomely kitted-out coffee station on the 11th floor down to the $5 million 1800-square foot painting commissioned for its lobby.”

Goldman Sachs turns up in the upper economic policy reaches of White House after White House because America has ossified into a moneyed oligarchy.

Of course, in the immediate aftermath of the 2008 economic cataclysm, other less bling-bedazzled chroniclers of Goldman clout took a somewhat dimmer view of the investment bank’s name-brand magic. Indeed, as Rolling Stone’s Matt Taibbi famously noted, the Goldman business model wasn’t to strategically move wealth out of an asset bubble’s path; it was, rather, to manufacture asset bubbles, and then cynically profiteer on their inevitable collapse. The classic case in point was the bank’s justly infamous Abacus fund, which sold the overleveraged housing bubble of the early aughts short, even as other Goldman fund managers continued to egg clients on to ever greater feats of toxic-derivative swallowing. (It should be noted as well that Taibbi had a much defter command of Goldman-themed metaphor, likening the operation not to the hero in a Lubitsch film but to a “great vampire squid wrapped around the face of humanity, relentlessly jamming its blood funnel into anything that smells like money.”)

But rather than display a cursory grasp of how Goldman works to distribute investment returns remorselessly upward, Zak thumbs through the long, long litany of Goldman-trained White House economy officials as though they are cherished baseball cards. He quotes a similarly long roster of recent Goldman histories and memoirs, mainly to underline the point that the geniuses atop the Wall Street food chain work very, very hard. The Goldman brand bespeaks, he marvels,

a culture of backbreaking work and breathtaking exclusivity, to which Goldman recruits are exposed as soon as they walk in the door. ‘Those candidates who do not evince a scorching ambition, total commitment, and an inclination for teamwork are quickly weeded out,” wrote former trader Lisa Endlich in her book Goldman Sachs: The Culture of Success.

Ouch—I can feel my back breaking already! To be sure, Zak notes, Goldman took some hits during the recently lapsed presidential campaign. Bernie Sanders and Donald Trump—now forever yoked as symbols of alternate-current populist revolt in the mind of every lazy D.C. journalist—inveighed against Goldman’s outsized role in White House and Wall Street circles alike. But in the reassuring arm’s-length patter of the WaPo Style stylist, this become a big old shrug emoticon: “Goldman’s omnipresence inspires anxiety in both regulators and conspiracy theorists. It makes it easy to imagine the type of rigged system that both Bernie Sanders and Donald Trump campaigned against.”

Pause a moment to savor the self-distancing therapeutic rhetoric here. It’s not that Goldman’s dismal track record and pillaging of the American political economy have provoked civic alarm, or reform measures such as the Dodd-Frank Act. No, the firm’s “omnipresence”—a simple fact of its being, along the lines of that kitted-out coffee bar or marbled steak—“inspires anxiety,” sometimes in regulators, but also in “conspiracy theorists.”

Boom! So much for holding the Goldman team publicly accountable for its crimes. Conspiracy theorists believe this shit, people! The firm’s drift into oligarchy is mainly regrettable because it prompts these poor deluded souls to “imagine” that the American system of money and power is—horrors!—“rigged.”

Rest assured, furrow-browed Post reader. All is well in this, the best of all possible policy-vetting worlds.

Besides—and this is the ostensible point of Zak’s mooning tribute to all things Goldman—Donald Trump has already recruited his own retinue of Goldman-trained consiglieres, from White House adviser Stephen Bannon to Treasury Secretary Steven Mnuchin to recently named National Economic Council head Gary Cohn. So rest assured, furrow-browed Post readers wondering Must I sign on to this hallucinatory conspiracy theory?, all is well in this, the best of all possible policy-vetting worlds. Goldman’s “occasionally dodgy reputation among the public . . . is outweighed by the deference it commands in circles of power. ‘That’s why Trump is going to these Goldman people,’ [William D.] Cohan [yet another historian of the bank and the Goldman way] says. ‘Because it’s so easy to claim instant financial respectability by tapping into the Goldman network.’”

Indeed, back in the thirties it was a Goldman executive, Sidney Weinberg, who persuaded Franklin Roosevelt to found the private sector’s own policy-making powerhouse, the Business Advisory Council. That body continues to court executive favor today; now includes present Goldman CEO Lloyd Blankfein, and newly designated Secretary of State nominee, Exxon-Mobil CEO Rex Tillerson. Oh, and there’s also this, Zak explains between discreetly placed parentheses: “(The council’s outgoing chairman is Jeffrey P. Bezos, the founder of Amazon and owner of the Washington Post.)” In other words: One outgoing titan of business-friendly executive-branch lobbying has opened the pages of his vanity journalism outlet to hymn the professional affiliation of his cross-town colleague in nest-feathering. Why it’s almost as if there were a permanent government quartered in Washington, and the system is ri . . . Oh wait, what’s that I hear? Why it’s the gentle bobbing of a Biarritz yacht! 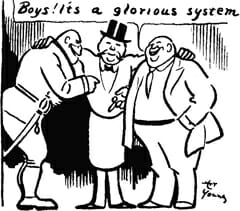 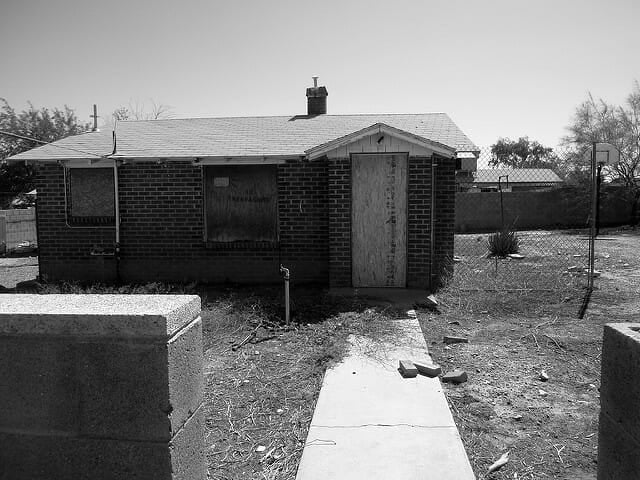 The Calm Before the Crash
Whitney Curry Wimbish
Word Factory