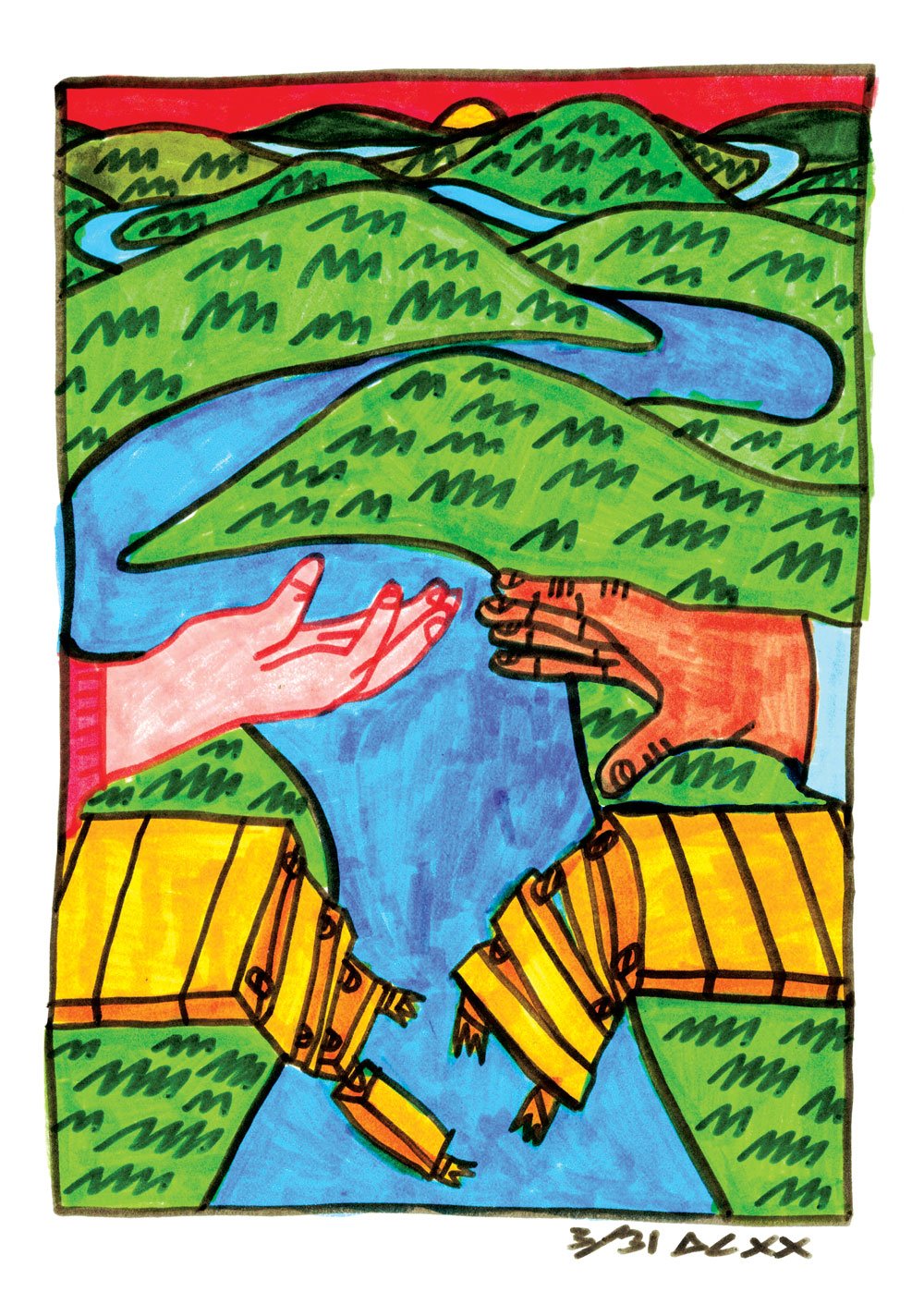 It will become clear that every epoch has the epidemic it deserves.
—Karl Kraus, The Last Days of Mankind

The world under Covid-19 appears to us a welter of conflicting mandates. First, stay inside. Second, go back to work—but not yet. That looming injunction is an admission on the part of heads of state and financial experts that global capitalism is like an animal that suffocates when it fails to move. Meanwhile, human beings everywhere suffocate without ventilators, especially the poor and elderly and sick. Not metaphorically.

More disagreement. The president imparts dangerous misinformation in a press conference, flanked by high-ranking members of the medical community, who in turn contradict him after he contradicts himself. We see the professional class subservient to its supposed enemy. We see cosmopolitan ethics give way to the moral calculus of risk and density, of hospital workers forced to choose who dies first. One correct moral decision, at this point, would be for our national doctors to eliminate the threat of the president and his administration the next time they appear together on live television. Instead we’re treated to a fabricated intraparty debate about whether such press conferences should be shown at all, and we’re reminded that the ratings are too good to ignore. The journalists still show up, though in fewer numbers. Sometimes they ask the right questions.

The bankers, who have always had porous, inexact minds, offer opposed models and projections, too. The chief U.S. equity strategist at Morgan Stanley argues for the return to a bull market. “The virus,” he says, “has already created the recovery through the stimulus.” But the global equity strategist at JPMorgan disagrees. “My concern is this relief rally might not be sustainable,” he says. One could be forgiven for questioning whether the market is protected by an invisible failsafe when its future depends on which analyst lies most persuasively.

The virus and its stimulus have only made plainer what has been true for decades: the supply chain delivers oxygen to the global economy, and it must be handled delicately and protected violently, at specific costs.

Who is the Covid-19 patient? And do these analysts disagree? A closer look at their language says otherwise. The virus, one writes, “has created the recovery.” The final word here refers not to the recovery of a single human life, or even the recovery of a population, but the recovery of the system that failed to protect those lives and populations in the first place. “This relief rally might not be sustainable.” Here, again, the language of health is perverted, retrofitted like old medical equipment to do its new and essential labor. “Relief,” in a better world, would be associated with the end of suffering, and “sustainability” would mean the support needed to uphold and even nourish life. In this case it describes the new energy of the markets after the jolt of yet another unequal stimulus.

But the virus and its stimulus have only made plainer what has been true for decades: the supply chain delivers oxygen to the global economy, and it must be handled delicately and protected violently, at specific costs. Why the rage over migrants before, and now during, the pandemic? The movement of migrant labor is a potential threat to the flow of goods and capital; they are thought to collapse the lung of the economy. Others will have to be fed to the networked god rather than merely eliminated. The day is coming when many will choose, out of necessity or quarantine fatigue, to go back to work. But there is no plan. If we don’t subject the sick and the old to the circulation of the virus caused by the circulation of healthy working bodies, the economy will collapse and more will die. That’s the single mandate masked by the other, conflicting mandates: let them die.

Thus the logic of the global supply chain is Hiroshima logic, Nazi logic. It requires us to shrug off the reality that governance over many decades has allowed states to bypass or destroy institutions and social groups in favor of individuals, who are remarkable for being weak, isolated, and, by definition, alone. This, by design, makes us afraid, and our fear now in social isolation, the alienation and frustration that comes from being unable to touch someone or care for them, is an accelerated version of the selfsame alienation so often written about in modern life. The same man wrote The Stranger and The Plague.

The irony of this arrangement is that individuals, without social groups or institutions to rely on, must look back to the state—good luck out there. The discomfiting notion that the value of your life has been registered in a small government stimulus check is, oppositely, the animating notion of the financial elite. Lives become numbers. Even Bill Gates, lonesome friend of science, speaks this language when discussing Covid-19. On a recent Financial Times podcast, he calmly explained that “anything that cuts a month off the time that we vaccinate is worth literally, uh, hundreds of billions if not trillions.” He’s talking dollars, not lives. But as a one-man block-grant dispenser, a state unto himself, he demands our attention. He told us to be afraid.

Our fear now in social isolation, the alienation and frustration that comes from being unable to touch someone or care for them, is an accelerated version of the selfsame alienation so often written about in modern life.

I think that Bernie Sanders, who’s just dropped out of the presidential primary as I write this, was tired of this fear. He represented the opposite thinking. He wanted to strengthen institutions and rebuild social groups. His aim was to sustain and relieve, not the supply chain but shared lives, so that the state would be forced to negotiate against greater power. And the Democratic party turned again and again to the supply chain, to the outward and upward flow of capital and resources, to eliminate him. Another worker fed to Moloch.

In a failed state, nothing good can last. But then I remember the buzzer at the door I heard two days ago, which brought with it a care package from my brother: masks, gloves, food. And a dear friend who dropped off groceries and medication outside my door and sat talking to me for a while. And the staff of this magazine. They conceived of this issue, about systems of care, before the virus took hold in the United States. They made the magazine in isolation despite the collapse of everything around them, rejecting the lesser mandates of a distributive system that was promised to be the most efficient and cost-effective in human history. One of our writers in this issue finished a long essay while sick with Covid-19.

I never believed in Hölderlin’s “saving power,” the restorative thing that grows from the gravest danger. I’ve changed my mind. This power isn’t an inevitable process or a guarantee, it’s just other people who care. It’s the power that remains when the quarantine ends and the conflicting mandates cancel each other out.