An Appeal From The Baffler 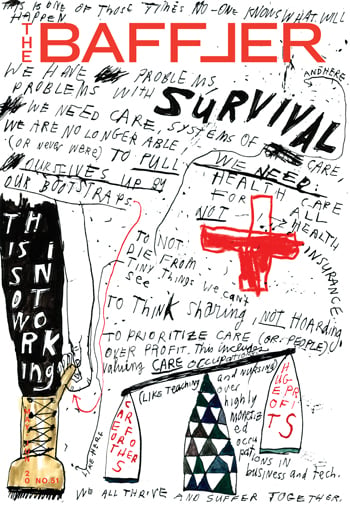 An Appeal From The Baffler

Asking for money is not a natural thing for The Baffler to do, but we do it out of necessity. We’re a magazine of ideas and, regrettably, in actually existing capitalism ideas flow in canals carved by money. But this year it is especially tough. All of us at The Baffler know that many of our readers are suffering as a result of the pandemic that has been allowed to burn out of control and the economic calamity created by the inaction of our leaders.

But if you do have money to spare, please consider donating to our magazine. The Baffler’s willingness and ability to take on the systems that govern our world and turn what could be widely shared prosperity into a battle royale for individual survival is more necessary than ever. In our April issue, The Saving Power, our editor in chief Jonathon Sturgeon wrote of our staff that

They conceived of this issue, about systems of care, before the virus took hold in the United States. They made the magazine in isolation despite the collapse of everything around them, rejecting the lesser mandates of a distributive system that was promised to be the most efficient and cost-effective in human history. One of our writers in this issue finished a long essay while sick with Covid-19.

I never believed in Hölderlin’s “saving power,” the restorative thing that grows from the gravest danger. I’ve changed my mind. This power isn’t an inevitable process or a guarantee, it’s just other people who care. It’s the power that remains when the quarantine ends and the conflicting mandates cancel each other out.

The Baffler’s single biggest expense is compensation, paying the staff and writers fairly to produce the writing and art that comes out of this shared commitment to a better world. We need money for that: to produce articles like David Roth’s somehow hilarious dissections of the people the money god Moloch has installed to rule over us, Ajay Singh Chaudhary’s anatomy of the fictions of #unity that meant to blind us to the growing cancer of climate injustice, Kate Wagner’s poignant essay on the architectural delusions that comfort us amidst our collective slide into oblivion, Barbara Ehrenreich’s exploration of what cave paintings tell us of human society before our collective descent into narcissism, and so much more.

If you can join me in donating, I thank you from the bottom of my heart. If you can’t, I still thank you. Whether or not you are able to make a donation, I ask that you stay angry.

Most sincerely yours,
Noah McCormack
Publisher of The Baffler

P.S. We’re a nonprofit mission, so your donation is entirely tax deductible. Donate today and help us meet the coming year with the wit, tenacity, and full-throated opposition it deserves.

Charitable as a Church