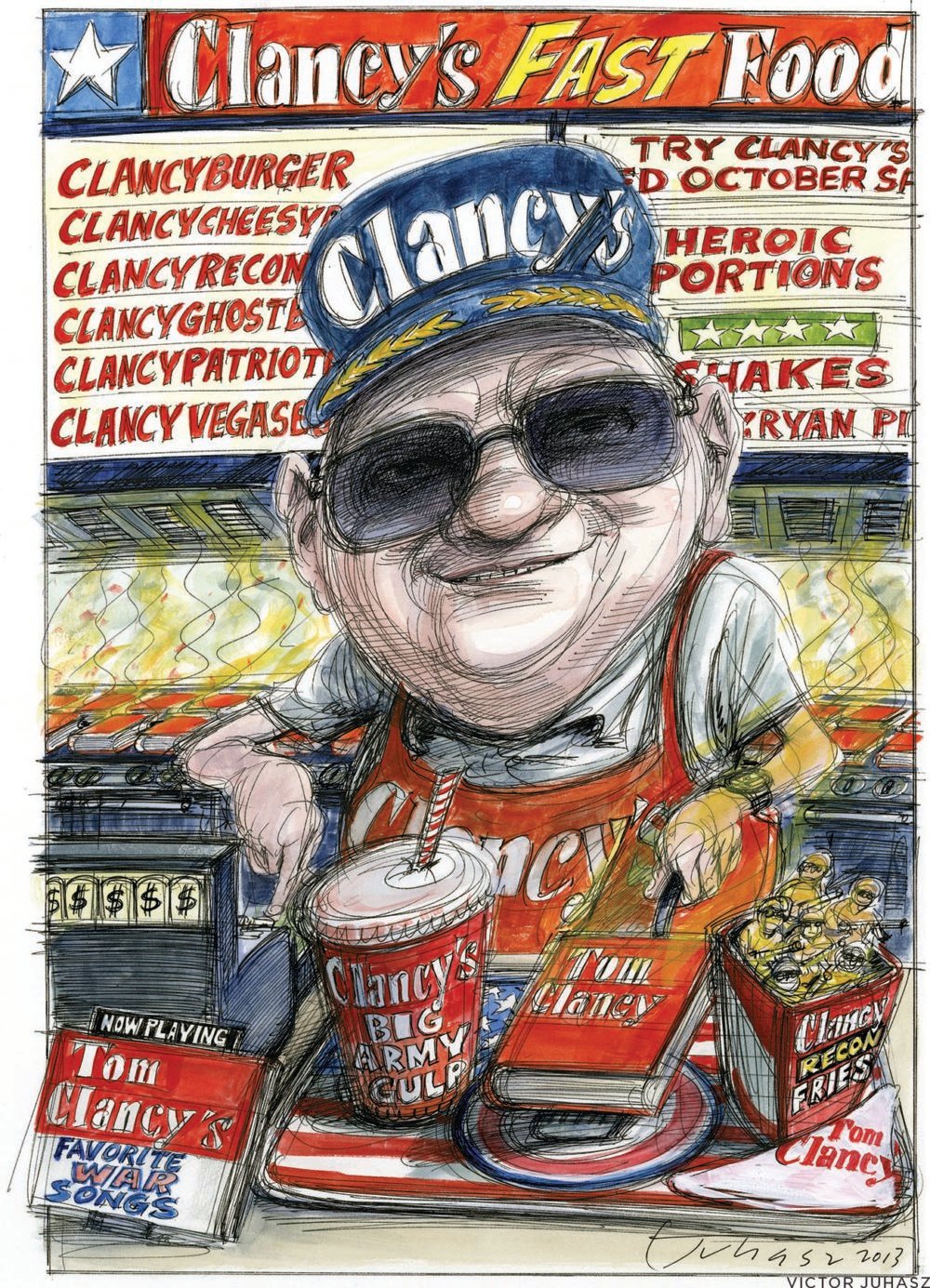 Word of Tom Clancy’s passing in October reached me at a local gym. Peddling away on an elliptical trainer, I welcomed the distraction of this “breaking news” story as it swept across a bank of video monitors suspended above the cardio machines. On cable networks and local stations, anchors were soon competing with one another to help viewers grasp the story’s significance. Winning the competition (and perhaps an audition with Fox News) was the young newsreader who solemnly announced that “one of America’s greatest writers” had just died at the relatively early age of sixty-six.

Of course, Tom Clancy qualifies as a great writer in the same sense that Texas senator Ted Cruz qualifies as a great orator. Both satisfy a quantitative definition of eminence. Although political historians are unlikely to rank Cruz alongside Clay, Calhoun, and Webster, his recent twenty-one-hour-long denunciation of Obamacare, delivered before a near-empty Senate chamber, demonstrated a capacity for narcissistic logorrhea rare even by Washington standards.

So too with Clancy. Up in the literary Great Beyond, Faulkner and Hemingway won’t be inviting him for drinks. Yet, as with Ted Cruz, once Clancy got going there was no shutting him up. Following a slow start, the works of fiction and nonfiction that he wrote, cowrote, or attached his moniker to numbered in the dozens. Some seventeen Clancy novels made it to the top of the New York Times bestseller list, starting with his breakthrough thriller The Hunt for Red October. A slew of titles written by others appeared with his imprimatur. Thus, for example, Tom Clancy’s Ghost Recon: Choke Point or Tom Clancy’s Splinter Cell: Blacklist Aftermath.

Similarly, on those occasions when Clancy partnered with some retired U.S. four-star to craft the officer’s memoirs, the result was a tome “by” Tom Clancy “with” General So-and-So, the difference in font size signaling who was the bigger cheese. And then there is Tom Clancy’s Military Reference series, another product line in the realm of fictive nonfiction. Each title—Fighter Wing, for example, or Armored Cav—promises a Clancy-led “guided tour” of what really goes on in the elite corners of the United States military.

Clancy did for military pop-lit what Starbucks did for the preparation of caffeinated beverages: he launched a sprawling, massively profitable industrial enterprise that simultaneously serves and cultivates an insatiable customer base. Whether the item consumed provides much in terms of nourishment is utterly beside the point. That it tastes yummy going down more than suffices to keep customers coming back.

If Clancy was a hack, as he surely was, he was a hack who possessed a remarkable talent for delivering what his fans craved. Nor did the Tom Clancy brand confine itself to the written word. His oeuvre has provided ideal fodder for Hollywood too. Movie adaptations chronicling the exploits of Jack Ryan, Clancy’s principal protagonist, and starring the likes of Harrison Ford, Alec Baldwin, and Ben Affleck, became blockbuster hits. Then there are the testosterone-laced videogames, carrying titles like Tom Clancy’s Ghost Recon: Future Soldier and Tom Clancy’s Rainbow Six: Vegas 2.

Become one of America’s bravest in this game developed in conjunction with the U.S. Army. See what it’s like to live life as an infantryman. Take on the role of a Rifleman, Grenadier, Automatic Rifleman, or Sniper. Develop skills including Valor, Marksmanship, Stealth, and more.

Here profit and propaganda blend into a seamless package.

Did I mention Clancy-themed board games, music CDs, toys, and apparel? There is even a Clancy line of pseudo-military collectibles. Among the items available for purchase is the Ghost Recon “Future Soldier”—your choice: statuette or stuffed toy.

Don’t expect Clancy’s departure to stem this tsunami of stuff. Although the founder himself may have left the scene, Clancy Inc. gives every indication of carrying on. A new Clancy novel called Command Authority arrived in December. And a new Jack Ryan movie, this one not based on previously published material, is in the works.

Yet to argue that Clancy’s books and ancillary byproducts offer little in terms of lasting value is not to say that they have lacked influence. Indeed, just the reverse is true. As a shaper of the zeitgeist, Tom Clancy may well rate as one of the most influential creative entrepreneurs of the last several decades.

In whatever medium, Clancy’s abiding theme is the never-ending struggle between good guys and bad guys. His bad guys tend to be irredeemably bad. His good guys are invariably very, very good—Americans devoted to the cause of keeping their countrymen safe and the world free. As good guys, they subscribe to old-fashioned virtues while making skillful use of the latest technology. Whether garbed in battledress or trenchcoats, they are cool, professional, dedicated, resourceful, and exceedingly competent. These are, of course, the very qualities that Americans today ascribe to those who actually serve in uniform or who inhabit the “black world,” whether as CIA agents or members of highly specialized units such as Delta Force or SEAL Team Six.

What’s worth recalling is that the prevailing view of America’s warriors was not always so favorable. In the wake of Vietnam, shortly before Clancy burst onto the scene, the books that sold and the scripts attracting Hollywood’s attention told a different story. Those inhabiting positions of responsibility in the United States military were either venal careerists or bunglers out of their depth. Those on the front lines were victims or saps. When it came to military-themed accessories, the preferred logo was FTA.

Clancy was among the first to intuit that the antimilitary mood spawned by Vietnam represented an opportunity. The legions who did not find Catch-22 particularly amusing, who were more annoyed than entertained by M*A*S*H, and who classified Jane Fonda as a traitor were hungry to find someone to validate their views—someone who still believed in the red, white, and blue and who still admired those fighting to defend it. Clancy offered himself as that someone.

To be more accurate, Ronald Reagan had already offered himself as that someone. What Clancy did was seize the role of Reagan’s literary doppelgänger—what the Gipper might have become had he chosen writing instead of politics after ending his acting career.

Clancy’s own career took off when President Reagan plugged Red October as “my kind of yarn.” As well he might: Clancy shared Reagan’s worldview. His stories translated that worldview into something that seemed “real” and might actually become real if you believed hard enough. Reagan was famous for transforming the imagined into the actual; despite never having left Hollywood during World War II, he knew, for example, that he had personally witnessed the liberation of Nazi death camps. Similarly, Clancy, who never served in the military, imagined a world of selfless patriots performing feats of derring-do to overcome evil—a world that large numbers of Americans were certain had once existed. More to the point, it was a world they desperately wanted to restore. Clancy, like Reagan, made that restoration seem eminently possible.

What Clancy did was seize the role of Reagan’s literary doppelgänger.

Soon after Clancy’s death, the Washington Post published an appreciation entitled “How Tom Clancy Made the Military Cool Again,” written by a couple of self-described Gen-Xer policy wonks. “Clancy’s legacy lives on in the generations he introduced to the military,” they gushed, crediting Clancy with having “created a literary bridge across the civil-military divide.” His “stories helped the rest of society understand and imagine” the world of spooks and soldiers. Perhaps not surprisingly, those who served or aspired to serve found those stories to be especially gratifying. Clancy depicted American soldiers and would-be soldiers precisely as they wished to see themselves.

But any understanding gained by either soldiers or society,whether engaged in Patriot Games or fending off The Sum of All Fears, was illusory, rooted in fantasies that sanitized war and conveyed a false sense of what military service really entails. Instead of bridging the civil-military divide, Clancy papered it over, thereby perpetuating it. By extension, he contributed in no small way to the conditions breeding the misguided and costly military adventurism that has become the signature of U.S. policy.

Clancy did prove to be a figure of consequence. Alas, almost all of those consequences have proven to be pernicious. And there’s no Jack Ryan anywhere in sight to come to our rescue.