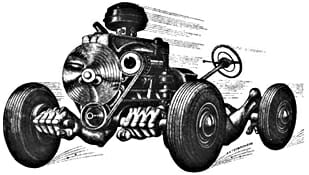 It’s not often in art that the medium is actually the message, or that form really determines content. But computer animation is shaping up as an exception. Early, hand-drawn cartoons bristled with furry creatures, bucolic scenery, fauns: the familiar Disney pastoral. Computer animators, on the other hand, have trouble with nature. Their mammals are creepy as hell (think Stuart Little); they can’t capture a natural human gait; and as far as they’ve come with facial expressions, you can still see the servogears whirring underneath. Computer animation’s strong suit is the mechanical, artificial world.

It’s a fluke of technique that has a huge thematic impact. The highly successful Toy Story movies, co-produced by Disney and Pixar, plunge so unblinkingly into the social order of things that you wonder that children aren’t traumatized by the experience. Parents are also in for a shock as they recognize in the society of degraded objects that populate the Toy Story films certain eerie parables about New Economy America.

This is a break with Disney fantasies of years past. When traditional Disney animators tackled a roomful of toys, for example, the result was Winnie the Pooh. The action shifted outdoors to an imaginary forest where the plush animals, free of their stitches, had a natural setting in which to work through their Freudian hang-ups—or rather, as Bettelheim would have it, where Christopher Robin could master the forces of his psyche before venturing into adult society. In any event, it was a world far distant from the satanic mills that produce, and the megaconglomerates that market, Tigger dolls.

The toys in Toy Story, on the other hand, are acutely aware that they are mass-produced and mass-consumed. They’re alive, yet never break the illusion that they aren’t. They think and feel, yet never allow their wishes to intrude upon those that use them. If Pooh and company are comically self-absorbed, the toys of Toy Story are almost tragically preoccupied with an overpowering social system.

The toys of Toy Story are almost tragically preoccupied with an overpowering social system.

Each of the Toy Story films portrays the struggle of the toys to more thoroughly accept their status as toys. In the first installment, they have to settle all qualms they might have about being objects. The setting is the bedroom of a boy named Andy. Though populated by ostensibly masculine do us with stud names like Woody and Buzz, his room resembles nothing so much as a harem: The toys flop into compliant silence whenever Andy approaches, and behind the scenes they jockey for “play time,” which establishes their rank. Sheriff Woody, the favorite, takes the exalted place on the master’s bed. The movie’s plot is high harem drama: Woody, faced with a glamorous new rival, Buzz Lightyear the Space Ranger, pushes the interloper out of a window in a jealous snit. The other toys, routinely counseled by Woody to accept neglect with grace, upbraid him. The rest of the movie is Woody’s discovery, as he rescues Buzz, that he was a fool to resist technologically ordained threats to his status. Partnering with Buzz, he provides Andy with such great play time that everyone is happier.

Buzz, meanwhile, has the even more wrenching task of accepting that he is in fact a toy. At the outset, he believes he’s an actual Space Ranger, able to fly and able to kill with his lasers. It’s only when he sees a television commercial for himself that he realizes the awful truth—that he is a kept object whose only purpose is to pleasure powerful juveniles.

This sets the stage for Toy Story 2, where the toys not only have to embrace their status as objects but, more specifically, as commodities. Their status as property is now overtly marked—Andy’s name is written in magic marker on the bottoms of their feet, rather vividly branding them as chattel. More to the point, transfers of ownership are also possible, sealed with a simple coat of paint that obscures the “Andy.” What haunts the toys now isn’t loss of status within the hierarchy of the toy room, but the prospect of being traded away.

The movie’s first half-hour catalogues all the ways toys can be trucked, bartered, traded, and sold: retailed in vast quantities (by Al’s Toy Barn, whose obnoxious TV commercials earn the toys’ special loathing); culled for yard sales by fastidious moms (especially alarming to Mr. and Mrs. Potatohead, who desperately cling to each other); stolen by unscrupulous vintage toy enthusiasts (coincidentally, the aforementioned Al, into whose clutches Woody falls); and traded in the upscale collectors’ market (Al plans to sell Woody, a 1950s collectible, to a toy museum in Japan.)

Toy Story 2 doesn’t pretend that a toy’s life isn’t fearful and insecure and humiliating. It simply sets out to prove that there’s no alternative. In their adventures this time around, both Woody and Buzz—the former abducted to Al’s apartment, the latter leading the other toys in a rescue mission—are granted visions of authentic selfhood, only to dismiss them as hollow fantasies.

Buzz’s path leads him to the Toy Barn’s Buzz Lightyear Aisle. There he jostles to life a Space Ranger as delusional as he was in the first Toy Story. Where Buzz clearly sees dizzying stacks of toys for sale, this other Buzz sees ranks of disciplined troops. Where our Buzz knows that Space Ranger gadgets are just for show, the toy store’s Buzz thinks his lasers dangerous and his anti-gravity generator functional.

Buzz’s double manages to live in a bubble of purposive labor and instrumental competence—though it is a running joke that he’s actually a mentally shortsighted Mr. Magoo, the world serendipitously sustaining his delusions—while our Buzz is caught in what Susan Faludi has described as a “culture of display.” In fact, to differentiate himself from his doppelganger, our Buzz proudly displays his “Andy” to the other toys. (They cheer.) To be marked as a commodity and to be self-conscious about it—is as much a sign of belonging in the toy room as it is in postmodern America.

Woody, the symbol of Natural rather than Industrial Man, has a more complex reaction to his unalienated double. In Al’s apartment, he discovers something like a native culture. There are the other members of the Woody’s Roundup collection: the Old Prospector, an oracular elder never removed from the box; Jessie the Yodelin’ Cowgirl, Woody’s sidekick; and Bullet, Woody’s horse. There is gulch scenery and a miniature saloon. And there is “Woody’s Roundup,” a TV puppet show that gives Woody a grainy, ethnographic glimpse of his culture when it was still intact, where “Woody” the puppet original, protects the old and female, dominates his horse, speaks the language of the animals, and accompanies himself on his own guitar.

But Woody sees all this only from the outside. He recognizes the wealth of kitsch artifacts—from yo-yos to toy banks—as part of a marketing juggernaut from years gone by, his musical heritage as a collection of novelty records. Even his companions, backstage, display a distinctly postmodern consciousness: The grizzled, traditionalist Old Prospector is actually a sly Machiavellian whose dearest dream is to spend a comfortable immortality inside a glass case (a dream for which he actively sabotages Woody’s attempts to return to Andy); and Jessie is a markedly lesbian Yodelin’ Cowgirl, singing a tearful ballad, “When You Loved Me,” to the memory of a girl owner who eventually forsook her for makeup. Woody learns, as all Third World people eventually must, that the past can exist only as a museum piece.

Woody’s only real choice is between the mass gaze of Asians and the personal devotion of Andy. “When he plays with you,” Woody gushes, “even though you’re not moving, you feel alive, because that’s how he sees you.” The toys only feel fully alive when they’re submitting to Andy’s creepy fetishes, not when they’re actually moving and talking. This is because Andy’s virtuosic play life—each stray fifteen minute session of which is a Cecil B. De Mille set piece that encompasses not only the astronaut and the cowboy, but a cast of thousands of toy soldiers, potatoheads, slinky dogs, dinosaurs, Barbies (!) and Little Bo Peeps—is the motor of the political economy that the toys inhabit. A less energetic form of exploitation (by, say, museum goers filing past Woody) wouldn’t be sufficient to support the ever-burgeoning population of playthings and Disney-licensed accessories.

This, the filmmakers tell us, is the only choice we have. In making it we have built an economy of self-abnegating customer service, religiously charged consumption, and sheer voraciousness capable of triumphing over the less orgiastic economies of the East. But the filmmakers also point to a looming crisis: that Andy will someday grow up. Adults in the Toy Story universe are rational accumulators. When they see a toy, they see dollar signs. But you can’t run an economy that way. Without the use value provided by childish fantasy, the whole thing collapses.

The toys have no illusions about this, even though in the denouement—with Woody and Buzz safely returned to the toy room, and with Jessie and Bullet (happily “Andy’d”) in tow—they act like any good domestics by sentimentalizing their young master’s budding manhood. Woody claims that he “wouldn’t miss it for the world,” even though he knows that for him it spells the landfill. But these protestations come with a wink, as the toys turn their heads to Andy’s younger sister (“Yee-HAW!” yodels Jessie the lesbian cowgirl.) Andy may be on his way out, but younger generations will provide salvation.

That’s the difference between the Edwardian society that provided the soil for Winnie the Pooh and the postmodern, New Economy America from which the Toy Stories have sprung. The older movie might have valued Christopher Robin’s eventual adulthood, but in the newer film adulthood is beside the point. Like the chicken that’s just an egg’s way of making another egg, adults are merely the means for one infantile consumer to produce another.

Confronted with the thought that I would have to watch the Andy Samberg comedy Palm Springs on Hulu because it was. . .

You’ve Got No Mail

On the long, manufactured crisis of the United States Postal Service.

On the Rudeness of Mobs

In October of 1769, a conservative Boston printer broadsided a bunch of the day’s leading activists.

Art for No Man Is an Island.

No Man Is an Island

Martin Eden rails against the cult of individualism.

Art for Hanging by a Strand.

Hanging by a Strand

On providing therapy for agents of state violence.