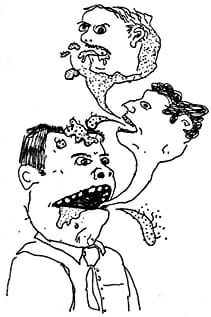 Canada has never been a hospitable land for right-wingers. Even so, 1991 was a low point for the country’s long-frustrated friends of wealth and established power. Unemployment had soared to almost 11 percent, putting an already well-organized union movement on the offensive. A public sector strike was raging, with workers campaigning against a wage freeze. Toronto’s public transit employees followed suit, tying the city up in traffic jams. To make matters worse, Ontario had just elected a nakedly left-wing party to run the province—the New Democrats, a tax-and-spend gang headed by one of those fey, bookish elites so loathed by the right.

A bleak spectacle indeed—particularly for Conrad Black, Canada’s expatriate media baron. In the Canadian daily business paper the Financial Post, he surveyed his home and native land and offered a scathing prognosis. “Only in Canada, especially in Ontario, are the prig stormtroopers of the old, soft, anti-capitalist left still taken seriously when they insolently strive to communize industry, confiscate wealth, and discourage economic growth,” he railed. “Only in Ontario in the entire democratic world, is the cant and hypocrisy of union-dominated soak-the-rich, anti-productivity, politics of envy officially approved and po-facedly presented as ‘caring and compassion.’” Worse, he moaned, the best and brightest Canadians, “demoralized by the socialist quagmire,” were fleeing to the United States.

After a few more desultory stabs at Canada’s tweedy left (alternately described as “simpering” and “driveling”) Black came to the meat of the matter: What Canada needed, dammit, was a dose of hard-assed American-style values. It needed tax cuts, more tax cuts, and union busting. Black fondly recalled Reagan’s and Nixon’s legendary beatdowns of the air-traffic controllers and postal workers. It was, he concluded, really quite simple. Canada needed a culture war, a massive backlash of the kind that had propelled his American heroes—and, indeed, the world—into the age of the market.

Only one niggling problem remained: How could the simpering, driveling Canadians be made to see the light?

He himself can’t really turn on the populist vibe; he harbors some very pronounced aristocratic pretensions.

With a national newspaper, that’s how. Before long, Black launched the National Post—one of the most aggressive, not to mention expensive, backlash vehicles in Canadian history. From its debut on October 27, 1998, the daily has delivered a virtually non-stop harangue against taxes and organized labor. Many newspapers reflect their owners’ viewpoints, of course; but the National Post is so thoroughly choked with free-market zealotry that it appears at times to have been written entirely by Black himself, then faxed directly to stunned readers in Moose Jaw or Saskatoon. I’m exaggerating, but only just: Black is, after all, renowned for calling up reporters at some of his most obscure daily papers and dressing them down for false consciousness—as he recently did at the Montreal Gazette, bawling out a hack who had dared to criticize his concentrated control of Canada’s media.

And so it goes with the Post. Day in, day out, the paper adheres religiously to Black’s prime directive: Canadians must either pander to the rich, else watch them flee to the risk-and-reward empyrean of the United States or some other tax haven even further afield. “The yacht clubs in the Caribbean and the slopes of Switzerland are filled with wealthy Canadians who will never pay a penny of taxes here, or anywhere else, again,” as one columnist scolded. And it’s not just the rich who are fed up! An even more important actor in the make-believe world of Blackian theory is the mad-as-hell middle class, who just aren’t going to take it anymore. To read the National Post one would believe there is a virtual tsunami of “tax rage” sweeping the country, turning average Canadians into “tax rebels”—refusing to pay up and preparing to hunker down with cans of tuna to await the jackbooted Mounties. “When a nation’s citizens are backed against a wall and have little left to lose, they take desperate measures,” admonishes Post tax columnist Jonathan Chevreau. Black even began using the Post to distribute copies of The Wealthy Boomer, an anti-tax magazine whose title—despite its viciously populist, down-with-elites content—is just about the most obnoxious bit of class boasting imaginable. (Okay, calling it The Contented Yuppie would have been worse.) Meanwhile, a “special report” in a February 1999 Post devoted entirely to the anti-tax movement offered glowing profiles of marginal tax-rebel groups, musings about Laffer-curve economic theory, and polls categorizing different sectors of the Canadian public as “high rage” or “medium rage.”

The really weird thing about Black, though, is that he himself can’t really turn on the populist vibe. Quite the contrary; he harbors some very pronounced aristocratic pretensions. For years, Black has lobbied desperately for admittance to—get this—the British House of Lords, bending himself backward in sucking up to the most calcified symbol of class hierarchy in existence. Last year, Black even went so far as to enlist Tony Blair’s aid in an eleventh-hour bid to snag a peerage. Unfortunately, the plan fell afoul of a Canadian government policy prohibiting citizens from accepting honorary titles that “confer any precedence or privilege.” When the government told Black he couldn’t don an ermine robe in the Sceptr’d Isle, he immediately went apeshit and phoned the Prime Minister to complain. The impudence! The arrogance! The leftism!

Granted, Black has picked his victim well. If you’re going to stage a Nixonian freak-out about socialism today, Canada is one of the few places you can still do so without seeming utterly bonkers. It remains an oddly left-wing place in subtle ways and—all the worse for Conrad Black—those ways tend to be the national characteristics most cherished by Canadians themselves. As the Canadian political theorist Gad Horowitz has argued, the country’s cultural DNA includes a powerful strand of early British trade unionism, mixed with a lot of union-positive European immigrants. This is not a freemarket crowd. The idea of communally pooling money to pay for stuff like health care is the bedrock of the Canadian psyche, not some elitist nostrum imposed from on high by trip-hopping tenured radicals. Canada’s would-be backlash warriors are left slightly unsure of who precisely to attack, which is why the Post frequently seems to be flailing at anything. Worse, invocations of the glories of American life are instantly derailed by the fact that Canadians, living right next to the United States, have seen enough hair-raising stuff to realize that Beverly Hills 90210 and Friends don’t quite reflect the real state of everyday America, with its medically uninsured middle class and crumbling public education system. Yeah, sure, it’d be nice if we never had to pay taxes, everyone figures—but who wants to end up like Detroit? This quaint xenophobia powers more Canadian politics than you’d imagine, which is why endless surveys and polls have found that, the Post’s jihad to the contrary, few Canadians are stirred by Black’s dream of massive tax cuts. One study by Ekos Research even shows that anti-tax sentiment has been falling ever since 1977.

This is what has made Conrad Black’s great cultural experiment so intriguing to watch: It’s almost psychotically divorced from everyday Canadian reality. Ordinarily, even the most deformed backlash politics arise out of some bitter claim of injustice inflicted on the hoi polloi, some smoldering sense of being hard done by. Since no such anger really exists in Canada, it leaves the Post’s hapless reporters forced to holographically create their own revolt, spinning isolated cases (here, a shopkeeper who decides to stop paying taxes;j there, a bug-eyed letter to the editor) into a full-on “rebellion.” Meanwhile, the paper’s editors feebly protest that what they’re doing isn’t cravenly serving the ideological (and financial) wishes of their rich-as-Croesus boss; they’re “crusading,” in old-skool newspaperman style, trying to wake up the country’s somnambulant public. At its best, the paper can be a lively, British-style read; anyway, it’s always fun to read a paper that actually comes clean about its ideology. But at its worst, the Post’s screeds seem simply hallucinatory, directed to the citizens of an alternate universe who lie awake at night, fretting over whether “taxation is legal.” Who are these people?

If there’s a market for American-style rage in Canada, he hasn’t found it.

Albertans, possibly. Alberta, being soaked in oil and cowboy culture, comes the closest of any region in Canada to producing Texas-style riches, and thus Texas-style right-wing fervor. Black adroitly realized this, and appointed a young Albertan, Ken Whyte, as his editor in chief. Under Whyte’s guidance, the newspaper has devoted seas of ink to Western concerns, under the assumption that they will metastasize and eventually consume the entire country. This technique can at times work fairly well; even the most po-faced, envious, driveling Toronto intellectual will acknowledge that the West probably has some ideas worth considering about how to run things. Hell, those Albertans are still Canadians, aren’t they? Quite, old chap, quite. And many credit the Post with single-handedly creating the new right-wing Western protest party, the Canadian Alliance, by running an endless stream of boosterish stories about its members.

But with Western suspicion of taxes has come the Western mania for family values—including ranting denunciations of feminists and other modern-day witches. From day one Whyte has waged a tireless crusade against women’s issues. Reporters have argued that pay equity distorts the market (Headline: “Courts in grip of radical feminism”); that boys are subject to rampant discrimination (“It’s a bad time to be a boy”); and that battered women are … kind of asking for it, ain’t they? (“Spinning the spousal abuse story”). Indeed, perhaps even more than its anti-tax crusade, the Post’s rabid antifeminism decisively removes the paper from the Canadian political orbit, and sends it spinning off somewhere not too far from the moon, or perhaps Pat Robertson.

It is the final irony of Black’s project in Canada: For a guy so convinced that free markets will sort everything out, the Post has the centrally planned feel of a North Korean government newspaper. And such is Black’s mania that he has poured millions into keeping the paper going, even as it geysers red ink. If there’s a market for American-style rage in Canada, he hasn’t found it.

In fact, he’s packing up his tent and leaving. In August 2000, Black announced that he was selling his Canadian newspapers—including fifty percent of the National Post—to a Canadian TV mogul named Izzy Asper. Asper is not only considerably more liberal than Black, he’s actually a Liberal, having spent a five-year stint as leader of the Liberal Party in Manitoba, a province renowned for left-wing rule. He may have abandoned his homeland to the socialist quagmire, but hopefully there is a happy ending in store for Black himself. Maybe all this will finally clear the way for his admission to the House of Lords, where he can rage and vituperate on behalf of the world’s long-suffering rich to a more sympathetic audience.