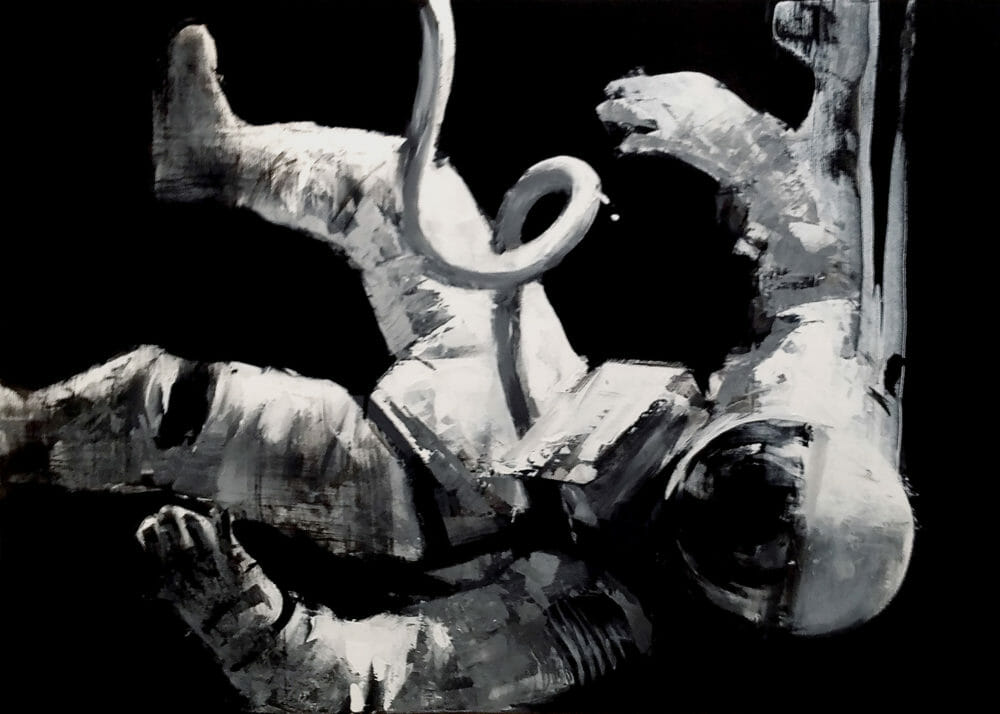 The Hayden Planetarium in the Rose Center for Earth and Space at the American Museum of Natural History offers Space Shows every half hour in its 429-seat Space Theater. Sealed under the mammary swell of its 67-foot screen, the viewer is invited to enjoy “a hyperrealistic view of the planets, star clusters, nebulae, and galaxies” emitted by a custom-made Zeiss Mark IX Star Projector. Some years ago, I paid my $22, entered the chamber, and settled beside my date into one of the plush, reclining seats, tilting my head back as the stars rose. I lasted approximately five minutes before I had a panic attack.

It turns out that being sealed in a dome of celestial blackness and invited to contemplate eternity is a terrible date activity for an agoraphobe.

I have always hated space. While I don’t harbor any particular animus toward astronauts, my childhood aspirations never involved learning to pee in antigravity conditions or eating freeze-dried sausages. (NASA’s most appealing adjective for its own space food is “thermostabilized.”) In recent years, I have wantonly ignored the Matthew McConaughey space movie, the Sandra Bullock space movie, and multiple Matt Damon space movies, because thinking about the pure wild void feels like a fist at my throat.

As an American trained to think of the moon landing as one of my country’s signature accomplishments, I experience my willfully earthbound imagination as an acute kind of lack. Space-related imagery bombards us as children, encouraging the young to dream higher than the Kármán line (while conveniently failing to note that the sheer nothingness of that black realm would rend tiny bodies, along with their cosmos-conquering dreams and astronaut pajamas, to bloody atoms). These days, space tourism is already within reach for select multimillionaires, and our new millennial titans of wealth—Jeff Bezos, Richard “Branscum” Branson, Elon Musk, et al.—are building up their own private space exploration empires, hoping to lure the merely very-rich, too, into the cosmos. Via his pet project, SpaceX, Musk is building a fleet of nimble craft called Dragons, like a billionaire Daenerys Targaryen with a receding hairline.

If a tiny robot, a crisply designed penguin, and a cheerful rabbit can conquer space, might even a space-phobic soul like me dare to dream of it?

And what, after all, is American life if not a desire to ape the whims of the wealthy? Nevertheless, I quail at the thought of following in their footsteps. How can a girl who sometimes struggles to leave her apartment access the infinite American dream?

Perhaps in response to the new influx of moguls into the solar system, governments have begun to offer friendlier and more accessible iterations of their space programs. The Cold War has ended at last, and the final frontier now abounds with treacly mascots bent on proving that the universe can countenance kinder beings than giant fireballs and black gravitational thirst-holes. For reasons best known to themselves, China, England, the United States, and even Italy have created adorable mascots for various aspects of their space programs: avatars waving, like the solitary Little Prince, reassuringly from the wastes.

Perhaps the most dramatic example was China’s Jade Rabbit moon rover, named for the being that Chinese mythos has placed on the craggy surface of the moon—pounding out the elixir of immortality with a mortar and pestle, endlessly, for the lunar goddess, Chang’e. The little Rabbit gained a fandom millions strong, sending plucky, cheerful updates on the Chinese microblogging platform Weibo into the ether, often addressed to the “masters” that controlled it. Of an April total eclipse of the moon, it asked, “Why blush?”

NASA’s ICESat-2 project, in turn, gave us Paige the Penguin, named by a class of Maryland second-graders, her sleekly drawn profile befitting the nature of the project: studying the cryosphere (otherwise known as “ice”). Paige has one navy-blue eye and a sharply hooked beak and is pictured, in an artist’s conception, hovering above the Earth bathed in a vague white glow; a paler, ice-blue wing gestures into the blackness, her level gaze that of a reassuring guide.

And at the education-oriented National Space Centre in Leicester, UK, a tiny, ottoman-shaped orange robot named 2.0 soared twenty-one miles above the Earth hanging from a weather balloon, taking aerial selfies with an even tinier Union Jack. Its minute, fixed smile said: neither sun nor moon nor Earth itself shall set on my empire. Teensy arms dangling, it almost Brexited the atmosphere.

If a tiny robot, a crisply designed penguin, and a cheerful rabbit can conquer space, might even a space-phobic soul like me dare to dream of it? Even on those days when the threshold of my apartment seems as formidable a barrier as Earth’s atmosphere, can I, too, imagine one day colonizing distant planets, wearing space suits that come in plus-size, and shuttling through the galaxy accompanied by my happily anthropomorphized space buddies?

The answer is still no.

The truth is that these space mascots are designed to lull us into accepting the nothingness that swallows our planet whole, but I will not accept it, much less come to love it. Consider this: In the insipid autobiography of Paige the Penguin, the guileless second-graders who ghostwrote it exposed the inherent lie in her symbolism. “It is my dream to be able to fly, however, I am not able to . . . My other dream was to become the first penguin astronaut, but instead of letting me go to space, NASA let me be the mascot,” she says. Ultimately, is Paige evidence of NASA’s anti-penguin sentiment?

As for 2.0—the uncharismatically named robot that kissed the void in the name of Britain—I will let the Leicester Mercury speak of his ungraceful end: “A video camera filmed the entire two-hour journey and also captured the moment the balloon burst and 2.0 came hurtling back to Earth.”

Most famously of all, Jade Rabbit live-blogged its own demise, perishing, powerless, on the barren face of the moon. “Good night, Earth; good night, humanity,” it cried at the last, like a feebly beeping Hamlet.

The dark fable of the space mascots tells us not to venture beyond the bounds of air, water, kin, abode; not to stray into the dark and howling vacuum that surrounds us, flaring with ghastly nebulae. The stars still make me cringe, delivery-food receipts clutched in my sweaty fists. Let others dream of airless expanses, give years of their lives to cramped journeys propelled by incalculable fuel and expense. Psychically and physically, I am lodged in the Earth like a tooth, and nothing, save its total destruction, can shake me loose.