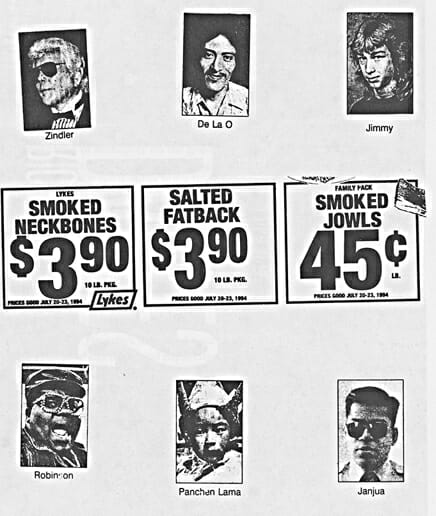 There is unrest in the empire of visual cliché. For years American purveyors of “stock photography” presided over a contented realm of jolly milkmen, smiling moms, and satisfied customers. Today, though, it’s all teenage temptresses and homelessness. What’s happened in the happy house of cliché?

Generic by definition, stock photography has been used since the 1920s to achieve instantly recognizable symbolism in advertising, magazines, annual reports, and industrial brochures. Stock agencies provide Madison Avenue a cheap alternative to expensive shoots, union hours and temperamental talent, collaborating with the ad world to form the backdrop of that phantasm, the American Dream.

A glance through catalogues of stock photography, past and present, provides a fascinating visual guide to this century’s marketing clichés—from the surreally waxen tableaus of fifties and sixties white suburban America (the weenie roast; dad playing catch with junior) to the Armani-wearing Masters of the eighties Universe. But today the cliché experts are veering into strange territory indeed: “social realism” featuring staged violence, drug abuse, and sex in Hollywood-like quantities.

Welcome to the “reality revolution,” the latest creation of stock photo agencies that know their clients’ bottom line cultural requirements: the consumer Utopia of the past no longer sells, except perhaps in a recycled, ironic “Nick-at-Nite” kind of way. What moves units these days is dysfunction and dystopia. After all, it was an implied kiddie-porn casting call that revived Calvin Klein’s flagging jeans empire, and the disaffected ad campaign of Coca-Cola’s OK soda that heightened its appeal to so-called “Gen-X” consumers.

Now, having so long embraced the language of happy consumer Utopia, even the stock photo houses are replacing the Vaseline-smeared soft focus with the harsh light of day, the mother-and-child cuddle with a crack baby’s wizened face. FPG International, one of this country’s largest stock photography houses, would have us believe that this change heralds a coming to terms with the nature of contemporary society, warts and all. Utopia may not sell in today’s tough market, but real warts sell even less, so the chances are there’s more than just the love of truth behind the company’s recent release of Real Life, a stock photo catalogue whose many offerings purport to take into consideration the current atmosphere of “social upheaval, shifting values and an environment on the brink of collapse.”

“Instead of skirting controversy,” writes FPG chairman Jessica Brackman in Real Life’s introduction, “today’s ads address it. Real issues. Real emotion. And a style of visuals that capture the essence of our time.” But whether the catalogue’s photographs take as their point of departure stylized emotion or emotionalized style, one thing is certain: real life, as lived by real people in real situations, is something they do not depict. (For one thing, the people depicted in stock photography are, by and large, paid models who must sign a model-release form before the photograph begins its commercial circulation.) The “real life” to which the title refers is the reality of market research, fed back to the consumer via ersatz commercial experience.

Apocalypse and social deterioration may be the Next Big Thing.

Traditional stock photo catalogues were divided into generalized categories such as People, Industry, Animals, Travel, and Nature to help art directors or account executives locate a particular image. FPG, though, has taken what could be called a more philosohical approach to displaying its latest offerings, with chapter headings that begin with Birth, Childhood and Adolescence, then work through Adulthood, Family, and Aging and finally, for good measure, address such hot topics as Health, Education, Work, and Community. Rather than allowing the photographs to speak for themselves, FPG has jazzed up their presentation by interspersing contemporary buzz words (“natural childbirth,” “pre-natal care,” “disposable diapers,” and “crack babies”) with faux-alarming statistics (“50 years ago, a baby born in America grew up in a country that was 90 percent white”).

A young girl looks out at the camera, head tilted vulnerably to the side. She has been crying, and the side of her cheek is streaked with tears. She has a shiner that is the same mottled purple as the indistinct backdrop behind her. She is featured, along with a bevy of swollen-lipped, neglected-looking children, in Real Life’s Family section, which offers ad execs quick-reference subcategories like Abuse, Divorce, and Split-Shift Parenting. But is this social realism or just a shift in cliché? In the 1950s a little girl would have appeared in stock photos with lips painted an innocent, albeit fetishistic, lollipop red; today the pictures resort to the visual language of brutality for effect—the murky background, the pouty sadness and the carefully-painted black eye. While such an image is more likely to be used by non-profit or health-related enterprises, the commercial vernacular of physical and sexual abuse has long been a mainstay for the world of fashion advertising and magazine pictorials.

The “Alternative Lifestyle” subcategory of Real Life’s section on Adulthood is also revealing. Featuring a page of exclusively white, upper-middle-class-looking gays and lesbians engaged in tender (i.e. non-offensive) moments of hugging, hand-holding, and Eskimo nose-rubbing, it is testimony more to that demographic’s disposable wealth and image-savvy rather than—as the New Right never tires of accusing—its widespread acceptance. Although shot in a number of locations using various color and black-and-white aesthetics, the three photographs meant to represent gay male relationships on one page all depict the same couple dressed in the same clothing, give or take a blazer or overlaid sweater. One black-and-white shot shows them sitting on a staircase, engaged in laughing conversation, arms wrapped lovingly around each other. Flipping ahead twenty-five pages to Real Life’s chapter on Health, subcategory AIDS, one finds the same couple sitting in the same stairwell, only now they are sad and comforting each other—the implication clearly being that one or both have contracted the deadly virus.

Real Life revels in the obsolescence of older stock images. A favorite tactic of its compilers is to juxtapose images of church-going, McCarthy-era America with those of the gritty now. In the catalogue’s final chapter on Community, a hokey fifties photo of a smiling girl wheeling her bicycle across a school crossing—aided by a kindly traffic cop—is dwarfed by a grainy black-and-white shot that reveals the blurred outlines of a school bus in the background and a crime scene blocked off with police tape in the foreground.

Clearly the clichés have changed. But the stock dreams of our consumer culture have not. Apocalypse and social deterioration may be the Next Big Thing—“the single parent, the disillusioned executive, the medically uninsured,” as FPG recounts in its catalogue—insecurity has always made a strong sales pitch. But the market itself chugs along unquestioned, unexamined. Whether its a jolly milkman or a menaced child who appears on the billboard, it’s the life defined by products that’s being endorsed. Consumerism, like communism, controls the clichés. Perhaps that’s the key to its strength—and also to its ultimate undoing.