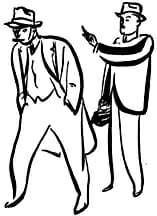 Madison, Wisconsin was by no means the Athens of the Midwest—unless Athens is badly overrated—but it looked awfully good to a homegrown Marxist from downstate Illinois in August 1967. In Champaign of unhappy memory, a mucky green-bottomed swamp passed for a picturesque body of water, and lovers (presumably either married or chaste) rowed around when the summer heat became too unbearable for any other activity. Madison, meanwhile, had five lakes, the big ones then suffering only mildly from agricultural runoff, and lovers of unrestricted if not perhaps unlimited variety on the campus side. Besides, Madison had so many peaceniks, left-wing intellectuals, bohemians, and just plain Jewish liberals that I felt more at home, the first week there, than in twenty years of my old neighborhoods.

One of the best and most recognizable aspects of Madison was its left/right confusion and its deeply upper Midwestern prejudices. There were Swiss communities in close driving distance which had voted in referenda against U.S. participation in both world wars, the Korean War, and Vietnam. The city’s newspaper, the Capital Times, had in fact been launched to oppose the earliest “war to end all wars,” even if it had lost most of its sense of tradition fifty years later. The local right was made up of the usual real estate interests, bankers, and bright-faced suburbanites. But even here, among Joe McCarthy’s old admirers, the suspicion of the State and its imperial machinations was not quite the same as it had been in conservative Champaign—or for that matter in ostensibly liberal New York. Isolationism had never really died in the North Country.

Besides, here I had numbers on my side. In Champaign, leading a peace demonstration would get you Minuteman stickers (“You are in the sights of a Minuteman”) on your mailbox and the occasional threatening phone call; in Madison, there were too many reds and too many types of reds for the rednecks to nail.

Here the right had to learn to live with institutions like the leftish student eating co-ops, disproportionately Jewish, which had carried on from one generation to another since the Thirties. Here, antifascism had been the soul of the Good War effort. But came a Bad War, and all sorts gathered on a common ground. Now the children of liberal Republicans (like myself), the children of erstwhile reds, and Milwaukeeans whose parents had elected a Socialist mayor as recently as the Fifties learned that they had a lot in common.

At any rate, this was the right place for my new journal, Radical America, which I’d launched (one mediocre issue) back East while taking a master’s in history. Here I had instant comrades, more Wobbly than Communist in sentiment, including a Movement printer with a single-sheet press (purchased, I learned later, with revenues from staging the theatrical satire MacBird). I even had a mailing list, supplied by the Radical Education Project of Students for a Democratic Society (SDS). Within a year or so, the magazine had reached a readership between two and three thousand, drawing the interest of a mixture of students, old radicals, and assorted intelligence analysts. Occasional “special issues” on women’s history, culture, or black labor ran considerably higher.

The basic idea of the magazine was in the name (perhaps), a play upon the title of a novel by Harvey Swados, A Radical’s America. I had made up my mind that there was a radical heritage to be found here at home, and that no pondering of exotic (i.e., European) theory could substitute for that native tradition. Believing this demanded a certain credulity: In the U.S., homegrown rebels are more likely to be utopians, peaceniks, abolitionists, free lovers, gay lovers, or rawboned spiritualists than labor militants—more petty bourgeois or underemployed than proletarian.

But it struck a chord. Pretty soon, from a second-story apartment in a picturesque working-class neighborhood not far from the water, I was A Man of Letters, at least in that I wrote them by the hundreds and got responses from the likes of Jack London’s daughter Joan, Daniel De Leon’s son Solon (expelled from his father’s Socialist Labor Party in 1913, it was said, for questioning the labor theory of value), Anna Louise Strong (the Seattle Sunday school teacher who had resettled first in Russia then China), and others young and old to whom radical history meant something special.

For a while I did virtually everything but the printing myself: dragging boxes of paper to the press (in a VW), taking pages to an SDS group house for collating (I supplied the good Wisconsin beer), stuffing the mailing bags for bulk orders and envelopes for subs, sending out bills, and keeping a steady correspondence going with “Associates.” These latter were types similar to myself, grad students or dropouts who worked in the off-campus bookshops, took part in mobilizations of all kinds, and had similar intellectual interests, from Johnny Appleseed to Antonio Gramsci. I had the time. The student strikes got me out of teaching for long spells, while my own classes and assorted political work didn’t get in the way too much. Besides, I was suited to working at home even when the romantic political role models of the day were traveling from city to city and coed to coed.

I like to think of my circle of friends, expanded into an editorial board by 1970, as a collection of young left-wing oddballs. My most reliable comrade was Jim, son of the president of a Southern black college and inveterate organizer of left-wing study classes on campus. Poetry editor Dave was a Nietzchean who went to work as a reporter at the Capital Times and eventually led the 1979-80 strike that got him blacklisted from the trade. One of our women’s history specialists was Edie, a survivor of the Japanese-American internment camps; another was Ann, a grad student and sometime editor of the local underground press, who later married a Teamster leader known as the “Lenin of Dane County”; another was Mari Jo, a Polish-American blue-collar girl from a Little Steel town in northern Illinois (later a MacArthur Fellow); and still another, a collaborator on our second biggest special issue (on women’s history), was Nancy, now the president of Oberlin College. Smart people, none of them in the Old left mold.

I said the second biggest hit, because the biggest was Radical America Komiks, a product of my childhood love for Mad Comics (which preceded Mad Magazine and was funnier) and the chance appearance in Madison of Feds ‘n’ Heads, brainchild of dropout grad student Gilbert Shelton. I sold Shelton’s antic comic (arguably the very first “Underground” comic and the one which introduced the Fabulous Furry Freak Brothers) at the SDS table in the student union, and when one day I received a couple thousand dollars from the Rabinowitz Foundation (whose dwindling financial legacy stemmed from, if I remember correctly, the patent on a bra snap), I turned it over immediately to Gilbert. He set up Rip Off Press in San Franciso, and his first production was Radical America Komiks. It lacked Crumb (a big disappointment to me) but was full of a kind of dopey verve. The center spread was gory class war: “The Meth Freaks Fight the Feds to the Finish.”

Meanwhile, we had “discovered” my favorite adopted mentor, the aged political athlete C.L.R. James. This former cricket star and champion broad jumper from Trinidad had been part of the first wave of West Indian literary intellectuals in the Twenties, had written The Black Jacobins (the story of the Haitian revolution of the 1790s), become a noted Marxist philosopher, got himself expelled from the United States during the McCarthy period, wrote a great political book on sports (Beyond a Boundary) and was now the last old-time Pan Africanist on the lecture circuit. He was also a smooth culture critic and a keen observer of daily working-class life—just what we needed for our revolutionary optimism about insurgent culture and (we hoped) the return of social struggle à la the Thirties, without a domineering Communist Party, naturally.

I remember James best in the restaurant of a once grand, now seedy Madison hotel, drinking tea with milk and spreading marmalade on his toast, British style, before setting off to wow a circle of admirers with running commentaries on classical art, Hegel, Black Power, and the insurrectionary impulses of Parisian workers and students during May 1968. He only came to Madison now and then, but his aura surrounded us, perhaps because, like Madison itself, he was so far off the usual map.

Of course things never worked out the way we thought they would in some great global burst of freedom. And yet there were isolated victories. My teaching stint ended, ironically, just as the Teaching Assistants Association nearly won a major strike against the university and began working to send its vigorous new leaders to the head of the local labor federation and eventually the state AFL-CIO. Madison was in many ways a good place to be during the torpid Seventies, frozen in time with a radical mayor and a drastically reformed police force. But I was only a summer visitor in those latter days, past going back.

Even so, I have never stopped feeling that leaving the Midwest a second time was the biggest mistake that I have ever made. What I should have been doing—what we all should have been doing in 1971—was looking for a place to make a stand, to go on contesting power and looking for new possibilities. I’m pretty sure, looking back, that I would have been more effective as a homeboy, within at least my regional world if not my literal hometown.

Maintaining that vision of homegrown radicalism has grown more relevant than ever in the years since then. There is no such thing as Far Away in the global market, and Americans remain the country club set of the planet, as blind or indifferent to the cost of their golf course existence as the frat boys and debs back in dear old Champaign. We need to awaken to ourselves, to our disappearing jobs (returned as low-wage and second-tier work), to our vast prison industry, to the limits of environmental expropriation, and to the reality of a drastically changed working class, increasingly female and nonwhite. Our national saga and the story of radicalism is expanding far beyond Radical America’s perspective, including Emilio Zapata along with Eugene Debs and Martin Luther King Jr.

The history of American radicalism has always been profoundly discontinuous: Only a few times in a century can we expect millions of ordinary folks to exclaim, “I’ve been lied to all my life!” Little magazines will doubtless continue to have an outsized role in the wake-up process. While their big, slick cousins organize themselves in terms of advertising dollars or the prestige needed for more of the same, the little magazines go about attracting the acid iconoclasts, the homespun utopians, and the creative cranks needed to break through the layers of ideological detritus accumulated since the last wave of challenges. Radical America’s sun has set, but there are always new figures moving along the horizon.

The pod-ification of all experience looks different in quarantine.

Meditations in an Emergency

Worker writers take stock of a world reshaped by coronavirus.