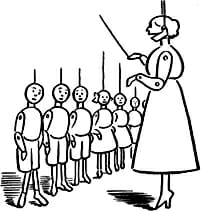 Russell Roberts is that rare bird of the dismal science, the public economist. While his colleagues glory in mathematical obscurantism, shrouding even the most patent of observations in indecipherable formulae, Roberts sings hosanna in low-church tones to the democratic blessings of free markets. From his sinecure at Washington University, he cranks out op-eds for the St. Louis Post-Dispatch and commentaries for National Public Radio, condemning government meddling or touting the virtues of Wal-Mart. His rhetorical gifts are not to be discounted. “(M)any of the poorest Americans live better than the robber barons of the 19th century,” went one memorable argument in the Post-Dispatch. “Hardship in 1880 was surviving the winter. Today it’s surviving without high-speed Internet access.” Pithy and accessible, it’s a mode of argument that knocks ’em dead on talk radio and in Objectivist chat rooms.

Like other libertarians, Roberts started to feel his oats as the millennium dawned. But where many of his comrades’ proselytic impulses took a messianic turn, his shifted to the lyrical, as is evident in his 2001 opus The Invisible Heart: An Economic Romance. The tide does not mislead: this book is in fact a love story, and it’s about a guy who’s really into the theory of free markets. If unsettling visuals are flitting through your mind, relax. There is no sex in this Harlequinized Platonic dialogue. The hottest action is the Fabio-sized sloppy kiss the author delivers to the spirit of bare-knuckled capitalism.

That’s fortunate, because literature is not ready for the sort of relations Sam Gordon and Laura Silver would have. Sam and Laura are teachers at the Edwards School, a private high school in Washington, D.C., that caters to the spawn of the power elite. Laura teaches English, including the Romantic poets, and is full of fuzzy, half-formed thoughts about how everyone should be entitled to free health care and other gratuities. Sam, meanwhile, teaches economics and holds only crystalline opinions. Air bags, the New Deal, lawyers, food stamps, regulators, anti-globalizers, and Michael Douglas are bad; the market divine. Sam does have some interpersonal issues. He’s the kind of guy who wears a tie bearing tiny cameos of Adam Smith and delivers rhapsodic filibusters about classical economics. When he’s up, he can be sentimental and warm (“There’s an invisible heart at the core of the marketplace,” he gushes, “serving the customer and doing it joyously.”) He can even be a wild man (“I love that no one’s in control,” he enthuses, again in re markets.) But when he’s down in the dumps, Sam is all about Nixonian self-pity and narcissism. “[ I ]f you had my views, you would be lonely and embattled,” he pouts to Laura, “but you could take solace in being right.” What’s not to hate about this guy?

Naturally, Laura at first finds Sam a bit creepy and boorish, but slowly she understands, and perhaps even sympathizes with, his struggle. Poor Sam! How he suffers as his beloved capitalist system is attacked in movies and TV shows controlled by gigantic media conglomerates. Meanwhile, a senator is scheming to have Sam purged from the Edwards School for teaching heresy to his daughter (who, in a sadly underdeveloped storyline, appears to have a crush on the teacher—the girl can’t help it!). Things get worse at a party at Laura’s parents’ house, where her preening liberal lawyer of a brother provokes Sam into a blow-up. (Sam later reflects that Andrew’s “linking of Milton Friedman with ‘Neanderthal’ pushed him over the edge.”) Bit by bit, Laura comes to recognize in Sam nothing less than the quintessential hero of the romance novel, the Rebel.

Like most literary rebels, Sam is misunderstood. He is not just some flinty misanthrope. He wants the world to be a better place, wants the poor to be helped, everyone to be happy. He just doesn’t want the government involved, because the market will get the job done and done right. CEOs will do the right thing because the market will punish them if they do mischief. If people aren’t taxed to provide for those whom capitalism leaves behind, the benevolent hand of the market will guide altruistic individuals to do the job. “I’m in favor of helping the poor,” Sam pleads. “I don’t want people to go hungry. I just don’t think it’s right to force people, even selfish people, to give.” But more than being an efficient transaction engine, the free market also permits self-realization and actualization. Sam rejoices in factory closings because deindustrialization saves the children of blue-collar drudges from inheriting dead-end lives. As he explains to Laura:

Because factories get moved to Mexico and others are shut down, capital and creativity are unleashed to open new fields, new jobs and new opportunities. . . .[Since 1950] we have replaced those jobs with opportunities in computers, information technology, telecommunications and the myriad of new industries of American excellence. Imagine how much poorer we would be if we insisted on keeping all the jobs in manufacturing from 1950 and not letting those factories close.

Passages such as this, larded throughout the book, provide ample amusement for the sophisticated reader. Those with a less developed sense of camp, however, will bristle as Sam gets the best of his simple-minded inamorata. Indeed, Laura’s training in English literature, good for affairs of heart and hearth, provides no guide to the understanding of the material world. Sadly, she never summons William Blake in her arguments. Ditto The Jungle, the U.S.A. trilogy, or even any number of John Grisham novels. Instead she dumbly ponders Sam’s mind-bending homilies, like this one on the brutality of working conditions at the turn of the century:

What was the alternative to those hardships? We could have given them money to ease the economic burden. But that money would have had to come from somewhere. We could have legislated shorter hours and better working conditions, but that would have meant lower wages, fewer jobs, and less productivity. If we had gone to the extreme and shielded those men and their families from economic hardship, we would have eliminated the suffering. We also would have eliminated the incredible growth that transformed America over the last century.

While it’s always heartening to see an economist recognize other people’s suffering, it’s more than a little disturbing to consider that Sam represents the way Roberts and his ilk think when they’re at home. Milton Friedman and Amity Shlaes, among others, render perfunctory blurb praise for Roberts on the novel’s back cover. Oddly enough, none seems to recognize the author’s almost heroic accomplishment—Borgesian, really—of creating a parallel universe in which an unreconstructed laissez-fairista is an outsider in the home of K Street, the World Bank, the International Monetary Fund, Cato, and Heritage. Maybe it’s because such a make-believe world is the only one in which a libertarian may live.

Ah, but what a difference a couple of years make. Wage and wealth polarization, hollowed-out pension funds, economic dislocation, eroding security—these and other hallmarks of the young 21st century might put a kink in lissome Laura’s pretty brow. What a sequel we might have now. (I don’t want to give anything away, but the novel leaves Sam and Laura in a sort of open-ended, noncommittal thing.) After Enron, after WorldCom, after the creative destruction of billions in retirement savings, maybe Laura could find her voice. Maybe Sam could lose his job and his 401(k), and have to move in with her. Maybe they could play that game where she’s the Nanny State.

Spiritual enrichment of the non-monastic sort comes in all variety of human packages these days, from the. . .

The Wave of the Future

Episode 4: The British election, the French election, and the strange rise of fascism among the youth.