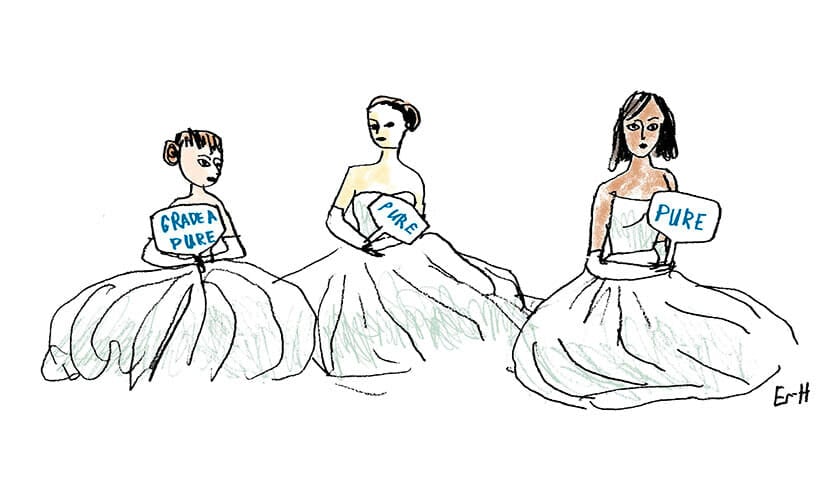 St. Cecilia crashes a purity ball, with Sarah of the Desert and Melania the Elder as her dates. They are confused by what they see. Teen and pre-teen girls in white gowns dance with older men. A couple stops and poses for a picture, the man’s hands lying awkwardly on the girl’s shoulders or boldly encircling her waist. Or maybe the photographer catches an embrace, the girl’s head resting on the man’s shoulder. St. Cecilia photobombs, and then leaves early with her chaste posse of ascetics, headed for a screening of Mad Max: Fury Road.

It’s hard to say which is stranger, that grown men have primped themselves up for a middle-school dance or that each couple is father and daughter, here to make ardent sexual declarations to one another. The girl is meant to undertake a vow of chastity and abstinence, something like the True Love Waits pledge, “Believing that true love waits, I make a commitment to God, myself, my family, my friends, my future mate, and my future children to be sexually abstinent from this day until the day I enter a biblical marriage relationship.” The father makes his own vow, to act as the girl’s protector and authority and to lead a life of purity and integrity.

The white froth of the girl’s ball gown anticipates the future poof of her wedding, where the same father will pass his virginal daughter over to her new owner and protector, her husband. (I imagine a fist bump between the patriarchs after the ceremony: “Kept that hymen intact for you, son.”)

The father passes his virginal daughter over to her new protector. I imagine a fist bump between the patriarchs: “Kept that hymen intact for you, son.”

Purity balls are the ritual high feasts of America’s government-subsidized abstinence industry, in which a whole nation of dads, including our presidents, obsess over the ins and outs of their daughters’ sexual organs. Under George W. Bush’s “Faith-Based Initiative,” a purity-ring company called the Silver Ring Thing received $1 million in grant money. In 2015, Congress re-upped funding for an abstinence-only sex education program for school kids and welfare recipients, adding an extra $25 million per year.

Studies have shown that pledges of chastity do not keep teenagers from experimenting sexually; nor do abstinence-only sex education, father-daughter dances, or cheap silver rings reminding girls they are #waiting (only $20 each, plus $4.50 for shipping and handling). The most prominent celebrities to don purity rings, the formerly hyper-Christian Jessica Simpson and Miley Cyrus, have since wriggled out from under their domineering fathers, who managed not only their daughters’ virginal images, but also their multimillion-dollar careers.

When the American daddy dangles a chastity belt in front of his daughter, it is in his role as head of the household, God’s representative in the family. But sexual purity is a patriarchal notion that has been mistaken for a Christian one—just another of those “it would be really convenient for me and the passing down of property and wealth to male generations if it turned out the Scripture said this was for the best” things, right up there with the twelfth-century invention of the idea that God hates gays.

The idea of sexual purity was a relatively late addition to Christian doctrine. Not even priests needed to be celibate until the twelfth century—and that change, according to Medieval historian R. I. Moore, had more to do with blocking church officials from transferring church wealth to their families than it did with forging any sort of resemblance between the lives of priests and how Jesus lived.

In the foundational years of Christianity, the sexual purity of women was of no great concern. An unmarried girl’s sexual activity was seen, according to historian of early Christianity Peter Brown, as “simply a bad omen for her future conduct.” A sexually active teen might grow up to be a wife who took lovers, not that that was such a bad thing either. The goal of marriage was not a sacred union of souls, but reproduction—needed to replenish the constantly keeling-over population at a time when the average lifespan was twenty-five years.

For a woman to take a vow of abstinence, then, was considered radical. St. Cecilia was a buzzkill at her own engagement party, wearing sackcloth and ashes. When Thecla left her fiancé to don men’s clothing and preach alongside Paul the Apostle, the rejected suitor complained that this denigration of marriage was “bizarre and disruptive to the human race.” It was certainly disruptive to families. Early women of the church had to fight their fathers to take their vows, and they fended off prospective suitors by making themselves repulsive: shaving their heads, scarring their faces, cutting out their own eyes.

A woman’s pledge of virginity in those days was a way to subvert the patriarchy, not acquiesce to it. Rather than being passed along like a brood cow from father to husband, one would denounce not sexuality so much as motherhood (or remarriage after widowhood) and find solace in the church. A vow of chastity allowed women to become writers, philosophers, composers, artists, and diplomats, which would have been tricky for someone constantly either pregnant or nursing. These chaste women may have had to marry Christ, but a neglectful and absent (i.e., fictional) husband is better than a husband who is around all the time, even if he’s one of the well-meaning ones.