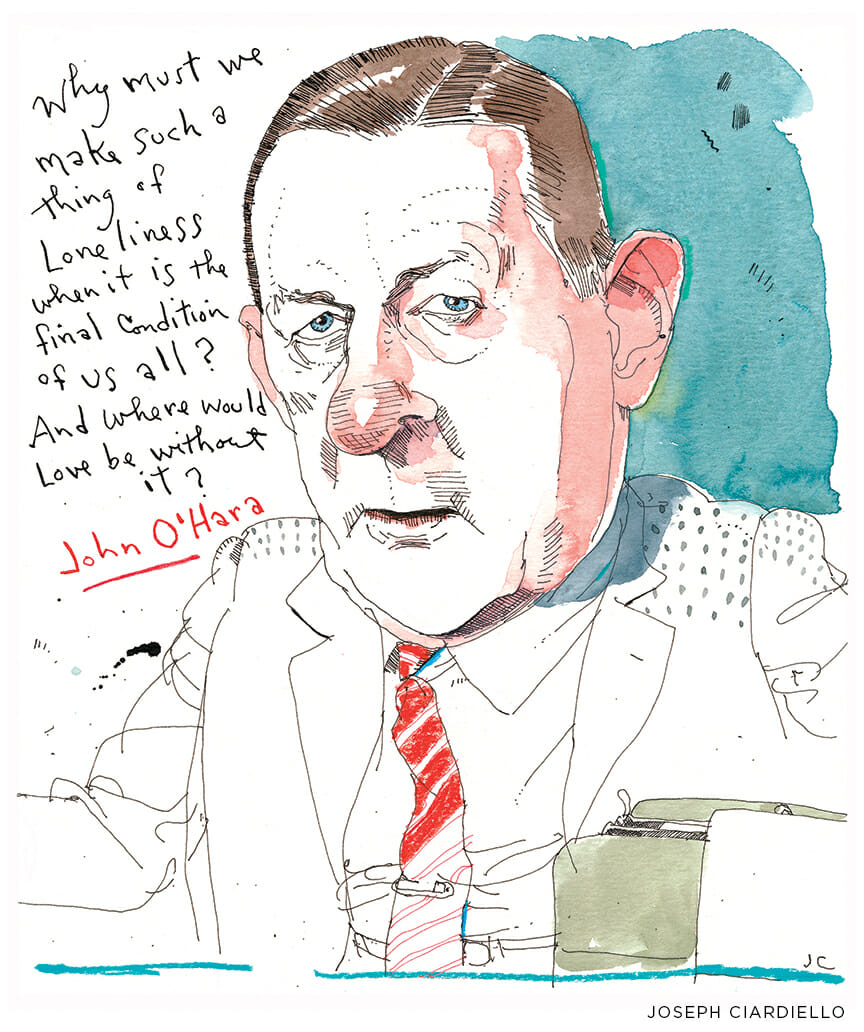 John O’Hara’s themes are alcoholism, infidelity, rape, perversion, child molestation, the yearning for power and financial security (many who knew the author believed this to be his own basic preoccupation), the instability of love and passion, the effects of economic substructures on the superstructures of private life (in method, if certainly not in ideology, he resembles a Marxist), boardroom and statehouse politics, and the secret corruptions of families. In many respects he is a cruel writer; not only does he portray quotidian cruelty unblinkingly and intimately, but his portrayals themselves can be cruel. While critics often prefer his short stories to his novels, my preference is the reverse of theirs. For me, a writer’s highest business is the creation of some kind of empathy, and O’Hara’s short stories rarely permit him to do more than cast his contemptuously bloodshot gaze on a situation, evoking revulsion or pity, perhaps, but nothing more.

To be sure, in the stories you will find any number of strange types, such as the sprightly, obese, sexually deviant, not unsympathetic dancer-actor-clown of “The Portly Gentleman,” or the vicious, stupid, smalltime gangsters of “The Sun-Dodgers,” usually encountered at some revealing and decisive moment. A few of these tales—I’m thinking of the bitter brilliance of “It’s Mental Work” or the cheap perversions and double-crosses of “A Phase of Life”—are as effective as the best of Ernest Hemingway or Raymond Carver. Yet it is only in the novels that O’Hara takes a longer look at his strange characters, showing them in the grip of corrosive social crosscurrents.

Like most cynics, O’Hara wishes things were different, and he sometimes conveys extreme compassion for the poor, lost, and lonely. But an O’Hara narrative is typically one of failure. “Of course life is not made up of many good things; at least we don’t make milestones out of the good things as much as we do the bad,” says the narrator of BUtterfield 8 (1935), O’Hara’s second novel. The details vary from one case to another, but it’s always essentially the same trajectory. After reading one or two O’Hara books, we can guess how things will turn out.

Imagine a man in the driver’s seat of whichever automobile best represents his time and class (count on O’Hara to know the model). Imagine that this driver is on a highway, cruising or speeding toward ruin. On either side, in place of billboards, lurid personages appear, and sometimes reappear some miles down the road. Other billboard-like elements are O’Hara’s numerous curious facts and aphorisms: “It is a pretty good hangover when you look at yourself in the mirror and can see nothing above the bridge of your nose”; “Women who like golf and play it well do seem to move more deliberately than, say, women who play good tennis”; “The anthracite region, unlike the bituminous, is a stronghold of union labor.” Then these assertions likewise wink out of the rearview mirror, and the driver continues on toward destruction. Why this doom is inevitable is the big question.

Because O’Hara can bring alive not only his protagonists but also their foils, antagonists, mentors, dependents, and sometimes even those billboard-like minor characters on the road to failure, his protagonists’ failures are complex in both cause and implication. A common O’Haran female type is Caroline in Appointment in Samarra (1934), the most sympathetic character in the novel, but one who runs up against what she lacks: “There was something wrong and incomplete in her relations with all the men she had liked best and loved. . . . Altogether she was contemptuous of the men she had known.”

While poisoned intimacies past and present bear heavily upon his books’ outcomes, O’Hara is especially interested in alienation from society, and it is in the delineation and dissection of rank, class, and ethnicity that he truly excels. The reader may count on learning exactly to which clubs and societies a central male character belongs. Here is a typical passage of scene-setting, from Ten North Frederick (1955): “But even in 1909 there was one marked difference between the people who remained on Frederick and South Main, and the people who lived on Lantanego: it was the difference that no one coming up in the town’s business and social life was moving to Frederick and South Main.” Among the worst punishments “society” can deal its members is exclusion from some highfalutin organization or event. As one vindictive woman remarks to another, regarding a third who scolded their children: “Oh, I can see to it that they don’t get an invitation.” And once this plan has been carried out, the uninvited family promptly finds that “their social indispensability was at an end.”

The punishment of exclusion from a class is but one of many acts of social aggression in O’Hara’s America. Class privilege frequently gets enacted against the lower orders, and many characters are bigots in one way or another. Appointment in Samarra opens (on Christmas morning, after a scene of marital lovemaking) with the wife casting hateful thoughts at the next-door neighbors because Jews “hurt real estate values.” Gloria, the heroine of BUtterfield 8, at one point yells at her mother’s servant: “Goddamn you, you black bitch!”

Privilege also enables oppression within an economic or social class. Ten North Frederick fixes on the codes that sanction this kind of oppression: “Under the unwritten rules of the time, Ben could have beaten and raped his wife with impunity; the screams of violently abused women were heard not only in the poorer districts of the town, where, to be sure, they were heard more frequently.” For O’Hara, there’s no escaping class: “You’re money-conscious because you have it, and I am because I haven’t.” Or as Caroline’s husband Julian says in Appointment in Samarra, “I always think of the ones that really have more money than I’d know what to do with, I think of them as the democratic ones. If you don’t have money you’re not democratic.”

Society, as O’Hara sees it, is poisoned by class relations. To be sure, class is only one cause of life failure. A reader of O’Hara’s books will often find an existential or perhaps Chekhovian isolation presenting itself as the fundamental human situation. At the end of a longish short story (“We’re Friends Again”), the narrator asks, “Why must we make such a thing of loneliness when it is the final condition of us all? And where would love be without it?” But this loneliness is frequently a cause or effect of people’s wickedness, which in turn tends to get expressed sociopolitically.

The New York City of BUtterfield 8 and the fictional Gibbsville, Pennsylvania, of O’Hara’s other major novels are not exactly places that inspire idealism. Consider the corruptions of Ten North Frederick. There’s the judge who says, “I kill when I send a man to the electric chair, and I knew I was going to do it when I ran for judge. Yes, I have a pretty low opinion of my fellow man. He’s as evil as I am.” Then there is the man who “had himself elected to the boards of directors of the Valley Water Company and the Valley Telephone Company,” not to mention the man who alters a zoning law in order to allow one of his tenants to “install noisy carpet-cleaning machinery,” which drives the housewives so crazy that they make their husbands move away and sell their properties cheaply, leaving the puppet master to buy them up and then flip them at a profit to the owner of an extremely loud planing-mill; of course this fellow becomes mayor. As a habitual liar explains to the liar whom she is hoping to marry, “Mind you, I don’t like to be a liar, but in this rat-race that I been in for the past seventy-five years, I never knew anybody that wasn’t a liar.” In the short stories, such dishonesty, cowardice, and selfishness may play themselves out on a purely personal level, but in the novels, they are mediated through social rules and hierarchies.

In a social system of corrupters, exploiters, and worse, there is little reason for someone not to fail—unless he or she is corrupt to the core. I suspect that this trumps existential loneliness as the real reason that O’Hara’s protagonists do not achieve their goals: they are tainted by residual decency.