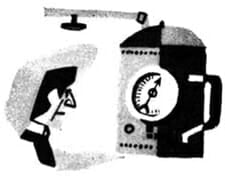 The best song of the last quarter-century is “Iolanthe” by James McMurtry, but it’s a version only I’ve heard. In the summer of 1995, when McMurtry’s album Where’d You Hide the Body? was released, I received a promotional cassette copy at the Topeka Capital Journal. I wasn’t familiar with James McMurtry—or, for that matter, with his Pulitzer Prize-winning novelist father, Larry—but it was a tape with simply a guy’s name on it, and tapes with simply guys’ names on them were most of what I was listening to at the time, so I decided to give it a chance. I dropped it into a plastic cassette organizer on the floor of my car and forgot about it.

Then one July day I left all my car’s windows rolled up and the organizer on the dashboard. Like a big magnifying glass, the windshield trained the sun on my cassettes and reduced them to a treacly mess. A column describing the accident was probably the best-received piece I ever wrote for the paper:

I couldn’t believe it when I saw it: a big, wavy, bubbly s’more of music. Names and titles were warped but not beyond recognition. The artists formerly known as Bob Dylan, Big Head Todd and Bela Fleck were stuck together—unwilling participants in an improbable supergroup.

And he got along better with the hired help / than he did with you.

The McMurtry tape’s case was sufficiently bent that it wouldn’t open normally or close completely. The cassette itself looked languid, but for some reason it had sustained little enough internal damage that when I finally played it one day while driving to lunch, it sounded fine. And then it sounded incredible. The first song, “Iolanthe,” began with a strange, dragging beat that initially put me off, and McMurtry’s voice—parts Lou Reed, David Byrne, and Warren Zevon—was a curiosity. By the time the song was over, though, I knew I would be driving thru. For forty-five minutes I doubled down the same residential streets, rewinding and replaying it.

The instrumentation was spare in the beginning—an acoustic guitar and that plodding snare beat. But the second-person vocal narrative, with its obsessive a/a/b, c/c/b rhyme pattern, intrigued me:

Your mother used to take the cure. / She kept plastic on the furniture / in the living room. / You used to tell your friends / if you never saw that place again / it would be too soon. / But your college beau didn’t seem so bad. / You brought him home to Mom and Dad / like you’re supposed to do. / And he wouldn’t account for himself. / And he got along better with the hired help / than he did with you.

Don’t sweat the losses. Let ’em go. / Toss ’em on out where the tall grass grows. / We’re all bound to get our share, / Iolanthe.

McMurtry’s delivery was at once raconteurish and resigned—and as for resignation, what about those last two lines? He’d worked all that time to preserve an unorthodox and difficult rhyme scheme only to conclude by chucking it, by deliberately frustrating any expectation of closure. Ignore the disappointed rhyme, though, and you’re left with words of familiarity and comfort.

The song continued treading this line between cynicism and solace. Its rhythmic persistence was offset by the growing complexity of its arrangement. The bridge between its third and fourth verses was a spectacular instrumental confluence, full of swelling and receding organ and steel guitar. And after the final refrain, just as the song’s desultory flourishes were about to overwhelm me, a tuba, for God’s sake, came in with a simple seven-note progression, repeated it, repeated it again, cynicism yielded to solace, or in any event both yielded to the inevitability of moving on, and the tuba-prodded song went marching away.

I saw an interview with McMurtry in the “alternative country” magazine No Depression, which was timed roughly to coincide with the release of his album It Had to Happen. Prefacing the conversation, the interviewer provided some background on McMurtry: He asserted that It Had to Happen was a more fully realized album than its three predecessors (he mentioned Where’d You Hide the Body? by name) because McMurtry had finally given his songwriting some elbow room; he was no longer hyperextending himself with elaborate arrangements.

This depressed me because the arrangements I hear on my CD copy of Where’d You Hide the Body?—the arrangements McMurtry actually presented to the public—sound considerably less elaborate than those on my half-cooked promotional cassette. The Hammond, the pedal steel, the harmony and backing vocals, even the tuba and vibraphone (yes, there’s a vibraphone) seem shunted to the far background. It’s possible that McMurtry, while “mixing” or “mastering” or doing some thing else removed by several steps from actual performance, opted for an instrumental paring down because of homogenizing pressure from his folk/country colleagues. The result was a more austere final draft of Where’d You Hide the Body?, though still too cluttered for at least one critic.

But I have another theory, and I’m prepared to cling to it against reason. Anyone with a lab coat can tell you that the world refines itself through arbitrary collision, and that accidents are the stuff of discovery. Nothing lived, nor was anything dead because nothing had ever lived, when a lightning bolt awakened the lake of incipient cells that became our ancestors. We know that we owe the telephone to a spilled glass of water. I believe that the intense heat to which I subjected that cassette was what perfected “Iolanthe’s” arrangement. Like a stew whose ingredients can only be brought into conversation with one another by hours of stewing, the song, its various instrumental constituents, needed a chance to simmer. In the CD version, the pedal steel is an ambulance that never gets within half a mile of the studio; the tuba is a basset hound one of the musicians brought, woofing on the other side of a closed door; the vibraphone is a series of ideas McMurtry entertains but never mentions. On my cassette, those instruments were right there in the room, and they all had the floor.

I wince at those preterites—“were,” “had.” The cassette no longer works. It performed nobly for about a year, but I suspect it had never fully recovered from its magnifying. The songs began to sound sluggish. After a while, my car’s stereo would mistake the resistance it was feeling for the end of a side and start auto-reversing in perpetuity. At home, my shelf system wouldn’t even accept the warped thing. It was the end of “Iolanthe” as I had known it.

Think, this summer forty years ago in Queens,

Lenny Tristano’s quartet was in the Sing Song Room

of the Confucius Restaurant, playing Mean to Me

They’ve played it every night for weeks,

but tonight, when Konitz finishes his solo

and Lenny digs back in, just then,

the hair stands up on everyone’s neck

while the bass feeds him lines he tears into bits.

The tape machine is on the blink that set,

escape through the exhaust fan and into the night,

rising along with the car horns and shrieks

until a breeze takes hold and carries them south

over Brooklyn and the lights of Ebbets Field

out to Sheepshead Bay and Rockaway Beach,

swirling awhile then heading off to sea.

Those stanzas belong to a piece generously titled “For Ann, Whose Studio Burnt to the Ground In the Big Futon Factory Fire Across the Freeway From the Coliseum.” It opens at twenty thousand feet, where ashes from the cremated paintings have created their own stratum of atmosphere. Kleinzahler offers his Sing Song anecdote as solace to the blighted artist, Ann: her “ellipsoids on canvas” rising to join the musicians’ brilliant lost dialogue in darkness and thin air.

All great art is fleeting; transience might be the flaw that stands between the greatest art and perfection. Like Heraclitus’s river, it moves on. One person remembers a singular live performance, in which the music seemed to issue from another authority than the musicians. For someone else, a record affords that experience. But it’s an early listening, a second or third, when what Philip Larkin called “that hidden freshness” sings clarion, when the tension between familiarity and surprise is tightest, when the song has declared its eloquent theme yet still seems to withhold something vital. That exhilaration can never be revisited, though the record itself might survive another fifty summers. Everyone has a favorite song, and no one hears it more than once.

That’s cynicism, of course, but my experience has borne it out. Even before it gave up, the McMurtry cassette was giving me diminishing returns. I played it every day, coursing along Highway 40 on my way to work. And like Highway 40, it ceased to surprise me after a while. Now I loan the CD to friends. I let some time go by between playings. I let myself forget the little instrumental blips, some of the less likely longer passages, the notes McMurtry and his buddies surprised themselves by playing. When I feed it to my finicky shelf system for the first time in a few months, I sometimes find that I’ve remembered how to listen to it, how not to listen past it. The arrangements always seem understated, incomplete, but the lyrics are no less eloquent than when I heard them for the first time: “We’re all bound to get our share.” There’s the solace.