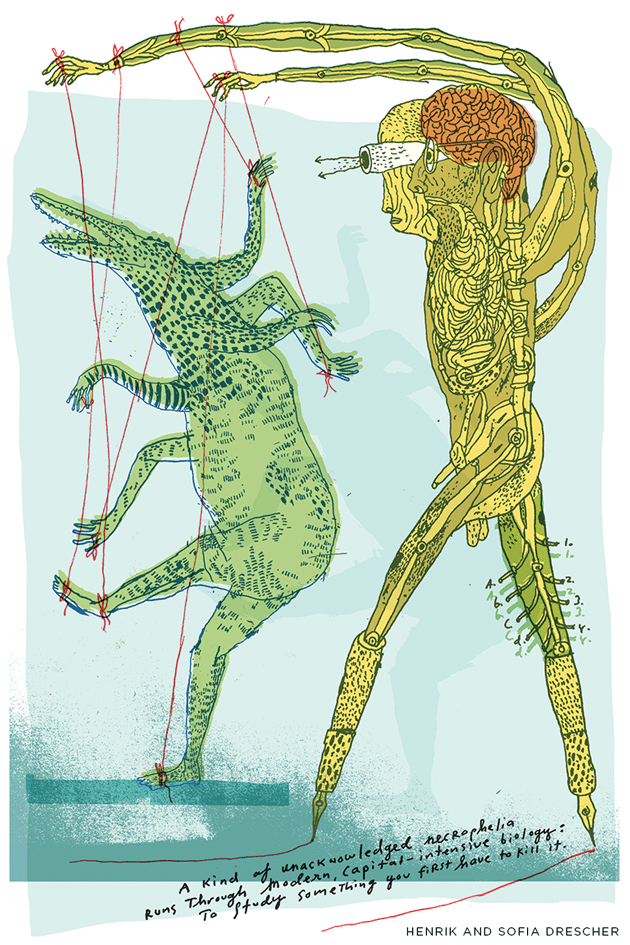 Rationalists tend to frown upon group activities that seem to serve no evident biological or political purpose, like the drumming and masking so often indulged in by protest movements like Occupy Wall Street. Or, for a more historically venerable example, consider the reaction of European conquerors and missionaries to the shocking spectacles they encountered during the “age of exploration.” Almost everywhere they went—from Africa to the Western plains of America, from Polynesia to the Indian subcontinent—Europeans came across native peoples engaged in ecstatic rituals involving dancing, drumming, body-painting, masks, costumes, and feasting. Failing to notice the parallels between these exuberant native rituals and the traditional carnivals of Europe, missionaries tended to explain them as outbreaks of demonic possession, or as proof that the natives were not human at all, only “savages.”

Later, twentieth-century anthropologists bewailed the apparent waste of energy and resources represented by these ubiquitous practices, and not just the excesses of calorically profligate dances. Painstaking preparation went into the design of costumes and masks, the invention of new tunes and dance steps, the production of favorite foods—all representing sunk opportunity costs, in this zero-sum view: energies that might have been more rationally expended on hunting, gathering, or horticulture. There had to be some purpose, or at least some function, for these costly and economically nonproductive rituals, and anthropologists soon hit on the notion that they were required for “social cohesion.” Obviously, doing something together, something that was fun and sometimes ecstatic to the point of trance, deepens the ties among individuals, perhaps facilitating productive collective enterprises, such as agriculture or defense. This was fine, from the anthropological point of view, as long as the festivities remained “liminal,” as in Victor Turner’s judgment, or peripheral to a society’s more serious undertakings.

But social cohesion is hardly served by the more agonistic elements of traditional festivities. Even in the most peaceable, homogeneous cultures, there may be competition over dance steps and bodily decoration, as well as sexual rivalries and attempts to settle old scores. In the steeply class-divided towns of early modern Europe, carnivals and other festivities easily tipped over into rebellions against the local aristocracy, and while rebellions may represent social progress, they do not exactly represent “cohesion.” In the Caribbean, slaves seized on carnival as an occasion for uprisings, which is one reason colonialists came to fear the sound of drums. When I attended the 2008 carnival in Trinidad, I saw plenty of convivial dancing, singing, costuming, and play-acting, but the blowout also ended with a body count of five, along with twenty wounded in shootings, stabbings, or beatings.

So maybe carnival and ecstatic rituals serve no rational purpose and have no single sociological “function.” They are just something that people do, and, judging from Neolithic rock art depicting circle and line dances, they are something that people have done for thousands of years. The best category for such undertakings may be play, or exertion for the sheer pleasure of it. If that’s the case, then we have to ask why it has been so difficult for observers, especially perhaps white bourgeois Europeans, to recognize play as a time-honored category of experience.

Even in the most peaceable, homogeneous cultures, there may be competition over dance steps.

Some critics (such as David Graeber in this issue of The Baffler) place the blame on laissez-faire economic theory, which postulates a Homo economicus whose actions are calculated to result in maximal individual advantage—a notion that, Graeber suggests, infiltrated science through Darwinism. From an economic perspective, the carnival celebrant is as misguided as the inchworm leaping apparently aimlessly from stalk to stalk; each of them should be more productively engaged—gathering food, or sharpening weapons, or finding mates. But I would say that the roots of our short-sightedness about play range far beyond economics, that they extend into all of Western science, and that what is at stake here is ultimately even deeper than play.

For the last few hundred years, Western science has been on a mission to crush all forms of agency, which I mean in the philosophical sense as the capacity for action. Scientists never allowed that hydrogen atoms might lust after oxygen atoms or that living creatures might swim and run and fly for the fun of it. The goal of science was always to replace agency—or whim or desire—with deterministic mechanisms: Atoms were compelled to unite by their configurations of electrons. Birds flew to find food or escape from predators, and the ones that failed to do so were eliminated by natural selection. Whatever moved or flew or otherwise acted was itself inert, acting only in obedience to unseen forces or the “laws of nature,” although the source of these laws was never explained. Animals, as Descartes and generations of scientists insisted, were machines for consumption and reproduction, and humans, especially those of “inferior” class and races, were not much better.

I was educated in this scientific tradition, ending up in cell biology, which proposed that you cannot understand, say, the flight of a hummingbird until you have killed the bird, cut its wing muscles into slices a few microns thick, and subjected them to electron microscopy. Thus, a kind of unacknowledged necrophilia runs through modern, capital-intensive biology: to study something you first have to kill it. You know you have “understood” it when you arrive at a theoretical description that contains no hint of agency—just a series of mechanisms involving organelles, which you have isolated through high-speed centrifugation, and molecules, identified by a series of fractionation processes. The hummingbird’s speed and grace is explained by the density of mitochondria in its wing muscles, leading to an abundant flow of ATP to the myosin. Similarly, maybe the inchworm’s dance will eventually yield to the dissector’s knife, banishing all notions of play or agency or will.

As for humans, individual scientists usually hedge on the subject of whether humans possess free will, but the long-term trend has been to extinguish it to an occasional flicker. Twentieth-century psychology, for example, postulated that humans act in response to instincts, like animals, or that they are driven by “drives.” Economics, if it can be called a science, sees human action springing from rational calculations that are performed to fulfill biological needs, which themselves arise from the buzz of atoms and the jostling of macromolecules. No one, then, is free. Everything happens “for a reason” as part of some vast, insensate, cosmic mechanism. Insofar as human consciousness survives the gaze of mechanistic biology, it is a solitary beacon in an otherwise dead world. As the great molecular biologist Jacques Monod observed, as if surveying the wreckage: “Man at last knows he is alone in the unfeeling immensity of the universe.”

But science itself has been changing, and not because of any philosophical unease about the paradox of “man’s” existence in an otherwise dead world. It was simply overwhelmed by new empirical evidence, starting with studies of the photoelectric effect that led, in the early twentieth century, to quantum mechanics and the shocking realization that electrons move as if by chance or, to risk the dread charge of anthropomorphism, by choice. Then came, late in the twentieth century, the equally paradigm-challenging formulations of nonlinear dynamics—or, as it is more sensationally termed, chaos theory. Put simply, very small differences in starting conditions can lead to huge differences in effects, which is why, among other things, we cannot hope to predict the weather with total confidence. Biological systems also turn out to be mathematically nonlinear, often better described by algorithms than by static (and effectively deterministic) equations. It turns out that patterns can arise out of muddle; microscopic events can synchronize to produce macroscopic effects.

On a less theoretical level, science finally seems to be coming around to acknowledging the existence of nonhuman agency, at least in the case of nonhuman animals. Here, too, the empirical evidence is decisive: despite our Cartesian brainwashing, we can all observe that animals do not always perform according to mechanistic expectations—that, among other things, they play. In the last few decades, claims that animals possess consciousness, emotions, and intelligence have ceased to be heretical. Ethologists have found nonhuman animals using tools, developing local cultures, and even producing art. But we have yet to hear a retraction or, better yet, an apology, from the biologists who for so long declared them to be unthinking things.

Agency, in some form, is everywhere, from inchworms to electrons.

However grudgingly, the scientific worldview has been re-animated, which is not to say re-“enchanted.” No gods or spirits, no vitalistic forces, are required to explain this pulsating, ever-surprising universe, which seethes with activity at the smallest level and, through a mere quantum fluctuation, may be able to bud off an entirely new baby universe. Agency, in some form, is everywhere, from inchworms to electrons, and it is time for science to recognize that everything is, if only in some metaphorical sense, alive. Science and rationality must not give way before this new view of reality and slouch off the stage. We have to engage with it, keep watching and probing and trying to understand it. For some of us, that enterprise, a.k.a. science, remains one of the most compelling forms of play we can engage in.

Is there a “play principle at the basis of all physical reality,” as Graeber so daringly suggests? I am drawn to this idea as a metaphysical speculation, so long as we remember that play has no moral valence. It can be elegant, it can be rough, it can be deadly—or all those things at once. But if we want a category of activity that embraces both subatomic particles and carnival goers, then we may as well call it play. And if we want to know what God is doing, should there be such an entity, and why he (or she or it) is doing all this, our best guess is that he is playing.