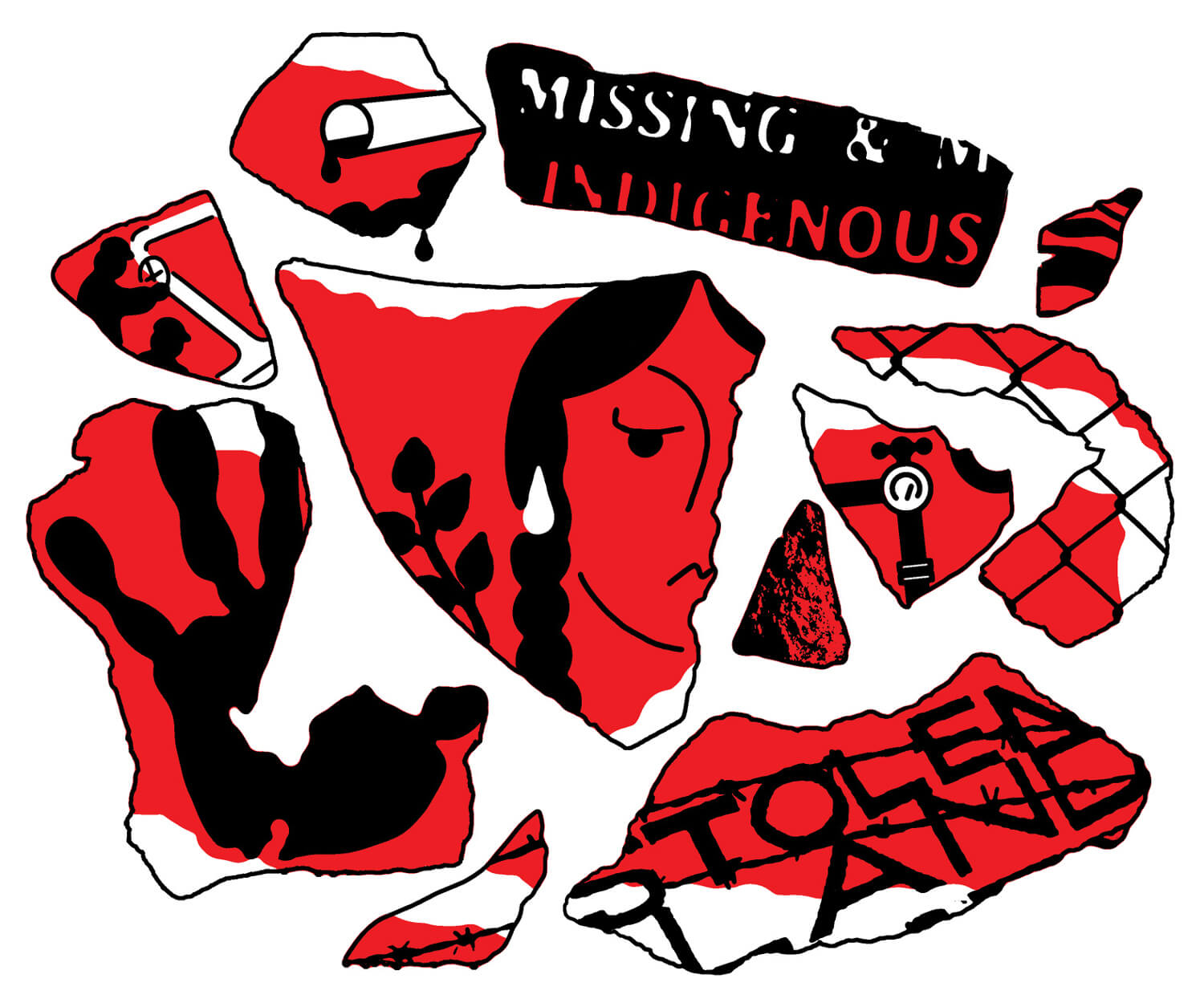 In 2016, over two hundred organizations signed on in support of a congressional resolution to establish May 5 as National Day of Awareness for Missing and Murdered Native Women and Girls (MMIWG). Long ignored—the need for an acronym itself is telling—the issue has belatedly risen to prominence in the United States and Canada this past decade, thanks largely to the efforts of grassroots Native women organizers. On May 4 of this year, as if notified just in time, President Joe Biden officially declared the next day Missing and Murdered Indigenous Persons (MMIP) Awareness Day.

The proclamation came less than five weeks after Interior Secretary Deb Haaland announced a new Missing and Murdered Unit (MMU) within the Bureau of Indian Affairs Office of Justice Services. It was widely heralded as a positive development in U.S.–Native relations, a good omen for the years ahead. But Biden has a mixed track record when it comes to Native people. He backs the Line 3 pipeline that passes through Minnesota, despite widespread Indigenous opposition. Over the last decade, the fervor about MMIWG has been matched only by the intensity of Indigenous organizing to protect water and land from extractive industries. Why would Biden support one but not the other?

The answer lies in the language of the MMIP proclamation. Biden calls MMIP a “tragedy” that stems “from a long history of broken promises, oppression, and trauma.” Lamenting that “for too long, there has been too much sorrow and worry” for the families of victims, he pledges to unite various tribal, federal, and law enforcement agencies to promote “healthy, safe communities” once and for all. This language mimics that of Executive Order 13898, which former President Donald Trump issued in November 2019 to establish Operation Lady Justice (OLJ), a Presidential Task Force on Missing and Murdered American Indians and Alaska Natives. Trump stated that the task force should develop “a public-awareness campaign to educate both rural and urban communities about the needs of affected families.” It prescribed “maximally cooperative, trauma-informed responses to cases involving missing and murdered American Indians and Alaska Natives.”

Neither Biden’s nor Trump’s statement mentions what might be causing the mass murder of Indigenous people, namely ongoing colonization. By invoking the language of injury—tragedy, trauma, sorrow—the state can acknowledge the high rates of violence against Native people without addressing its underlying structural causes.

The two proclamations are symptomatic of what scholars describe as the therapeutic turn in neoliberal state power. As Athabascan feminist Dian Million and others have shown, in the aftermath of World War II, techniques of governance and domination in North America were redirected toward individual self-management. Where intervention was once done in the name of security and development, the state now spoke of the need of reforming subjects, who were suffering from various “failures of will” and in need of self-care. In Therapeutic Nations: Healing in an Age of Indigenous Human Rights, Million charts how this development in turn gave rise to a trauma-informed Indigenous politics, in which the alchemy of self-help became a pre-requisite for demands for decolonization and self-determination.

The rise of trauma as a discourse in Indigenous politics can be traced back to the late 1960s, when projects deploying “human potential techniques” first arrived in Indian Country. By the 1980s, they had also proliferated across Canada under the guise of “community development.” These projects are predicated on the idea there are cultural or psychological causes that keep certain communities mired in poverty. They might involve, say, counselors and other development gurus, who are sent to reservations to help Indigenous people work through unresolved trauma. In effect, therapeutic theories of individualism provided a cunning mechanism to offload state responsibility for care onto individuals themselves, even as neoliberal austerity measures created staggering economic and social inequalities and brought despair to millions.

These community development initiatives had roots in state-run programs from earlier decades, when, after the passage of the Indian Reorganization Act in 1934, Native people were recruited to live in planned communities to save them from poverty. In the Navajo Nation, for example, a federally sponsored “experimental agricultural community” called the Fruitland Irrigation Project (FIP) was established in Fruitland, New Mexico, in 1937. The still-existing project was set up in the wake of a “failure” to increase Navajo standards of living according to criteria set forth by Congress in previous decades. Such projects tested and perfected strategies to Americanize Native people by using the language of human potential to promote development.

From the 1970s onwards, trauma was also taken up to promote a different political project altogether: one seeking justice for the violence perpetrated by the state against racialized groups. Post-traumatic stress disorder, or PTSD, trauma theory’s touchstone concept, was accepted by the American Psychiatric Association only in 1980, after years of advocacy by Vietnam War veterans’ groups, women’s rights advocates, and Holocaust survivors. They sought to shine a light on a form of suffering that had been kept away from the public sphere, considered so horrific that it defied language. This paralleled a movement to recognize incest and rape, which were long considered private family matters, not even forms of violence. By the 1990s, Indigenous people were using PTSD to leverage human rights demands in the international arena.

The hard-won incorporation of these demands into mainstream political discourse gave trauma purchase in new social movements. Most commonly, these movements sought justice through formal legal channels, creating what Wendy Brown calls “the contemporary proliferation of efforts to pursue legal redress for injuries related to social subordination by marked attributes or behaviors: race, sexuality, and so forth.” Gains were made in areas like hate crime legislation, but the state remained recalcitrant elsewhere, continuing its austerity policies and inflating carceral institutions. In response, movements took the discourse of trauma beyond the state to civil society, creating a larger ecology of recognition, where social and political injury could be neither ignored nor denied.

Literature, performance, street art, and memorialization practices were central to this transformation. “The denigrated and the degraded,” Maurice Stevens argues, had to “create histories that feature themselves and their loved ones as vindicated whole beings who possess the stuff of historical merit . . . [in] the absence of this kind of confrontation in traditionally authorized settings” like universities, state archives, and capitol halls. Indigenous street actions held to change Columbus Day to Indigenous Peoples’ Day are themselves a type of performance and memorialization that display the stunning art of protest to contest colonial stereotypes. Two other major flashpoints of recent Indigenous political movements have been focused on visual representation—the toppling of colonizer statues and the retiring of racist sports mascots.

Identity is tricky because it presumes the individual as the primary unit of politics. Such an approach threatens to reduce demands like decolonization and national liberation to matters of personal wellbeing and self-care. However, I believe a subtler—and more troubling—phenomenon has developed with the prevalence of injury-based identity politics. This is the rise of what Roger Luckhurst, among others, has described as “The Survivor,” an archetypal figure who possesses an almost supernatural quality to overcome the devastation of trauma. Originally discussed in the context of the Holocaust and the atomic bombings of Hiroshima and Nagasaki, The Survivor of sexual assault and harassment is now a ubiquitous figure, so much so that even I do not question the language of survivorship—or the veracity attached to it—as a matter of political principle. Yet the rise of The Survivor also signals the moral triumph of trauma as a signifier with special discursive weight. It signals that the possession of injury-based identities has become not only viable but also desirable, a form of human capital.

By invoking the language of injury—tragedy, trauma, sorrow—the state can acknowledge the high rates of violence against Native people without addressing its underlying structural causes.

Today, to question (or fail to recognize) someone’s injury can be seen as an extreme violation, evidence of bad politics or, worse, moral deficiency. As Elizabeth Povinelli and others have shown, trauma can be used for any number of dispersed and competing political experiments, including those aligned with state power. The tokenization of minority identities, often associated with the incorporation of affirmative action and other diversity initiatives in hiring and admissions policies, is the most obvious example of this tendency. But Biden and Trump’s resolutions on MMIP reveal how great the stakes are.

It is now considered legitimate for an individual from any social location to demand recognition of injury. The contemporary “White Lives Matter” movement, which includes calls to recognize the suffering of white “incels,” is a prominent example of this logic. Pessimistic iterations of the demand for recognition now infuse even progressive injury-based politics, casting aside the pursuit of healing and justice, instead focusing on the elucidation of suffering itself. Certain strands of Afropessimism come to mind here, most notably the popular writings of Frank B. Wilderson III. As critic Vinson Cunningham has pointed out, Wilderson’s work tends to view Blackness (and anti-Blackness) as a “fixity,” a “hole,” that is “everywhere and always the same.”

While we cannot deny the twin power of recognition and injury, I do think we should question the way it is deployed today. Yes, recognizing another’s pain can lead to profound acts of solidarity and ignite powerful movements. When not opportunistically employed by political elites or racists, suffering itself deserves our attention, compassion, and swift action. However, it is important to think critically about how our suffering is turned into something called “trauma.”

One of liberalism’s greatest tricks has been convincing individuals of the need to perform their trauma, thereby narrowing the horizon of politics to self-regulated individualism. While it is relatively easy to pinpoint disingenuous state overtures to trauma, it is much harder to place under the magnifying glass our own role in perpetuating trauma politics. That said, it is not necessarily our individual responsibility to correct this tendency. Rather, we might take a page out of the MMIWG origin story. As Million reminds us, the Native women who founded the contemporary MMIWG movement were not seeking facile recognition when they organized to end gender and sexual violence. Healing for these women could only happen if Indigenous relations with the land were restored through structural decolonization and the reinstatement of Indigenous political autonomy. They sustained an uncompromising vision of freedom, and so should we.