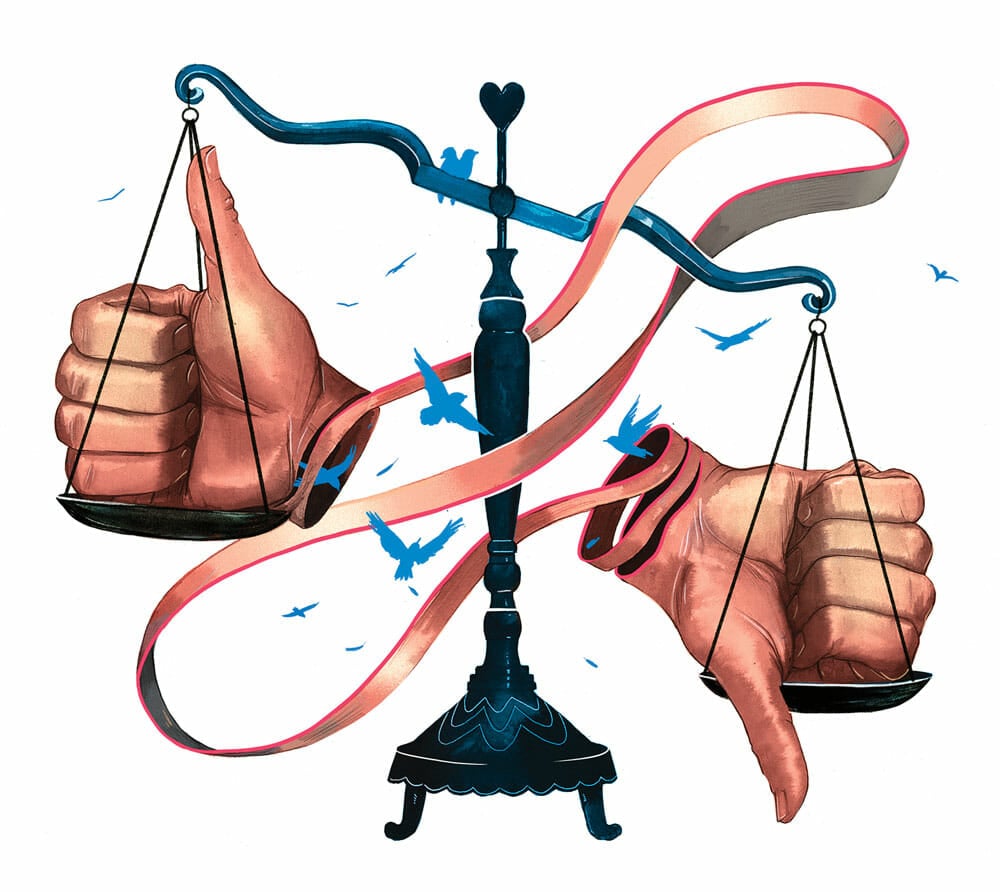 Relying on digital media to further one’s knowledge of politics is, by all accounts, a risky proposition; yet the spectacle of being schooled in real time can prove irresistible. As Howard Schultz announced his potential presidential candidacy, the Starbucks billionaire predictably turned to the largest micro-blogging platform in the English-speaking world to amplify his message. “It feels good to be here. My hope is to share my truth, listen to yours, build trust, and focus on things that can make us better,” he began; a few hours later, Schultz added that “I love our country, and I am seriously considering running for president as a centrist independent.” The replies these tweets received were overwhelmingly negative. In both cases they exceeded the likes received by an enormous margin: 11,000 replies to 7,800 likes and 45,000 replies to 24,000 likes, respectively and roughly speaking.

Schultz, or at least the staff he paid to operate on his behalf, was hardly the first to discover what it means to be deeply unpopular online. All the same, @HowardSchultz entered a field defined by what has become commonly known, on Twitter, as “the ratio”: replies outnumbered likes on all of its first nine tweets, an occasion without apparent precedent. Any tweet or any user may get hit with a bad ratio; being “ratioed” is an emergent property of any platform whose functions permit the numerical gauging of both approbation and opprobrium. Yet the billionaire’s astonishing nine-peat underlined a general trend regarding the ratio, that it serves as a means—one rare if not entirely absent elsewhere in civic society—of calling powerful, prominent, establishment-aligned figures to public account for their obtuse entitlement.

The growth of the ratio seems heartening, a sign that the popular voice still has value in a political economy commanded by careless, unaccountable, and deeply lame elites.

When the right-wing journalist Eddie Scarry posted a photo, taken surreptitiously from behind, of the working-class representative Alexandria Ocasio-Cortez, captioned with a suggestion that “that jacket and coat don’t look like a girl who struggles,” he was ratioed. When Max Boot, current Washington Post columnist, former Republican, and vociferous supporter of the Iraq War, declared that “I’m one of the independents Democrats need to win,” he was ratioed. When David Tamarkin, the director of a culinary-themed website owned by Condé Nast, announced a job opening for an exhaustive (and technically illegal) “full-time freelance position” without benefits, he was ratioed. When the centrist commentator Jonathan Chait approved of Senator Amy Klobuchar’s history of abusive management, or affirmed the selfless intentions driving the wealthy backers of the charter school movement, or lavished praise on the benevolence of ownership at New York magazine on the day that other New York employees launched a union drive—time and again, Chait was ratioed.

In this sense, the growth of the ratio seems heartening, a sign that the popular voice still has value, small but growing, in a political economy commanded by careless, unaccountable, and deeply lame elites. It can be a way of demonstrating that the center does not hold, that The Man is a Moron, that the mainstream has withered to a skeletal gulch—in short, that there is not enough consent to the consensus for it to be worthy of the name. Yet reviewing the broader concept of the ratio reveals a stranger, more complicated vision. To begin with, there are other ratios at work on Twitter carrying different meanings. Mean likes per tweet to accounts following, or accounts following to accounts followed, serve as barometers of poster power. An abnormally high ratio of likes to retweets indicates a tweet is at once popular yet shameful to share: the so-called coward’s ratio. Rumors persist of a dark ratio, where a tweet receives few likes yet is shared and discussed relentlessly over dozens of private group chats. However, it is in the history outside of Twitter where “the ratio” takes on its greatest significance. The Twitter ratio today may serve as a quasi-progressive index, yet for centuries ratios as such have had a crucial role in determining the world that human beings, on or offline, for good or for ill, are compelled to inhabit.

Though the numbers needed to assemble ratios have been used by humans since prehistory, the valorization of the ratio as such can be dated with greater precision, to the sixth century BCE. When the philosopher Pythagoras taught that numbers were the fundamental substance of reality, the idea that the universe could only be truly apprehended via ratios naturally followed. Likely based in the thought of ancient Egypt, where Pythagoras had studied abroad extensively, in his native Greece this doctrine soon inspired the discovery of harmonic ratios in music, sculpture, and architecture. In mathematics, Pythagoras is credited with the theory of proportions. In philosophy his ideals would be carried on by Plato; through Plato his ideas would be transmitted to Rome (ratio is a Latin word rooted in reor, the verb for computing) and, via the Islamic world, early modern Europe. Like Pythagoras, René Descartes joined the professions of mathematics and philosophy; in the age of reason he inaugurated, the logic of the ratio would be applied to the natural world on an unprecedented scale and rationality raised to a primary cultural value. The infrastructure underlying the worldwide digital network where “the ratio” now re-emerges as a social artifact itself rests on discoveries in math, physics, chemistry, and electrical engineering made possible by proportional concepts, systemic rationalization.

Such a vision—ratios, ratios everywhere and not a soul in sight—can come off as sublime, but also as sublimely dreadful.

If the Twitter ratio is but the latest instance in a millennia-spanning history of the world being reduced to digits, it adds a special charm of its own, namely the prospect of instantaneous humiliation on a potentially global scale. For a person to enter the social media sphere, therein to voice an opinion, and then to learn that said opinion is relatively unpopular—this is the abstract, the ideal ratio, independent of specific politics. To be sure, one could even imagine a space where ignorant armies of fake accounts compete to ratio one another, but that would necessarily be less interesting, lacking the candid flame of personality. Yet perhaps it does not matter, in the end, what the occasion for being ratioed is. Whoever loses in a ratio, one side is sure to win—namely Twitter itself, a for-profit firm whose revenues depend on triggering ever-higher levels of user engagement on its eponymous app; the more engagement, the more profits from advertising; the more it profits from advertising, the longer it exists to enrich its owners. The billionaire owner of Starbucks may be losing discursively on Twitter, but the billionaire owner of Twitter wins—makes real money—from his loss.

In order to continue its existence, Twitter’s return on investment—a ratio between net profit from investment and the initial investment—must be sufficiently high to attract new shareholders and keep current shareholders from decamping for greener pastures. Even if a Twitter user doesn’t treat the app as a video game whose losing condition is getting ratioed, Twitter is an enterprise created and defined by ratios, and the corporation is anything but unique in this regard. One could say, without the slightest exaggeration, that the entire economic system of the present world has only ratios in mind. Perhaps the deep attraction of the individual ratio lies in the intuition of a larger, infinite space of ratios, seeing what is hidden usually made indisputably manifest—in capitalism as on Twitter, one strives not to be on the wrong side of prevailing ratios.

Such a vision—ratios, ratios everywhere and not a soul in sight—can come off as sublime, but also as sublimely dreadful. Observing an earlier, pre-online version of market-centered society, the philosophers Theodor Adorno and Max Horkheimer noted how it was “ruled by equivalence. It makes the dissimilar comparable by reducing it to abstract quantities. To the enlightenment, that which does not reduce to numbers, and ultimately to the one, becomes illusion.” German Jews in flight from Nazi Germany, Adorno and Horkheimer were well-positioned to perceive a unity in logic between the regimes of rational science and philosophy, utilitarian commerce, and blood-and-soil nationalism. If the ratio is paramount, then staying on the right side of the ratio is imperative; applying this logic to politics would necessitate calamity for every race, nation, class, and species save one’s own.

Adorno and Horkheimer wrote during a decade when the horrors inflicted by fascist states in Europe reached levels that were unmistakably genocidal. The 1940s would also come to see, due to the unremitting application of opposing force, states identifying as fascist vanish from the stage of world history. Even in the present, fascism as fascism is shied away from; it remains, in overwhelming part, a hate that dare not speak its name. Yet it is telling that the free speech of the reactionary West—plainly audible on Twitter, YouTube, and in other profit-driven venues—clearly favors the logic of ratios and rationalism über alles. Proportionally speaking, one side is losing to the other over time; something must be done to shift the balance back toward enlightened men. One might find their lack of feeling to be cruel, but in a certain sense these dead-enders are right on the money. Feelings don’t care about facts: the more out of touch, the higher the number.