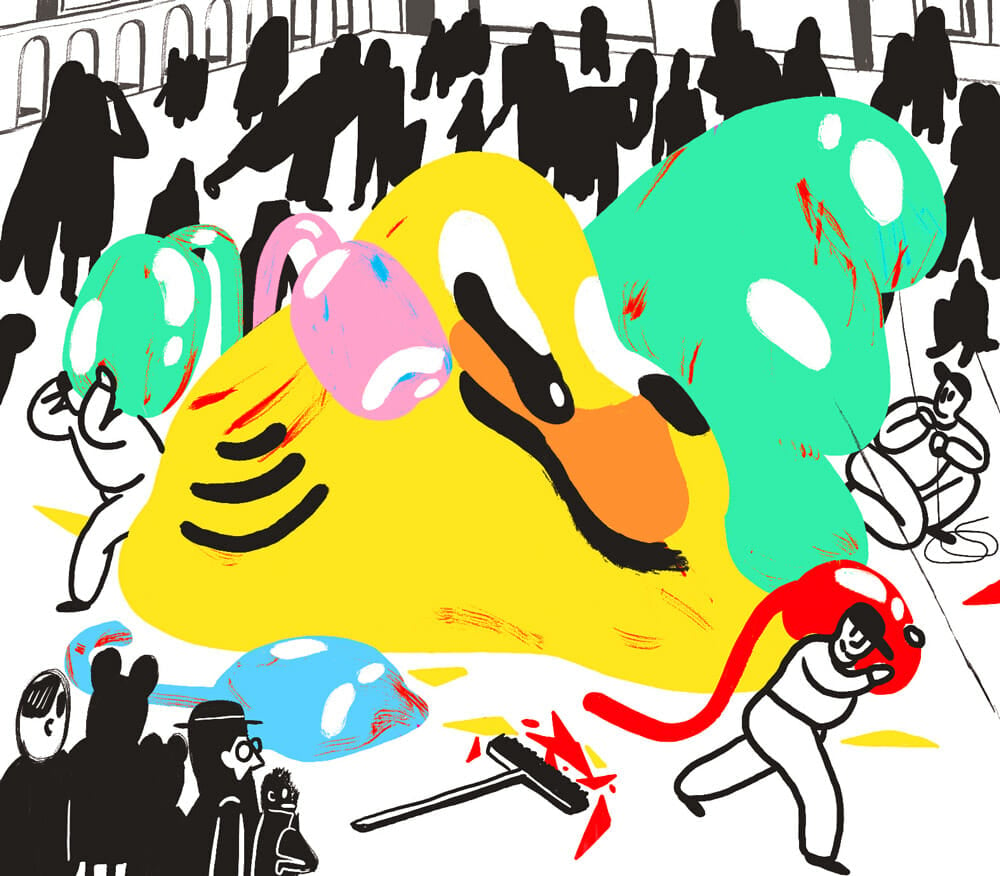 When Florentijn Hofman set his six-story-tall rubber duckie onto the waters off Tsim Sha Tsui, or TST, the glittering, moneyed development district in southern Kowloon, Hong Kong, more than a thousand spectators were awaiting its arrival. The local press maintained a countdown “duck watch” for the city’s new, if transitory, icon. Chinese factories reported soaring sales of the already ubiquitous toy. High-rise hotels advertised special rates for rooms that offered impressive “duck views.” There were more than a hundred journalists loitering outside Ocean Terminal that day, the coldest day in May in ninety-six years, yet it was hard to find a cynic in the crowd. Local reports lavished praise all over this PVC bundle of apolitical, nostalgic, squeaky joy—one at least partially inspired by the commercials of Dutch yogurt brand Yogho! Yogho! (they also financed a feasibility study for the floatie’s first edition). The duck was rumored to have been visible from outer space. “I see it as an adult thing. It makes you feel young again,” the artist said in an interview. “It means that we’re living on one planet, we’re one family. All the water in the world is our global bathtub. . . . You and me are taking the same bath.”

It was not duckie’s first dip in the global bathtub. In fact, Rubber Duck (2007) had already seen quite a bit of the world—— it had already floated right on into the ports of Amsterdam; Lommel, Belgium (where a vandal stabbed at it forty-two times); Osaka; São Paulo; and Auckland before its grand entrance at Victoria Harbour. Soon thereafter, the duck would pop up in places like Norfolk, Virginia (hosted by the Chrysler Museum of Art, with its twenty-four-hour “duck cam”) and Pittsburgh. Rubber Duck was launched in the city just in time for its debut edition of Art Basel. The buoyant—ha—figure was introduced as much to the delight of the well-heeled shoppers and museumgoers at TST as to the more muted glee of the art-world jet-set crowd pacing between parties in the lobbies of the Island Shangri-La and dinners at Dudell’s. Hofman introduced the duckie to make people happy when they saw it; and so they were. Encountering a huge floating bath toy is something of a social lubricant among visitors or, well, among any strangers within eyeshot of it. On a formal level, its absurd size reduces the object to something of a cheerful, sunny blob.

Yet the duck-object’s universal embrace and generation-spanning familiarity could not save it from its own disappointing half-life. Harbour City, the city’s largest shopping center and one of the stunt’s organizers, had expected to host the installation for just over a month, but within two weeks Rubber Duck had literally deflated, at least temporarily. An article in the South China Morning Post cheekily ruled out “fowl play.” A few days later it was ceremoniously reinflated and set again to sea.

Still, by any measure, the spectacle during its “natural” lifespan was a successful public work of art. So why was Hofman so upset at his duck’s own hatchlings? Given the popularity of the project in Hong Kong, as well as the artist’s relentless touring of it, industrious Chinese entrepreneurs created more ducks to grace the cities of Xi’an, Dongguan, and Wuhan—simultaneously.

“The rumors are false,” Hofman said of the unauthorized duplicate shanzhai duckies. “If people want the real duck, they have to come to me.” A rich retort considering the artwork itself mirrored Peter Ganine’s 1947 version of the toy. He continued to the press, “I’ve always said the rubber duck is a yellow catalyst. Right now what it is showing is that there is a lack of trust in China, and that is an enormous problem. . . . If I was a Chinese person, I would revolt. I would really revolt,” he said. “This kills society, this kind of behavior.”

If it’s unclear what, if any, public service the duck offers, it’s because public art itself is wobbling to and fro in a state of confusion. New arts institutions are mushrooming worldwide, often employed as an “emerging” city’s economic kickstarter, an engine for cultural capital. Yet our public art commissions are evidence that collective engagement with contemporary art is not at all advancing in nuance. So we deal with Rubber Duck as public statement. It’s no better in the United States, where we are left to reckon with Cloud Gate (2006), Anish Kapoor’s giant silvery kidney bean centering Chicago’s Millennium Park. Or Michael Heizer’s Levitated Mass (2012), a, well, giant rock, balancing over a concrete walkway on the campus of the juggernaut LACMA. Or Ugo Rondinone’s Seven Magic Mountains (2016), seven towers of stacked boulders painted in discordant neon hues, arranged in the open land outside of Las Vegas. The surrounding mountains of the Mojave Desert look downright drab in comparison.

Paris, the City of Frights

Paris, the reigning self-proclaimed global capital of high culture sees six, seven, eight million visitors storming the Louvre to visit the Mona Lisa each year. They also continue to, in their own style, find new ways to indulge in questionable public art—often from our very own. LA artist Paul McCarthy, whose conceptual references in his sculptures and performances also skew resolutely American throughout his decades-long career—B-movies, Disney—has a loyal if temperamental audience in the Parisian general public. Set in the elegant Place Vendôme, his coyly titled Tree (2014) took on the vague outline of a harmless if unusually smooth Christmas tree. All plausible deniability aside, it was very clearly an anal plug. Tree was upright for less than two days before a saboteurs toppled it, but it was only an aperitif for McCarthy’s exhibition at the Monnaie de Paris—the government mint that produces France’s euros. Chocolate Factory (2014), turned the baroque Salle Guillaume Dupré at the Monnaie into a fully functioning factory, turning out €50 hollow chocolate Santas holding “trees” shaped like sex toys. The sublime can take many shapes, I guess.

The Monnaie, of course, is betting on contemporary art (and a Guy Savoy restaurant) in a bid for relevance, even though it sits on the Left Bank of the Seine in the heart of the city. This strategy is now deployed ad nauseam by urban planners and architects, for whom exhibiting contemporary art is shorthand, a codified way of offering the poison of the art market and its antidote in a single dose. Contemporary art, the expensive kind, may drag along with it the signifiers of gentrification, overdevelopment, rampant speculation at auction, status, and leisure, but it also promises to help us survive these capitalist conditions with beauty, or at least provocation. Indeed, the pitch goes, art is the way we envision our better future—even if this future is to be distributed unequally. And this pseudo-utopian enthusiasm explains how airport terminals can become stops on the international circuit of the cities of tomorrow: Kinetic Rain (2012) of Singapore’s Changi Airport is a sparkling minor spectacle, but it doesn’t telegraph our shared cosmopolitan destiny quite as suavely as Ai Weiwei’s Forever (2013), installed at the Abu Dhabi International Airport, or the Rijksmuseum outpost in Amsterdam’s Schiphol Airport—a floating gallery displaying seventeenth- century Dutch masters’ paintings.

By 2018, at least, Paris had maybe tired of this posturing. After terrorist attacks on the city in November 2015, Jeff Koons, another worryingly effervescent figure, put forward a grand gesture with his towering Bouquet of Tulips (2016). A downright weird peace offering, the giant floating hand holding a wayward bunch of rainbow -dipped balloon flowers was a deeply discordant memorial for a national tragedy. It was also too loud for Paris to accept, especially into its core: it was to be installed at the entrance of the grand steps that join the Palais de Tokyo, the city’s young, sprawling center for contemporary art—and requisite DJ and smoker’s perch—to the Musée d’Art Moderne. French newspaper Libération published the open letter that would be its demise: the city’s gallerists, museum workers, and artists signed a message of resolute rejection. The sculpture would be tacky. Not tacky like a butt plug, because gratification is reconcilable to the Gallic imagination (and pleasure is nothing to be embarrassed about), but tacky in the sense that Koons’s work tends to lack in self-awareness. The bouquet had to go. The general public, too, seemed to favor returning the gift—whose immense production costs would eventually be assumed by the French state and citizens. There was a baseline sickness about this work’s tone, in other words, that did not take an art education to diagnose.

The music festival this year appeared to select art within a limited range of styles. These works, with a wink, would dole out aesthetic benefits and provide a focal point for concertgoers. Telling your friends to meet you at the rainbow tower later on is more than a loose game plan for getting back to your Airstream in one group; it’s the truly communal anchor that so many of these artists working on a grand scale claim to aspire to. And so we get NEWSUBSTANCE’s Spectra (2018), a high-rise that could seamlessly be traded out for a number of beachfront tech start-up headquarters in Santa Monica, or the big white star of R&R Studios’ Supernova (2018), with its soothing clinical lines. We get, in other words, a handful of pharmaceutical logos come to life.

But how does Coachella’s public program compare to, for example, LACMA’s collection of public outdoor sculpture? Very well, sadly! The city’s grand institution welcomes well over a million visitors into its galleries every year, not including its iconic Urban Light (2008) installation of 202 cast-iron streetlights outside its entrance, which entertains selfies and tourist shots on a busy stretch of Wilshire 24/7—even when the lights go dark. Considering that artist Chris Burden established himself with Shoot and Five Day Locker Piece (both 1971)—the first has him recording his friend shooting him in the arm; in the second he forces himself into a school locker, where he drinks water from a container above him and urinates in one below—this postcard-backdrop work is one of his most accessible, if not somewhat sterilizingly misrepresentative of much of the work that made him one of the most well-known artists of his generation. Further down the street, Alexander Calder’s Three Quintains (Hello Girls) (1964) has rounded fans in primary colors pleasantly swaying over a shallow pond; Heizer’s boulder sits near the entrance at West 6th Street.

These days, major institutions choose to beckon crowds with the avant-garde’s most anodyne objects, which means they share the same playground with Coachella’s splash mashes. Compare these displays to something like Chicago Gun Share Program(2018), an installation of a cluster of Citi Bike-like racks docking AR-15 replicas instead of bicycles in downtown Chicago’s Daley Plaza. These familiar ride-share stations dispensing murderous weapons, often used in mass shootings, are deeply unsettling in their informality—they realize their fatal accessibility in the invitation to “unlock and load” and conjure the self-inflicted epidemic that our country battles in the headlines nearly every day.

The artist of this provocative, emotional, gutting public work? The Chicago-based advertising agency The Escape Pod.