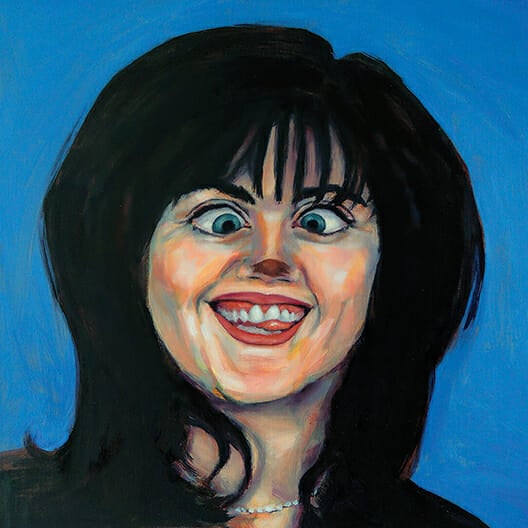 Amid all the renewed attention that Monica Lewinsky has won from a pundit class unable to wean itself off the lubricious soap-saga of the Clinton years, a weird, um, lacuna in the record has escaped notice. According to Lewinsky’s 1998 deposition, she orally “stimulated” the president’s “anus.”

It’s odd that, for all the commentators who ginned up no end of forensic titillation from the cigar-in-the-vagina details of the Starr Report back in the day, this graphic moment of intern-to-commander-in-chief sex play got no real traction in the mediasphere. Maybe that’s because you have to piece together the story from a redacted record, and who wants to go there? Or maybe it’s because it literalizes the clichéd idea of ass-kissing, which is, after all, the dominant mode of career advancement in D.C.

Even so, the silence stretches way beyond the anxieties of influence. If you have ever been on either side of this transaction during straight sex, then you know you have to be either 1) extremely trusting of your partner because assplay is ultimately a byproduct of love and intimacy; or 2) so high.

On the latter front, I’m not simply referencing narcotics—though they help! No, I’m talking about a towering, ego-inflating high, one that makes you swirl around inside a feeding-frenzy state, convinced that your body and mind are elevated beyond taboo stuff. In that state, you’re like, “FUCK YEAH, PUT YOUR TONGUE HERE!! I’M GOING TO LIVE FOREVER!!”

So we know what turns Clinton’s crank. I think many other men, married men, men who’d been sworn into office by the Supreme Court, would maybe have lost their boners when sending troops to Bosnia. But not Bill Clinton. That dude was down—and down to do a lot more than fuck!

Maybe Monica really wanted to eat out his ass. Still, how do you even let things get to the ass-to-mouth level if you are the married president of the United States, with a teenage daughter in the wings?

This epic scandal went, uh, down, when I was fourteen, closer to Chelsea’s age than Monica’s. At the time, my eighth-grade psyche considered twenty-two-year-old women, like Monica, to be fully formed, worldly masters of their emotional and sexual universes. Now that I’m thirty, I think how young some girls are at twenty-two. Being among women in their early twenties makes me a tad uneasy, because I know how fucking dumb they can be and how much they are going to hurt themselves in the coming years.

That’s an instinct I think most adults have: either to mentor, protect, or stay the hell away from the bright young things and not have your asshole licked by them. But not president Bill Clinton! He arranges for a rimjob in his private West Wing bathroom.

Of far greater, and possibly related, import is what the 1992 election meant for the rest of us shit-eating saps. Remember then: America had suffered twelve years of Republican rule in the White House, and more than forty-four million people voted to put Bill Clinton in office. I imagine that a well-adjusted psyche—one that didn’t swell to elevated states of arousal around a young White House intern—would have felt the weight of those forty-four million votes, and that weight might have produced a voluntary moratorium on certain bodily impulses and an effort to meet the expectations of the body politic with due dignity.

Even after you factor out all the Hillary ’16 speculation—another level of nausea entirely—you’re still left with the grimmest legacies of Bill’s fun-loving policy heyday: the NAFTA sellout of American workers; the rampant deregulation of the financial sector, leading directly to the 2008 meltdown; the 1992 electrocution of Ricky Ray Rector as the most immoral sort of Hunger Games–style political theater. Oh yes, those were the years.

And now that New Democrat hustler pulls down seven-figure speaker fees and captains his very own charitable foundation. I guess the only way to coax a moral from this sordid nexus of policy and predatory alpha-male foreplay is to coin a redemptive slogan: Monica Lewinsky kissed his ass, so we don’t have to!