Denis Johnson was a writer who epitomized three themes that, in other hands, we would be right to view with suspicion: drugs, Beatnik delinquency, and a special brand of burnout masculinity familiar from lesser works by Bukowski, Hemingway, and Henry Miller. His death last May at the age of sixty-seven was met by a rare consensus among critics that we had lost one of the few contemporary masters capable of perfection on the page, with special attention given to 1992’s Jesus’ Son, which established Johnson’s minimalist, damaged voice and launched a generation of (largely male) imitators. Twenty-six years later we have Johnson’s second, posthumous collection, The Largesse of the Sea Maiden, which follows the National Book Award-winning Vietnam novel Tree of Smoke, 2014’s sleek soldier-of-fortune thriller The Laughing Monsters, and the brilliant novella Train Dreams, a working-class Western whose last lines are typical of Johnson’s rugged, transcendent style:

He laid his head back until his scalp contacted his spine, that far back, and opened his throat and a sound rose in the auditorium like a wind coming from all four directions, low and terrifying, rumbling up from the ground beneath the floor, and it gathered into a roar that sucked at the hearing itself, and coalesced into a voice that penetrated into the sinuses and finally into the very minds of those hearing it, taking it higher and higher, more and more awful and beautiful, the originating ideal of all such sounds ever made, of the foghorn and the ship’s horn, the locomotive’s lonesome whistle, of opera singing and the music of flutes and the continuous moan-music of bagpipes. And suddenly it all went black. And that time was gone forever.

A talent like Johnson’s would be invaluable regardless of subject matter, but what The Largesse of the Sea Maiden—which arrives with blurbs from Don DeLillo, Zadie Smith, George Saunders, and Philip Roth (that is, the best of the best)—makes clear is that he might be the last writer to chart a romanticized, hard-bitten maleness that appeals to angry young men, just as Hermann Hesse and Yukio Mishima did in the 1960s, when Johnson was growing up writing poetry (his first foray into fiction, Angels, wouldn’t be published until 1983). Longtime Johnson fans will immediately recognize the terrain of “Strangler Bob,” a coming-of-age piece about inmates in county lockup forging friendships while gobbling up acid and contemplating their worthless lives. The opposite of an uplifting “epiphany” story, it ends with our narrator telling us, “Thereafter, I was constantly drunk, treated myself as a garbage can for pharmaceuticals, and within a few years lost everything and became a wino on the street, drifting from city to city, sleeping in missions, eating at give-away programs . . .”

The Largesse of the Sea Maiden would seem to mark the end of the age of bare-knuckled literary machismo.

It’s probably clear at this point that I both revere Johnson, particularly the bluesy and forlorn Resuscitation of a Hanged Man, and somewhat distrust my enjoyment of books like the balls-out noir Nobody Move (originally published in Playboy magazine) or Jesus’ Son, with its druggy existentialism. Although by no means true across the board, writers on average tend to be insulated from the precise experiences Johnson describes. His signature device is an accessibly vicarious loserhood that allows his readers to sympathize with “wild men.” His characters get high on pharmaceuticals while hitchhiking on the highway and pull the copper out of condemned houses for drug money; they’re figures we can simultaneously pity and identify with. And then there’s the habit of Johnson’s, present in this collection’s “Triumph Over the Grave,” of seeming to drop all artifice in order to speak directly to the reader (professing of a novelist named Darcy Miller that “I’m aware it’s the convention in these semi-autobiographical tales—these pseudo-fictional memoirs—to disguise people’s names, but I haven’t done that” when, unless Google has failed me with regards to Mr. Miller, he has), a technique that pretends to truth when the actuality is pure fiction. The stated ethos of Johnson, whose work is frequently attached to the descriptor “outlaw,” was to “Write in blood. As if ink if so precious you can’t waste it,” which sounds good, but who has that much blood to spill over writing? If gruff, moody stories like “Triumph Over the Grave” were all that Johnson wrote, his death would be no less tragic, but The Largesse of the Sea Maiden would mark the end of the age of bare-knuckled literary machismo. Instead it is a revelation in five stories, each of them formally unique and death-haunted, proof that Denis Johnson is more deserving of his prestige than we could have realized.

The title story of the collection is difficult to summarize because it doesn’t so much rise and fall as drift across the life of an embittered ad-man, famous for an animated commercial he designed for a bank chain, as he reckons with the death of his friends and the assorted memories that stick in his skull. Almost nothing happens, and yet we are riveted by every line, especially when Johnson reaches out of the page and grabs us by the scruff of our neck:

I wonder if you’re like me, if you collect and squirrel away in your soul certain odd moments when the Mystery winks at you, when you walk in your bathrobe and tasseled loafers, for instance, well out of your neighborhood and among a lot of closed shops, and you approach your very faint reflection in a window with words above it.

The Mystery, something elusive and so real that it is almost hallucinatory, is Johnson’s real subject in these stories, and he approaches it with incredible variety. There’s the rehab patient in “The Starlight in Idaho,” who writes a maniacal, hallucinatory series of letters to friends, family, and even the Devil (“down through the toilet formerly known as my life”) in order to purge himself of the dozen of hooks in his heart that he traces back to their source. There is also the aforementioned teenage roughneck of “Strangler Bob,” who begins his tale with an arresting pair of sentences: “You hop into a car, race off in no particular direction, and blam, hit a power pole. Then it’s off to jail.”

So far, so good; every lifelong fan of Johnson will be content at stories that point back to Jesus’ Son and confirm his image as the Ovid of failure and deadbeats. But then we come to “Doppelgänger, Poltergeist,” in which an adjunct writing instructor compares the creative life to the career of Elvis and counsels his students to purge their personal Colonel Tom Parker, “lethal champion of mediocrity” and ruiner of Presley’s outlaw instincts. He then becomes fascinated with a gifted student who insists that the Elvis that perished on August 16, 1977 was an imposter, Elvis’ identical twin brother, supposedly born stillborn, and whose lifelong obsession is to dig up the King’s grave at Graceland in order to prove it. What kind of story is this? It is in fact a comedy, one so black we might well miss it, and one that practices what it preaches: expelling the censorious inner Colonel within and excavating, sentence-by-sentence, a phantom twin.

Johnson seemed to have glimpsed a just-out-of-reach infinity.

“Triumph Over the Grave,” ends with a farewell that we are encouraged to take at face value: “The world keeps turning. It’s plain to you that at the time I write this, I’m not dead. But maybe by the time you read this,” which reads as a rhyming rejoinder to the famous mic-drop of “Out On Bail” from Jesus’ Son: “after a while they forgot about him, and his breath failed without anybody’s noticing. He simply went under. He died. I am still alive.” Johnson seems to have been rehearsing for death in these final stories—and I dearly wish there were more—but of course Johnson himself will never be forgotten. It’s not every writer who can completely summon a whole character out of nothing, as when he writes of a painter named Tony Fido that

He believed in spells and whammies, and such, in angels and mermaids, omens, sorcery, wind-borne voices, in messages and patterns. All through his house were scattered twigs and feathers possessing a mysterious significance, rocks that had spoken to him, stumps of driftwood whose faces he recognized. And in any direction, his canvases like windows opening onto lightning and smoke, ranks of crimson demons and flying angels, gravestones on fire, and scrolls, chalices, torches, swords.

It’s a strange passage for such a worldly writer, but Johnson seemed to have glimpsed a just-out-of-reach infinity and, in book after book, brought it down to earth. He also sometimes seems, given the recklessness of his youth, to have been surprised by his own (relative) longevity. In another passage, the narrator considers the possible destiny “he’d pictured . . . when I was a criminally silly youth: a washed-up writer with books and movies and affairs and divorces behind him and nothing to show for it now, eking out a few last years—drinking, sinking.” Instead, Johnson went out at the top of his game. The Largesse of the Sea-Maiden is a bittersweet reminder of how much we have lost and how much we still have to gain from this unbelievably gifted and quintessentially American writer. 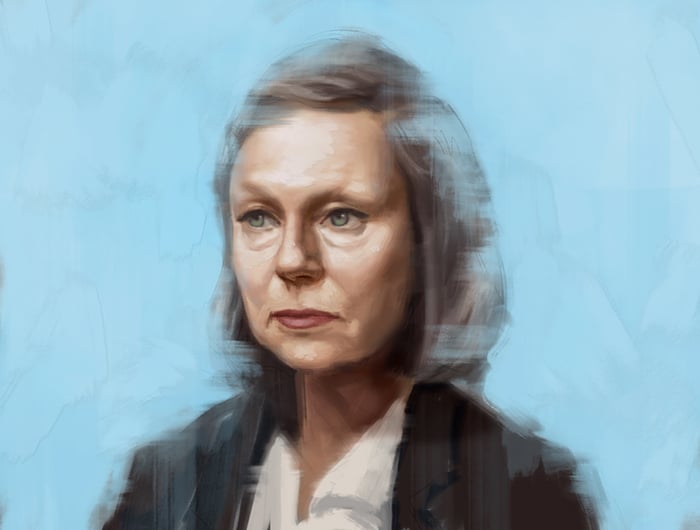 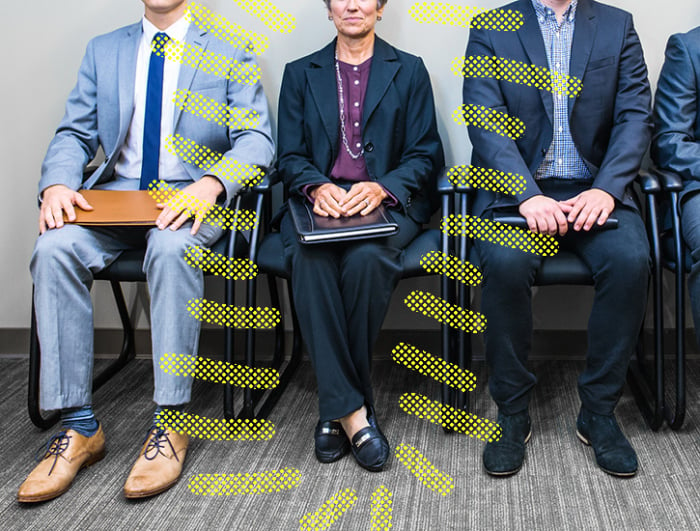 In the Land of Me
Rafia Zakaria
Columns 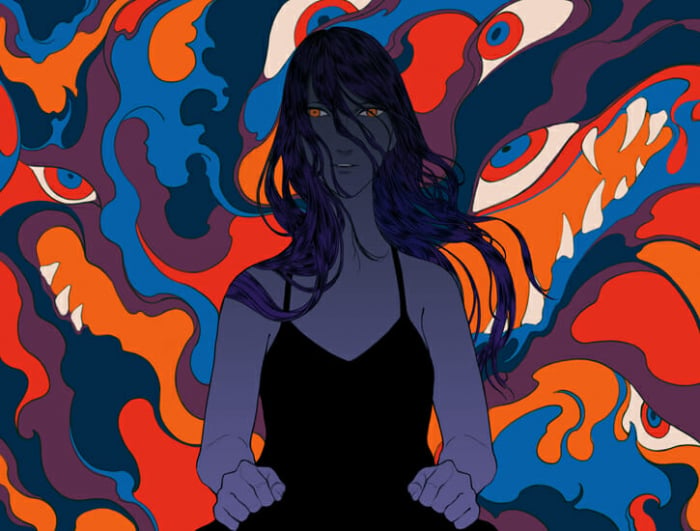