On January 21, a crowd of a hundred gathered outside the charred husk of a twenty-four-hour Taco Bell restaurant in Montgomery, Alabama, that had burned down earlier in the week. Summoned by a Facebook event page calling them to “join us in mourning the okay customer service as we stand together in the loss of our beloved Taco Bell,” they were instructed, “May we never forget the okay customer service and long wait line for the oh so delightful baja blasts and five-dollar quesadilla box. Bring your own candles. We are broke.”

A silent and stern-faced praise group, The Baja Angels, dressed entirely in white, ushered in a chartreuse-coiffed singer, who led the crowd in a keening lament for their beloved Baja Blaaaaaasssssst for the assembled news cameras. Another vigil attendee mock-fought back tears: “I can’t eat here.” A Baja Blast was poured out, sacramentally.

On February 9, a similar crowd gathered in single-digit temperatures for a candlelight vigil outside of a closed Arby’s in Minneapolis. An image of its iconic enormous cowboy hat neon sign was projected onto a massive screen. There were odes to the Arby’s sign to the tune of Danny Boy. There were fire dancers. There was speculation that Minneapolis might actually be weirder than Austin. A sign read “Rest In Roast Beef.”

Commentary on these vigils ranges from the bemused, “are these people crazy or what” takes of local news broadcasts, to the curmudgeonly, “seriously, get a life and put your energy into things that really matter” huffiness of website commenters, to the much more pointed critique of Minneapolis civil rights activists wondering how many of the (overwhelmingly white) Arby’s attendees would also support vigils for the victims of police violence.

All of these takes are facially valid. However, I am going to suggest that this phenomenon is the result of a confluence of cultural currents that could only arise during this absurd moment in history. Guys. It’s time for some roast beef theory.

As documented in this fine publication and elsewhere, late capitalism is synonymous with the omnipresence and near-omnipotence of the corporate brand. Naomi Klein has noted that “Nike isn’t a running shoe company, it is about the idea of transcendence through sports, Starbucks isn’t a coffee shop chain, it’s about the idea of community.” World-bestriding corporations have apotheosized from the blood-and-sweat materiality of actually making things to an ethereal realm of pure ideology. (The blood and sweat are still being shed, it’s just happening well offstage so as not to interfere with the angelic zither and lyre music of these heavenly brands.) We are cursed to live in an age in which “brand evangelist” is a legitimate vocational title.

Turn that Smile Upside Down

If the makers of tennis shoes and other gewgaws are busily ascending into quasi-religions, the quasi-religious social customs by which communities stand in solidarity and bear witness to the tragedies which befall them are being converted into industries. Following 9/11, the first macrotrauma of the twenty-first century, many would-be arbiters of culture demanded a “new seriousness” in which we abandoned the smirking ironism of nineties pop culture. Instead we were to satisfy ourselves with mirthless tales of rock-ribbed, steel-jawed ciphers who confront—and more importantly—DO WHATEVER IT TAKES (i.e. torture some folks) to defeat existential threats to the good ol’ red, white, and blue. For a time, this call was heeded. An alphabet soup of acronymized prime time dramas (24! JAG! NCIS!) filled the evenings of the broadcast networks with narratives of Very Serious Americans defeating Vaguely Foreign Evil, serving as the entertainment auxiliary to the barrage of Very Serious News Reports of WMDs in Iraq blaring from your parents’ and grandparents’ televisions seventeen hours per day. A cottage industry of manufactured patriotism found new and inventive ways to emblazon either the American flag or a bald eagle (and preferably both at once) on every object ever assembled by human hands.

The quasi-religious social customs by which communities stand in solidarity and bear witness to the tragedies which befall them are being converted into industries.

While there clearly was a market for much of this, Americans in the aughts by and large preferred to either retreat into the comforting, spectacular fantasies of the Lord of the Rings and Harry Potter film franchises, or to gleefully dive headlong into shameless celebrity voyeurism offered by the likes of Paris Hilton. As a cultural period, 2001-2008 is not marked so much by its solemnity as its vapidity. Its best signifier is a bedazzled fleur-de-lys on the ass pocket of some artificially distressed boot cut jeans.

The demands for seriousness were renewed during the second macrotrauma of this century, the economic crisis of 2008. Threaded within the macrotraumas were the less epic, but still disturbing, events like mass shootings, cities left to drown, beloved celebrities dying in rapid succession. In response to these, there was a commensurate arising of candlelight vigils—beginning with a massive display on the National Mall in D.C. the day after 9/11. Once the province of relatively local tragedies (“little Timmy’s fallen down the well!”), candlelight vigils became spectacular national and international media events.

The election of Donald Trump is the third macrotrauma of the twenty-first century. It is a true apocalypse in the sense of the original Greek word ἀποκάλυψις (unveiling, unmasking). We are in the midst of both tragedy and farce, and the cultural dialectic of seriousness/frivolity is shattered. Stentorian, quaver-voiced “HAVE YOU NO DECENCY, SIR?” outrage is about as effective as a peashooter against an Abrams tank with this guy. Likewise, the traditional tools of subversion, irony and satire, are equally useless. Trump cannot be adequately parodied because the wildest imaginings of the most coke-addled script will always be outdone by the reality at hand.

Situationist luminary Guy Debord would probably be unsurprised by the present moment. In response to the hyper media-saturated unreality he saw being created by capitalism, he popularized the technique of détournement (“rerouting,” “hijacking”), in which the cultural expressions of capitalism are diverted to new, subversive uses. A typical act of détournement might involve turning the slogans and logos of corporations against the brands themselves—such as rearranging the letters of a Marlboro billboard to read “it’s a bore.” This approach has continued with the works of culture-jammers like Negativland and AdBusters, and arguably carried on to social media with the rise of Weird Twitter. The flipside of détournement is recuperation—in which once-revolutionary concepts are co-opted, defanged, and ultimately returned as commodities within the system (think of a Barneys selling a Che Guevara shirt for $350).

In the 1980s, anarchist writer Hakim Bey coined the term “Temporary Autonomous Zone” (TAZ) to describe the emancipatory project of capturing the freedom, creativity, and energy of popular uprisings without replicating the inevitable betrayals and violence that such revolutions provoke. According to John Jordan, Bey wanted TAZs to “feel like an exceptional party where for brief moment our desires are made manifest and we all become creators of the art of everyday life.” Bey holds that we should refuse to wait for the revolutionary moment, and instead create spaces of freedom in the here and now, while avoiding direct confrontation with the state. To avoid such confrontations, Bey advocated subterfuge and stealth—carving out brief spaces well away from official attention.

The mock vigils outside of shuttered fast food joints are patently ridiculous. In and of themselves, they will start no revolutions, they offer no obvious threat to the contemporary order. What they do is offer a glimmer of a synthesis of détournement and temporary autonomous zones that I am going to call “folk détournement.”

These mummeries have taken the idea of “brand loyalty” to its absurd conclusion—mourning the loss of a fast food outpost in an asphalt wasteland.

These mummeries have taken the idea of “brand loyalty” to its absurd conclusion—mourning the loss of a fast food outpost in an asphalt wasteland as one would mourn a beloved family member. They are a gleeful nose-thumbing at the overwrought solemnity of post-9/11 patriokitsch.

Rather than lurking in shadows as advocated by Bey, this kind of folk détournement understands that we’re already in the panopticon so we might as well invite the local news crew to the party. Instead of making futile attempts to negate mass media, it makes itself superficially irresistible to broadcasters. It carves out TAZs right in the sclerotic core of consumerism: fast food parking lots.

Folk détournement replaces the antagonism of its Situationist predecessor with the deliberately overly-agreeable “yes, and . . . ” of comic improv. Folk détournement understands that people love curly fries and Baja Blast and they hate being shamed for loving those things. By not having any goals to fall short of, folk détournement cannot fail. As with folk magic and folk music, the practice of folk détournement will precede any theory. We make the path by dancing.

Luke Cragg is an attorney and writer in Saint Paul, Minnesota. He could really go for some curly fries right now. 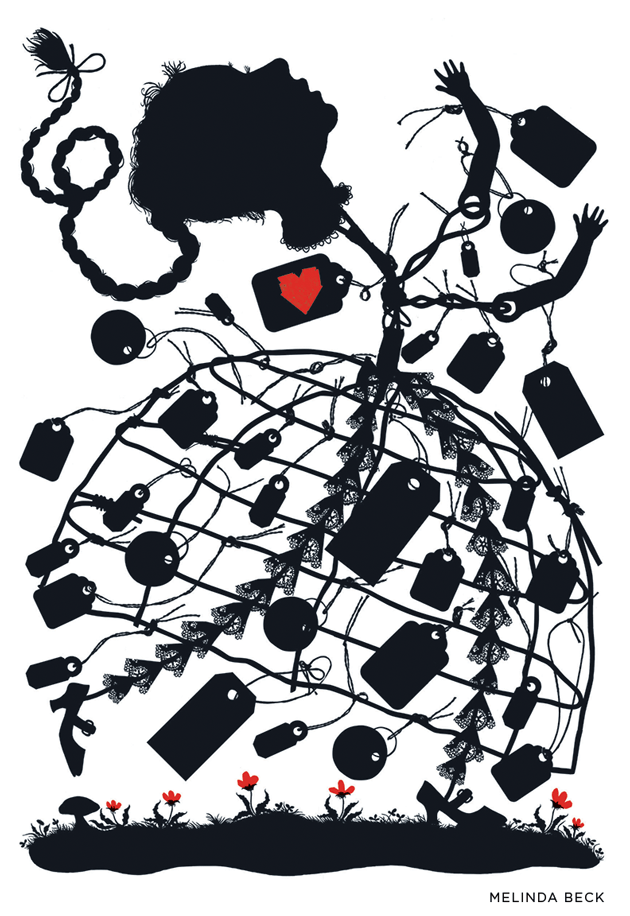 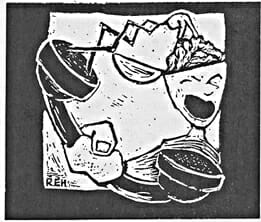 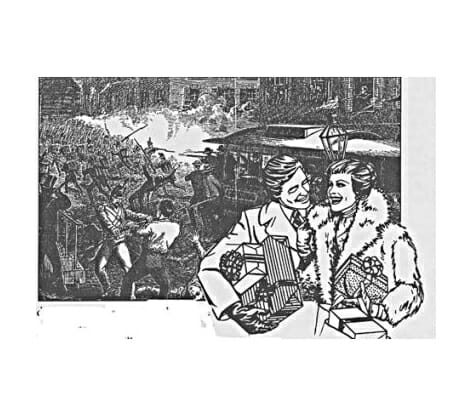