Sizzler has provided white-bread fare above and beyond the cheesy toast you can always find beckoning to you at the self-serve chain’s salad bar. The brand managers at Sizzler HQ also want to remind you that the restaurant is a miniature consumer’s republic in its own right, judging by a bizarre 1991 promotional video that was revived on the Internet this past week, and caromed around a seemingly endless regress of disbelieving social media feeds.

The spot—which is evidently a come-on to would-be Sizzler investors and franchisees—offers up a salad bar’s worth of kitschy Americana iconography: It features not just your standard-issue Morning-in-America tire swings and playful dogs, but a sailor in traditional navy blues kissing his sweetheart as the sun sets on the horizon, and a couple jogging in matching sweats. There’s a gray-bearded fellow in a sea captain’s cap looking lovingly at his granddaughter, in what appears to be an early example of tie-in marketing with Long John Silver’s.

The theme song’s overwrought vocals are interspersed by a spoken-word doo-wop breakdown of Sizzler’s brand messaging. This strange, campy mash-up of motivational slogans with stodgy popular-front symbols worthy of the Works Progress Administration made the promo the web’s most oddball viral video since Adult Swim’s “Too Many Cooks.” The Adult Swim network’s trademark brand of off-kilter anti-humor is meant to inoculate knowing viewers from the terminally weird, too-quaint-by-half American celebration of consumer sovereignty. But of course nothing in the Sizzler video is self-aware or ironic enough to qualify as hipster chic.

Indeed, what’s disarming about the whole kitsch-fest is how utterly sincere it appears to be. The relentlessly bright, jump-cut production values call to mind the textured scrim of VHS fuzz, and the righteousness of the Christian pop-rock hit “I Could Sing of Your Love Forever.” Part propaganda video, part infomercial, part “We Are The World” style paean to American superiority, it has the patriotic effervescence of a Mike Huckabee political spot—or if you prefer, anything with the words “Glenn Beck” attached to it.

Most of all, there’s the insipid song:

All across America, the song of freedom rings
The song that’s growing stronger everyday
It tells us when we listen to the message that it sings
Let us lift our voices, we can make the choices
We will make the most of all, the best that freedom brings
Sizzler is the one that brings us choices
Reachin’ out across the USA
Each and every day, get a little freedom in your life.

You know you’re brainwashed when you find yourself singing about Sizzler in the shower and boogying to the Jazzercise-grade sax solo, which is exactly how I spent yesterday morning.

The ad is a virtual time-capsule of nineties-era motivational nonsense, but just beneath its many laughable surfaces is an altogether more serious, and creepy, message: the pseudo-religious exaltation of banal consumer choice. Here, “choices” becomes code for the endless variations of steak-salad-seafood dining awaiting the Sizzler patron—and, by extension, the magnanimous virtue of all free-market enterprise. “Sizzler is the one that brings you choices” is the chain’s daft way of re-mixing Burger King’s “Have it your way” slogan over the Twin Peaks theme song.

The all-you-can-eat mantra of this commercial articulates the ethos behind the success of down-home dining spots like Old Country Buffet, Golden Corral, Cici’s Pizza, Hometown Buffet—or, for the more daring fast-food connoisseur, Pancho’s Mexican Buffet, and the Royal and Mandarin Buffets, which specialize in Chinese cuisine. All the John Ford frontier imagery evoked in the brand names of Sizzler and its many buffet competitors neatly promotes the idea that all-you-can-eat, bang-for-your-buck consumption is an American birthright.

But the wonders of self-determined choice are rarely expansive enough to include the workers tending the fryers and wiping off the sneeze guards. In Illinois last August, where state attorney general Lisa Madigan investigated a slew of Chinese-style buffets for alleged abuses against immigrant workers, including wage violations and discriminatory practices. These employees reportedly worked shifts of eleven to thirteen hours, without breaks, in order to continuously refill those restaurants’ lamp-heated buffet trays. In 2010, authorities raided two Phoenix Sizzlers in search of undocumented workers.

Another Sizzler innovation breathlessly touted in the video is the “restaurant within a restaurant” experience. The traditional restaurant for Sizzler customers, as the brand name suggests, was simply the grill; but the choice-inebriated enthusiasts in the video are wowed by the charms of the Buffet Court. The upshot, we’re informed, is the ultimate expression of free choice: “two completely different dining experiences” under the same feverishly branded roof. Sizzler has since retired this overly busy layout—no matter what the ambient setting may be, you’re still eating from the same two-and-a-half food groups. Today’s Sizzler favors a straight salad bar/buffet format, with steaks and pricier items made to order off the menu. Nevertheless, there’s still a restaurant within a restaurant here, and all over our great fast-food nation: the consumer playground of the dining space versus the pinched livelihoods that workers are forced to coax out of the kitchen. 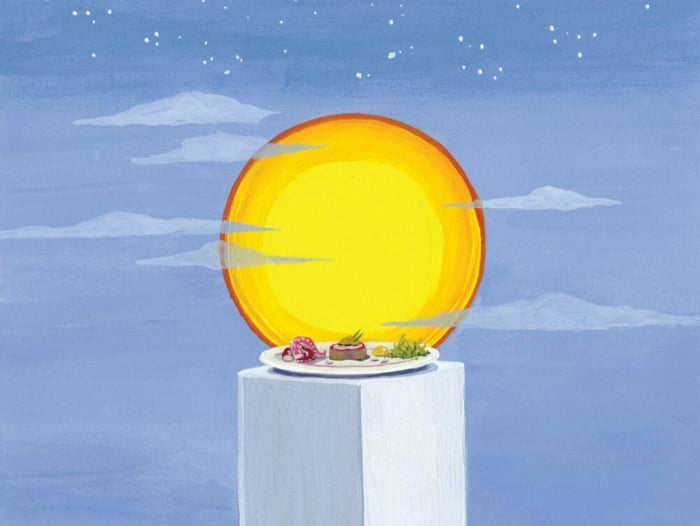