Early in the night, I made nervous jokes about not wanting to DJ a funeral. For one thing, I hadn’t really thought about the possibility of losing—at least not in terms of what it would sound like. Would I play break-up songs? “Shake It Off”? “We Belong Together”? “You Give Love a Bad Name”? Or would I just pack up my equipment and leave, reminded of why I generally stay away from electoral politics?

Thankfully, that’s not what happened. Not long after the polls closed, I found myself providing the score for some next-level remix of Rocky, co-starring the women, queers, and people of color who had coalesced around Philadelphia district attorney candidate Larry Krasner, a thirty-year-long ally who had always walked the walk and who unequivocally tied his campaign, with its slogan “Justice Makes Us Safer,” to local and national movements for social and economic justice.

I had turned into someone I never thought I would be: the DJ for a candidate for district attorney.

It was so fucking beautiful. We wanted this. We needed this. I heard it in every cheer, saw it every face, and felt it in every hug. The race had been looking good, but even so, we surprised ourselves. Conventional wisdom said our candidate was unelectable, but here was proof that a politics of dignity for all can win—and win big. On May 16, Krasner garnered more votes than the second and third place finishers combined, and hundreds of people turned up for his election-night party. We packed into the courtyard and community room of the John C. Anderson Apartments, one of the first LGBTQI mixed-income housing projects in the country, to celebrate a historic primary victory that should now, in a city where registered Democrats outnumber Republicans seven to one, set the stage for general election success in November.

I, for one, had turned into someone I never thought I would be: someone who volunteered to canvass door to door ahead of a local election, someone who sent Facebook and text messages I still find a little tacky to friends and acquaintances encouraging them to vote. Even weirder, somehow I became the DJ for a candidate for district attorney. What is life?

But Larry Krasner is not a typical DA candidate. He’s never been a prosecutor. He’s never held political office. Instead, as a civil rights and criminal defense attorney, he’s sued the police more than seventy-five times. His platform explicitly calls for the end of mass incarceration, and he vows to never seek Pennsylvania’s death penalty. He argues for improved public education, better drug treatment, and other pragmatic and evidence-based approaches to crime prevention. Krasner didn’t tone down or apologize for his politics to get elected—he doubled down. He said yes, that’s what I believe, and here’s why. He had conversation after conversation.

Larry Krasner is not a typical DA candidate. He’s never been a prosector. Instead, he’s sued the police.

When I really started to understand the momentum that was building, I began to question why those of us who know criminal justice in America is all too often anything but just—is racist and classist and one of America’s greatest flaws—hadn’t thought of this before. Why hadn’t we dared to go after the city’s so-called “top cop”? Why hadn’t we moved sooner to replace the typical lock-them-up DA with someone like Krasner, who is interested in addressing the root causes of our criminal justice problems?

Of course, it’s not that simple. Or rather, it is and it isn’t. Two of the songs I planned to play no matter what happened were Joey Badass’s “Devastated”—for the tenuous hope in its rhythms and in lyrics such as “At times I thought we’d never make it/ But now we on our way to greatness/ And all that ever took was patience”—and Rihanna’s “Work,” because, well, it says the word work seventy-nine times, or about one time for every three doors I knocked on. In the rain. On a Saturday.

I first heard about this people’s lawyer guy, Larry Krasner, when I moved to Philadelphia in 2000. He was representing, pro bono, my then housemate, Kate Sorenson, an ACT UP activist who’d been wrongfully arrested and held on million-dollar bail during the Republican National Convention protests that year. (Her case went to trial and she won.) It wasn’t the last I heard of him. His name kept coming up, year after year, as he defended countless lefty activists, including several involved with the Occupy and Black Lives Matter movements. At some point, a friend and fellow co-founder of the Up Against the Law Legal Collective, Jody Dodd, became his assistant, and I started to hear about his support of decarceration.

Like many of us who campaigned for Krasner, I believe in the kinds of changes he advocates for because I’ve seen the evidence. I have done street outreach and social work with families involved with DHS and with teens on probation. Now, as a professor at the Community College of Philadelphia, I teach college classes in city jails and special re-entry classes at the main college campus.

The “new” ideas we need have been around for a long time, and so have the people. It’s just a matter of getting them into electoral politics—a task that is much easier when we have someone to believe in. Krasner’s campaign was able to use an adhesive not always seen in local politics: enthusiasm. There were so many potlucks and fundraisers and community events for Krasner that at least one reporter published a piece mocking the candidate’s packed calendar and earnest following. The race was soaked in money, and Fox News and others lost no time spinning the tale that Soros had straight up bought the Philly DA race, citing the $1.45 million a Soros-funded super PAC spent endorsing Krasner. (Never mind the $1.25 million of personal funds dropped by the fifth-place finisher.) But clearly they weren’t seeing just how completely Krasner was able to upend politics as usual.

The “new” ideas we need have been around for a long time, and so have the people. It’s just a matter of getting them into electoral politics.

I mean, this is a guy who, just a few days before the election, performed with the popular punk band Sheer Mag a cover of The Clash’s “Clampdown,” a song that is critical of the failures of capitalism. (He took off the jacket but kept the tie.)

So of course this was also the song I played when Krasner arrived at the election night party and took the stage. “This is not about one person. This will never be about one person,” Krasner said in his victory speech, and he couldn’t have been more right. This win was brought about by a broad multi-racial coalition of community groups, unions, and volunteers, who knocked on tens of thousands of doors to start conversations about criminal justice. And Krasner was able to pit his unified supporters against a chaotic wreck of a field. In a seven-person primary, traditional city power structures were divided. The governor, mayor and the Democratic party declined to endorse anyone, and the city’s traditional big backers split their approval among the usual-suspect candidates. For once, divide and conquer seemed to work for us rather than against us.

“Liberals, Progressives Beat Up Philadelphia’s Party Machine on Election Day,” went one post-race headline. Now we need to figure out how to replicate this dynamic again, in cities across America, especially as Jeff Sessions sets out to further warp criminal justice at the federal level with his how-is-this-not-a-joke New Old War on Drugs.

It is still possible that Larry Krasner won’t be Philadelphia’s next DA. The Republican candidate, whose support of civil asset forfeiture is the kind of policy that even Clarence Thomas critiques, will nevertheless find support from some of the hundred thousand mostly white Philadelphians who voted for Trump, and there’s a chance old-guard Democratic party types might now align behind an independent. But now more than ever, when we get a win, we have to call it what it is, since that’s what will keep many of us—veterans in activism and in giving a shit, but new to electoral playmaking—going door to door.

So in Philly last week, that’s what we did. We celebrated. Instead of playing “Don’t Stop Believin’,” I got to spin songs that had a little more bite. (As one local journalist tweeted, “Dead Prez is playing at Larry Krasner’s Election Night Party. Obviously.”) And instead of the same old bullshit, all Philadelphians now get—even in Trump and Sessions’s America—a decarceration DA candidate for the fall.

Marissa Johnson-Valenzuela is the founder of Thread Makes Blanket press and is working on a novel. 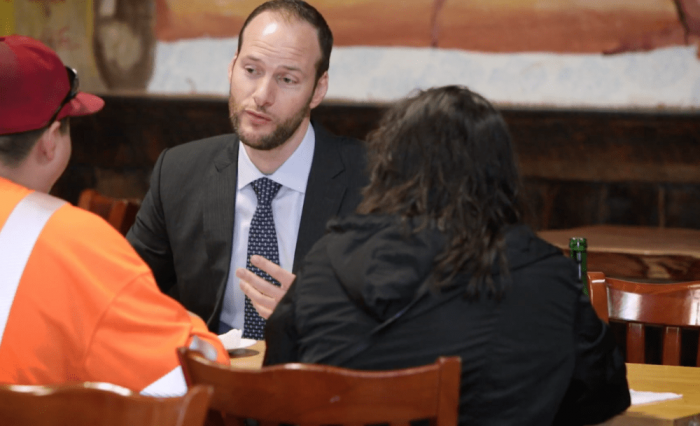 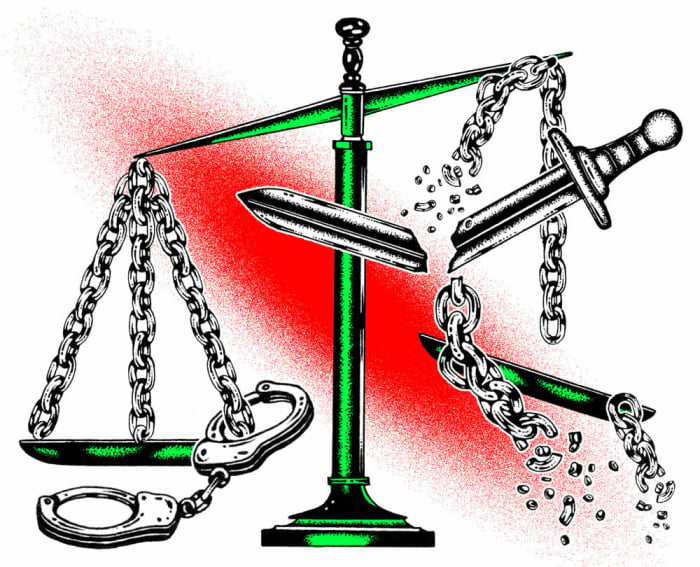 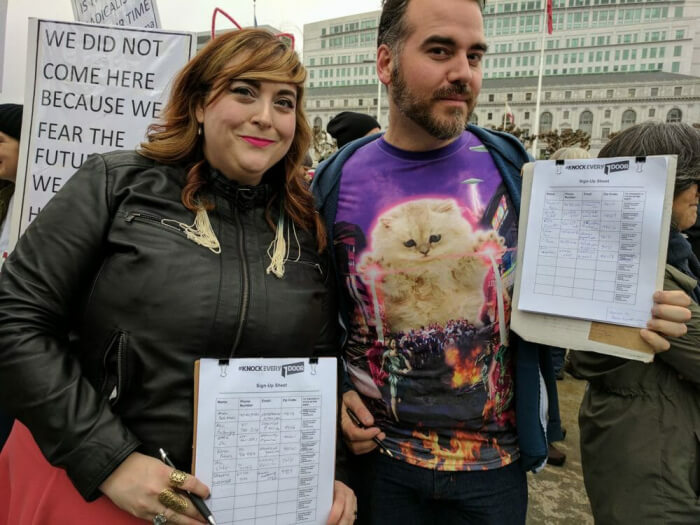