I’ve been lurking in a restaurant in the center of the city, the luxurious kind, with a staff in custom uniforms. They ask you who you are when they take you to your table. When the server comes, he calls you by your name. I paid fifteen dollars for an appetizer salad there. I’m not proud.

It’s a Republican joint, or at any rate, it is where the upper crust Republicans of Philadelphia have been taking refuge this week while Democratic delegates and the liberal press corps occupy half the venues in the city.

The restaurant is only a few blocks from City Hall, where almost every march of the past week has convened and taken off, headed for Independence Hall, or FDR Park, or the Wells Fargo Center—there are major streets in each direction. As a result, the whole area has been filled during daylight hours with protesting types: hippies and peaceniks, socialists carrying red flags, little Revolutionary Communist Party cliques walking lockstep in black T-shirts to stir up trouble. Even when nothing big is afoot, there are a few folks standing around, like some kids holding NO OLIGARCHY signs, shouting to anybody who will listen that Hillary Clinton is a war criminal.

The first day I spent in the bar, a march against the drug war was headed south from City Hall. They were carrying enormous inflatable joints over their heads, at least a hundred feet long, and you could see them drifting down the street from the restaurant’s windows. A couple sitting next to me—GOP operatives, they’d spent the past hour talking about a House race they were working in New York that they thought might be an upset except the candidate was proving difficult to control—looked up. The man shook his head. The woman chuckled. “Oh God,” she said. “At least Republicans don’t do that.”

It’s a popular belief: Right-wingers don’t protest like their left-wing counterparts. They haven’t got the same organizing culture, the same history of mass action—it doesn’t match their temperament so well. Our history is not marked by right-wing sit-ins or right-wing marches. There are no symbols of right-wing civil disobedience commemorated by national holidays, other than the Fourth of July. This is ordinarily justified with a kind of intuitive logic: The right, and particularly the Republican Party, represent the forces of reaction. They are the vanguard of the status quo. Even if they did march, what world would they be trying to overthrow?

There are right-wing protest movements, of course. The pro-life movement has, for the past several decades, staged some of the largest protests in the United States and picketed abortion clinics with a dedication that puts half the left to shame.

They are even here in Philadelphia. On Monday, when Broad Street and FDR Park filled up with marches, and more than fifty left-wing protesters were arrested attempting to enter the Wells Fargo Center, a Christian life contingent occupied the far side of the “free speech zone,” surrounded by a solid wall of outward-facing cops and arguing with Sanders dissidents. “I’m not smart,” one shouted into a megaphone. “In fact, I’m probably dumber than you. But I’ve got the Lord’s Grace. I know the truth revealed in holy scripture.”

They’re not the only ones. As the left has staged its actions at the Democratic National Convention—delegate walkouts and perimeter sit-ins and march after march in defiance of every perceived failing of the Democratic Party—a small but solid number of right-wing dissidents have arrived to get in on the action.

There are the men with buzzcuts and black T-shirts reading “WHO IS RON PAUL?” who hang around the anti-war groups, shouting about the real movement against American imperialism.

There is the Russian woman I meet on the outskirts of a climate march, who shakes her head and talks to passing marchers like a mother trying to stop her sons from making a terrible mistake: “You are calling for socialism,” she says. “But you have not seen it. I have seen it, and it will not save you.” She tells me that this is not the first rally she’s crashed—she’s not even from Philadelphia. But she feels that she must “tell people the truth about the Soviet Union” before it’s too late, a truth she says Americans have forgotten.

There are the seven or eight locals who unfurl a Trump banner in the protest zone on Wednesday night, marching around and attracting a crowd while Joe Biden speaks inside.

There is the man who has set up a little tent outside the Pennsylvania Convention Center, halfway across town from Wells Fargo, with signs demanding that Democrats defend the Holy State of Israel. He isn’t Jewish, he tells me, but Israel is the only country “fighting the barbarians over there.”

These right-wingers are not nearly as well organized as the leftists in town. They aren’t numerous. But they aren’t the vanguard of the status quo either. Like the typical abortion picketer, they do not come from the upper crust of their party. They are, in their own way, dissidents, compelled by frustration and urgency to come out in the streets and press their case despite the heat. Like the Bernie or Busters and the environmental activists and the migrant justice marchers in the park, they believe that they are in possession of some vital corrective, one that the powers who manage our political lives do not want getting out there. They do not come from the business wing of any party. Like the Democrats and socialists out here, they are yelling in the shadow of the Wells Fargo Center: Brought to You by Comcast.

That isn’t to say that they’re equivalent. Similarity of status or of tactics does not entail similarity of moral clarity. But let us say what’s obvious: the impulse toward protest is not particular to reactionaries or revolutionaries. It is a matter of power and its absence.

On Wednesday, on the convention perimeter, I find a middle-aged woman in a wide-brimmed hat. She’s wearing a Trump button on her shoulder, and she’s heckling passersby. “Ask a small business owner what they think of socialistic ideas from Hillary Clinton!” she says to a passing reporter, who is on his phone and ignoring her.

I ask her why she’s here, and she tells me she lives nearby. She wanted to come down, she says, to “tell the Democrat Party what it’s like to run a business.” What kind of business does she run? I ask. “You wouldn’t understand it,” she says.

We’re on the north side of the perimeter, the furthest point from the Wells Fargo Center. Beyond the black gate is an enormous parking lot, dedicated almost entirely to drivers who are waiting to pick up convention-goers from the Uber tent on the grounds. Beyond that, there are signs directing delegates to the Xfinity food and beverage lounge, a detour before the ramp to the convention center entrance, where the Comcast logo looms larger than the “Democratic National Convention” sign. Inside, protesters are shouting “No more war!” at Leon Panetta, but they are quickly drowned out by the majority chanting “USA.”

Perhaps it’s true that Republicans do not protest so much because Republicans, by and large, are representatives of the status quo. But it should worry Democrats that this small business owner—who ultimately admits she’s a birther, and who eventually tells me that her business is a number of babysitting clients—has well more than half a point about what is going on here.

The upper-crust Republicans protest too, in their own way.

Sitting at the restaurant bar a few days after the enormous inflatable joint protest, I find myself next to an old man in a three-piece suit, napkin tucked in like a bib. He’s eating shrimp, he’s got beautiful cufflinks, and he’s heckling the shit out of CNN.

On a small television over the bar, the news has just announced that all charges will be dropped against the Baltimore police officers who murdered Freddie Gray. A panelist talks about injustice. Oh, who gives a shit, protests Cufflinks. He was a degenerate drug dealer trying to sue, who the hell cares?

I offer that Gray’s family may care.

Oh, who cares about his family? He says, If you’re an upstanding productive citizen, you’re fine. Otherwise you get what’s coming. This guy was thug. He pauses. He’s got a lovely silk pocket square, precisely the right shade of red. What? You think everybody’s equal? He takes another bite of his shrimp. 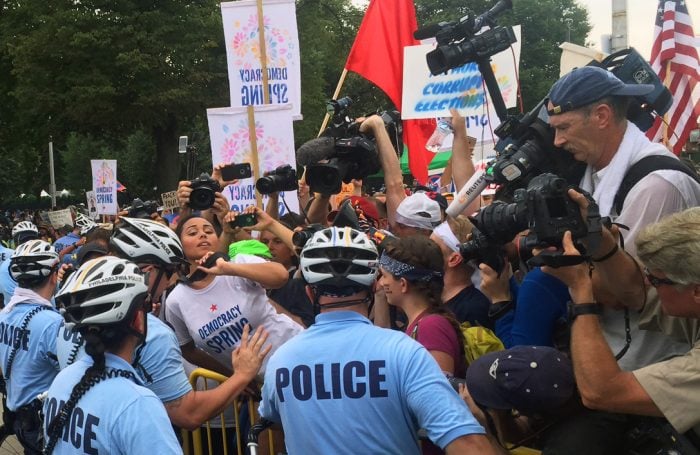 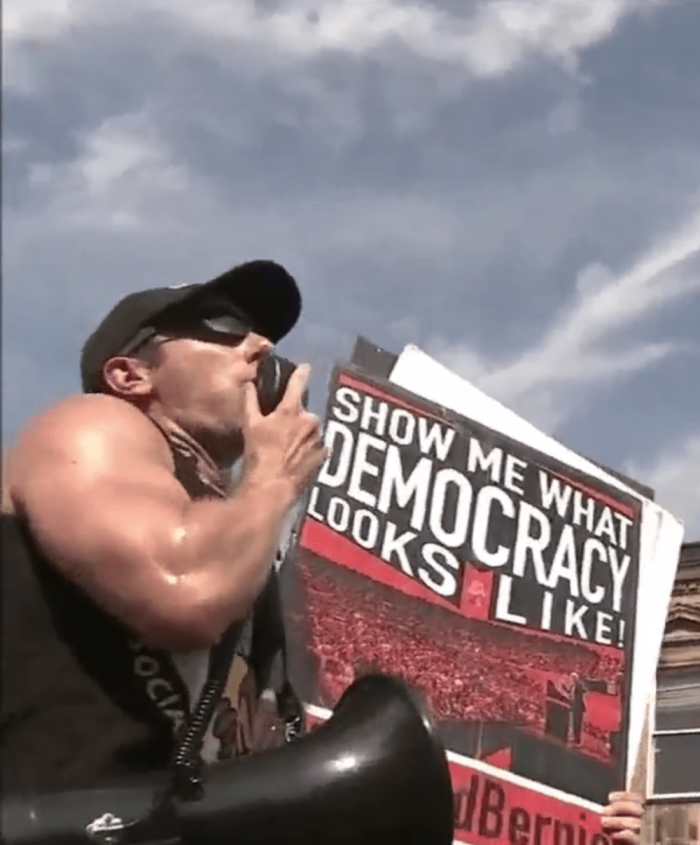 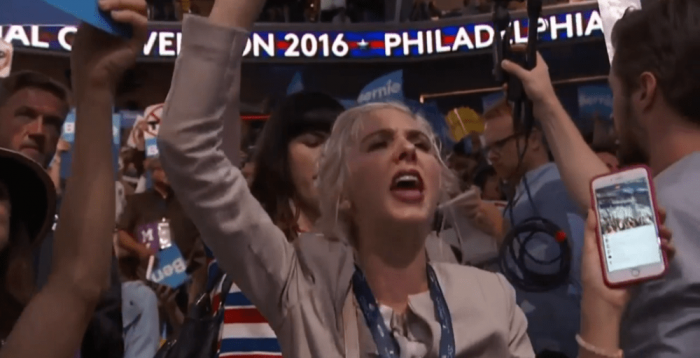