It is cold. The apartment smells of darkness and damp. Andreas Ban switches on all the heaters and all the lamps. He climbs up to look at the electricity meter, it is spinning vertiginously. Andreas Ban smiles. He pours himself a grappa with rue and sets off limping down the hallway, swinging Victor’s plastic bag. He waits for the warmth to pour over the parquet and lick at the walls. An hour passes. Andreas Ban settles into his gray armchair, takes the dried belladonna leaves out of Victor’s bag, crumbles them and fills his pipe. The pipe was handmade by the renowned Emil Chonowitsch in the 1970s, it has the trademark chonowitsch–denmark, handskaaren. Andreas Ban was given the pipe in 1975 by the psychiatrist Erick Aho of Geneva, when Andreas Ban was there on a one-year training course in clinical depression, anxiety and phobia. Andreas Ban does not normally smoke a pipe. Back then, Erick Aho was packing up his life. His wife had walked out, taking their two daughters with her and selling their furniture. Erick Aho was left in an empty house with five or six camping chairs, a low plastic folding table and four blow-up mattresses. It was at that table that the psychiatrist Erick Aho sketched out his battered past for the psychologist Andreas Ban. Their backs were guarded by tall white bookshelves with no books. In a corner lay children’s toys, some blocks, dolls and soft toy animals with no limbs. Through the dirty windows a garden with a swing could be seen. The lake was not visible. I have a great collection of pipes that I no longer need, said the psychiatrist Aho. Here’s one for you, it’s elegant and sits nicely in the hand. That is how Andreas Ban came by a pipe. Now he puffs at it.

Andreas Ban goes to the kitchen, his gait—stable.

Andreas Ban shakes half of Victor’s belladonna berries, some fifty of them, into a yellow porcelain Chinese dish as fine as tissue paper, almost transparent. Big blueberries, he says. He sprinkles sugar over the berries and goes back to his armchair.

Andreas Ban eats the sweetened belladonna berries. Slowly, one by one, six of them.

The pain in his back eases.

In the distance someone whispers. Who is whispering? The voice is familiar but distorted. Andreas Ban never mistakes voices, Andreas Ban recognizes voices perfectly, he does not need faces. The voice comes closer, slips under the door and rises, stands upright and sways. Why is it swinging? It is a voice in lines, a voice resembling a prisoner, except that its stripes are red-black with little green dots in between. I am a musical voice, says the voice. Andreas Ban recognizes the voice of Strauss. His mouth is full of saliva.

Pain in his eyes. Pulsing in his eye sockets. His eyes sting. The light sends arrows like the prickles of little albino hedgehogs into their whites. His lids flutter. They will not close.

I am a musical voice, says the voice.

Someone switches on the radio. Stalin is speaking. Stalin’s face grows in Andreas Ban’s room, swells like a balloon, hovers. Through the closed windows enter gigantic crabs. We’re Stalin’s crabs, they say, we’re the Red Army of Stalin’s crabs, red royal crabs. We come from Norway, they say, and we are going to Gibraltar. There are ten million of us, we are indestructible. The crabs cover the room, crawling, each weighs at least five pounds, the span of their pincers is more than three feet. One clambers onto Andreas Ban’s chest. Andreas Ban gets up with difficulty. I’ll nip off your nose, says the crab on his chest, I’ll gouge out your eyes, I’ll break your hips. The other crabs are devouring the room. What was left of the room. They devour the empty shelves, the chest of drawers, the crystal mirror in its gilt frame, they devour Andreas’s rocking chair, the one made of black bamboo.

Piercing pain in his ears. His parotid glands pulsate, swell. An unbearable din in his head.

The tip of his nose tickles. His nose is red and swollen, blood drips from it.

Andreas Ban would like to say something, words will not come out. They come in waves, from his stomach, a whole ball of hairy words rolls in Andreas Ban’s mouth as though he is about to vomit but they just fall onto his tongue and sink.

The radio comes on suddenly. Out of it leaps a Chinese circus with two monkeys and a little curly-haired dog. The Chinese have pigtails and they sing women’s opera arias. Andreas Ban cannot decipher them, a great din.

Pain in his teeth. His gums itch, bleed. His teeth chatter.

The twenty small bald tortoises raise their heads at the same time and stare at Andreas Ban.

His tongue is growing. It is like a gigantic strawberry. Pain in his spine.

Pain in his stomach. He cannot cough.

Pain in his rectum.

A window pane shatters, a miniature bronze Glenn Gould falls at Andreas Ban’s feet from the sky, he takes a white piano and his piano stool out of his back pocket, and starts playing Brahms in yellow gloves. You’ve warmed the room up brilliantly, he says, I like it like this. That lasts a while.

Then a flood. Andreas’s living room is transformed into a lake. The lake fills, grows, on the surface of the lake float heads from Andreas’s albums. They bob around. Some heads have open eyes and they blink, others just look, some have no eyes at all. No one smiles. There are young faces and some very old faces.

Andreas Ban has shat himself. A thin green stool spreads over his behind, slips down to his knees. Andreas wets his pants. Worms wriggle in his penis.

On the floor lies an enormous treble clef, splattered with muddy earth. The tremble clef stands up and twists, in spasms. It dances. My name is Tranquility, it says. I was exhumed in Transylvania. Three times.

A shaggy white dog lifts its leg and pees against the wall of Andreas’s room. The wall cracks, opens, and out of the wall come Andreas’s father and Andreas’s mother. Put on a waltz, they say. No music. Andreas’s parents spin in silence, then they stop on a chocolate cake, he is wearing a white tuxedo and she a crimson evening gown. The white dog is sleeping on the rug that Glenn Gould has neglected to take away. Shall I make you a kilt? Andreas’s mother asks him, Scottish, she says. Andreas falls onto his knees and eats the dog’s food out of the silver dog bowl.

His testicles are hard. Swollen.

His breathing is uneven, spasmodic, rapid. A rasping cough causes pain in his left hip. Andreas Ban spits out a blood clot.

Palpitations. His heart drums in his head. His heart swells uncontrollably.

A hearse carries a coffin to an open grave. The road is rutted and the coffin jolts at an indecorously crooked angle. A yellow brocade cover with gold tassels pokes out of the coffin. The cemetery has hillocks overgrown with mauve grass. Through the cemetery float boats full of shoes. A blackbird lands on Andreas’s shoulder. Those are the shoes of the citizens of Sarajevo, the blackbird whispers. Out of the shoes sprout sunflowers.

His knuckles are shiny, streaked with red lines, they rise like dough.

Jerking of his arms and legs.

Waterfalls gush down the windows. Out of the floor rises snow, it winds like a stalk and moves toward Andreas. It wraps around him, he is tied in snow chains, he cannot breathe.

I am an immortal unicorn, I am looking for my lost brothers who are lying at the bottom of the sea, says a blue animal speckled with little gold stars. Andreas Ban removes the gold stars, one by one, from the blue unicorn, and sticks them over himself. He is all golden and starlike.

His fingers are stiff. They tremble.

Shaking. Convulsions. His carotid glands pulsate. Madness in his eyes. His eyes are sightless.

Andreas Ban sways backward and forward like a paranoid schizophrenic. He waves, catches a ball, swivels his fingers, picks through wheat.

A young magician swings on a trapeze. Out of his hat fall ostrich eggs out of which leap: a football team of naked dwarf Hitlers, all the players lack their left testicle. Tiny black angels land on them singing:

Hitler had but one left ball,
Mussolini had none at all,
Stalin was three-ballin’,
That’s the dictators’ rise and fall!

The door opens, Arnold Schoenberg comes in. He is singing too:

Behind Schoenberg comes Steve Reich on tiptoe, Listen to my trains, he says. The trains sing, they thunder and sing, they tell stories, the space fills with journeys, tracks spread out and join, they have nowhere to disappear to, in them lies history. Bosch arrives with a basketful of Lilliputians under his arm. Bosch scatters the Lilliputians through the room as though they were marbles, the Lilliputians roll around making faces, they jump all over Andreas Ban, slip into his trousers, into his pockets, his socks, under his eyelids, they slide down his back and snatch his berries. The music stops. The trains stop. Andreas Ban defends himself from the Lilliputians’ attack, he yells, he screams, but produces no sound. A threatening dark silence reigns.

Then he loses consciousness.

Around Andreas Ban dance Parca moths. Andreas Ban lies on the floor, soiled, wet and blind. The room is in darkness.

Three days have passed. Clotho and Lachesis wave their wings and say, Our work is done, bye-bye. Atropos lands on Andreas Ban’s heart, out of his bosom he takes a pair of scissors, hugs them, raises them up high and says, This should be the end.

Andreas Ban stirs. He slithers on his belly to the toilet. He pushes his finger into his mouth. He vomits. He drags himself to the kitchen, half fills a glass with dishwashing soap, dilutes it with water and drinks it. He vomits. He drinks a glass of diluted vinegar, vomits. He crawls to his medicine cabinet, dragging after him trails of vomit and green shit, he is wet and blind. Among his medicine he feels for his carbo medicinalis tablets, crushes ten of them with his teeth and swallows them. His throat is full of dust and tight.

Then he calls an ambulance.

Daša Drndić is a Croatian novelist, playwright, critic, and author of radio plays and documentaries. Trieste, her first novel to be translated into English, was shortlisted for the Independent Foreign Fiction Prize in 2013. Her latest novel is Belladonna (New Directions). 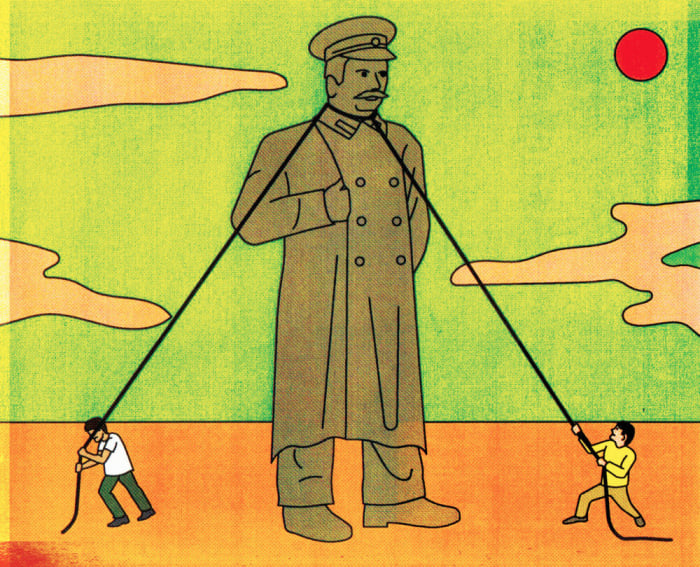 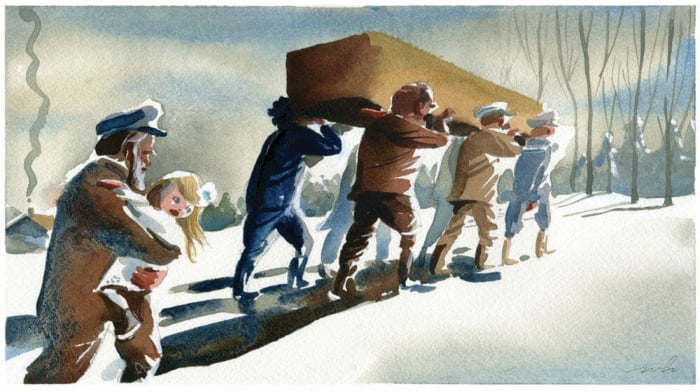 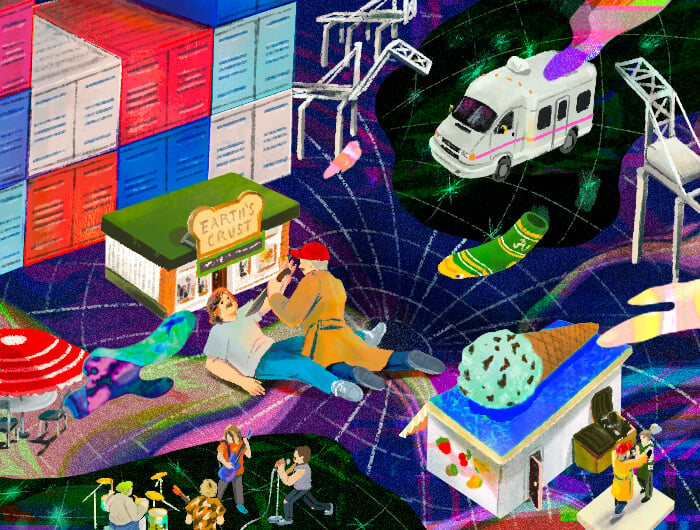