On Memorial Day, the Fresno Grizzlies, a minor league baseball team, played a video between games of a doubleheader. Various images flashed across the big screen: the Statue of Liberty, a space shuttle launch, the Constitution, and Donald Trump. Ronald Reagan’s first inaugural address was the soundtrack.

The video would have been lost to history, one of many casual expressions of jingoism at sporting events, had it not been for the other contemporary political figure slipped into the frame.

“As for the enemies of freedom, those who are potential adversaries, they will be reminded that peace is the highest aspiration of the American people,” Reagan said as images of Kim Jong-Un, Fidel Castro, and Alexandria Ocasio-Cortez, the twenty-nine-year-old star congresswoman, faded into one another.

The video, understandably, sparked a backlash. “What people don’t (maybe do) realize is when orgs air these hateful messages, my life changes bc of the flood of death threats they inspire,” Ocasio-Cortez tweeted. The Grizzlies, the Class AAA affiliate of the Washington Nationals, soon apologized, claiming they had not viewed the video in its entirety beforehand. The ballclub lamented that a video that was “supposed to be a moving tribute” had ended with “some misleading and offensive editing.” Sponsors dropped the Grizzlies.

After the outrage, most people, including Ocasio-Cortez, moved on. It was generally understood that it was bad practice to compare a freshman Democratic representative to a couple of longtime dictators. Ocasio-Cortez dethroned a congressman and supports drastically cutting carbon emissions, not abolishing freedom of speech or starving the citizenry. This moment of virality would go down as another example of how absurd and terrifying the hatred of Ocasio-Cortez among the right has grown.

To enter a professional football stadium, ballpark, or arena is to be confronted with a pageant of militarized patriotism that is omnipresent and unyielding.

The Fresno Grizzlies would not apologize for the rest of the video, and Ocasio-Cortez and the media didn’t bother to comment on three minutes and thirty-five seconds of unabashed celebration of violent combat at a sporting event. Like rush hour traffic, it’s a far too common occurrence to be deemed worthy of serious attention, let alone condemnation. Roland Barthes wrote of myths, the tendency of modern society to imagine otherwise remarkable creations or phenomena as God-given, a part of our natural order.

Guns at the ballgame can be added to the list. What is it about American sports and war? To enter a professional football stadium, ballpark, or arena is to be confronted with a pageant of militarized patriotism that is omnipresent and unyielding. Field-sized American flags, jet flyovers, military appreciation nights, the singing of “God Bless America,” and camouflage are commonplace. Veterans, in uniform, are singled out for attention on the jumbotron. They throw out first pitches. We applaud.

Undoubtedly, 9/11 drew American professional sports and the military closer, though they have natural affinities that have elevated the blending of athletics and the military-industrial complex to the level of myth. American football is a war simulation, as George Carlin pointed out in one of his most famous bits. Defenses blitz, quarterbacks throw bombs, and incredibly large men crush each other on every play, destroying their bodies for our amusement.

The hierarchy and conformity of military culture is prized in sports. Colin Kaepernick did not just offend the sensibilities of conservative fans when he kneeled for the national anthem to protest police brutality against black bodies; he reminded the fanbase he was an individual person with thoughts and beliefs who was capable of direct action not prescribed by any coach or billionaire franchise owner. He did not operate from any playbook, and he would not shut up when he was told to shut up. Had he disobeyed orders in the military, he would have been court martialed. In the NFL, the white ownership did the next best thing—they refused to give a quarterback who had led his team to a Super Bowl another job. Kaepernick’s life as a football player was soon over. 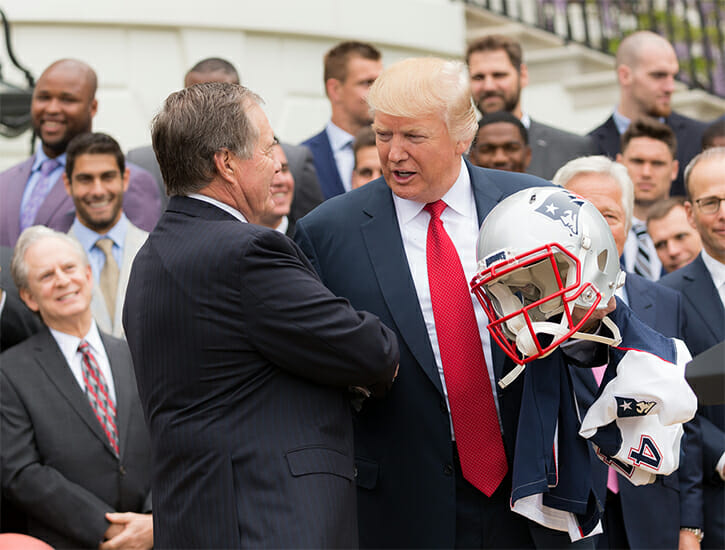 The NFL is a majority black league, its players increasingly restive and politically aware. As Trump reminded us, the league’s fanbase is very different, concentrated in white southern bastions that handed him his most commanding victories. The owners are largely sympathetic to Trumpian politics. If the greatest existential threat to the NFL, the world’s most militarized sport, is the number of talented young men who will soon decide they’d rather shag flyballs or shoot hoops than endure early onset dementia and obliterated joints, another looming challenge is the inevitable clash between those who play the game and those who watch it and own it.

Fans will cry out that they don’t want their sports and politics to mix. Just smile, take your snaps, and be grateful you are earning a living playing a child’s game. But that’s naive. There is little more political than glorifying the toting of killing weapons in a foreign land. 9/11, the worst terrorist attack on our soil, rekindled the savage patriotism of the Cold War and made it darker. The Soviets spoke a funny language and spit Ivan Drago at us; terrorists were hidden and everywhere, we were told, and the war against them had no end date because how does one slay an ideology? One invasion at a time.

I remember, as a fourteen-year-old playing for my local baseball team in New York City, an American flag sewn to my chest. We all had the flags. Just a few years after 9/11, flags were everywhere, on cars and windows and stoops. My team, the Yankees, had added the singing of “God Bless America” to the seventh inning stretch, showing military veterans with regularity on the big screen. A bald eagle—real and live—would often fly through the stadium. If this all made me uneasy, it was rare I would vocalize my feelings outside the comfort of my own home, where my father taught me at a young age the Founding Fathers were slave-owning capitalists and even the great Franklin Roosevelt locked the Japanese in internment camps.

After 9/11, the world was our battlefield, and while men and women not much older than me were dispatched to die in the forever war, sports arenas evolved to remind us, like George W. Bush’s brain-trust, that it all had a purpose, that we were a beacon of freedom in the lonely, blood-drenched night. Morning was around the corner, one or two or fifty bombs away. If we were singing “God Bless America” and saluting our heroes at halftime, we could erase the reality of a decimated Iraq and an unwinnable Afghanistan. Innocence could always be manufactured anew.

The question, then, is whose politics are allowed onto the field.

If the culture of sport and the culture of war are siblings, or simply mirroring each other, why don’t we care? Why do we readily accept the infiltration of war into a place of leisure and what is it about war that renders it, in the eyes of many sports fans, beyond politics? When war is so readily blended into everyday life in only its most glorious form, bloodless victory, we are inured to its horrors, instructed that it is all necessary for the privilege of watching a bat strike a ball. The pageantry is ultimately ahistorical. All wars are the same, all were justified, and all were fought for the safety of the American people, defensive measures against a heinous enemy. When the military is brought to the ball field, turf, or court season after season, the subtext is the eternal war, and its perpetual justification.

Each day, liberals will bemoan the “normalization” of Trump and tell us fascism is in our midst. They are quieter on the far more insidious normalization that has happened in this country under three different presidents. We have come to accept the terms of a nation always at war, a government, Democrat or Republican-led, that is willing to pour many billions into overseas conflicts and interventions and military bases in more than seventy countries. We accept that the United States needs a defense budget roughly the size of the next seven largest national military budgets combined. Back home, in camouflage jerseys and propaganda videos, this acceptance penetrates our days and nights at the stadium. There is no escape. This is closer to fascism than most would like to admit.

There is nothing wrong with honoring military veterans and respecting the hellishness of their ordeals for the small salary the U.S. government provided them. As Bernie Sanders, one of the only presidential candidates interested in radically rethinking American imperialism, has said, we can honor veterans by giving them adequate employment, housing, and health care while keeping their descendants at home. This, though, is not the message of the sports arena. Fighter jets roaring through the sky are supposed to awe us. For the fans in Fresno who thought they were simply there to watch a ballgame played by men in their late twenties and fringe major leaguers, they were treated instead to politics in the extreme: Reagan intoning over images of American soldiers fighting in World War II and Vietnam, along with jets taking off from aircraft carriers and Navy SEALs emerging from the water, guns blazing. Politics, inherently, cannot be divorced from sports, not with the billions spent on it and the racial and class forces forever in play. The question, then, is whose politics are allowed onto the field. Teams are not staging teacher, nurse, sanitation worker, or artist appreciation nights. The San Francisco 49ers are not about to hold a Black Lives Matter day. The powerful people who make these decisions have already made up their minds. There’s a war to be won. 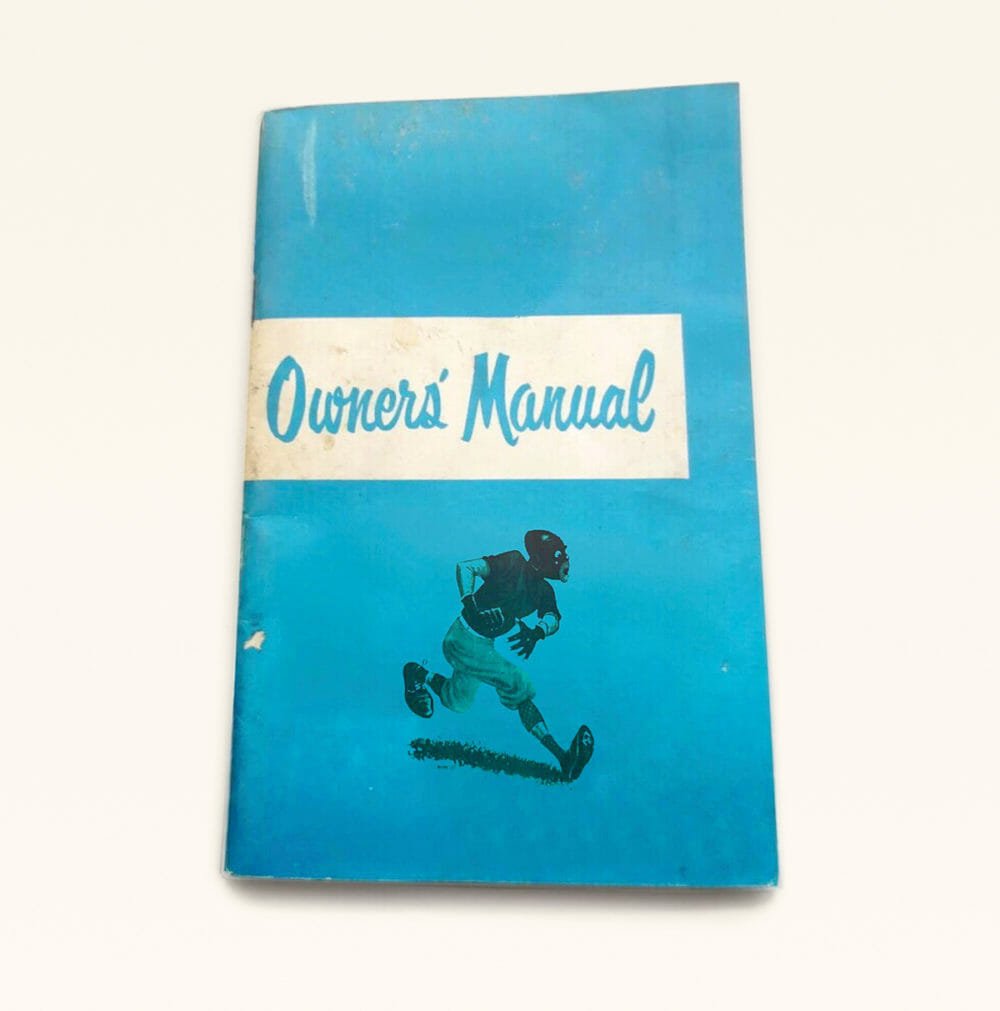 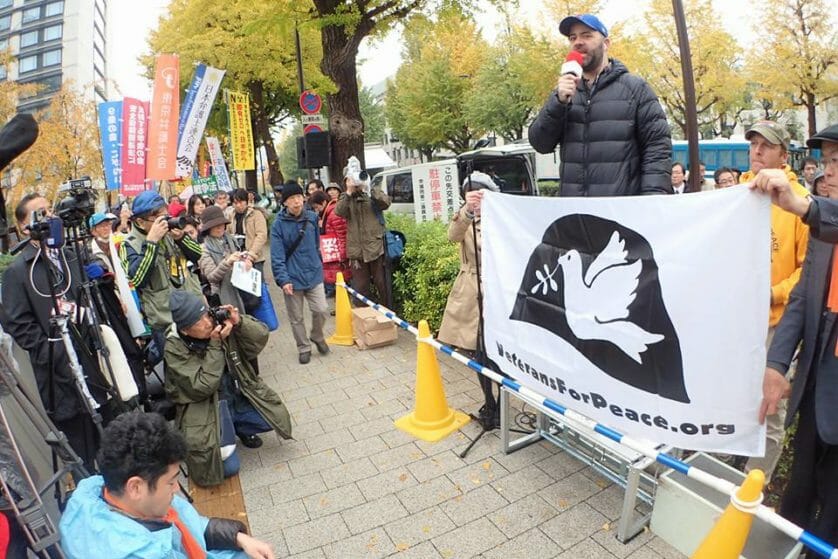 If All You Have Is a Hammer
Sarah Jaffe
Columns 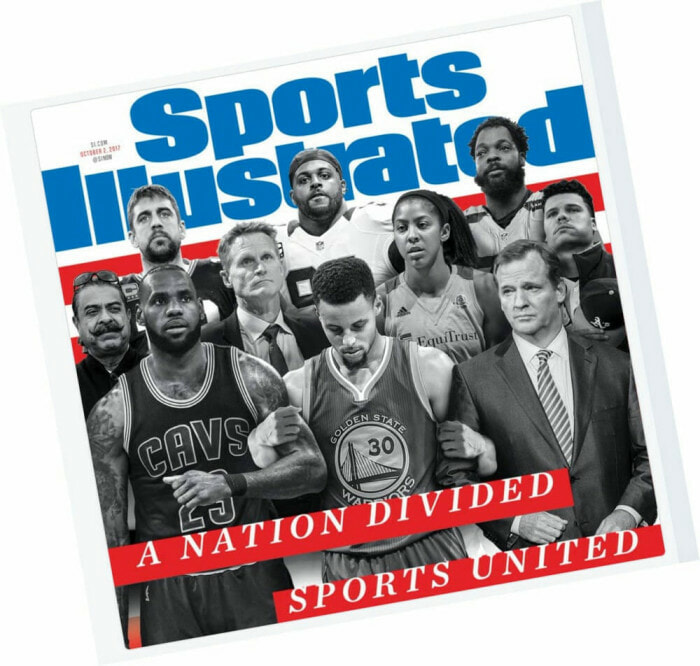 Together for What?
David Roth
Word Factory